Ever wonder what the most popular radio control items are? We have created a list of the top twenty most viewed items on Amain Hobbies.

The 20th most viewed RC item is one of the OG’s in the RC monster truck scene. It’s the Traxxas Stampede 2WD brushed monster truck. This 2022 version is special because Traxxas has increased power slightly, providing a 30 miles an hour speed rating from the waterproof electronics. There’s also a second new version of the Stampede that includes LED lighting, but it’s a bit more expensive. The non-LED spec Stampede is ready-to-run out of the box for only $170*. 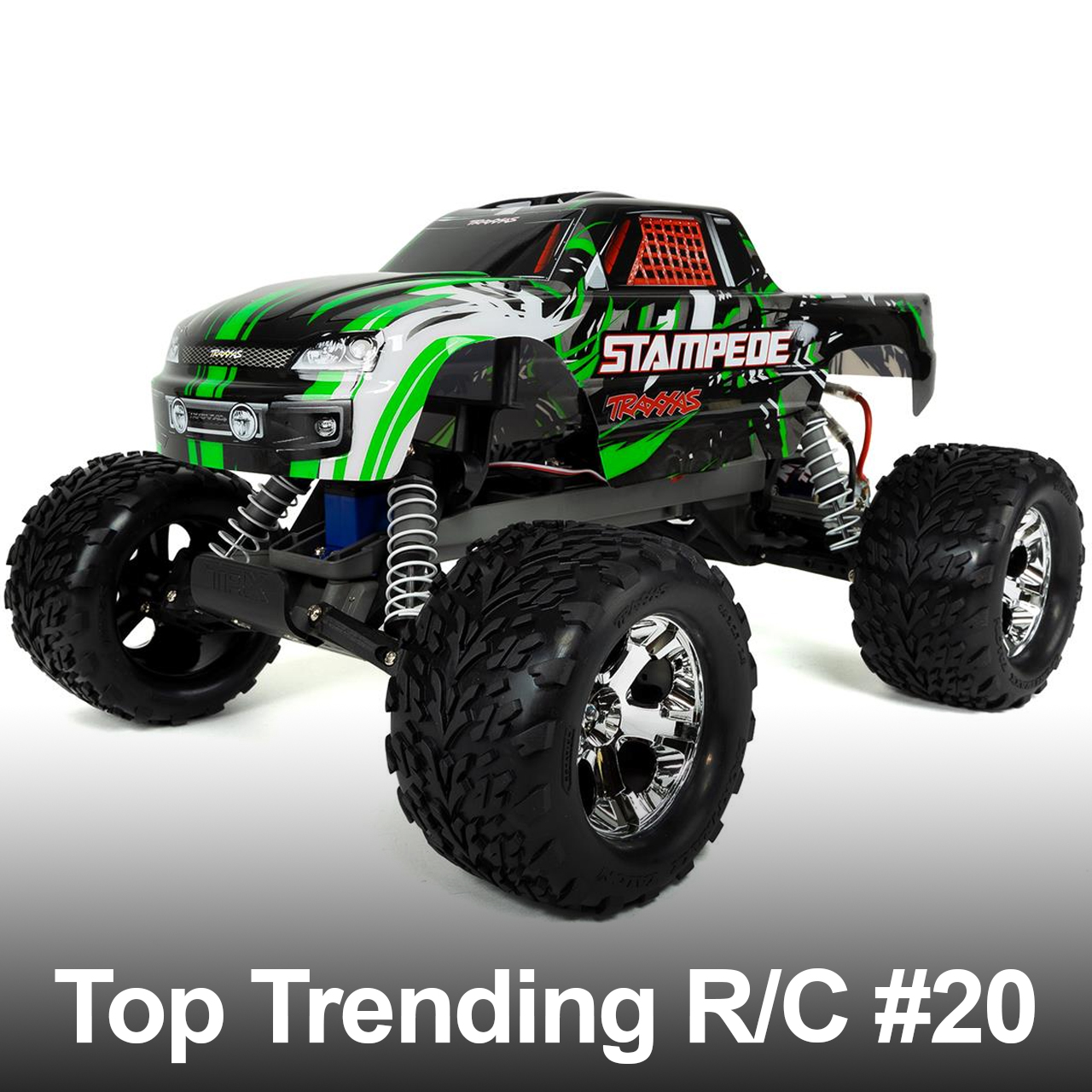 Number 19 on our list kind of took the RC world by storm when it was released and has become one of the most popular support truck options for other RC builds. It’s the CEN F450 Dually. This is the SD KG1 edition, which includes new color options and updates over the first model. Standard features solid axles, link suspension, licensed KG1 Trident D wheels, and a lifted custom truck look. There are also trailer hitches available for the F450; you can add a trailer of your choosing. You can get the ready-to-run F450 Dually in two colors for about $420*. 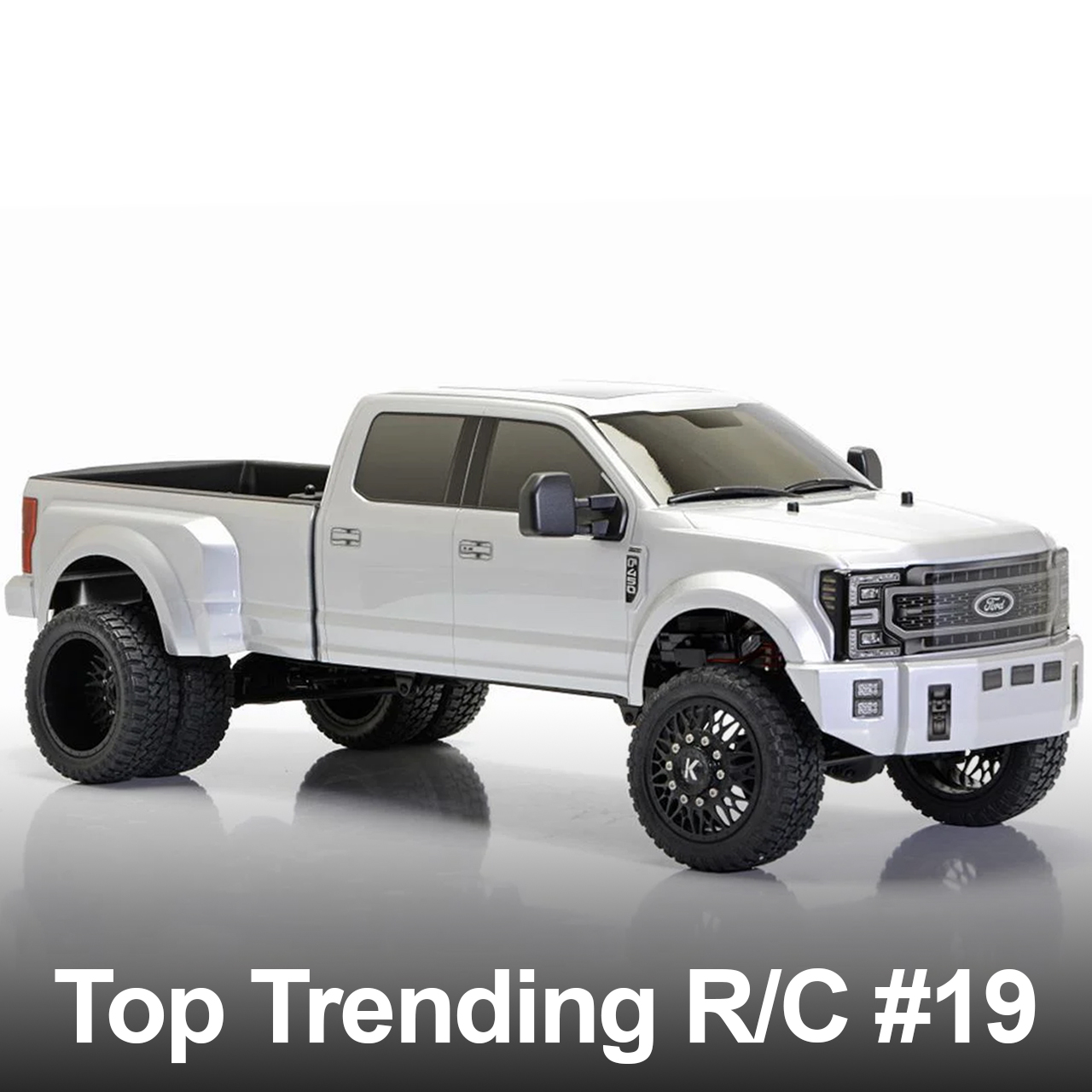 The competitive world of RC racing recently gained a few new cars, putting the brand new RC8B4-e from Team Associated on our list. This 1/8th scale off-road buggy is a kit that requires assembly. Alternatively, the RC8B4 Nitro Buggy provides the same 1/8 race buggy goodness for nitro engine use. The RC8B4-e buggy kit needs 4S brushless electronics and your chosen radio gear to get out and start racing one of the most prestigious race classes. You can find the RC8B4-e kit for about $670*. 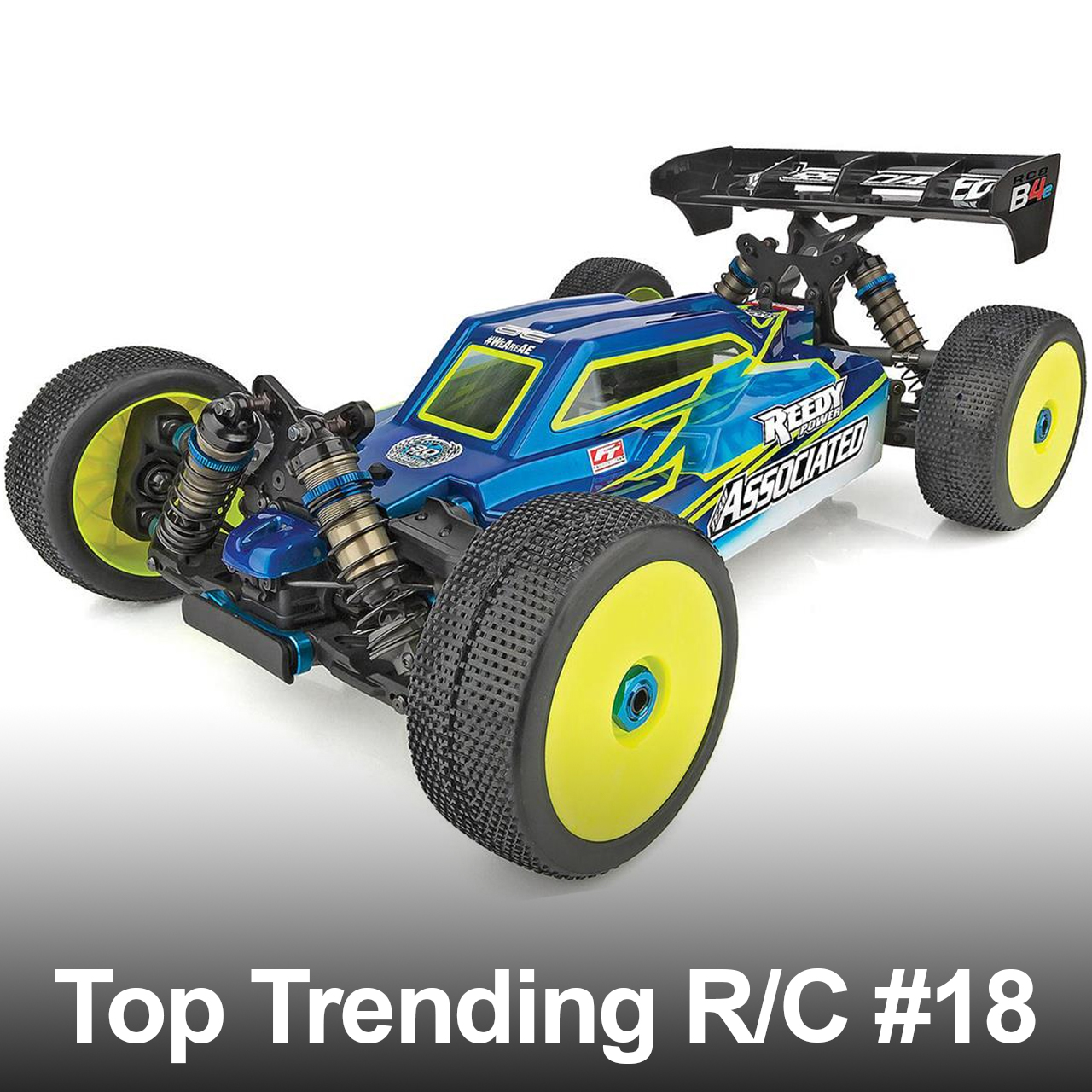 For on-road cars, the Kyosho EP Fazer Mk2 platform has been red hot, offering countless scale realistic cars, supercars, and muscle cars. So it should be no surprise that the 1970 Dodge Charger Supercharged Readyset is number seventeen on our list, and it’s one of the very few Mk2 on-road vehicles that include brushless electronics right out of the box. Plus, the 1970 Charger body style includes the option to configure the front headlight covers to open and close with a button on the transmitter. The Dodge Charger is ready to run and costs about $330*.

The next RC item on this list isn’t a vehicle, but, oh boy, is it popular—it’s the brand new Futaba 10PX 10-channel surface transmitter. At nearly $800, some of you are going broke just looking at this, but rest assured, it’s one of the most sophisticated and advanced radio systems available, not to mention one of the fastest. While most users will benefit little from such a sophisticated computer system, more advanced users and racers will find items like this to be one of the best RC investments you can make. The 10PX is available in two versions. 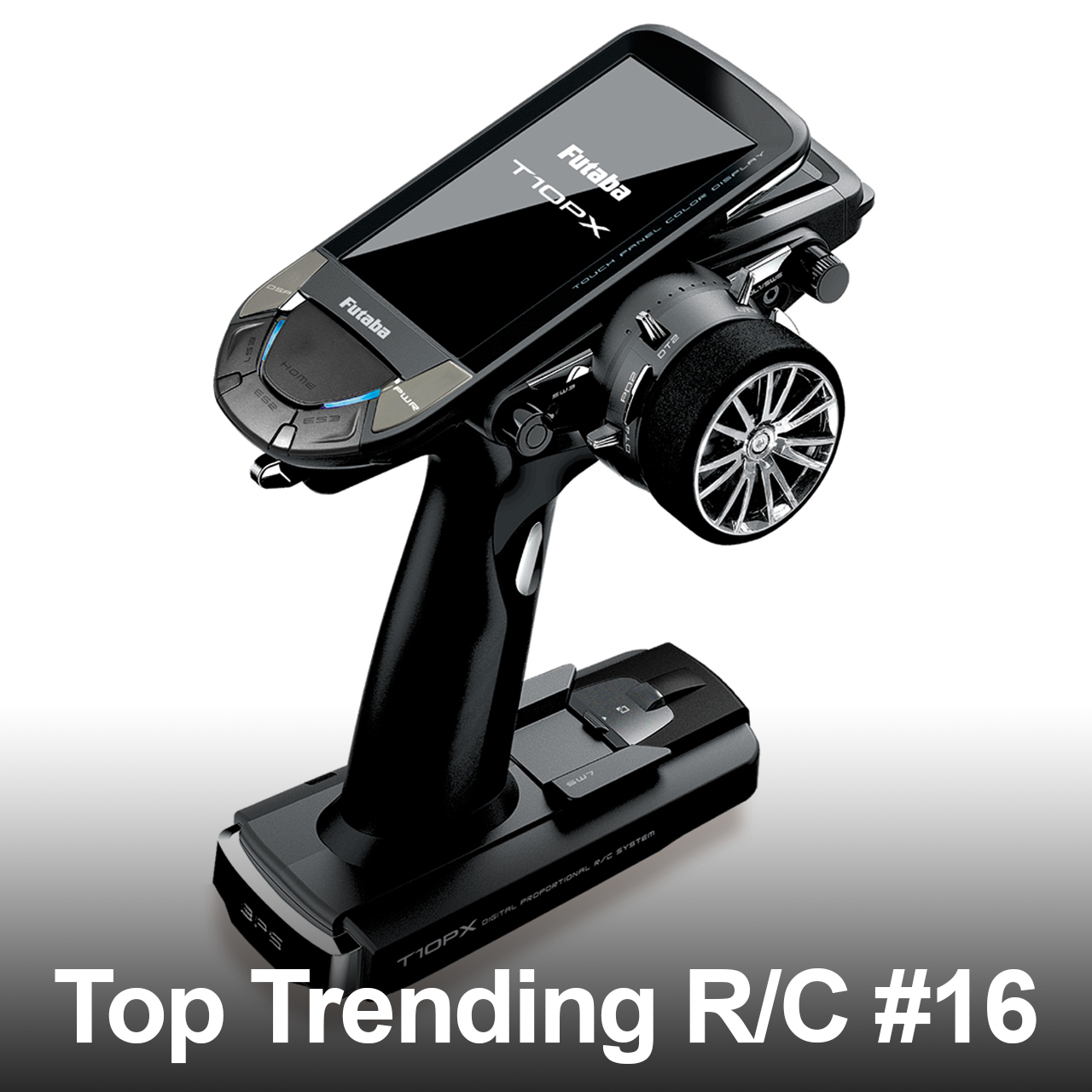 Up next is another brand new car for the collector, and it’s the Lancia Rally replica car from Tamiya. Now, this car is a kit that requires assembly, and it’s meant to be a replica of the Lancia Rally 037 racecar from the 1980s. It has a clear, detailed hard plastic ABS body atop a four-wheel drive chassis system. All the electronics will need to be added separately, except for the speed controller. The Tamiya Lancia kit is available for just under $200*. 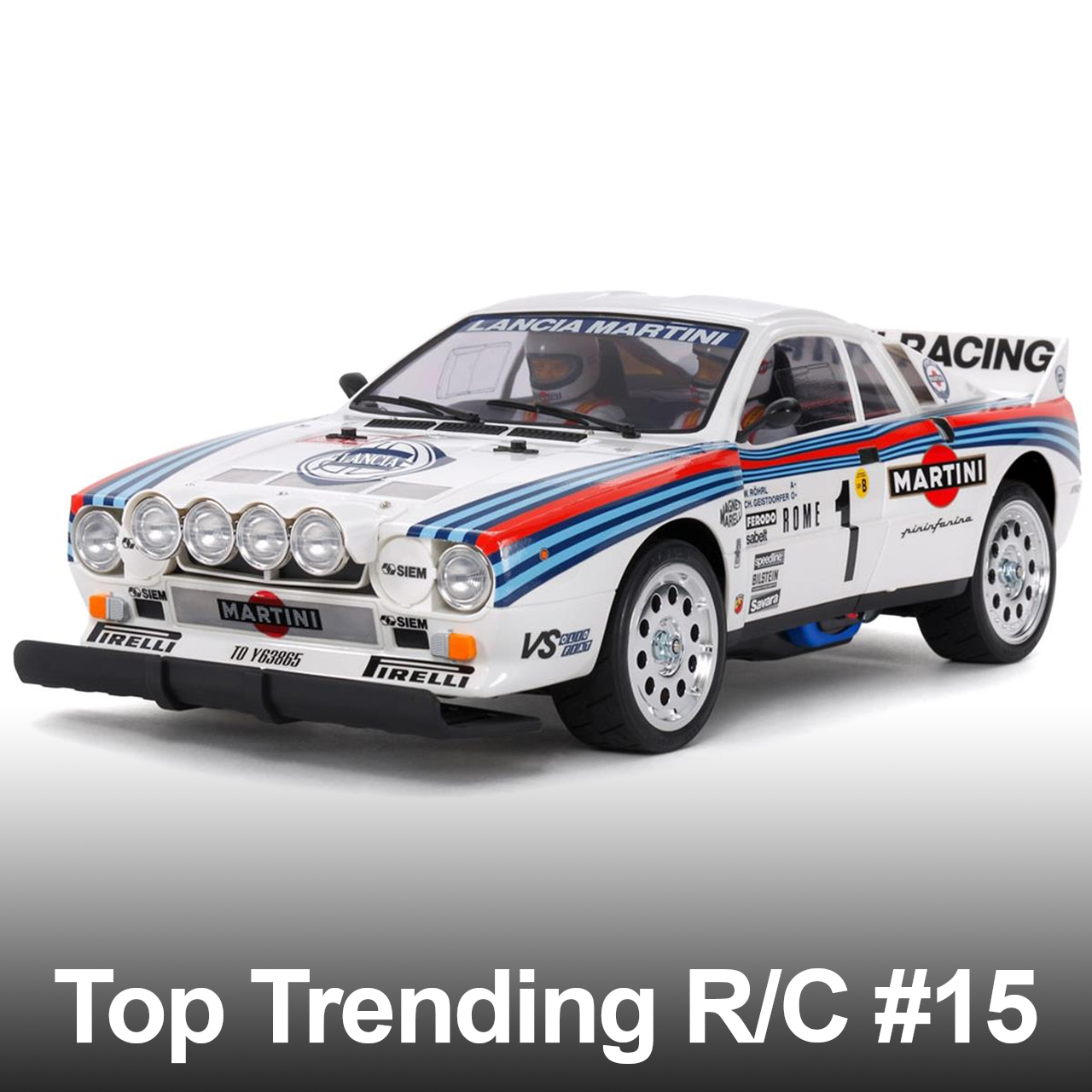 There’s little surprise that number fourteen is one of the newest and hottest 6S bashers available—it’s the brand new one 1/8 Traxxas Sledge. Now, we test drove this truck, beating the living Loctite out of it, and throughout all the abuse, it kept coming back for more. As a high-end luxury basher, the Traxxas Sledge offers some impressive engineering and the best clipless body fastening system we’ve ever seen. The Traxxas Sledge comes ready to run in four color options and costs about $800*. 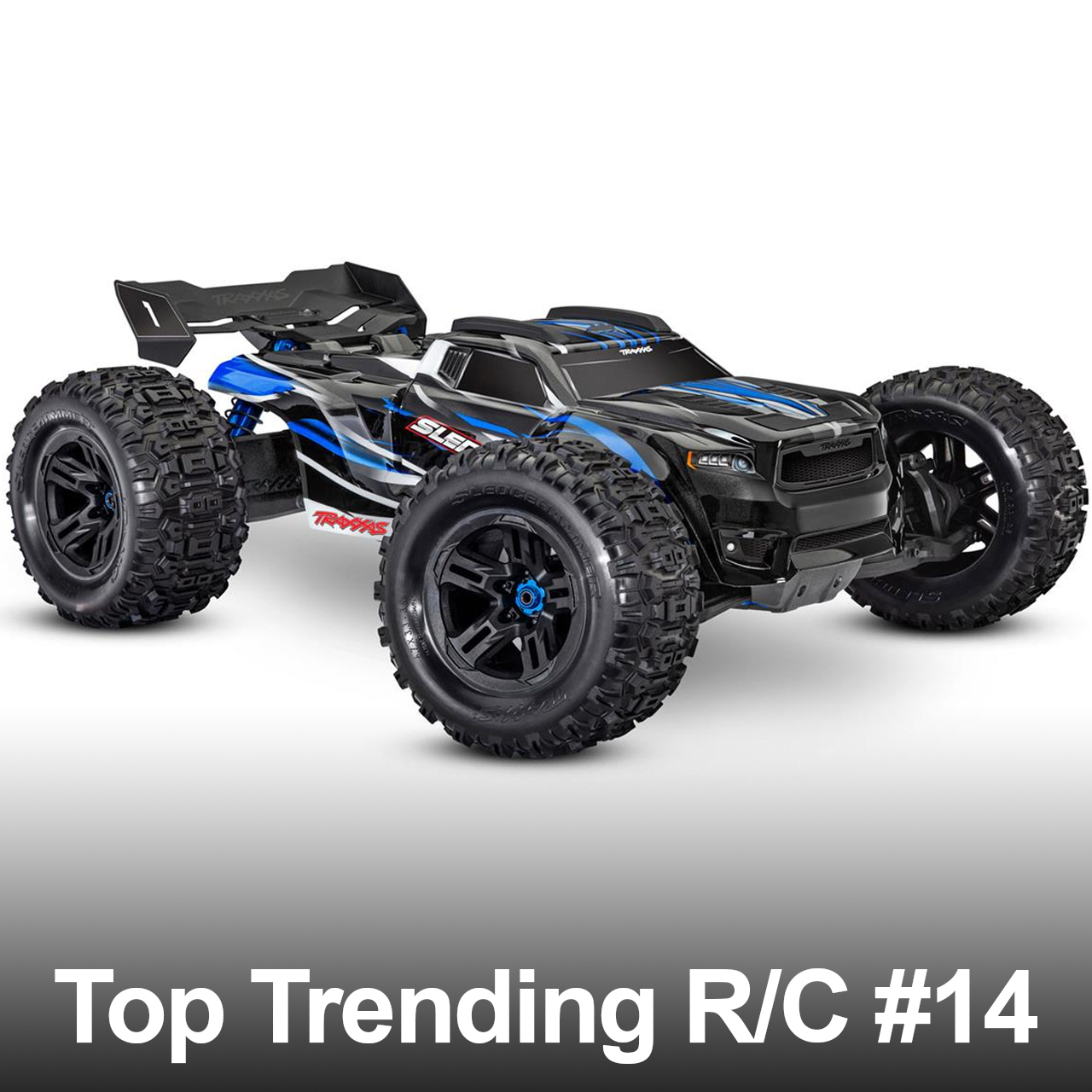 The next RC is all about attitude, looks, and scale realism. It is the one and only version of Ken Block’s world-famous Hoonitruck. This truck is 1/10 scale with a 4x4 drivetrain and brushed electronics. But the real gem of this platform is the scale lexan body that’s been officially licensed through Hoonigan Racing and outfitted with details and scale accessories to look as authentic as possible. The Hoonitruck comes ready-to-run in two versions with or without batteries and has a starting price of $390*. 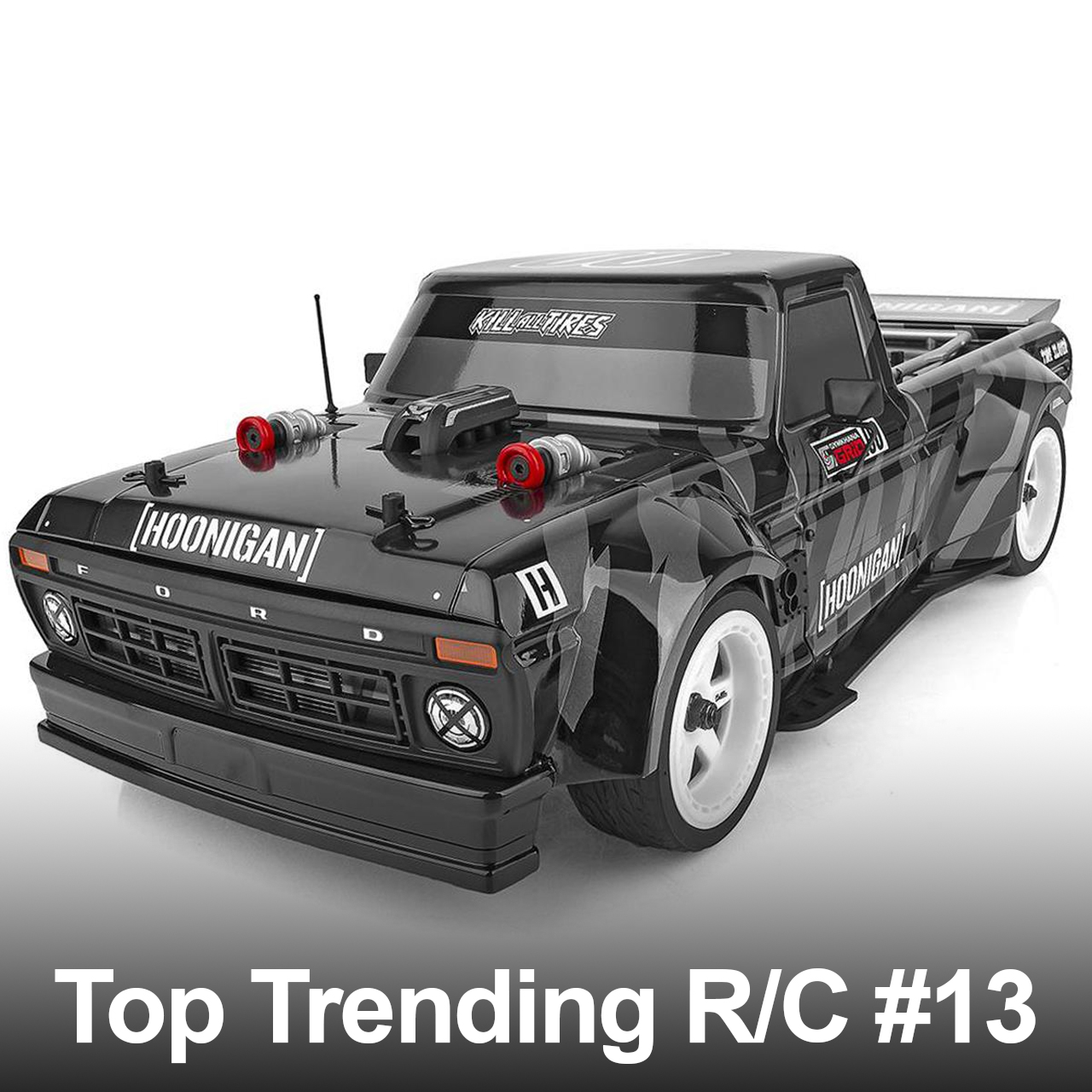 The twelfth most viewed product is another chassis kit from Tamiya. It’s the limited edition M-08R 1/10 scale race spec touring car kit. It includes many hop-ups and option parts that are typically sold separately. This limited edition kit comes with a mid-motor configuration and is rear-wheel drive. It requires assembly, a body, and all the electrical components. The M-08R kit can be purchased for about $305*. 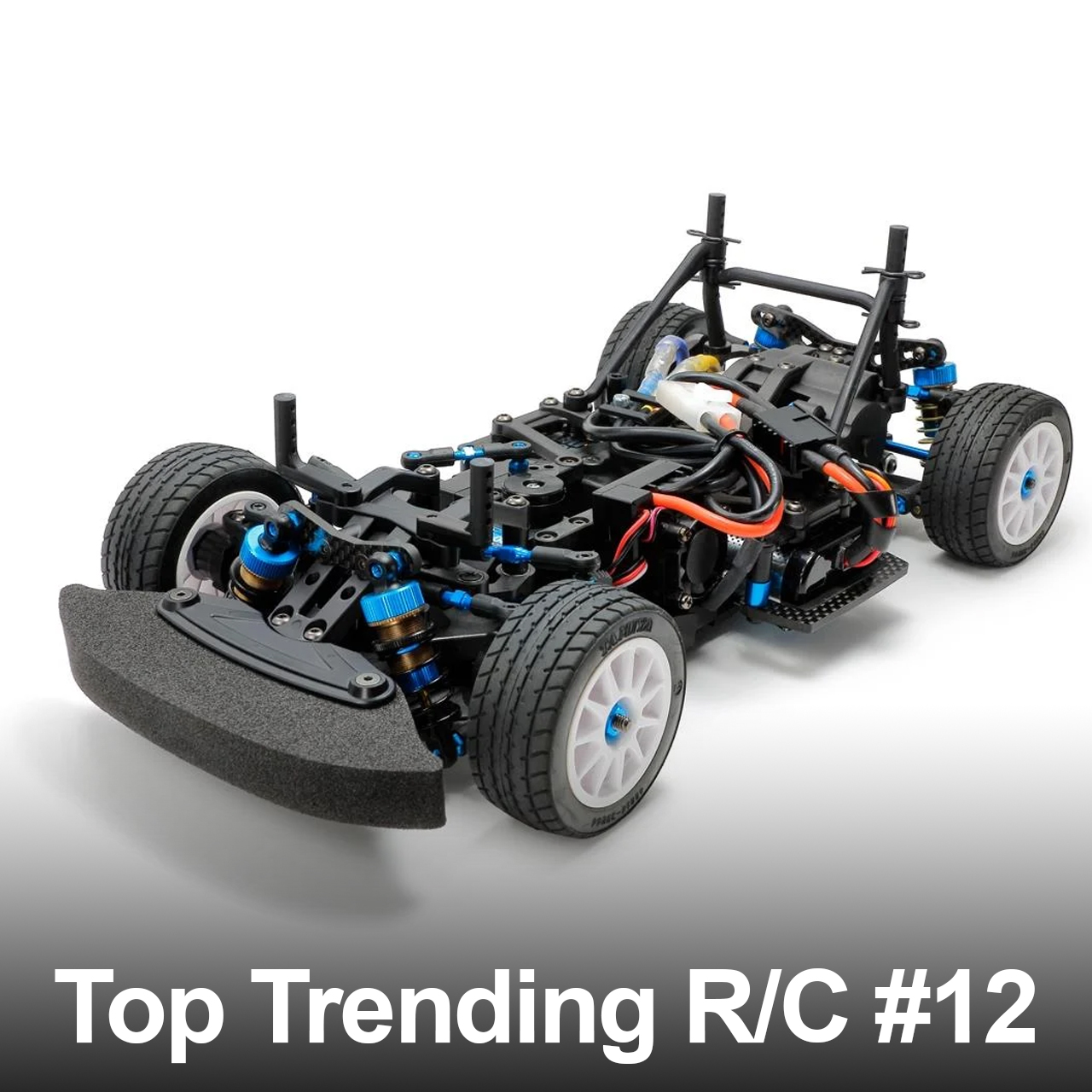 The Horizon Harbor 30” Tugboat is a great way to get outdoors, and it sits comfortably as the 11th most viewed item on our list. Perhaps this is because of its super-scale looks and an operable water cannon option. You’ll find this large replica tugboat is ideal for cruising the pond or can be used as a support boat for your speed boats. The Horizon Harbor is ready to run for about $450*. 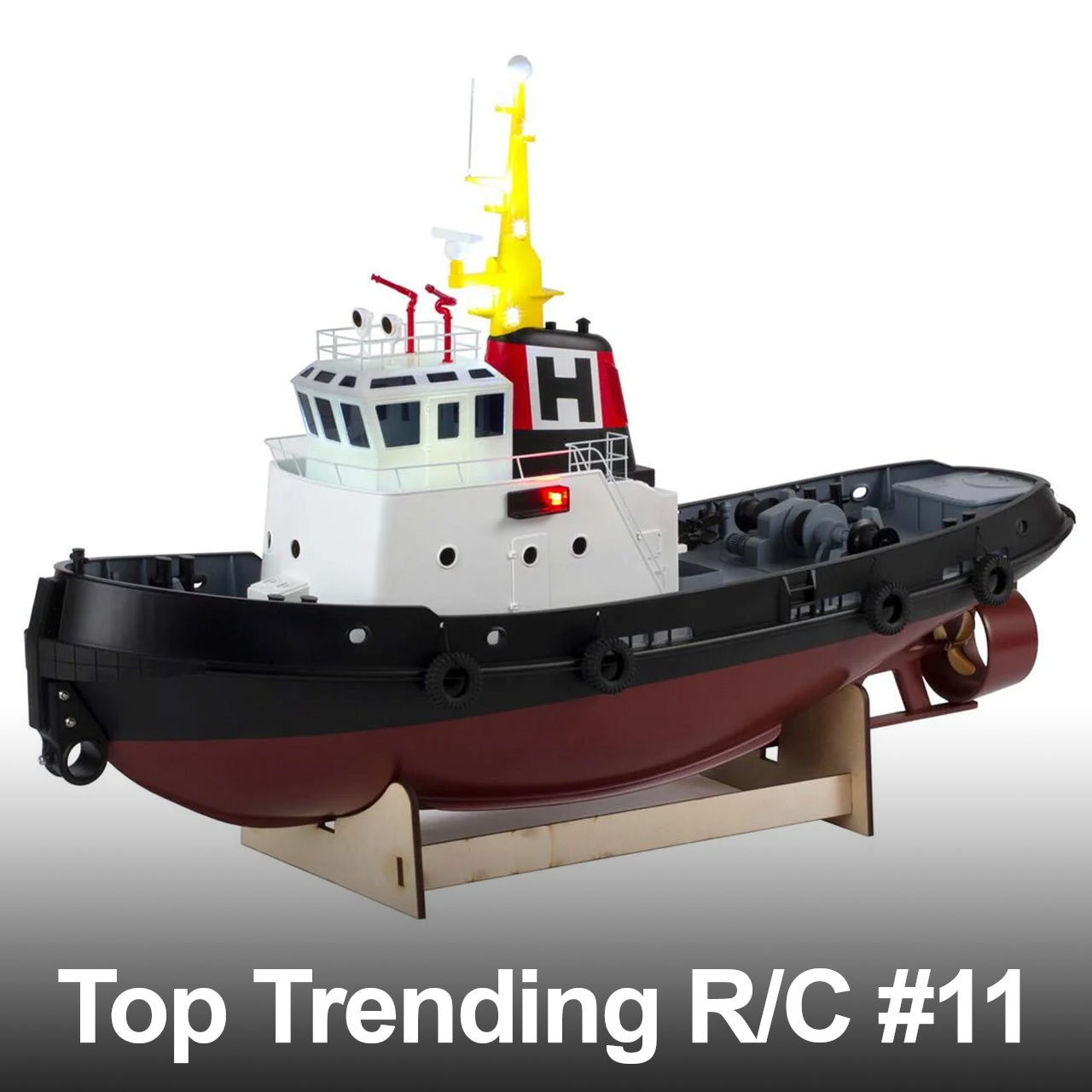 The popularity of the SCX24 mini rock crawlers has reached epic proportions. The latest offering, the 2021 Ford Bronco, continues this upward trend as one of the most practical indoor and outdoor mini RTR offerings available. They’re not particularly fast trucks, but they’re not meant to be. However, they are capable on rough terrain, are very upgradable, and look fantastic. This Bronco version uses a detailed hard plastic body instead of lexan, and the slight price increase reflects that. The Bronco model is available in red, blue, and grey, comes ready to run, and costs about $160*. 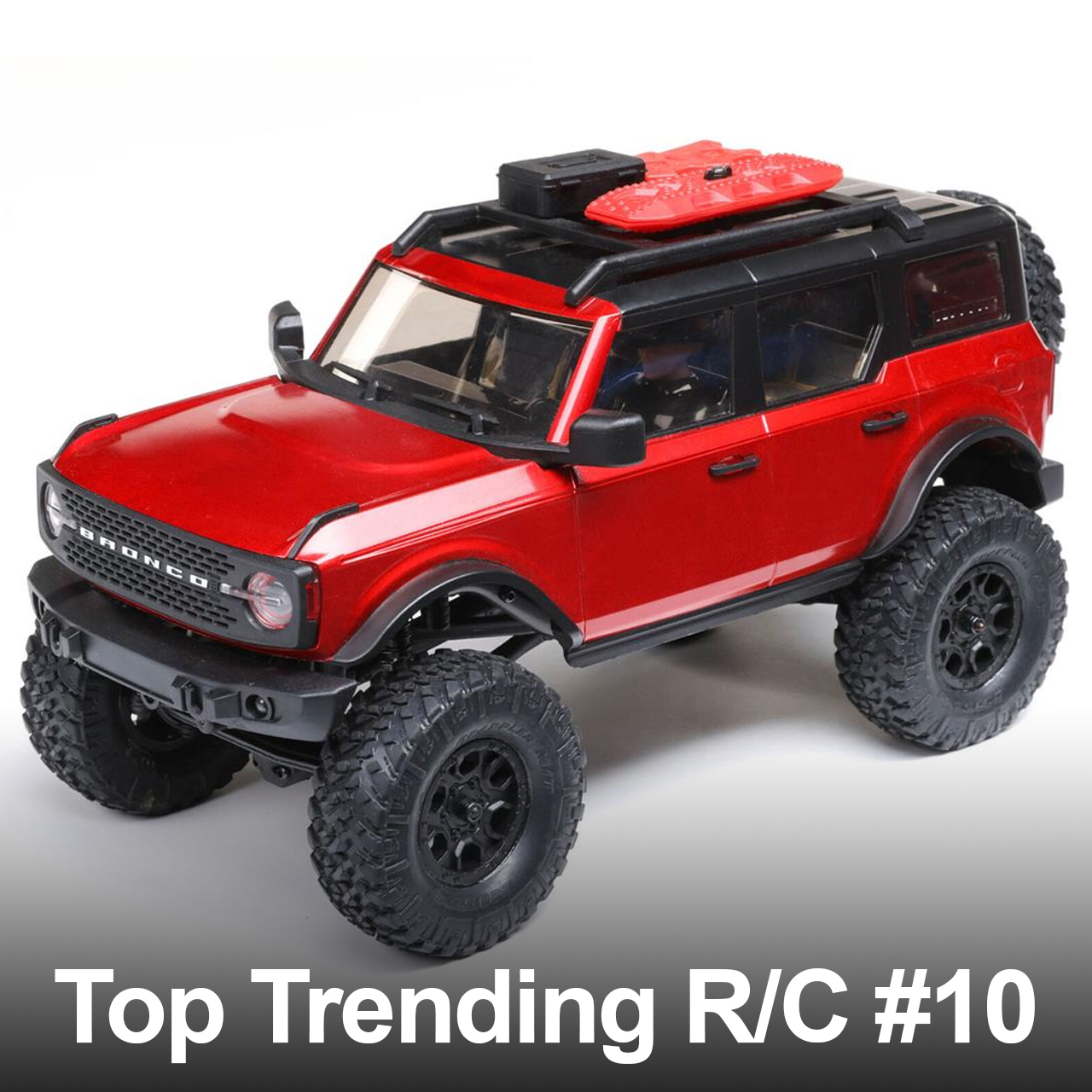 At number nine, the RMX 2.0 drift car is no stranger, and it’s known for being a great introduction to rear-wheel drive drifting. It’s ready to run and set up with a steering gyro right out of the box. Now, there are multiple versions of the RMX 2.0 chassis available. Each chassis is similar, but the main difference is which scale body style is included. Whatever body style you pick, you’ll find the MST RMX 2.0 drift car ready to run for about $390*. 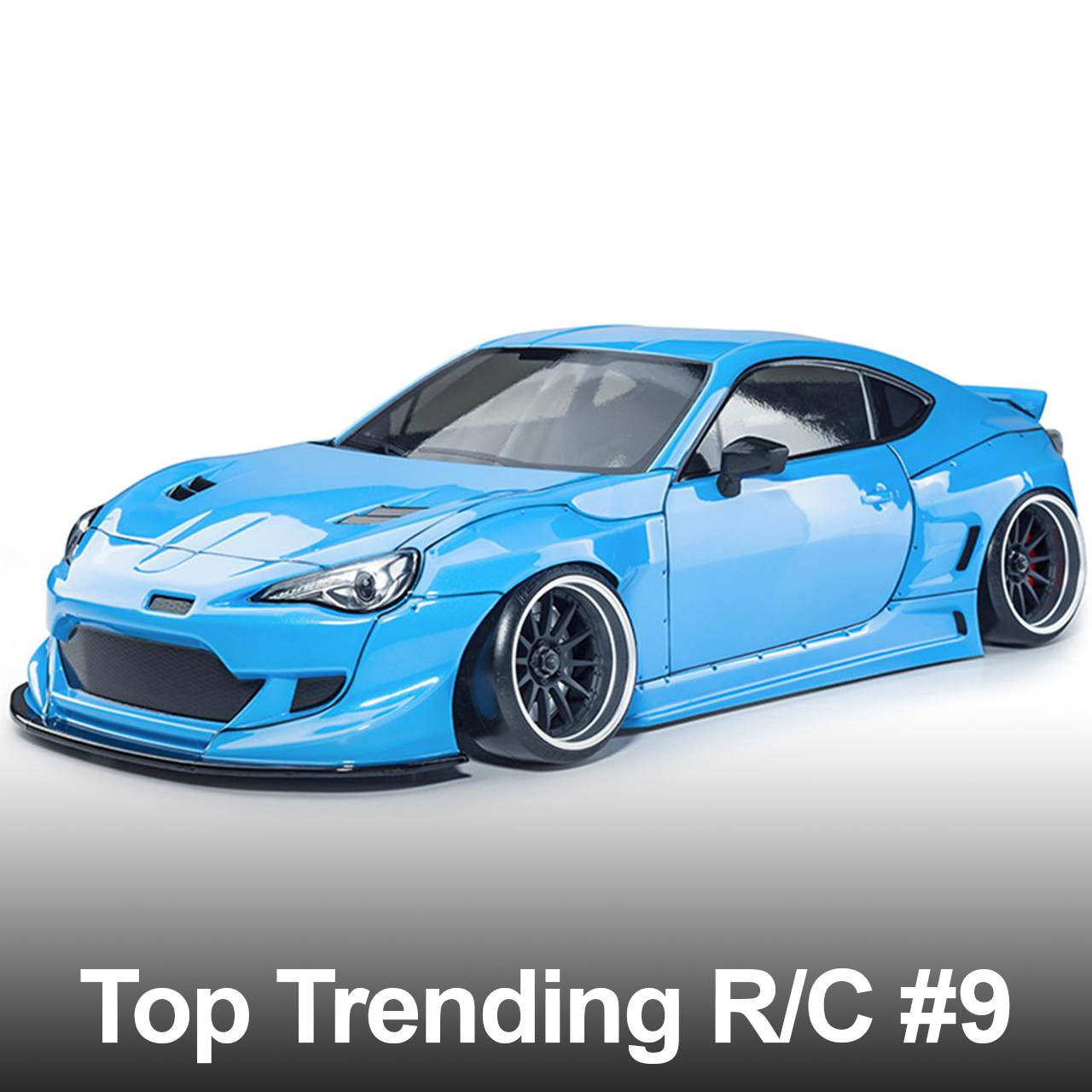 Number eight up next is another great looking car. It’s the recently released Tamiya Subaru WRX STI 24th Nurburgring. This is a tenth-scale touring car based on the TT-02 chassis platform and outfitted with a scale replica body. The car is a kit, and it requires assembly. The body also needs to be painted, and all the electronics must be added separately, except for the speed controller. You can find the WRX STI in. Kit form for about $120*. 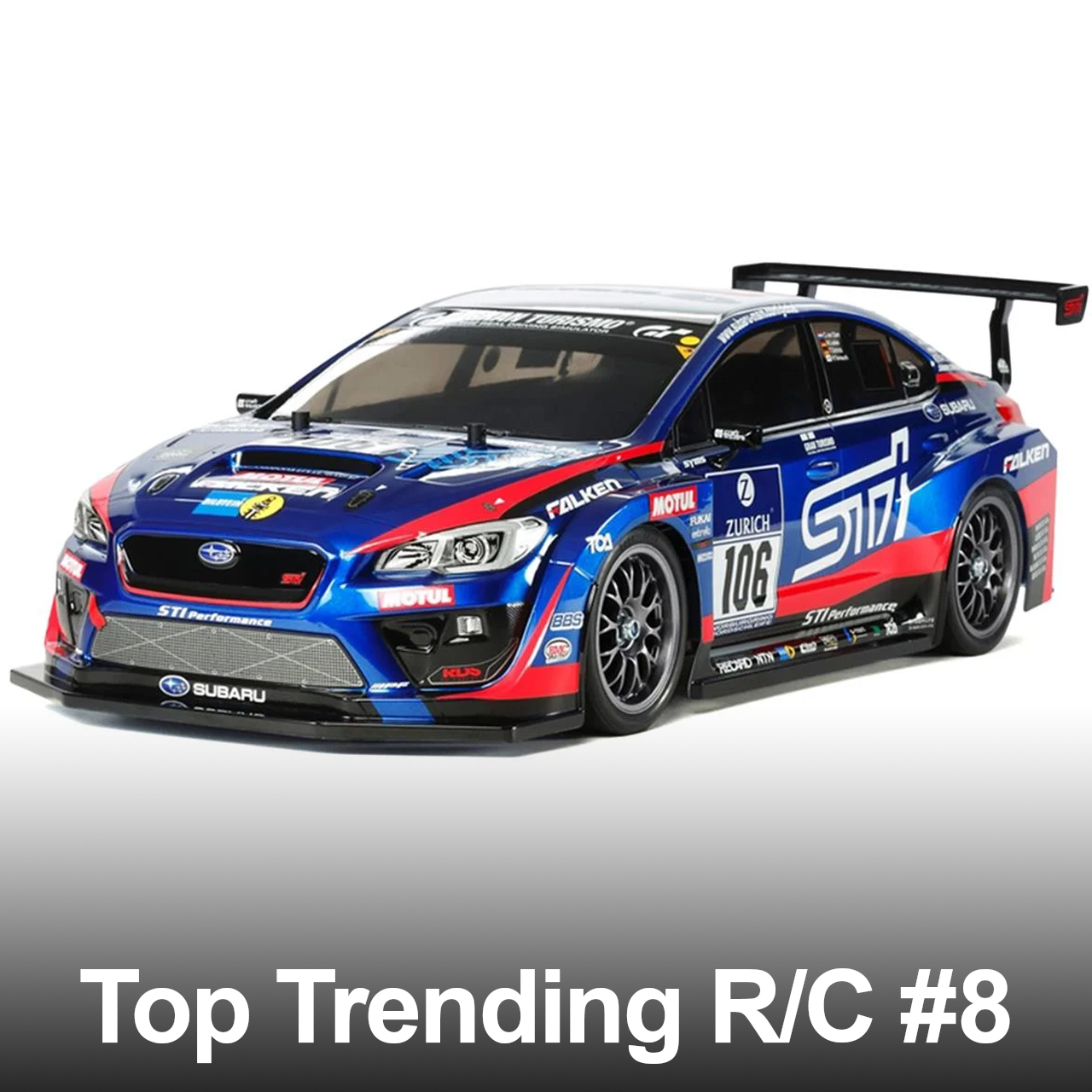 For the number 7th most viewed item, we return to eight scale sizing and big 6S brushless power. It’s the new Arrma FIRETEAM 6S bashers. Meant to be tough, fast, and powerful, and the FIRETEAM nails all those boxes with the addition of a unique and militarized look. Featuring a sturdy roll cage interior and soldiers, the FIRETEAM also features unique chassis dimensions, very well suited for aggressive, on-throttle driving without the worry of wheelies. When it’s time to boogie, the FIRETEAM has your back. The full-throttle FIRETEAM is available in white or black camo, comes ready to run, and costs about $750*. 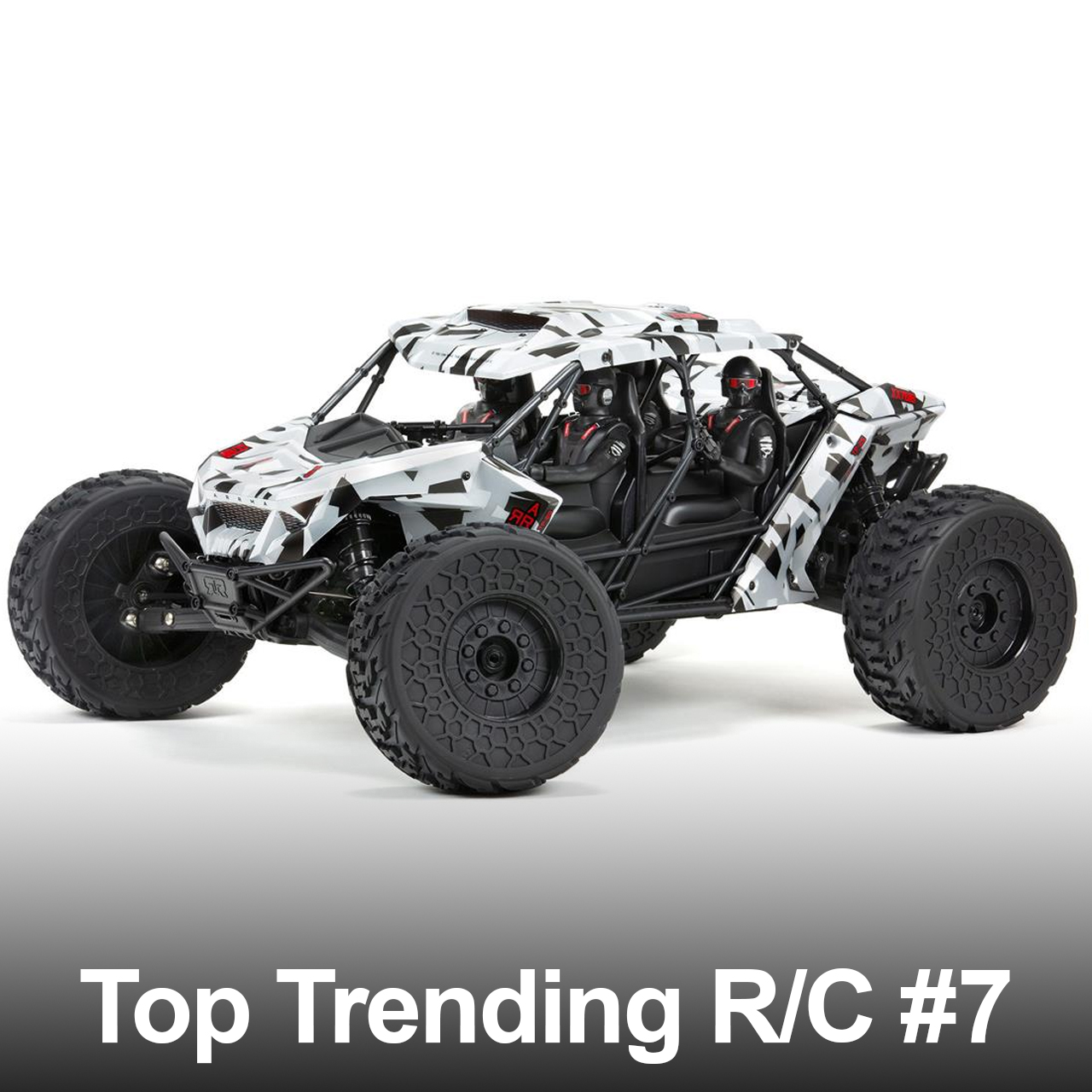 The sixth most viewed item is definitely a looker—it’s the 1969 Chevy Camaro from Losi. This realistic car comes with an officially licensed body, featuring details such as a molded grille with light buckets, fog lights, rear lights, and side view mirrors, all atop a tenth-scale sized touring car chassis. The drivetrain is 4WD and ready to rip with brushed electronics. The 1969 Chevy Camaro comes ready to run in black or red body colors and costs about $260*. 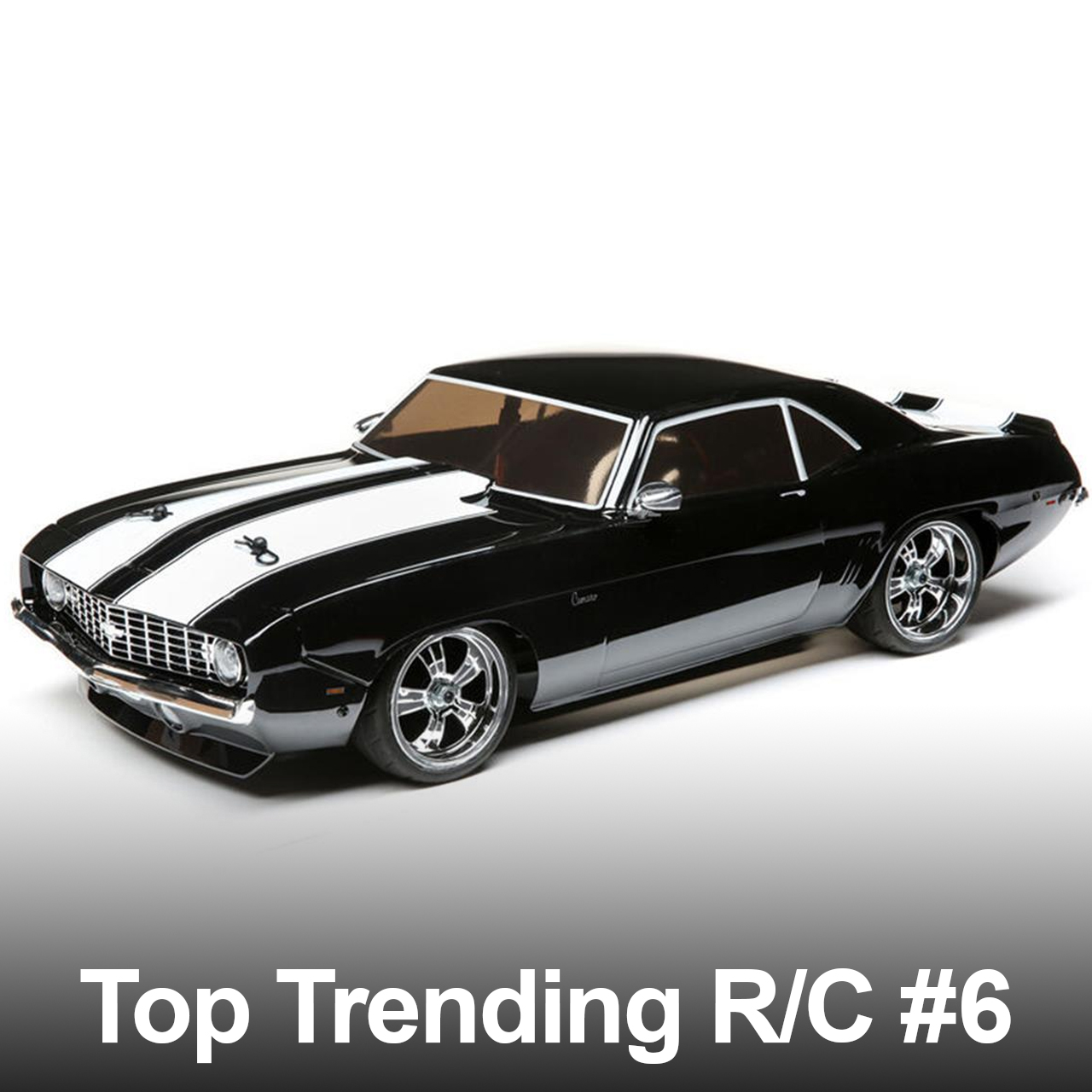 This is the 1997 Mercedes-Benz CLK-GTR from Tamiya, a replica of the real CLK-GTR that went on to success during the 1997 racing season. Originally, Tamiya released this body on the TA03R chassis, but now this classic body is released on the beginner-friendly TT-01 chassis that features a shaft-driven four-wheel drive drivetrain and lots of hop-up and accessory options. This 1/10¬ scale on-road car is available as a kit to build and paint with a basic 60 amp speed controller and costs about $140*. 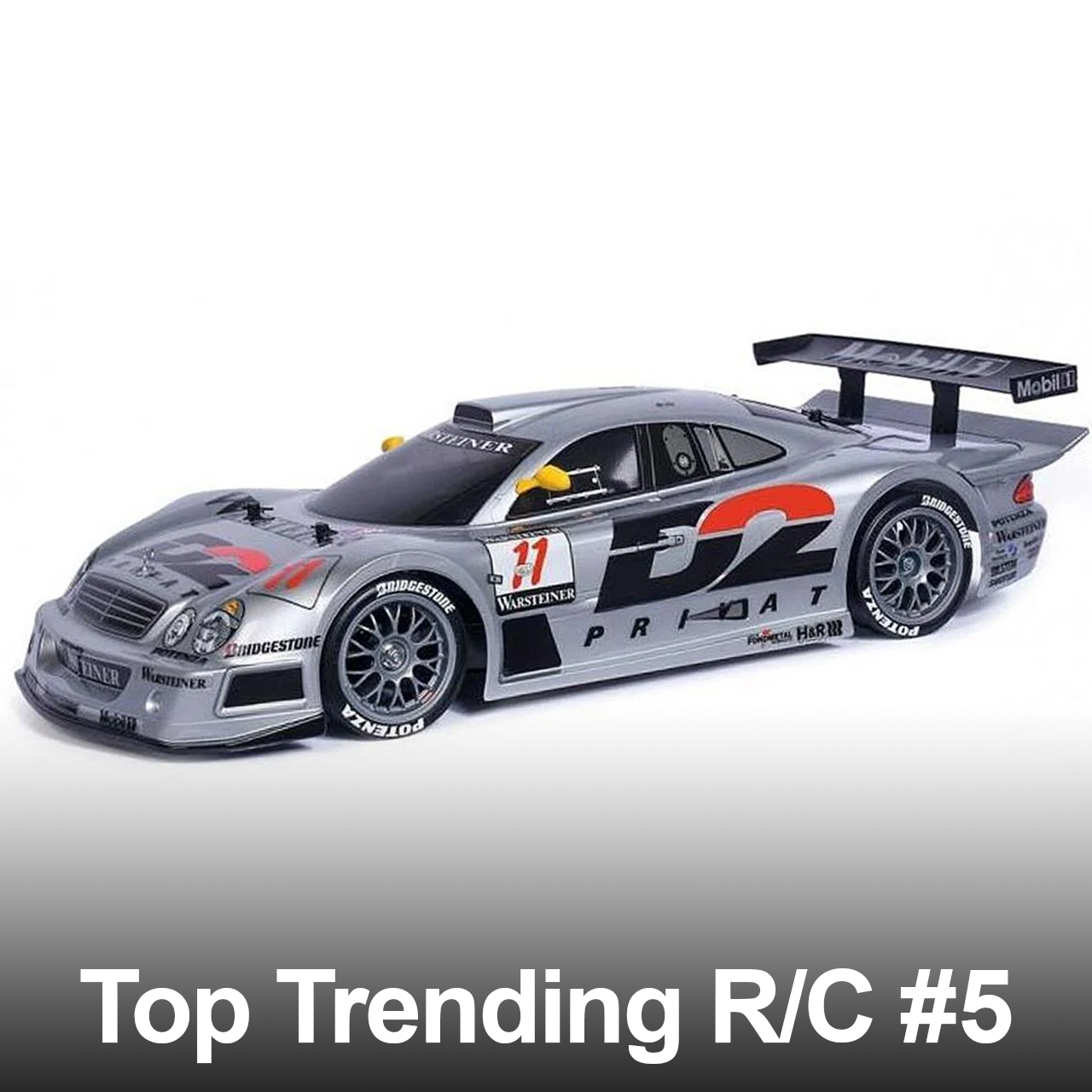 Number four is an airplane—not just any airplane. This is the officially licensed scale replica of the ultimate bush plane Mike Patey’s DRACO . This replica is made by E-flite and features a two-meter wingspan accompanied by a plethora of officially licensed items and scale details to ensure the RC version is as accurate as possible. E-flite offers the DRACO as a plug-and-play to add your transmitter and receiver. However, the most viewed award goes to the Bind and Fly or BNF, where you bind your Spektrum transmitter to the included receiver. Both versions are mostly assembled with about an hour of assembly required, and you can find the DRACO BNF starting at about $630*. 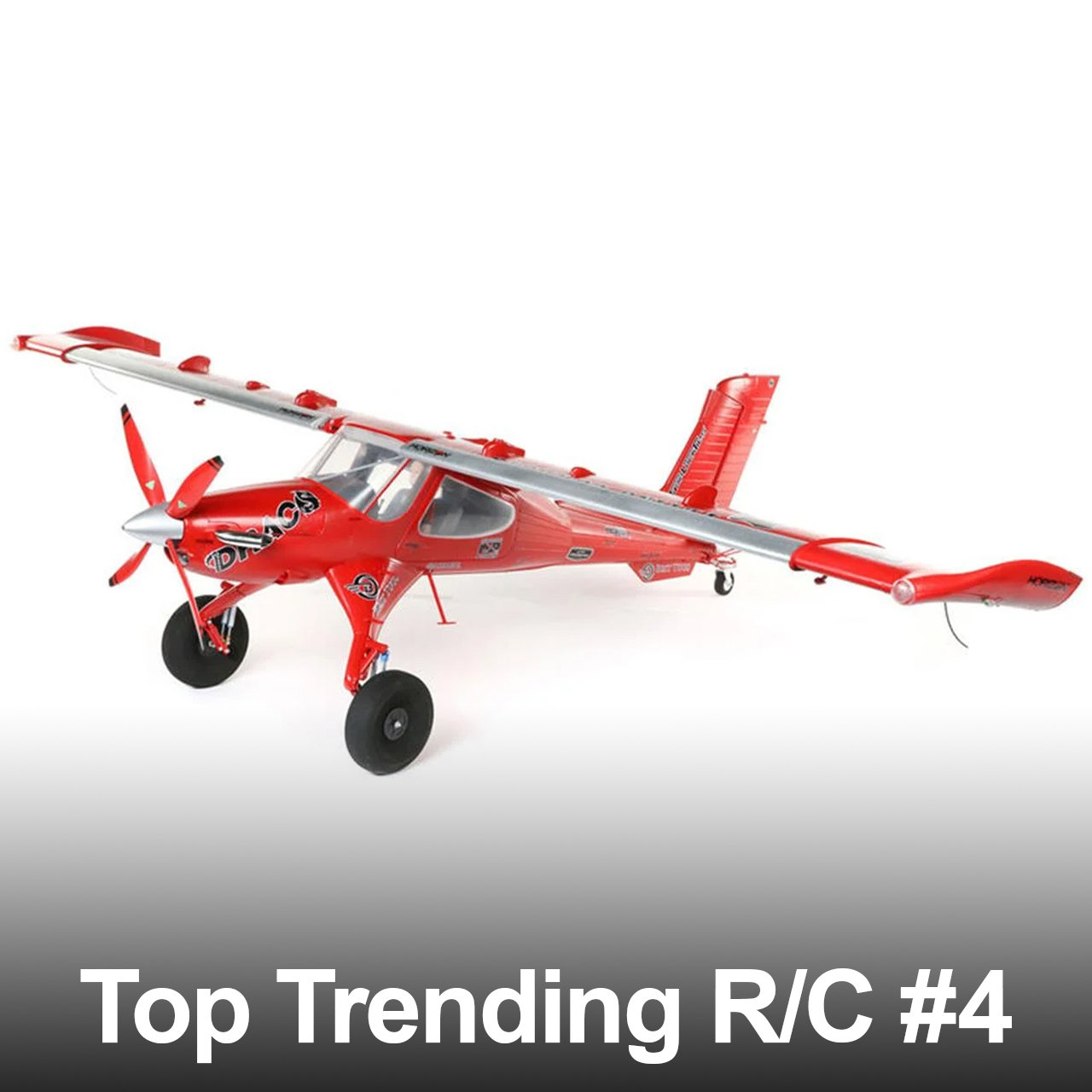 Number three dirt pavement, wet or dry, The 1/5 scale DB XL-E 2.0 is our number three most viewed car. Originally released a few years ago from Losi, this new version for 2022 adds in all the Spektrum Smart Technology and telemetry enabled receiver. With its large size 8S LiPo compatibility and Maxxis Creepy Crawler LT tires, it’s no wonder why so many people have been looking at it. The DB XL-E 2.0 comes in two styles, ready to run, with a large-scale price tag of about $1200*. 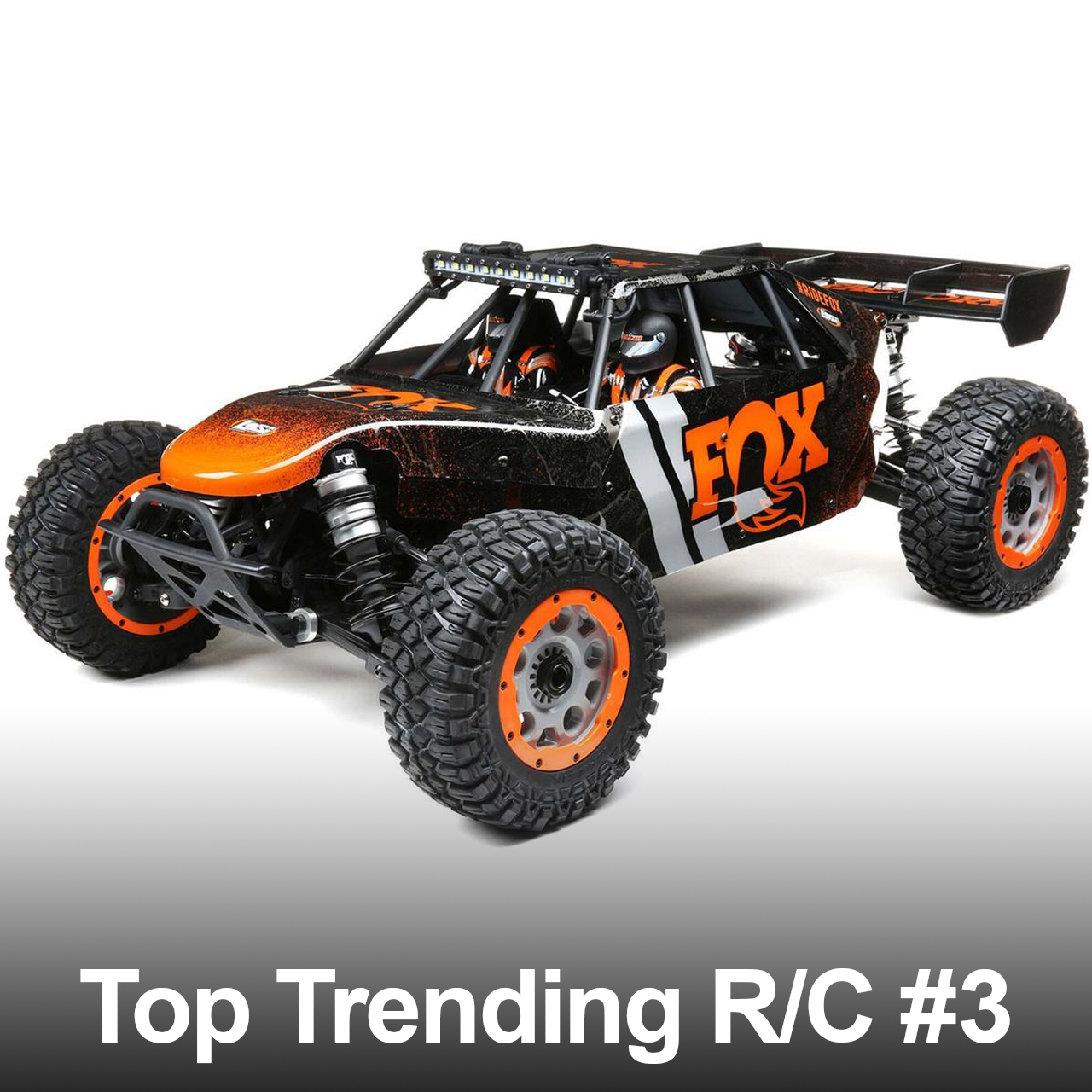 You don’t have to be into RC boats to enjoy the cool looks and style of our number two RC, the 30” Pro Boat UL-19 Hydroplane. The UL-19 may look like a fun toy, but this is for the serious RC enthusiast, boasting brushless 6S compatible electronics with a 50 mph speed rating. The overall boat weight is 5lbs without batteries, and the hull is made from fiberglass, with a matching canopy and removable vertical fins. There’s also a stainless steel two-blade propeller, stainless steel turn fin, and aluminum breakaway rudder. The UL-19 Hydroplane comes ready to run out of the box and costs about $450*. 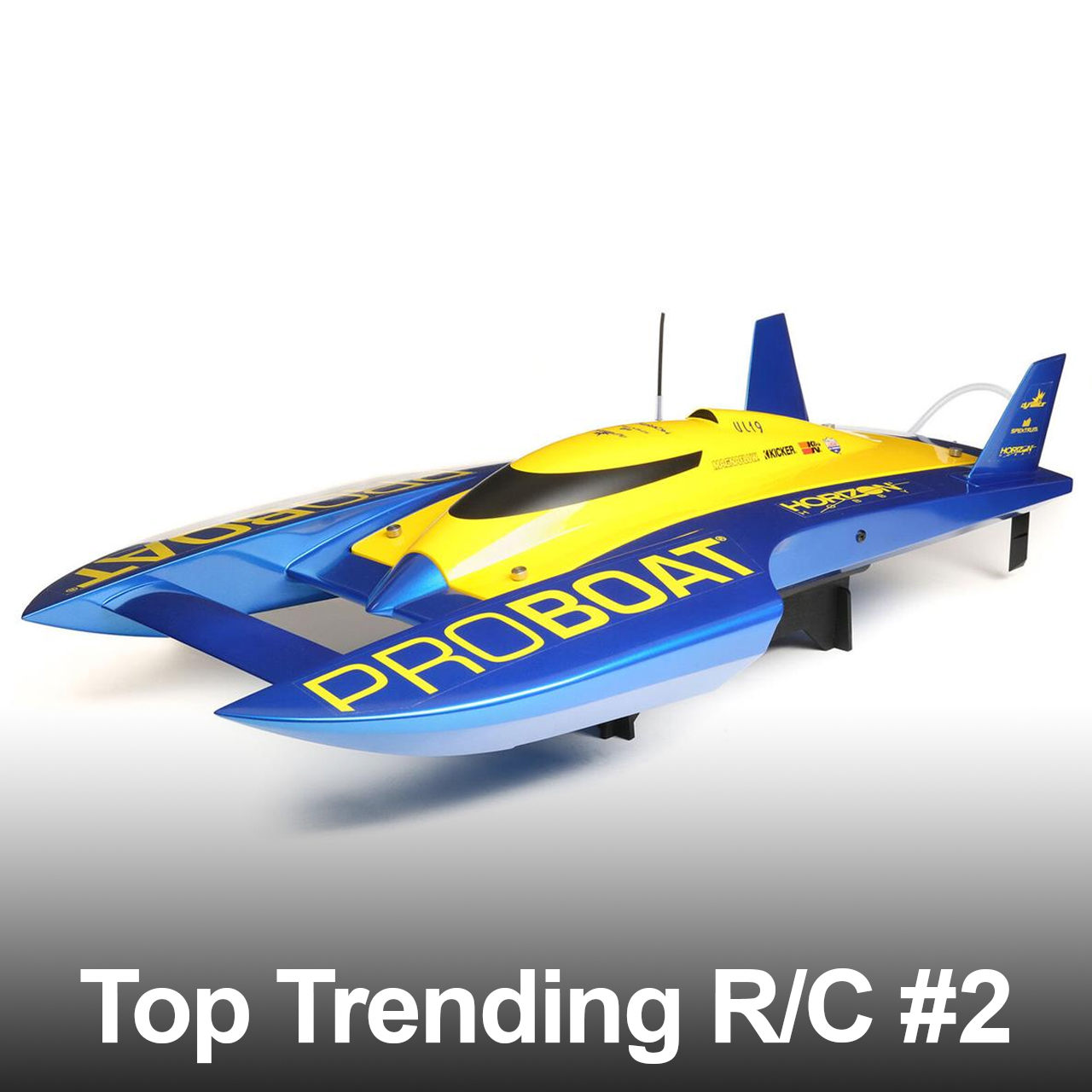 Out of over 73,000 RC items listed at AMain Hobbies—who guessed that the Losi Tenacity TT Pro 4WD short course truck would sit at the top? If you did, pat yourself on the back because the 1/10 Tenacity TT Pro is currently the most viewed item, and for good reason. This is an awesome four-wheel drive short course truck with independent suspension, three gear disks, oil shocks, and everything else you would expect from a hobby truck of this level. As the name suggests, this Pro model includes brushless electronics, a 550 motor, and a 50 mph speed rating. Plus, the TT Pro is available in two different color schemes. Both come ready to run and can. Be purchased for about $500*. 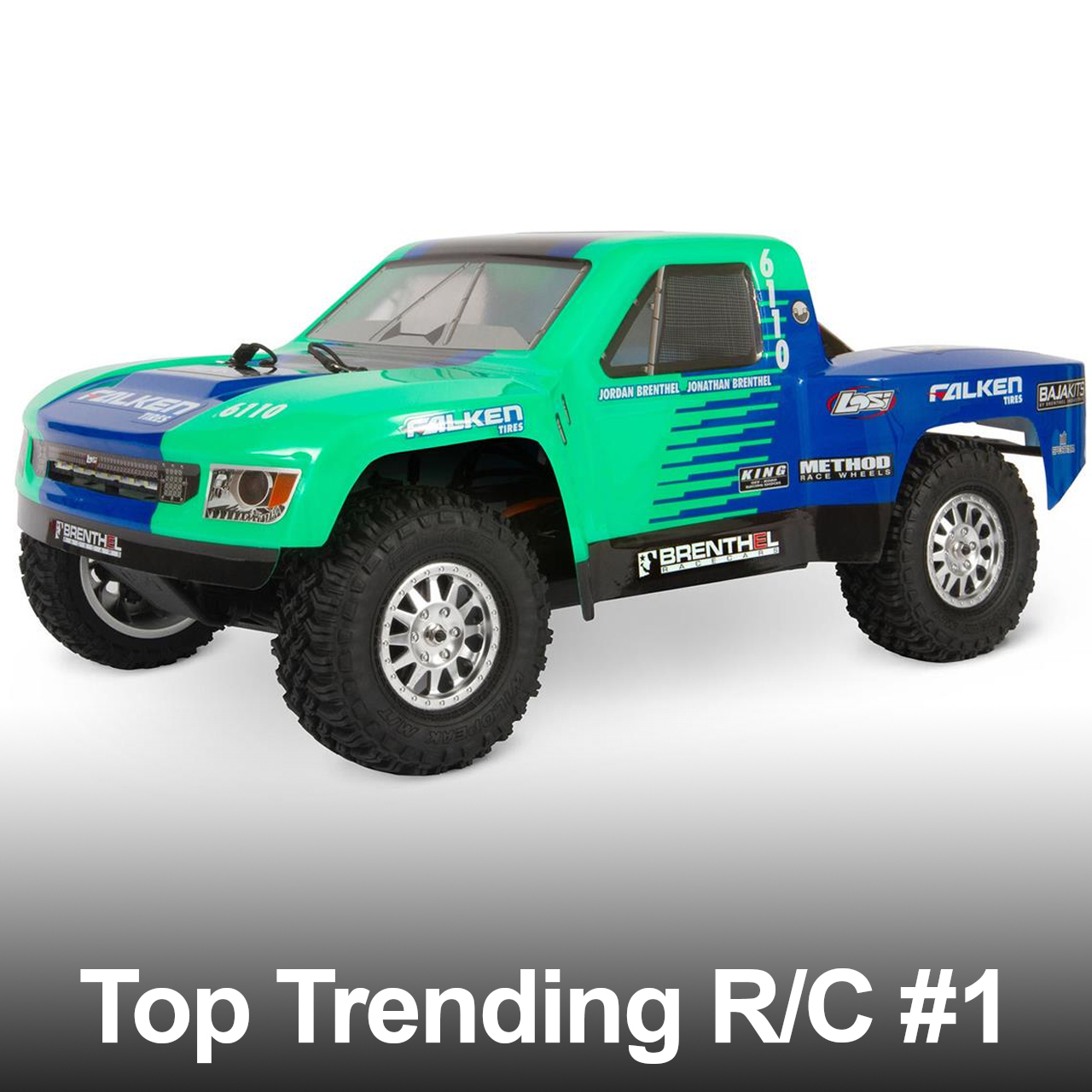