Tamiya has offered radio control (RC) cars for over 45 years. With some of the best entry-level kits on the market, they’ve spent a lot of time introducing people to the RC hobby.

Just imagine being a kid in the 80s and looking at a brand-new Tamiya RC kit. You wanted it so bad you even dreamed about it.  However, the problem with being a kid is you’re broke.

Eventually, these kids become adults with jobs and money to spend, and sometimes they want to fulfill those childhood passions—that is the context for this collection.

This is a special collector’s piece starring a bunch of new and vintage Tamiya RC cars, all collected by one of our AMain Hobbies customer service representatives. His name is James, and this is his collection of over twenty Tamiya radio control vehicles. 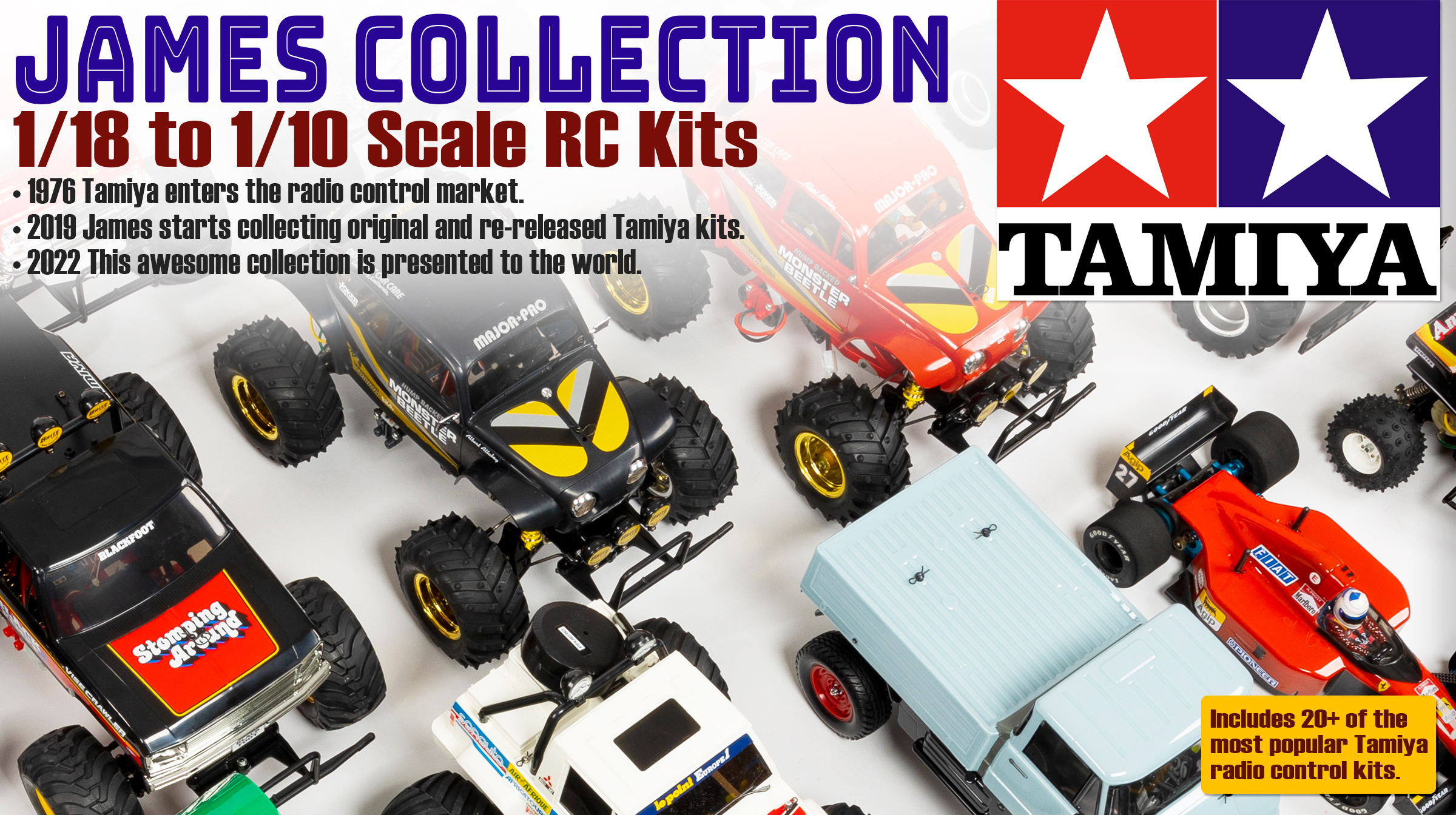 Up first is the Super Avante TD4, which is a pretty recent release. It is a 10th scale four-wheel drive kit that you need to assemble. It’s a mid-motor buggy designed off the TD4 chassis, shaft driven, and retains the slogan being nuts is neat. Now, this is an updated version of the older Avanti, and it’s just gorgeous! 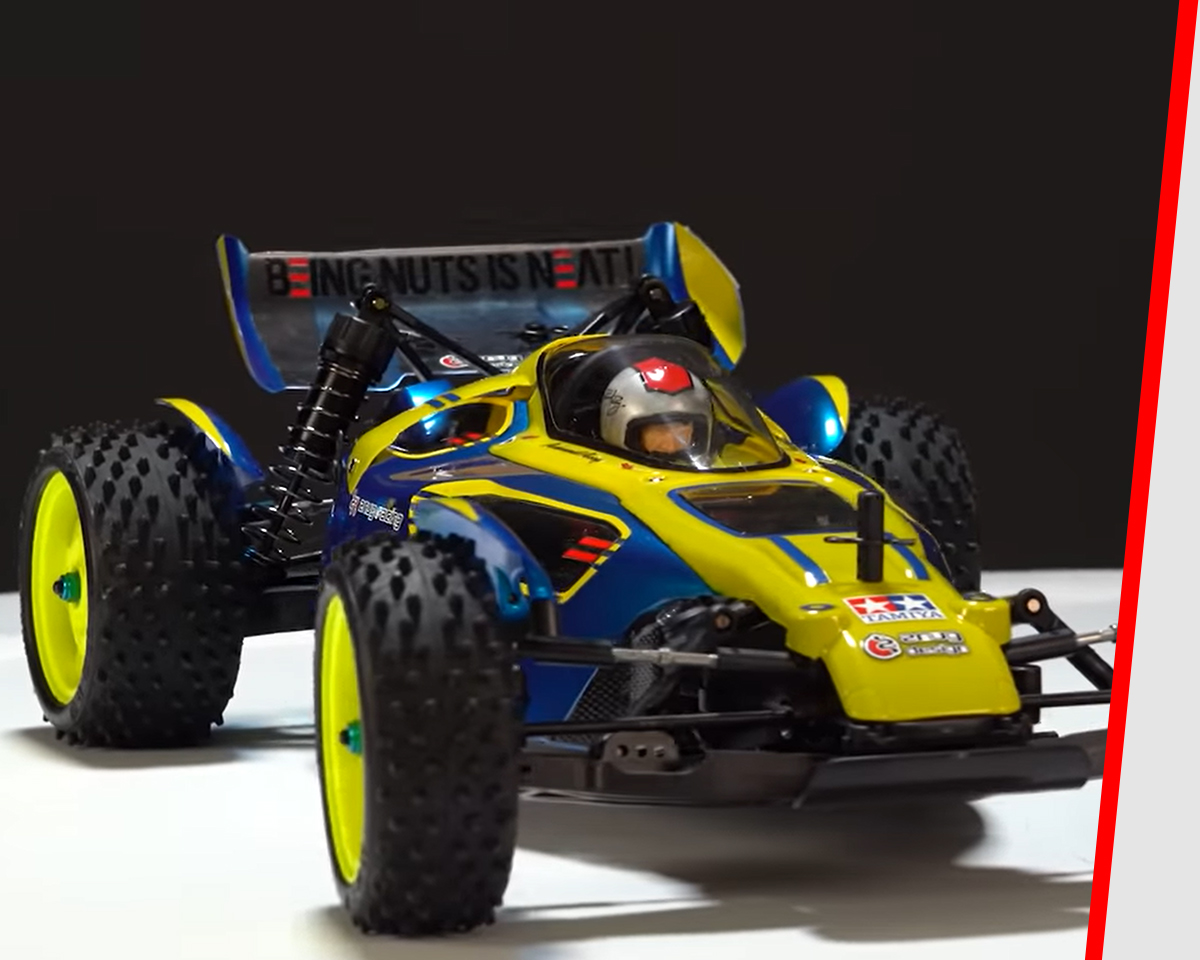 Next is the Fighting Buggy, a car initially released in 1982 called the Super Champ Buggy, but that was only the USA name. The original Japanese name was the Fighting Tiger. In 2014, the car was re-released, and Tamiya named it the Fighting Buggy. It is a 1/10 2WD kit, and it interestingly uses a single shock in the rear end. It has an independent suspension all the way around and features some incredible scale details—it looks phenomenal. 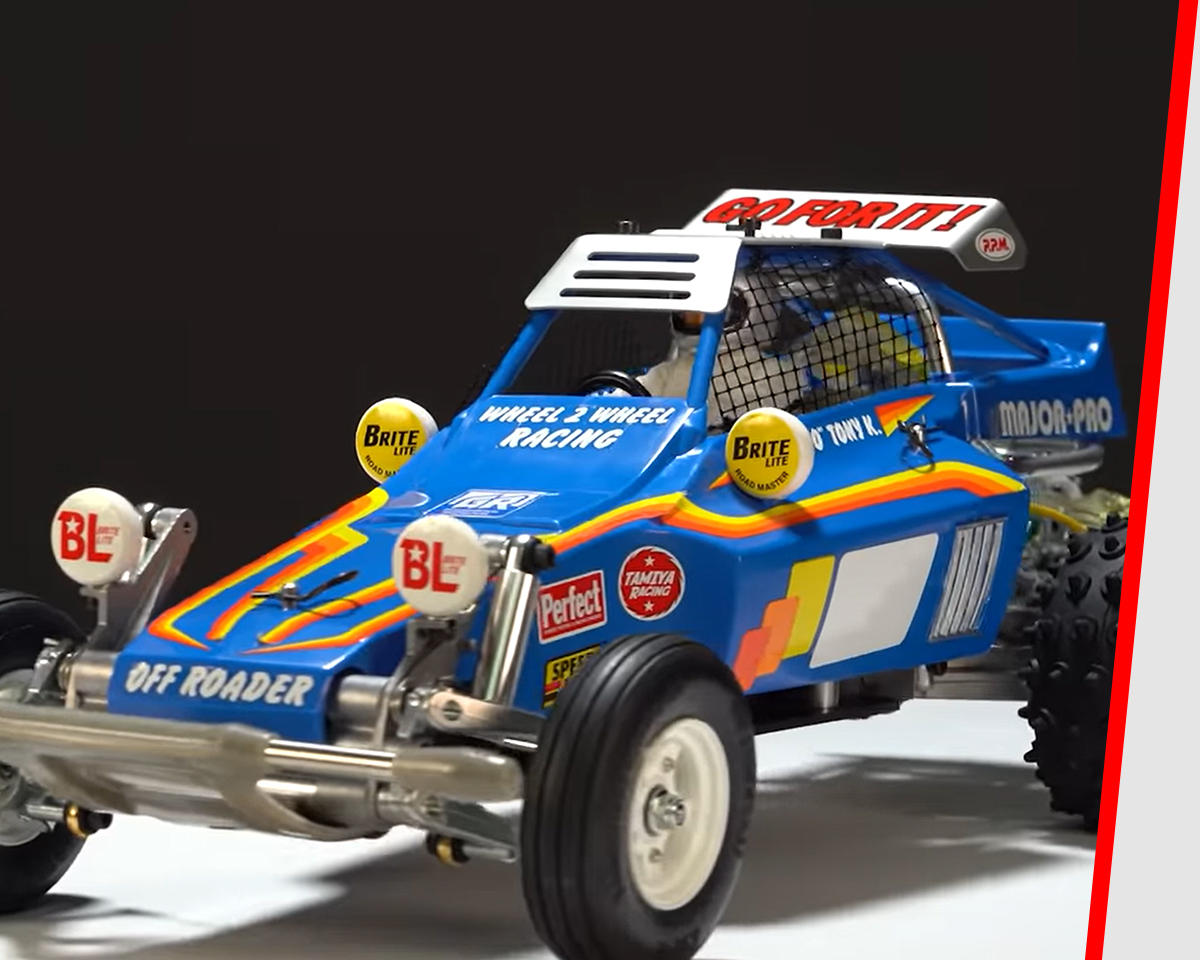 Here we have the Frog, probably one of the most famous buggies that Tamiya ever released. And it was popular as the first RC car for so many people. It was initially released in 1983, and then it was re-released in 2016. It is, of course, a 1/10th scale two-wheel drive buggy kit. It uses an ABS plastic construction and a rear trailing arm independent suspension with little rubber boots. 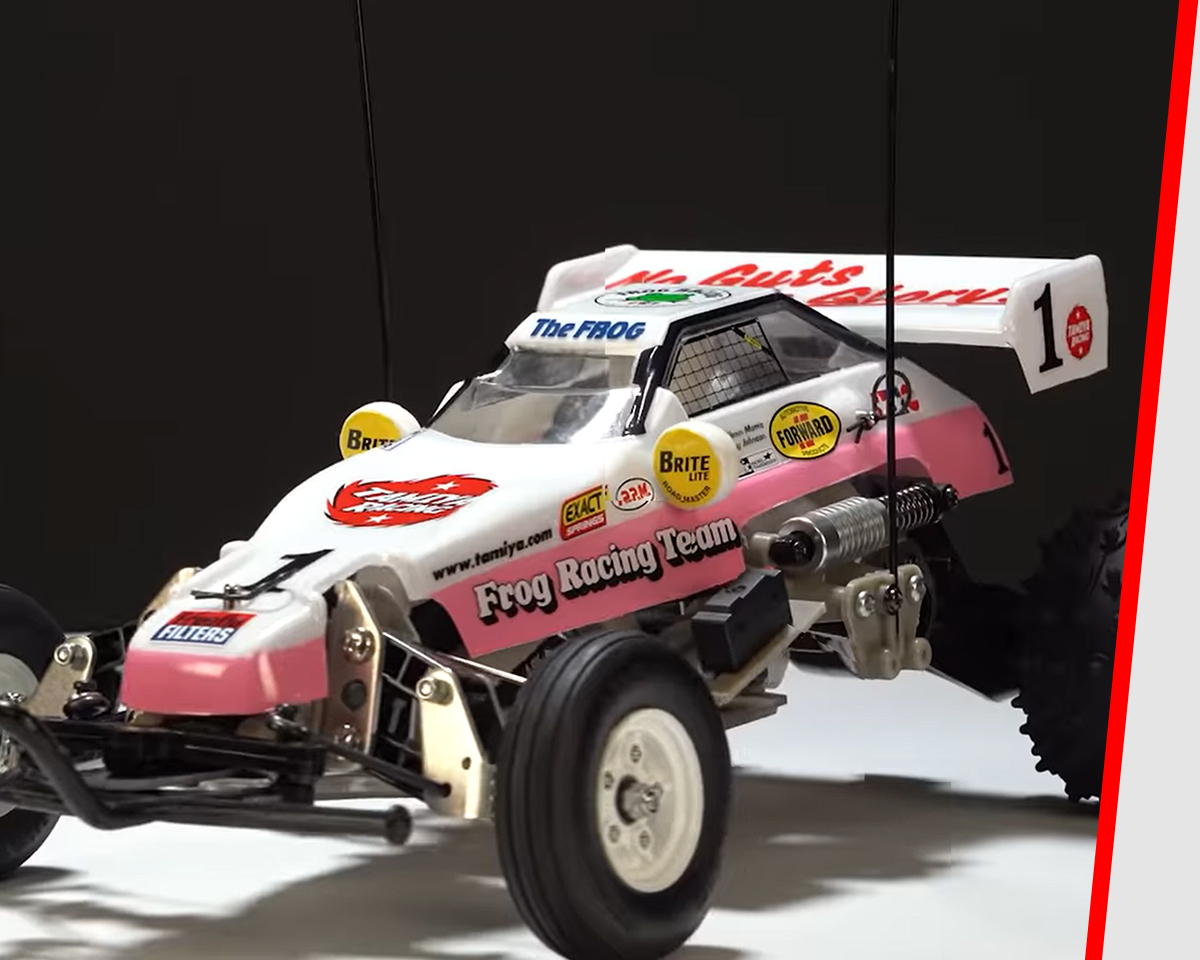 The Grasshopper is next, and it’s another first RC for many people. Initially released in 1984, it uses a hard plastic body. The 2016 re-release of the buggy here includes a solid rear axle, and the hard plastic body is pretty easy to paint. 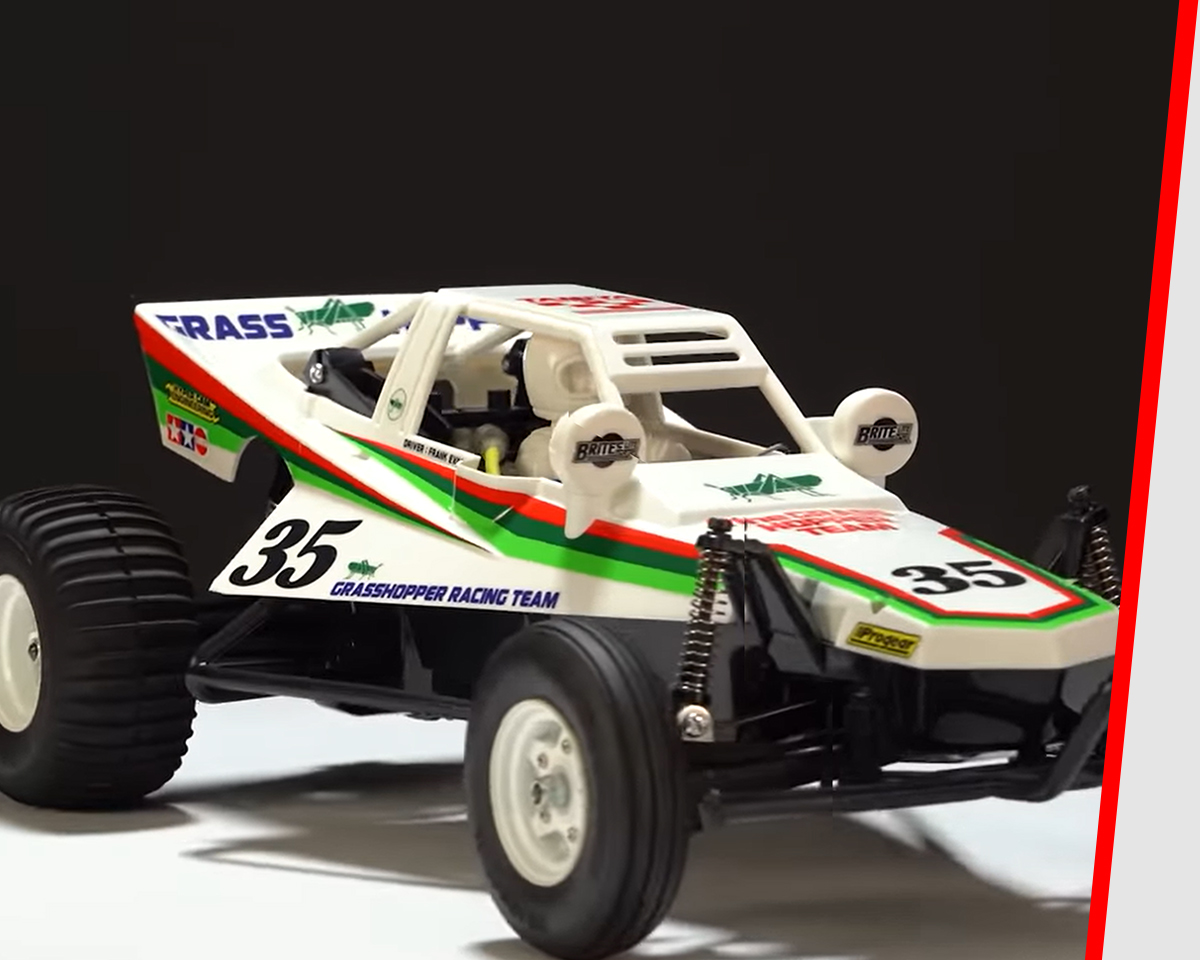 This buggy is an original Hornet, released in 1984. It is a two-wheel drive, 1/10 scale buggy. It has a solid rear axle, independent front suspension, lexan body, and it came with a mechanical speed control that James installed on the buggy. 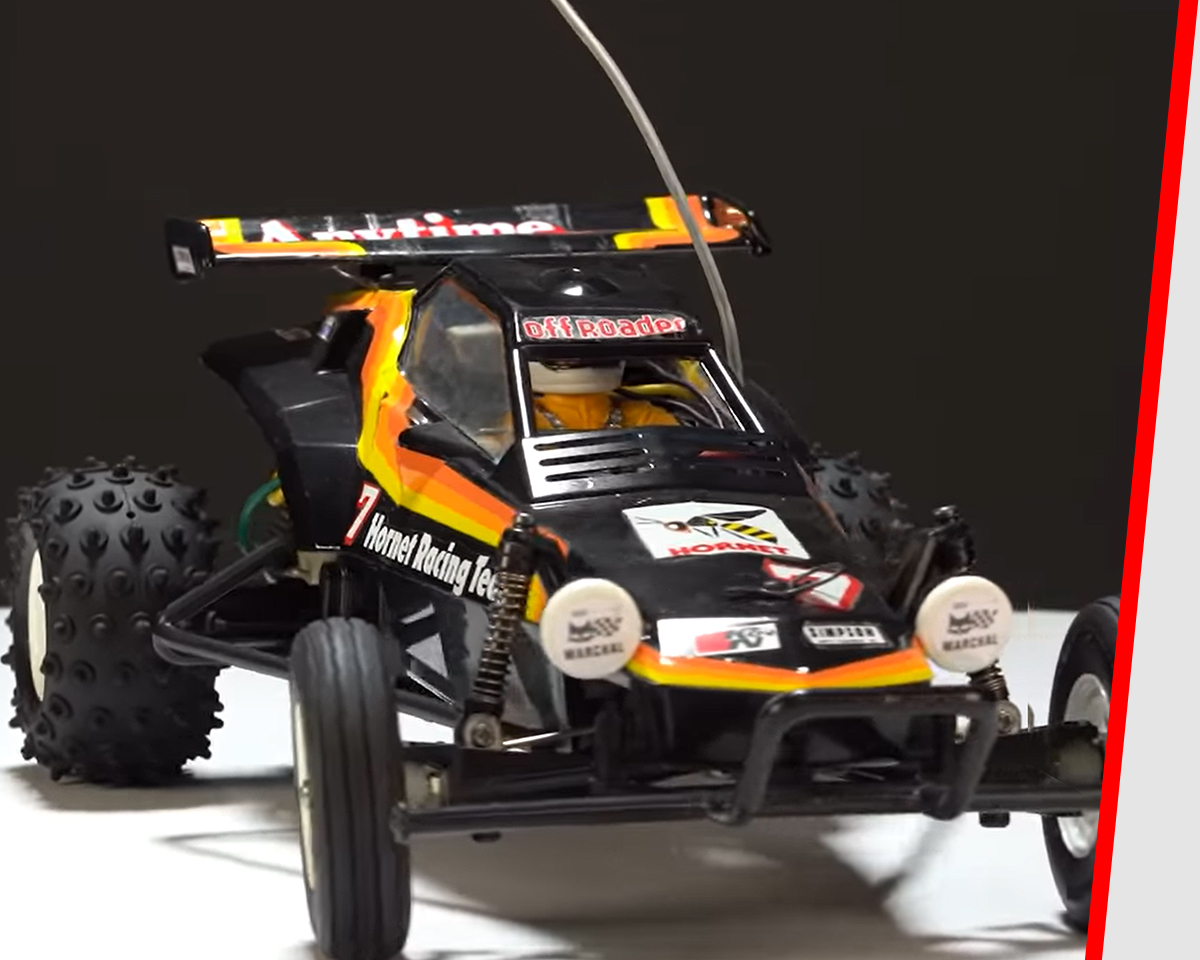 Up next is the Wild One Blockhead Edition. This particular kit was just released in 2021, but the original Wild One was released in 1985. The buggy is a 1/10 scale, 2WD kit and has a cool trailing arm rear independent suspension with little rubber boots over those drive shafts. There are so many scale details. In particular, the rear tire lugs alternate between spikes and lugs, which is not something you see very often, and it’s kinda cool. 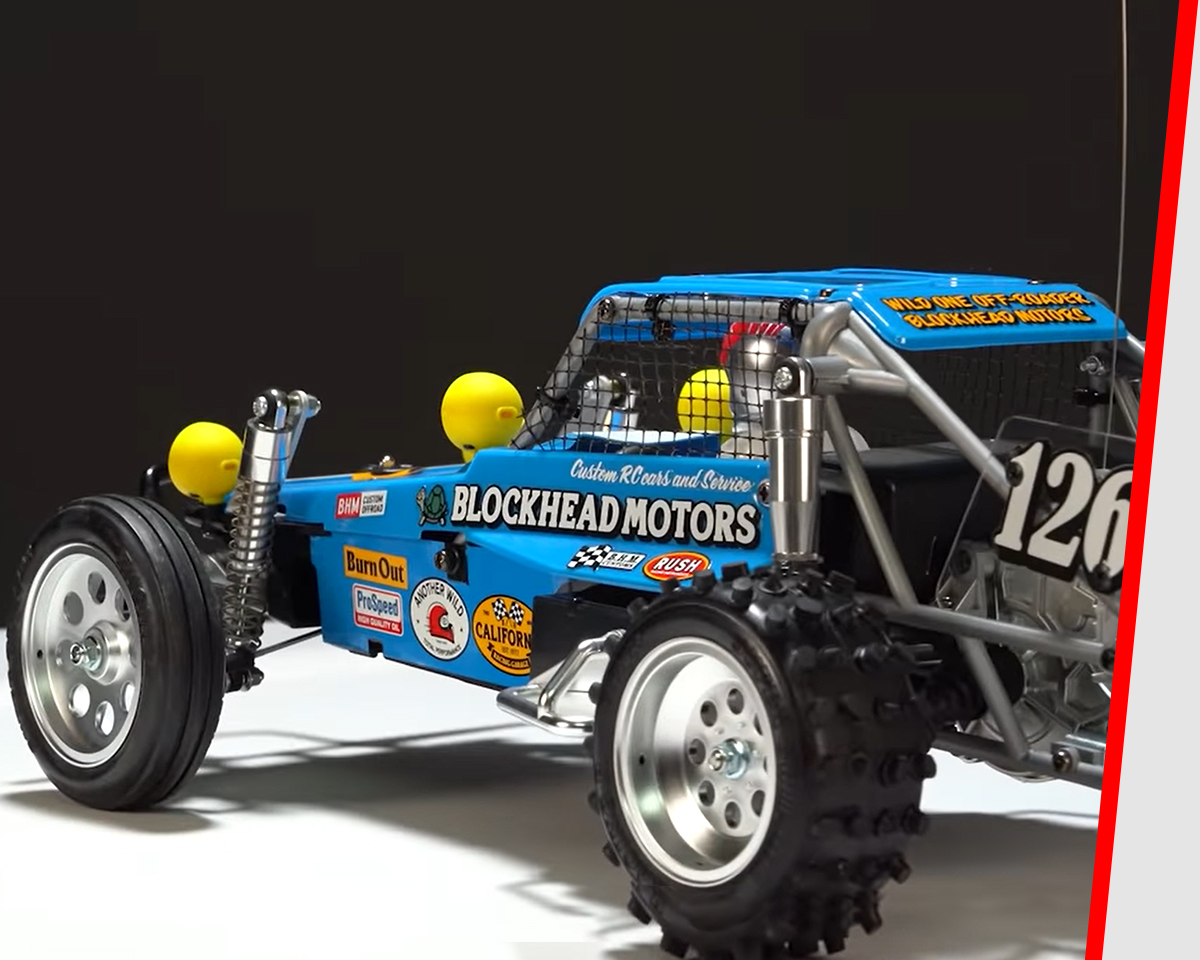 This is the Ford Escort MK.II Rally. It’s a 1/10 scale shaft driven, four-wheel drive rally car that uses the MF-01X chassis, which comes in a few different versions with distinctive style bodies, all with the same rally car chassis. Tamiya RC intends to make the Ford Escort look like the RAC rally champion from 1975 to 1979. This vehicle does come with a pre-painted body, and it appears realistic with scale tires, mirrors, and light buckets. 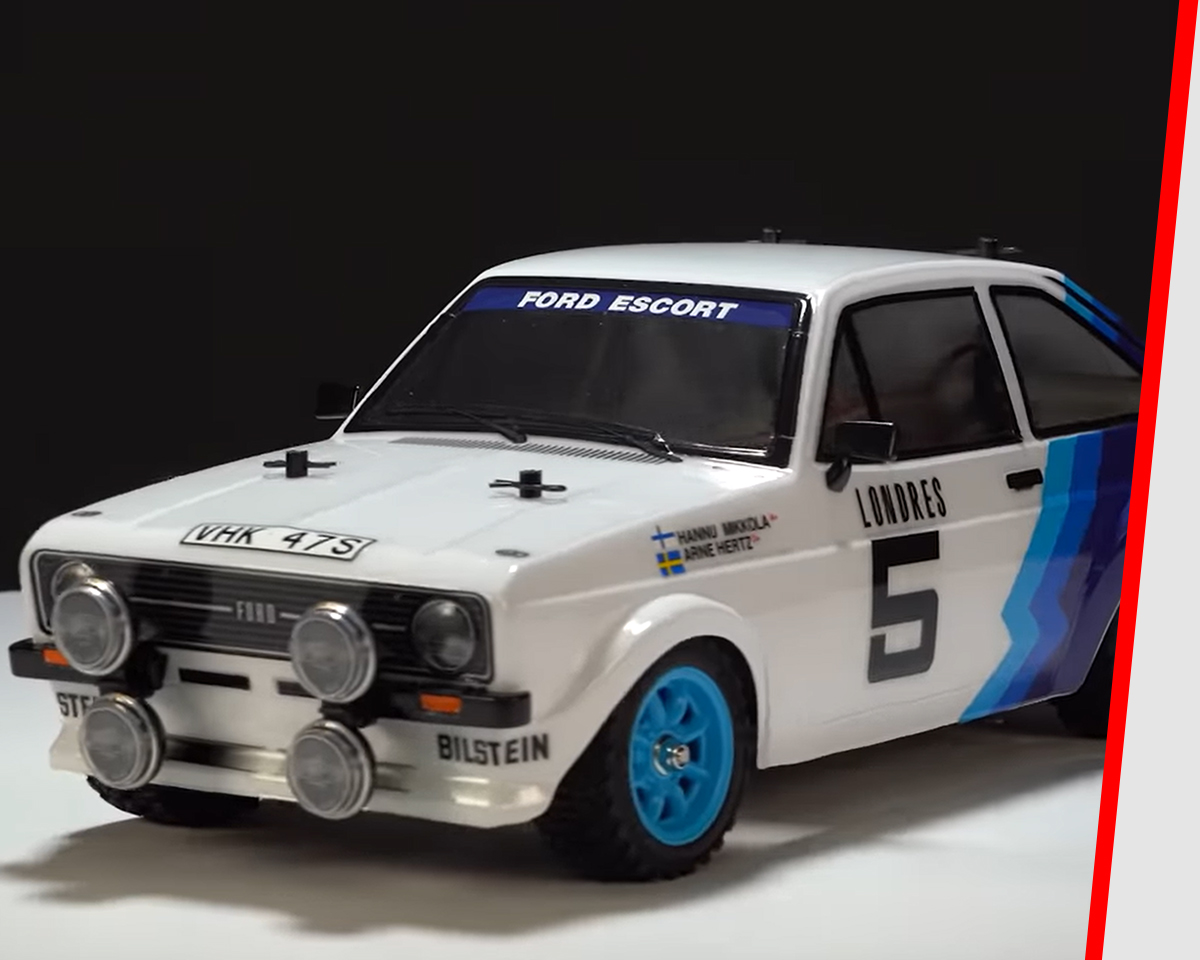 Now that leads us into the Beetle MF One X Rally, which uses that same MF-01X chassis, but this time with the Beetle body. This vehicle represents the Beetle’s presence in racing, which was pretty heavy in the 1950s through the 80s. The body features chrome bumpers, light buckets, mirrors, window trim, and other scale details. 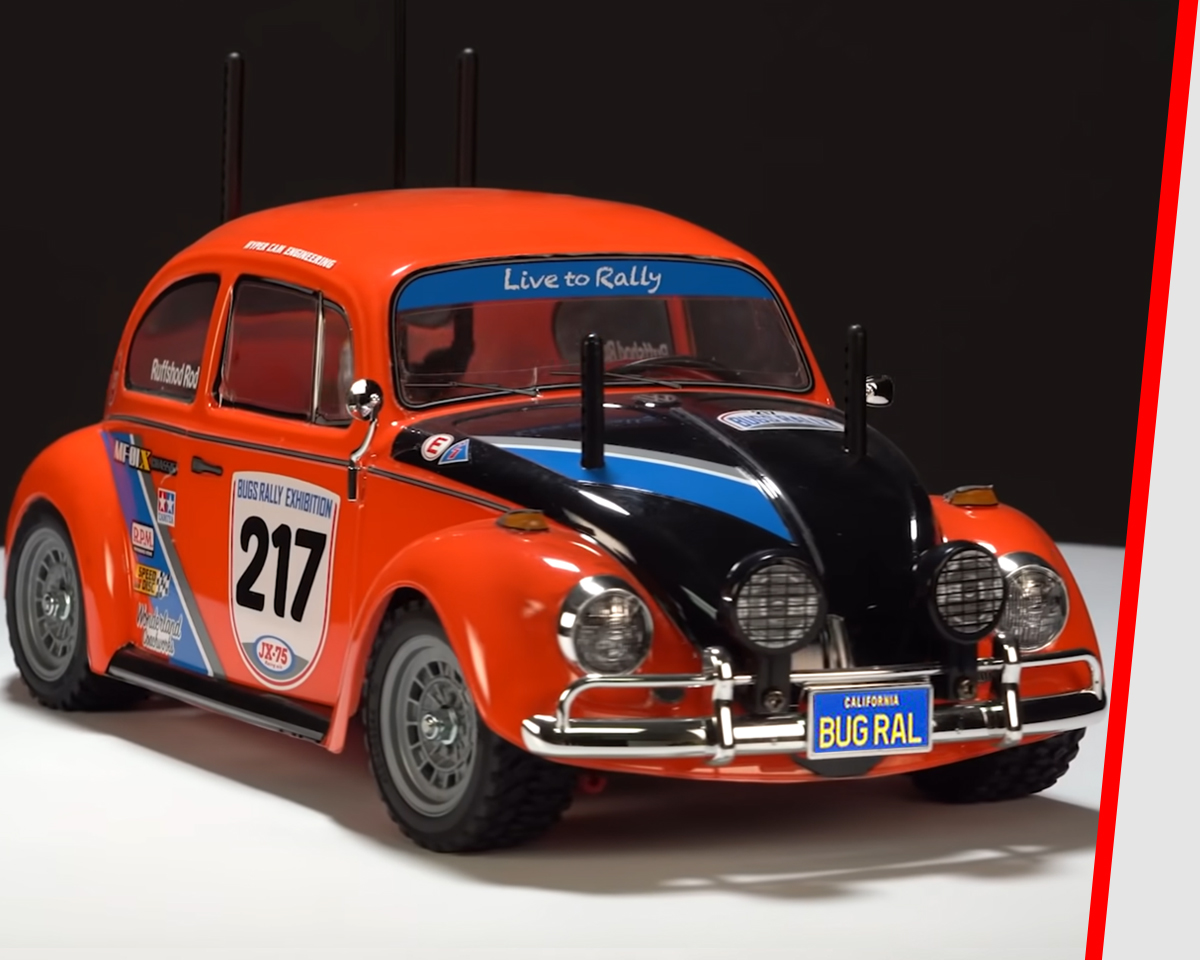 This is the Mitsubishi Montero Wheelie. It’s a 1/10 scale, 2WD drive wheelie truck with a hard plastic, comically styled body. It has an independent front suspension with a solid rear axle and a wheelie bar in the back. The truck features a scale decal sheet and a spare tire near the rack. 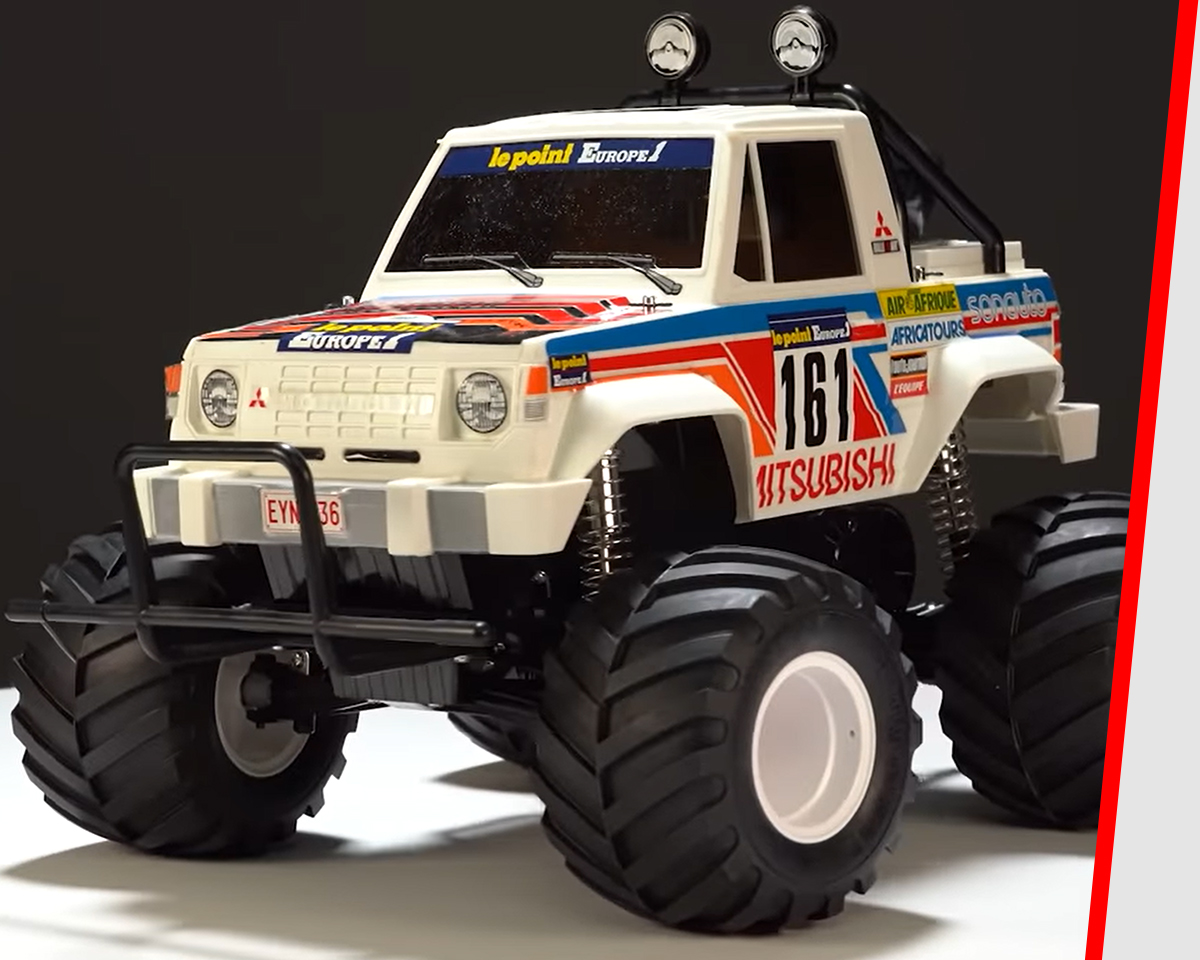 Our next RC is the Mercedes Benz Unimog 406. It’s a 1/10 scale, four-wheel drive limited edition of the Unimog 406 series U900. This truck was built on the CC-02 ladder frame chassis, and it features a link suspension and solid axles with working disks. It is set up very much like a modern 10th scale trail truck. The truck also uses a separate gearbox and transfer case. The body comes pre-painted with PS-32 Tamiya RC Corsair paint, and it features many scale details, including LED lights. 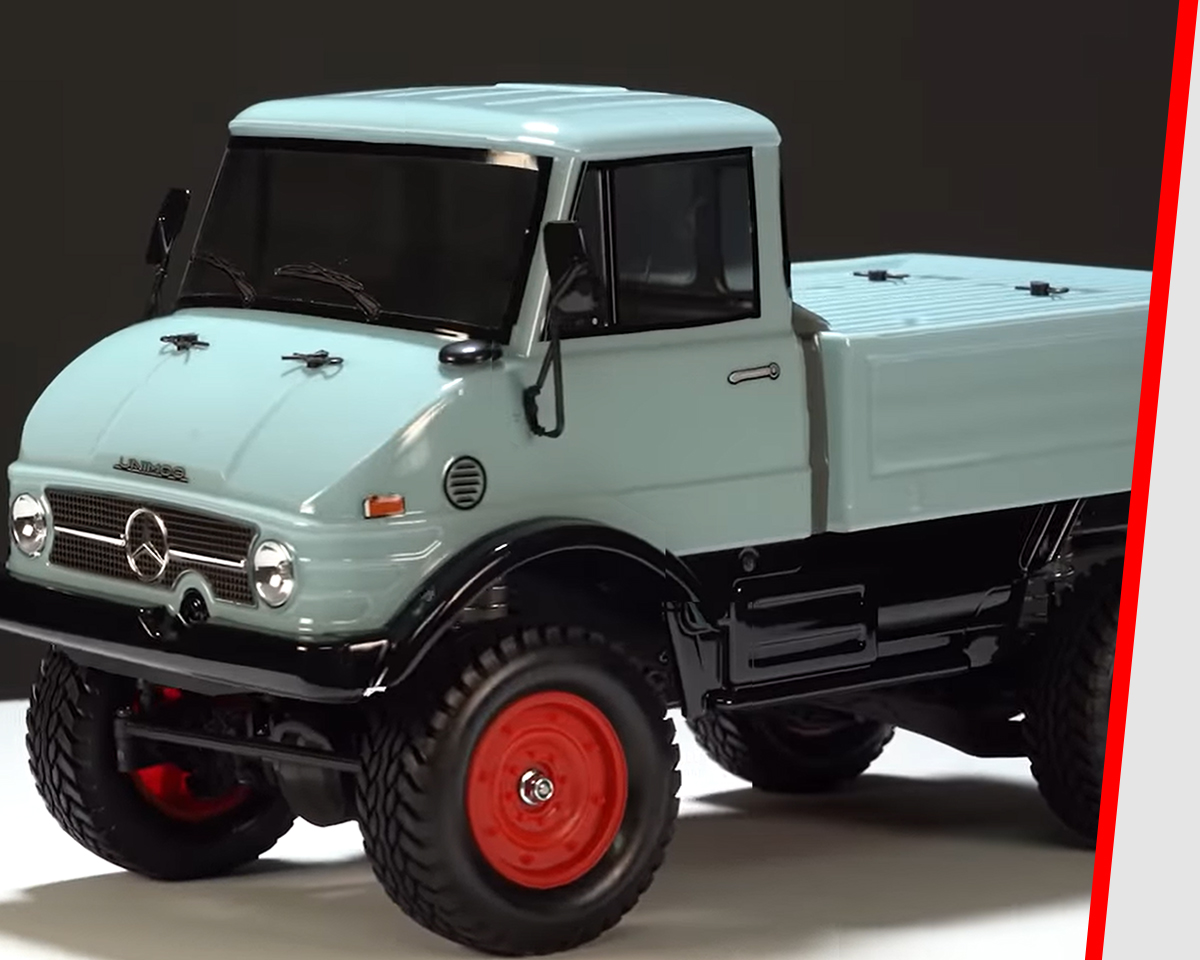 This is the Farm King wheelie. It’s built off the WR-2G chassis, a two-wheel drive, mid-motor setup. It uses a lexan body with a lot of scale features. There’s a hard plastic driver inside that you can paint, and the chassis uses a fully independent suspension with a bar in the back. It’s meant to be a wheelie popping machine. 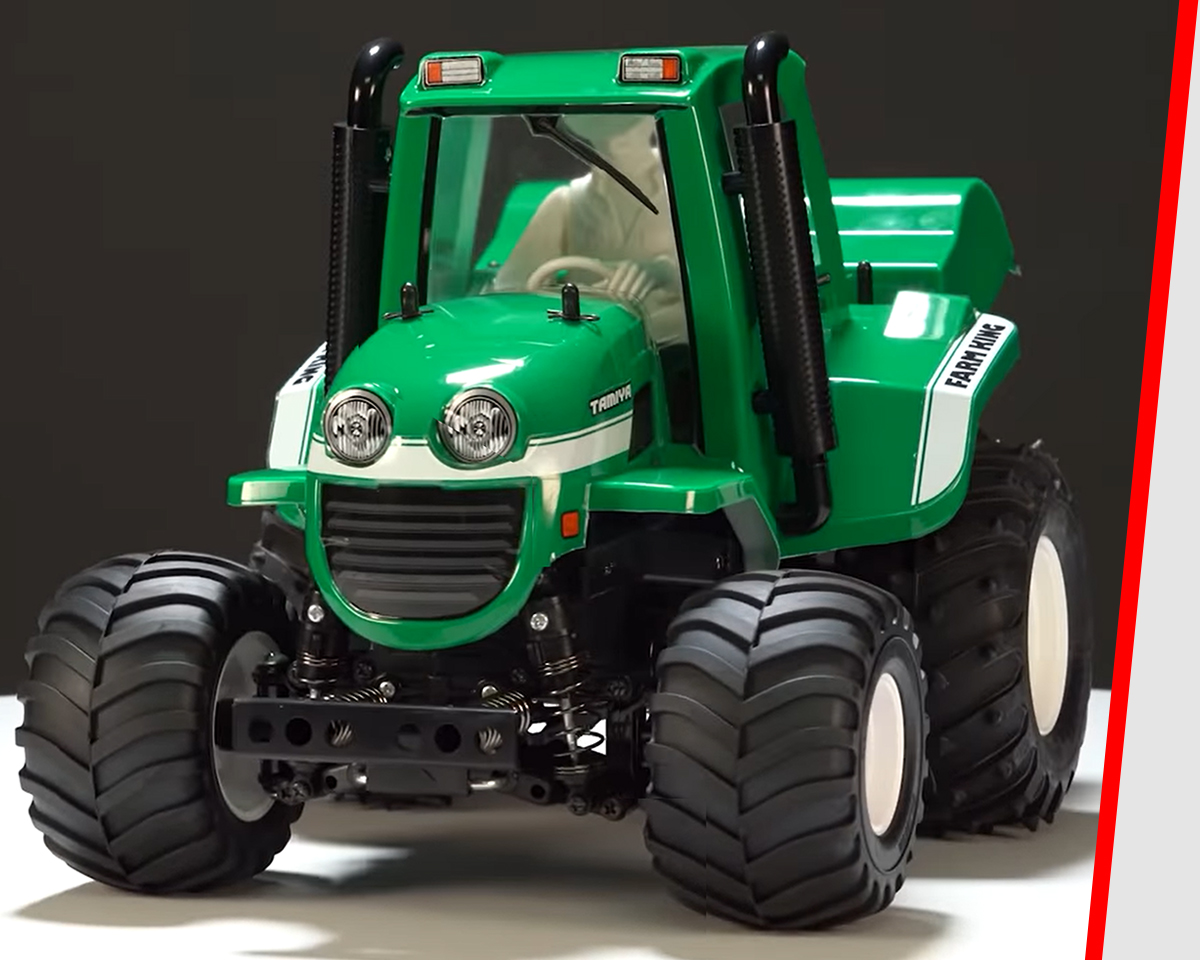 This is the famous Blackfoot, initially released back in 1986 and then re-released in 2016—this is the 2016 version. It’s a 1/10 scale, two-wheel drive monster truck that uses the Blackfoot III body, mounted on the 2015 re-release Monster Beetle chassis. The truck also has independent suspension, and the rear end has a trailing arm setup with boots over the driveshafts. 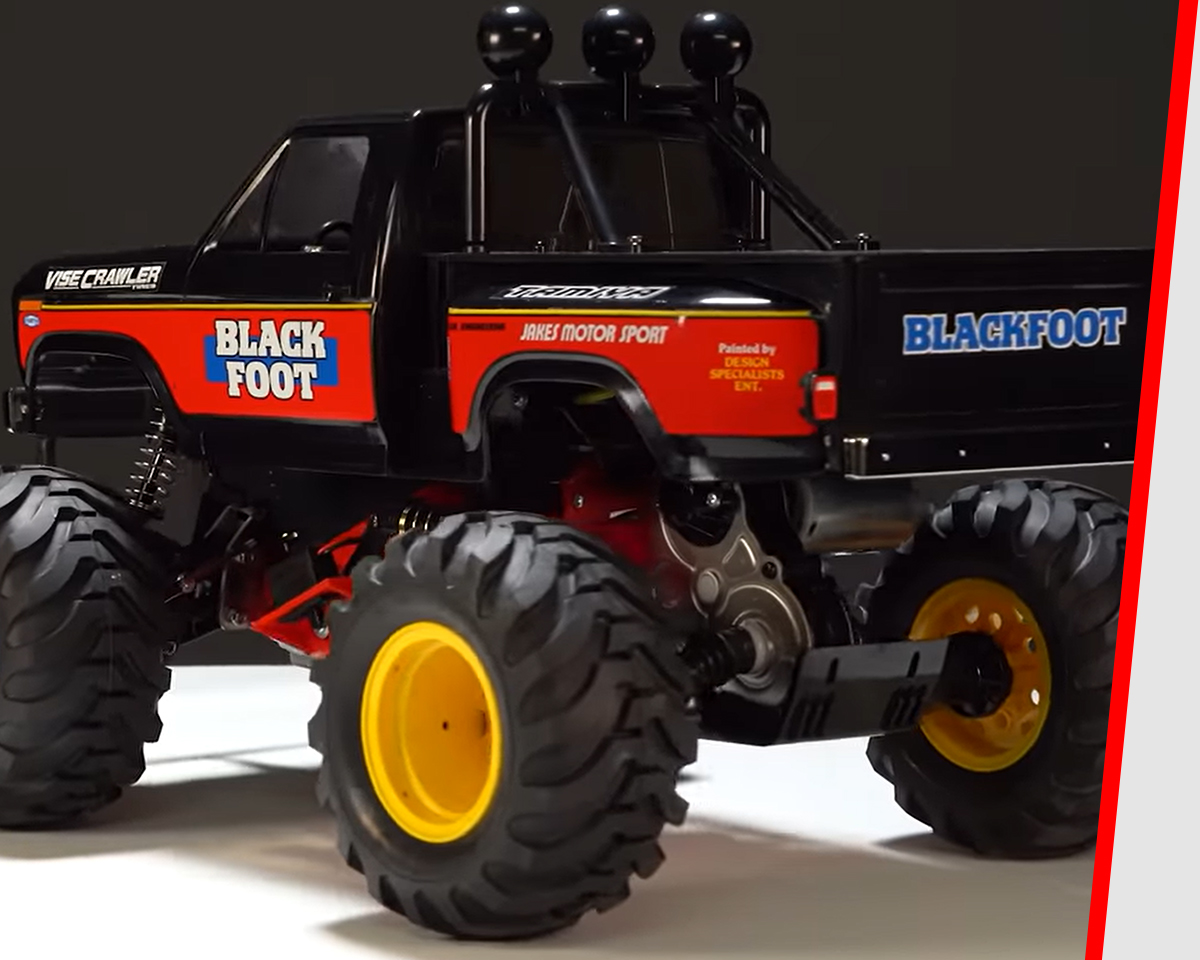 This big dude is the King Yellow 6x6 truck. It’s a 1/18 scale kit that uses the G6-01 chassis. It has 6x6 drive gearboxes with a front, center, and rear diff. The King Yellow uses a fully independent suspension all the way around and features all-wheel steering—if you have a transmitter that has a 4-wheel steering setup. You might notice on this truck that it does not have the original shocks. 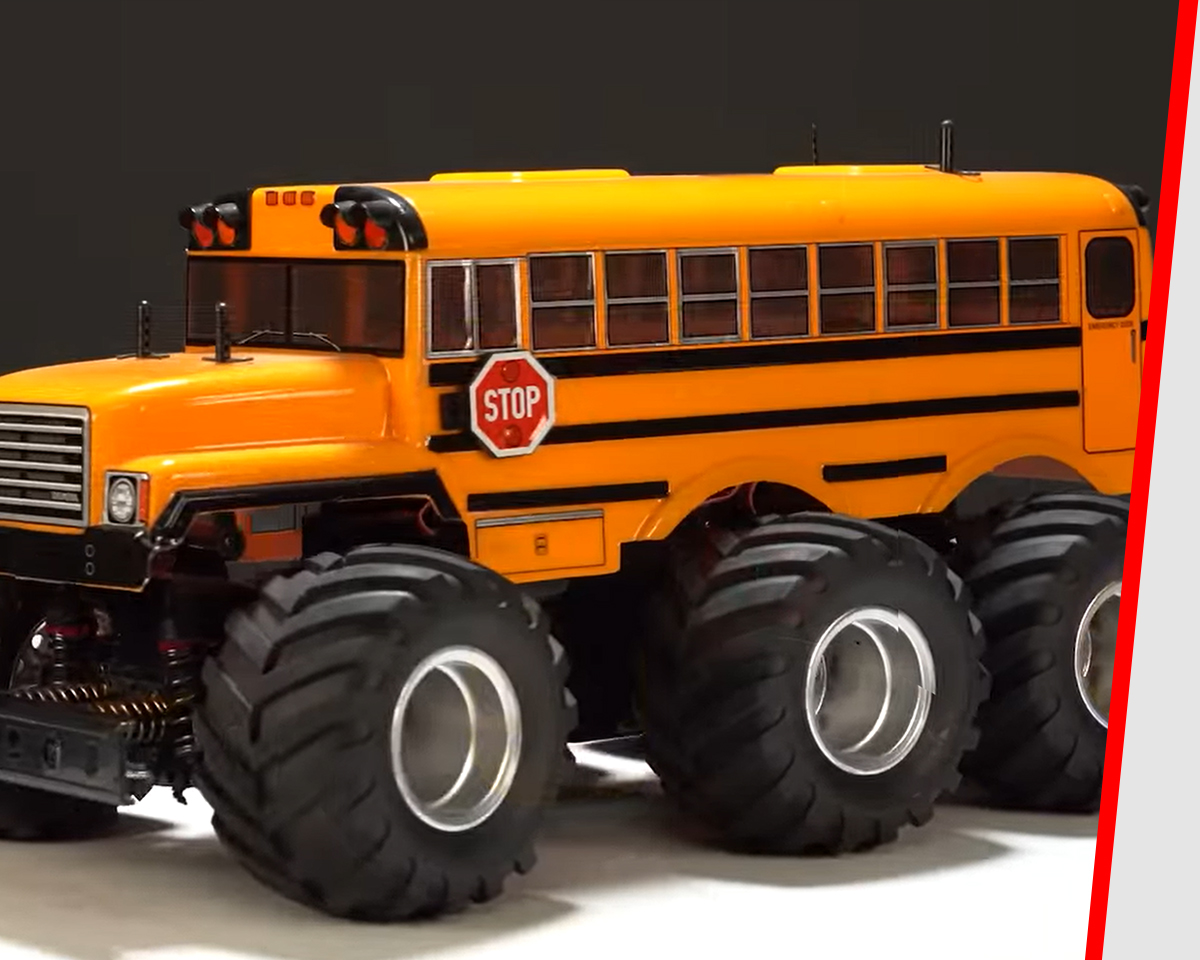 This kit is the main reason James started collecting these vehicles in the first place. After seeing a Lunch Box at a hobby shop as a kid. He knew he had to have it one day, which has led us here. The Lunch Box is a 1/12 scale, two-wheel-drive monster truck, originally released in 1987, and this is a re-release. The Lunch Box features the iconic hard plastic boxy van body with metal-plated bumpers, grille, side guards, and more. Now, the body is a hard plastic design, so it’s a little bit easier to paint on your own. Also, the body is screwed onto the chassis sides, so it looks more scale realistic. 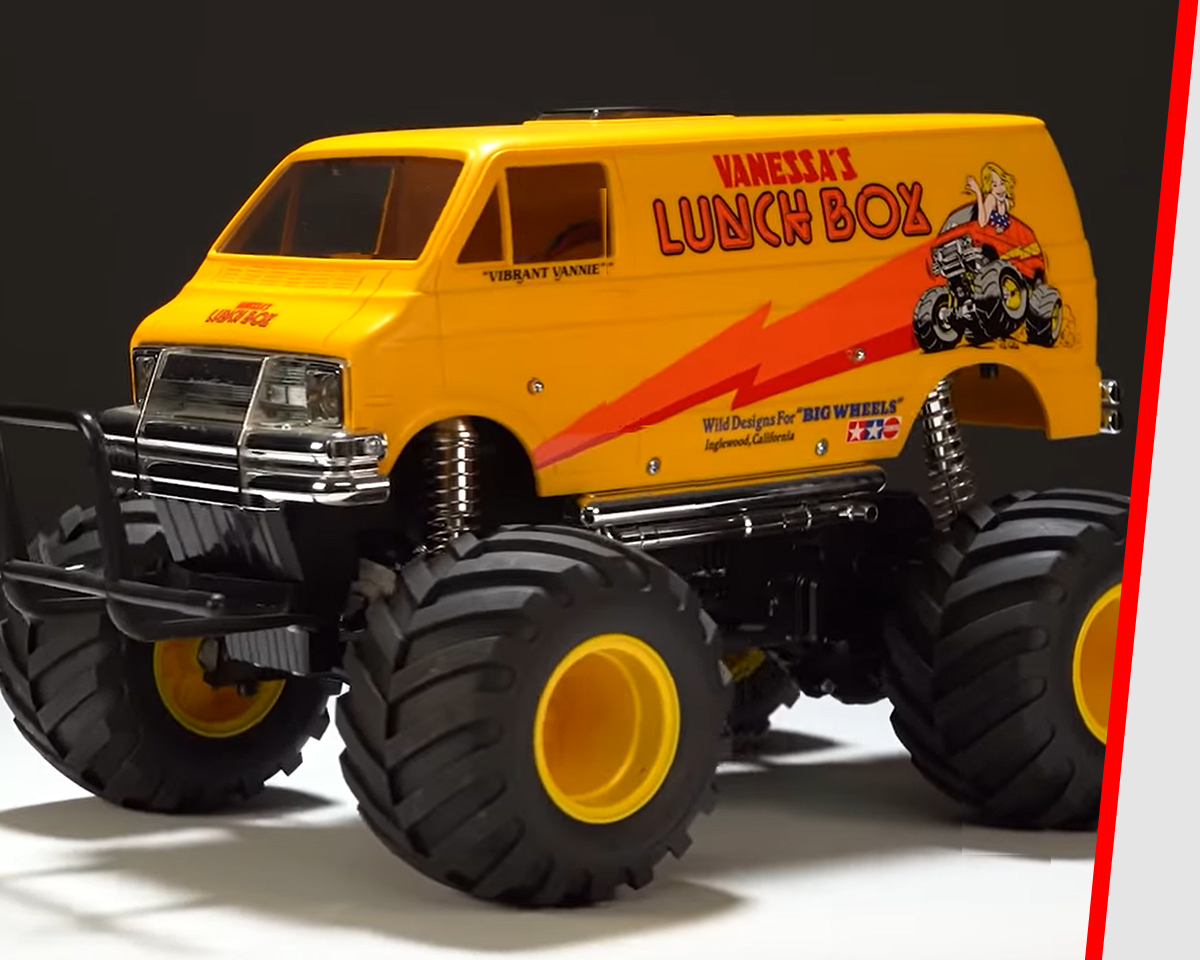 Below is the Lunch Box Black Edition. It’s the same as the original. It just comes with a black painted body and black wheels. Next is the Lunch Box Red edition. It has a red painted body, white wheels, and white plastics. Finally, we have the Gold edition, perhaps the most sought-after Lunch Box. It has a gold chrome colored body with matching wheels. 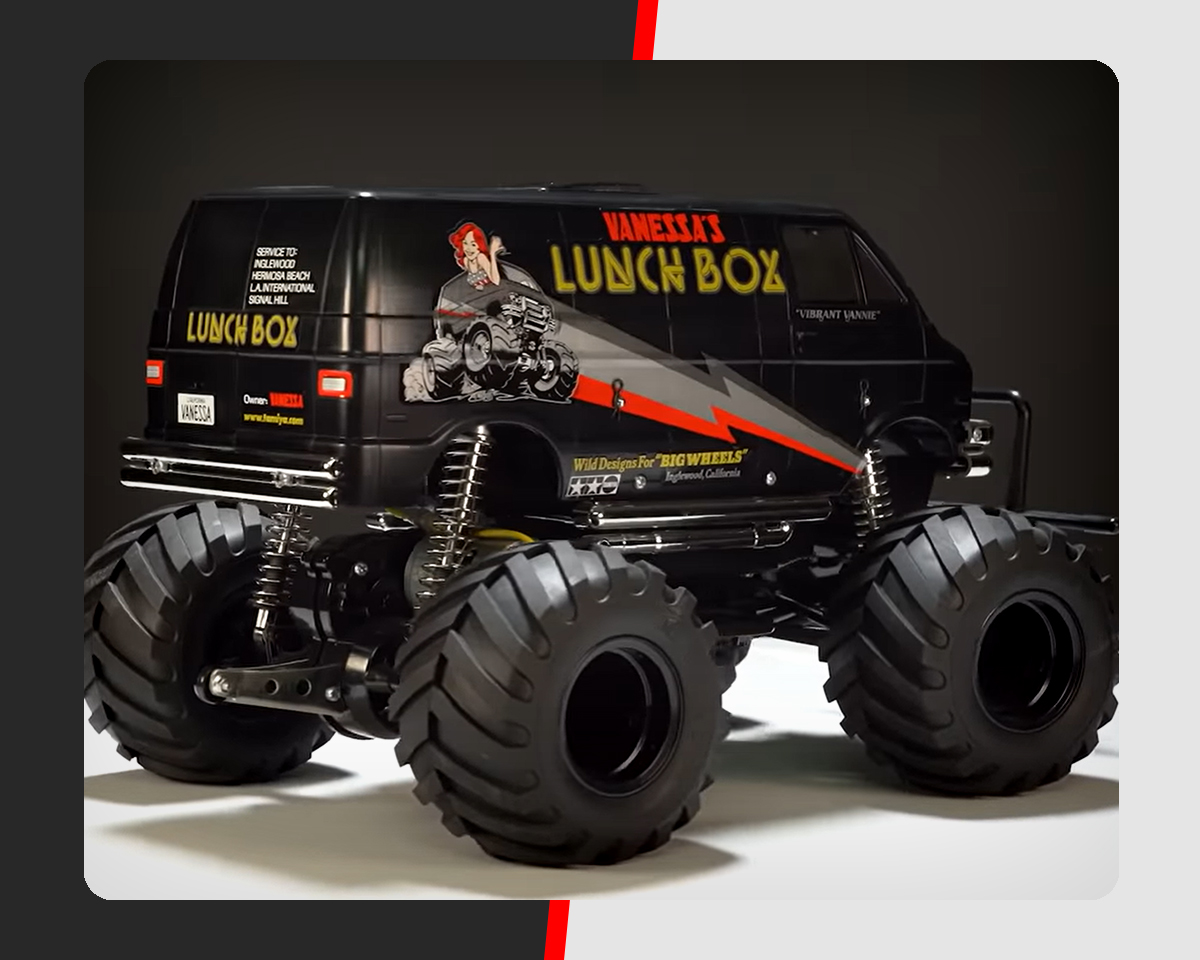 We know many of you probably recognize this truck—it’s the Midnight Pumpkin. Initially released in 1987, it is a 12th scale, two-wheel drive truck. The Pumpkin uses the same chassis as the Lunchbox but uses a 50s style American flatbed truck for an alternative look. The body is hard plastic and is detailed with light buckets and chrome parts. Interestingly, the body posts pop up through the front wheel wells, so they’re less obvious, and the result is a pretty clean look. 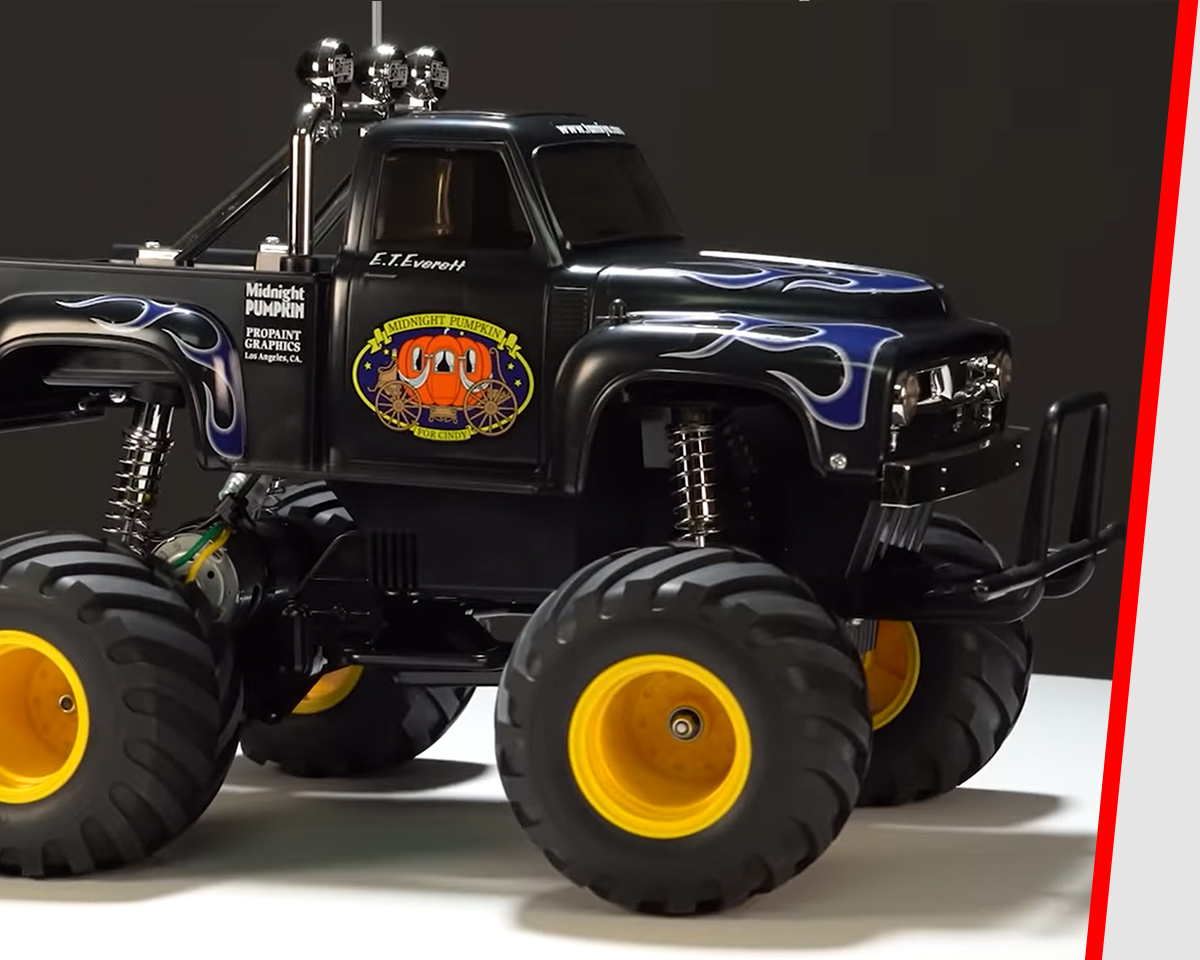 This special truck is the Midnight Pumpkin metallic kit. It’s the same as the original truck, but it comes with a pre-painted chrome body with matching wheels, and it looks fantastic. 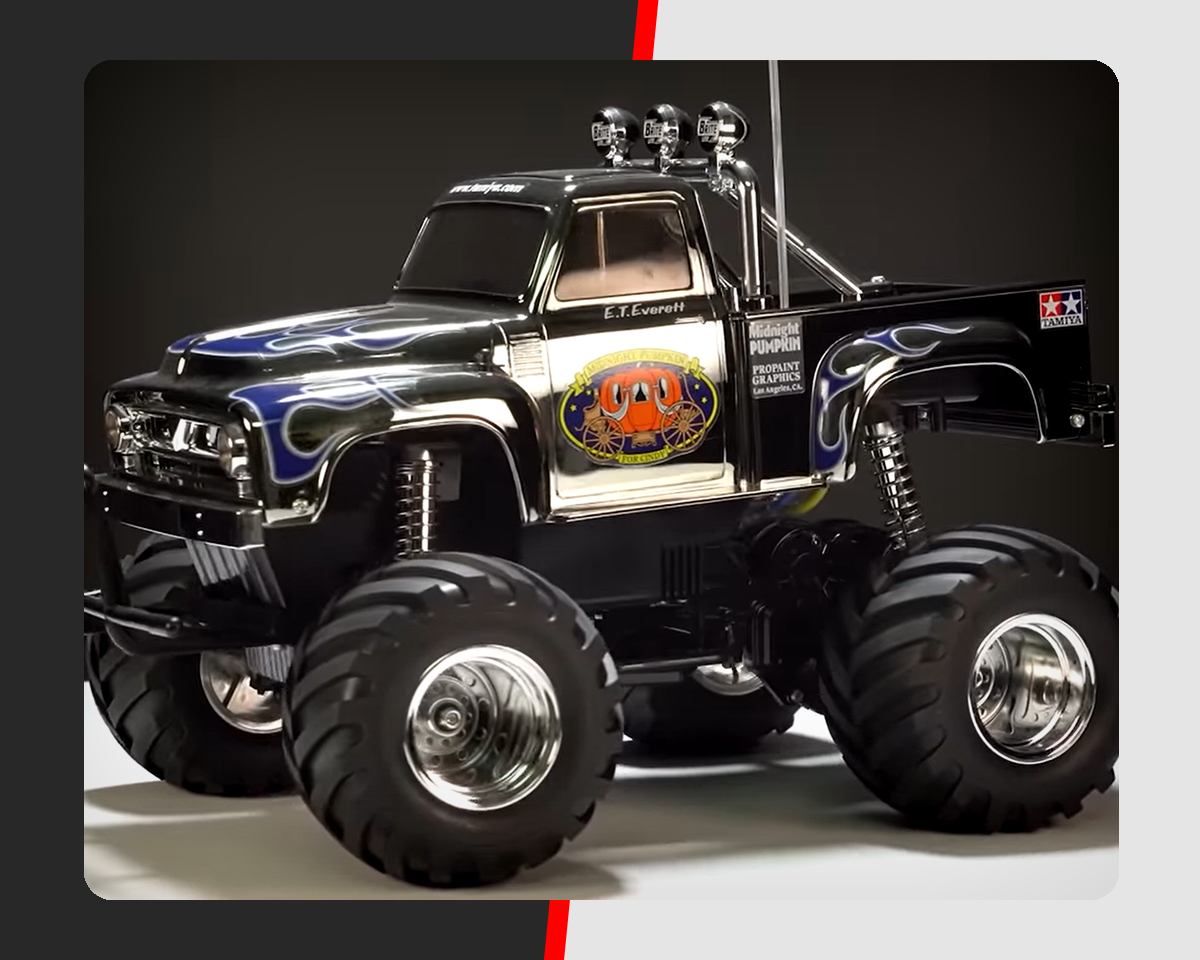 The Monster Beetle was originally released in the 1980s and re-released in 2015. The car features a hard plastic Volkswagen scale body with a driver, light buckets, and more. The chassis has an independent suspension in the front and rear, using the trailing arm rear suspension with rubber boots. 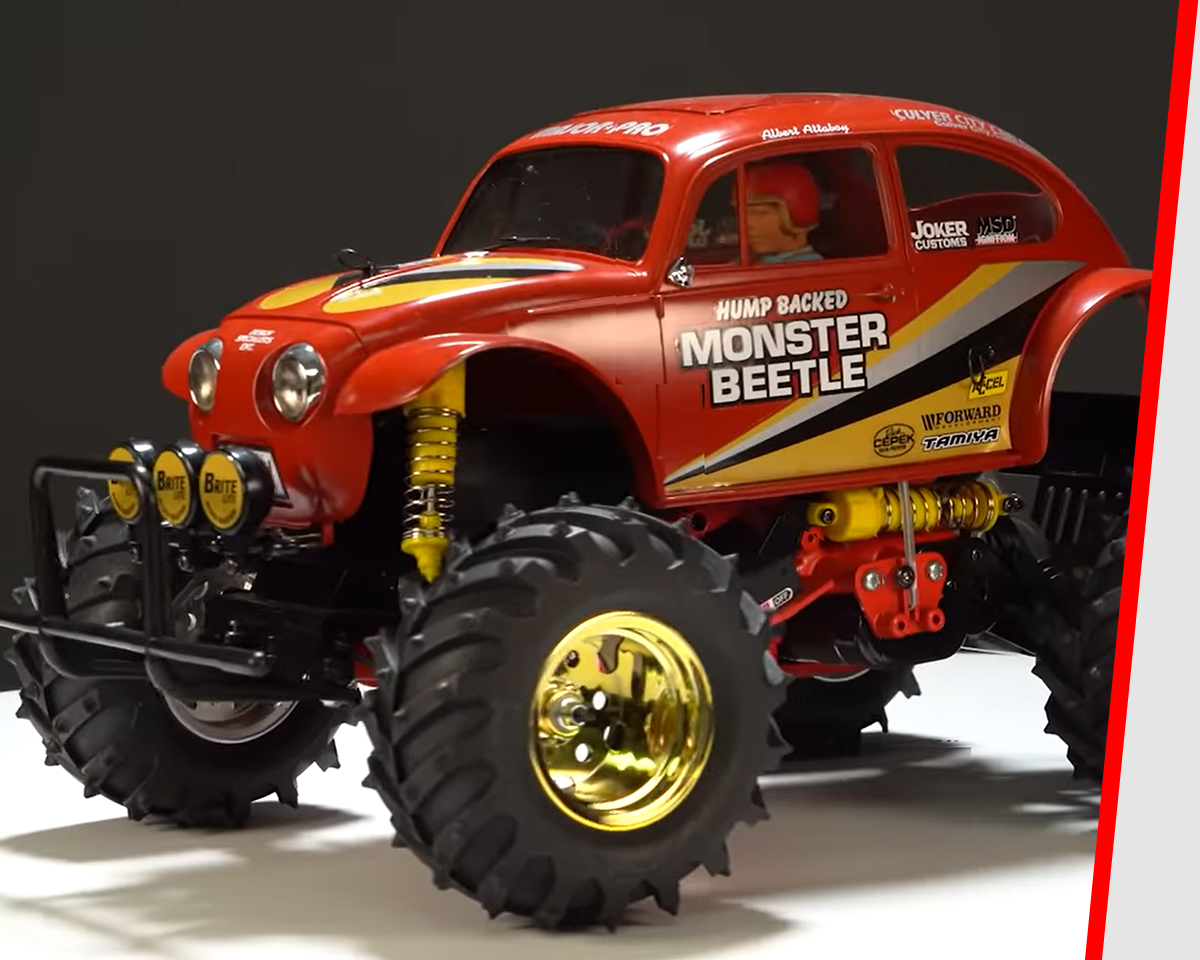 This is the Monster Beetle Black Edition. Same as the original, just slightly different color. It has a black body, different colored wheels, and the chassis plastics that were previously red are now black. Sadly, this edition is discontinued. 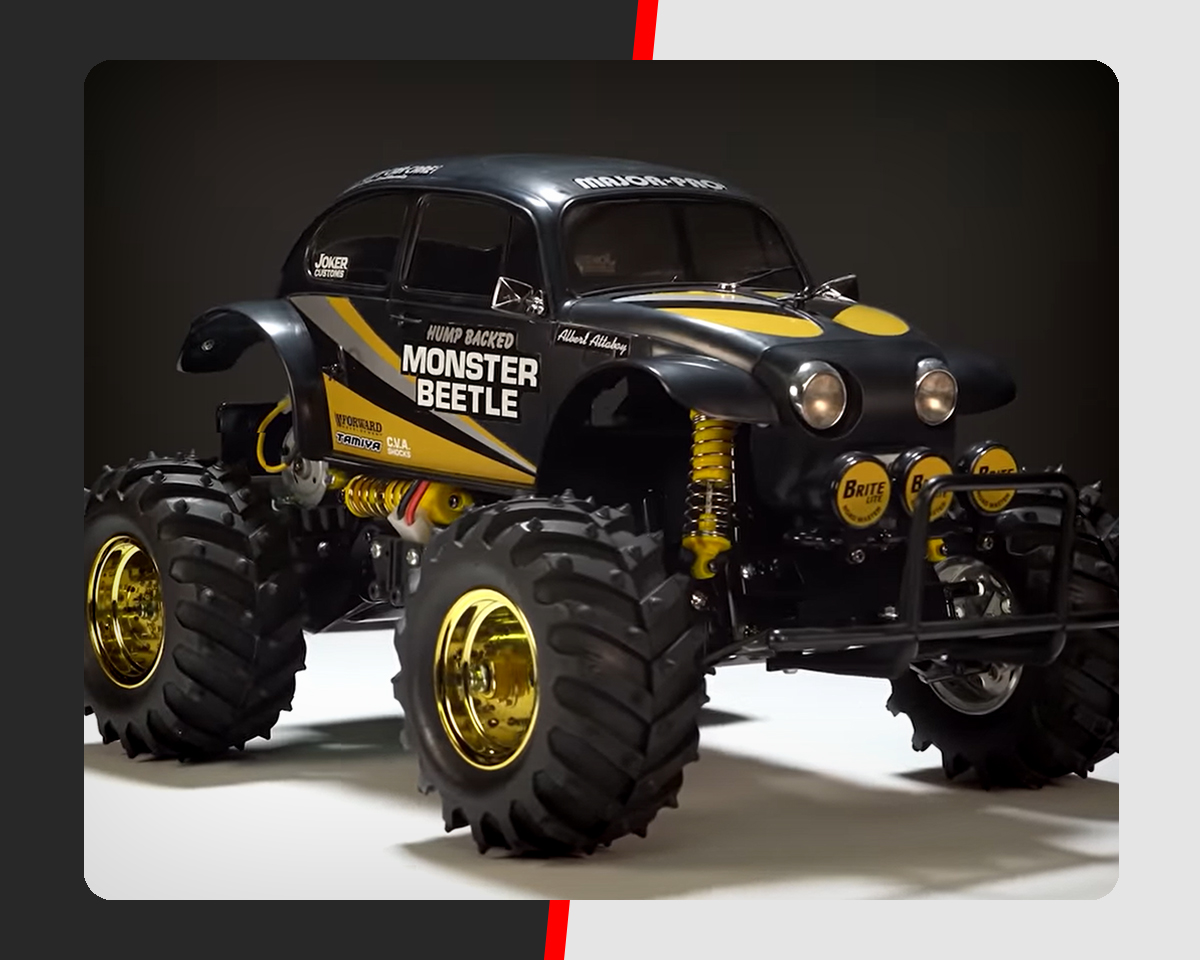 Up next is a big boy, and it is the Bullhead. It is a 1/10 scale four-wheel drive kit. Made of hard plastic, the body was inspired by American tractor trucks—it has metal-plated parts and scale details attached throughout the kit. The chassis is a bathtub frame with a four-link independent suspension and a motor on axle set up front and rear with solid axles. It was possible to have four-wheel steering with the Tamiya Bullhead. However, this truck has been discontinued. 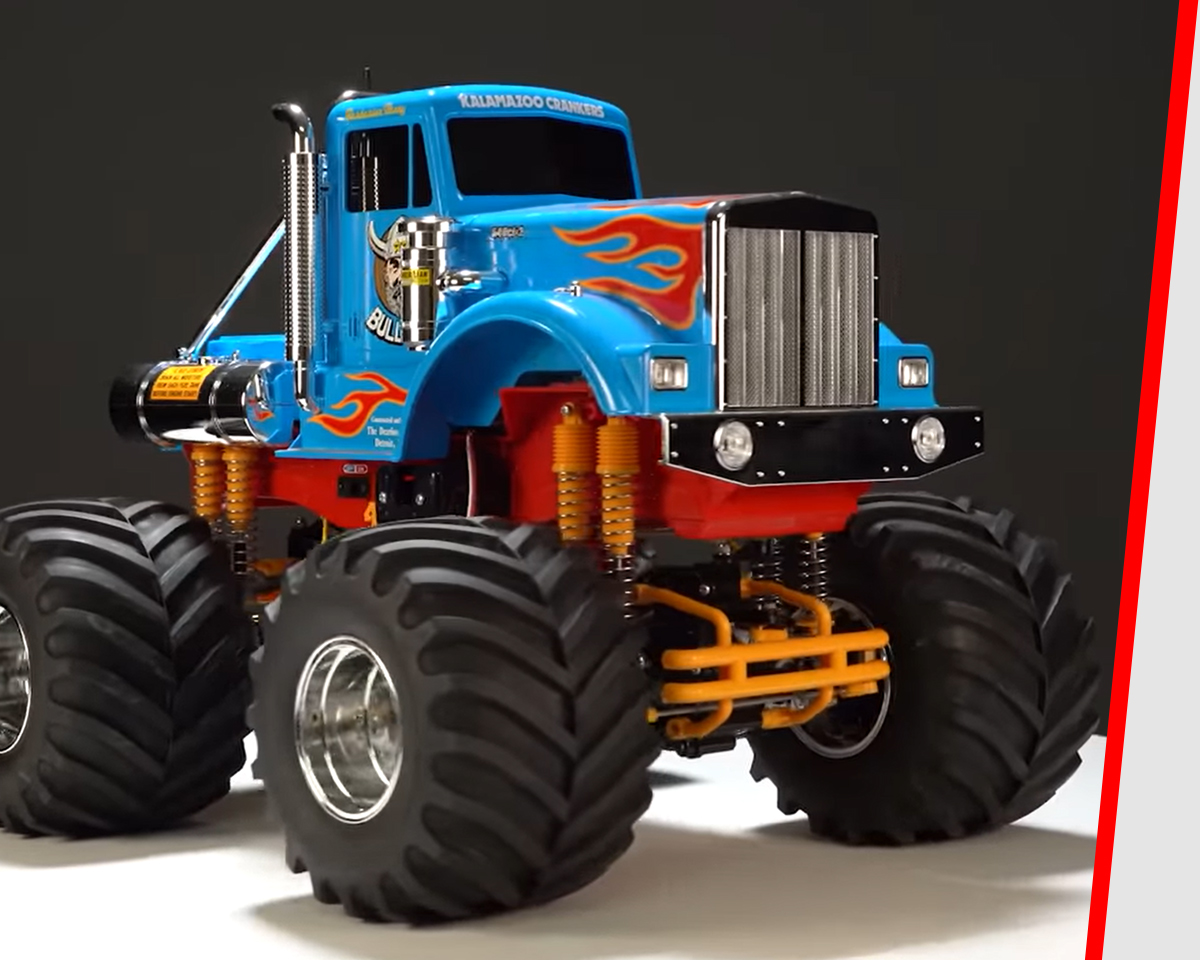 Last but not least is the Ferrari F189 late version. Released in 1989, this 1/10 scale rendition was the first Formula One car to use Tamiya’s F101 chassis that incorporates a ball differential. It was considered a significant improvement over the F1 and F2 Tamiya RC frame designs. The fiberglass reinforced plastic (FRP) semi-double deck frame has a T-style engineered motor mount and incorporates a single coil over oil-filled damper. 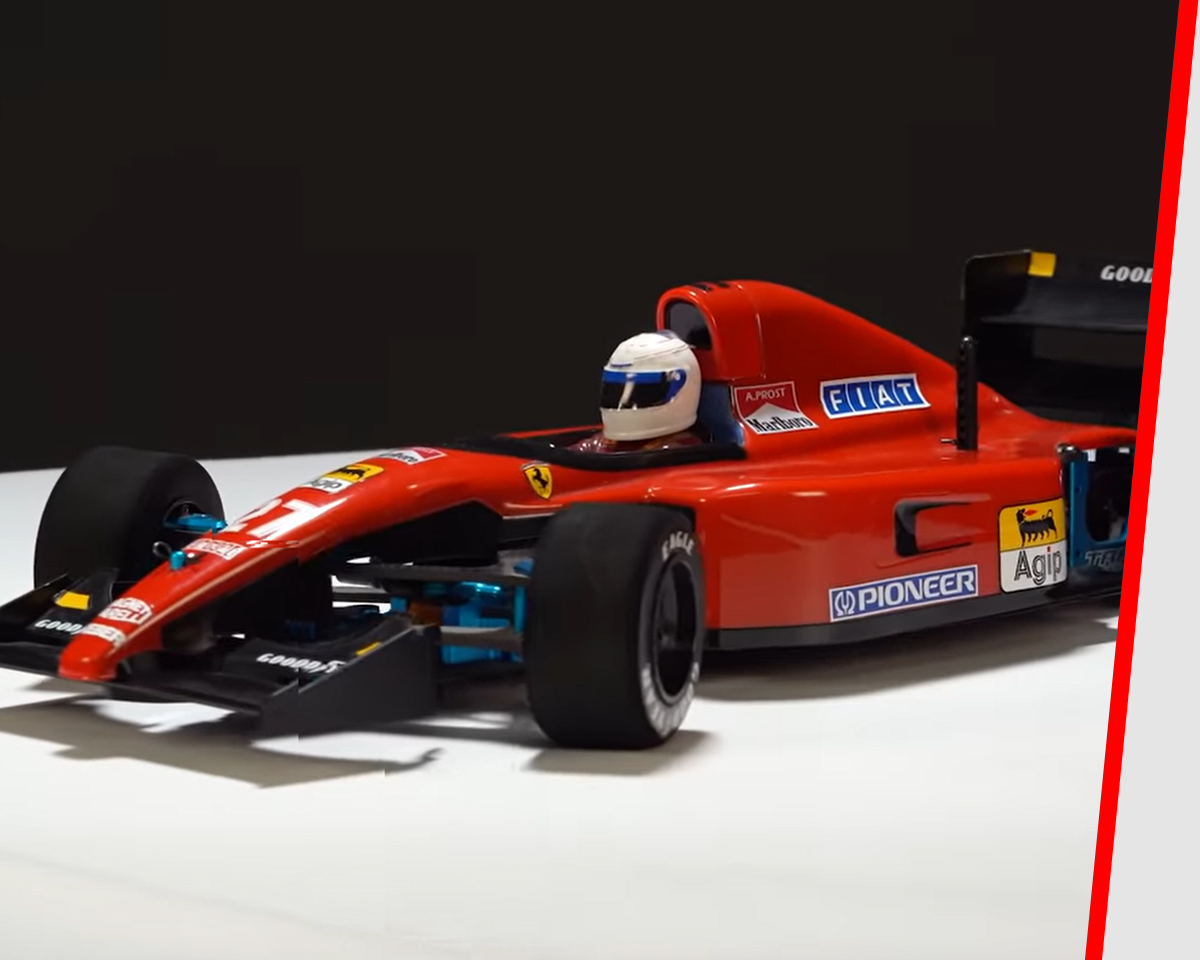 Want to see more Tamiya RC cars? Watch the video on our YouTube channel, and while you're there, be sure to check out our new product review and how too videos.