If you could make the perfect R/C battery, what would you make? Would you want more punch and power, or how about more capacity and runtime, or maybe both? Well, this is precisely the question ProTek RC faces when creating their high-end competition-grade lipo packs, which are meant to represent the best of the best, but how do they determine that? We went behind the scenes of ProTek RC to see how they test their batteries, the data they collect, and why it matters.

Not many people know it, but ProTek RC is a brand of AMain Hobbies created in 2005 to offer racers high-end products for competitive use. The selection was pretty thin in the early days but quickly grew to where it is at today. ProTek now offers a thousand different items, including servos, engines, and accessory LiPos, available online and in over 400 stores in the US and worldwide. 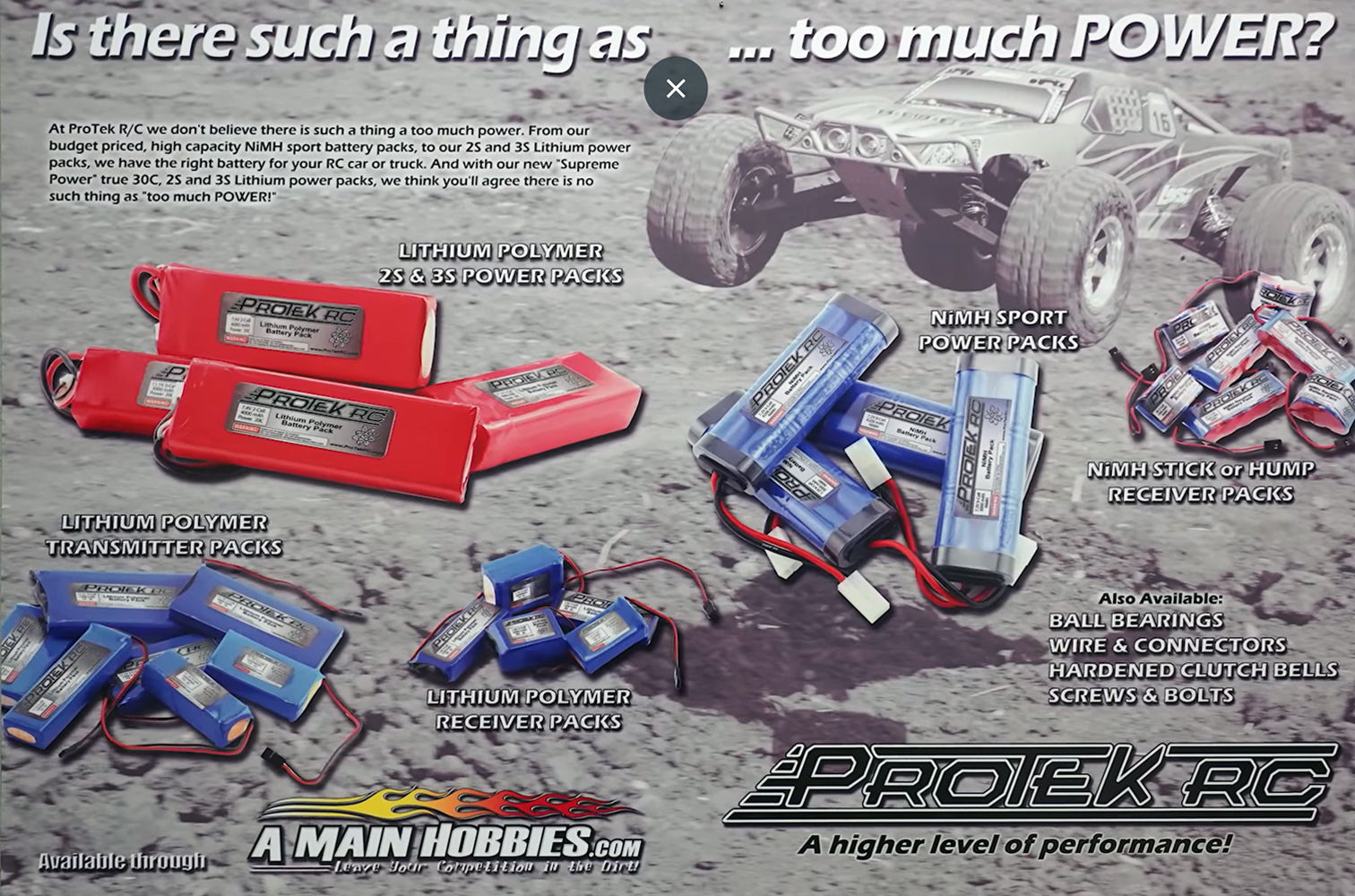 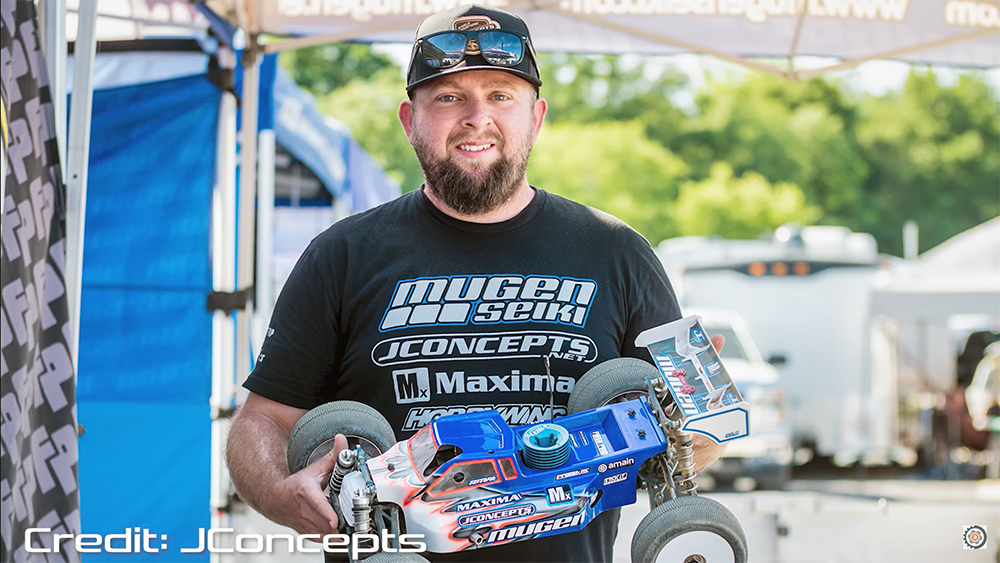 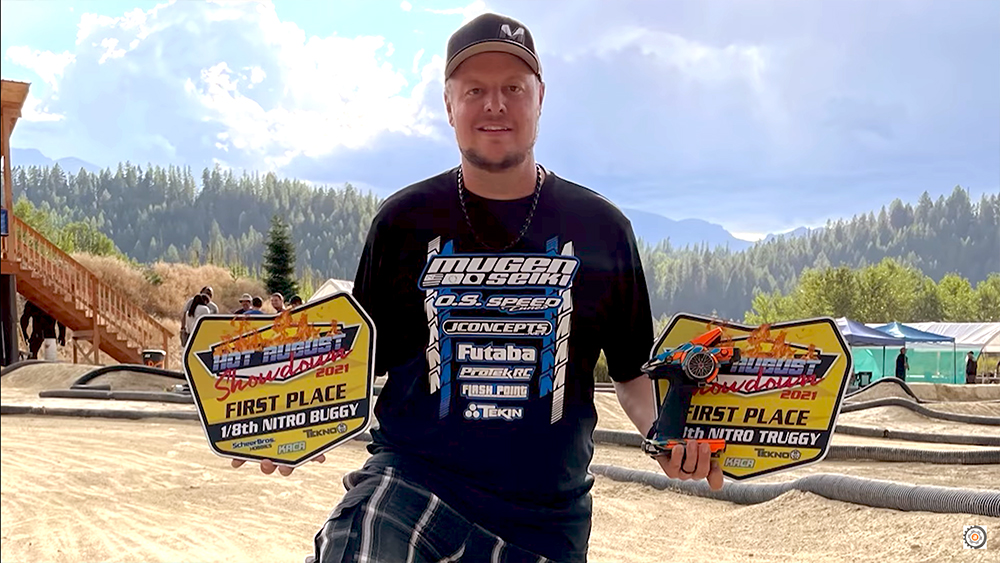 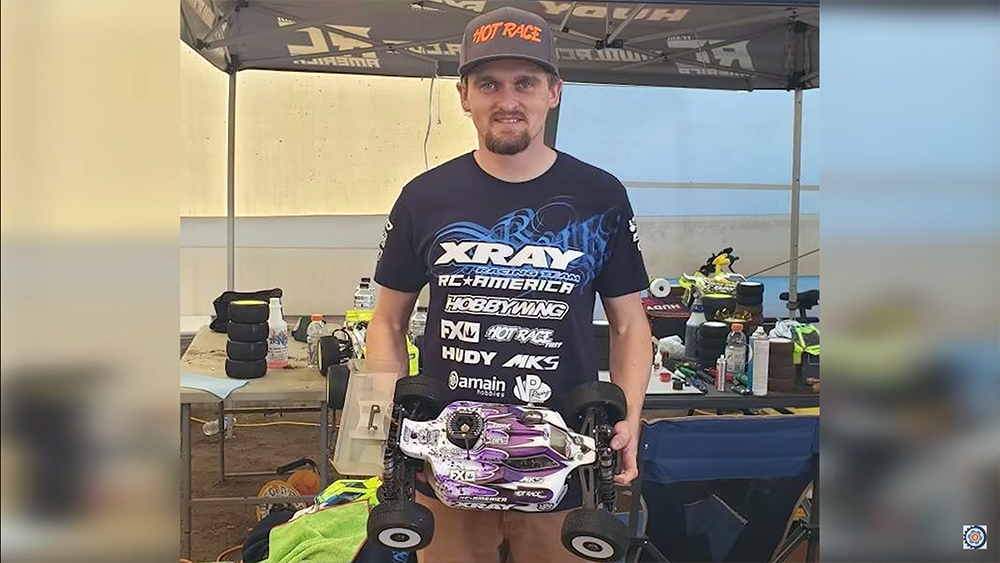 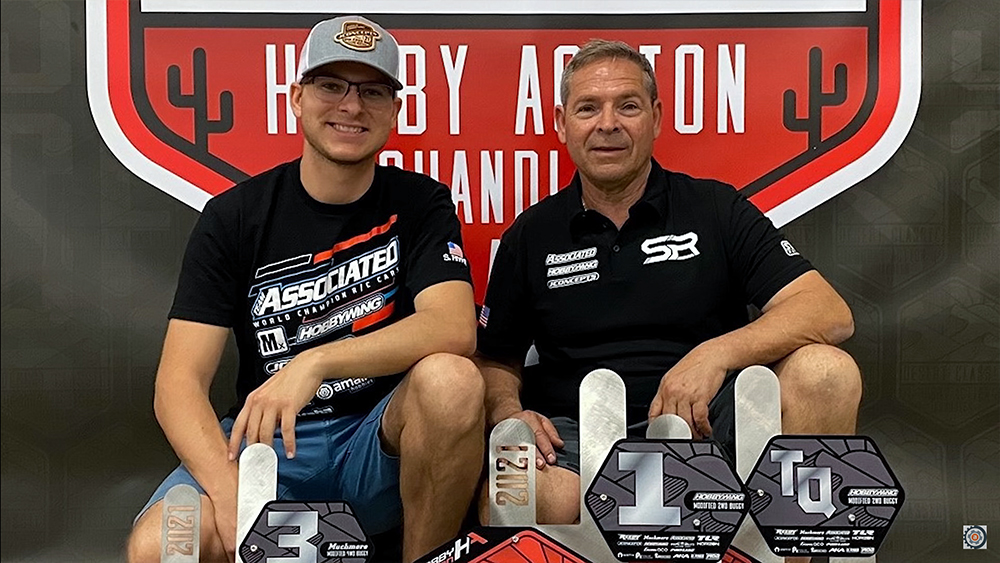 While also offering many specialty race packs, like the:

(All packs are made specifically for their application due to team driver needs after a lot of testing.) 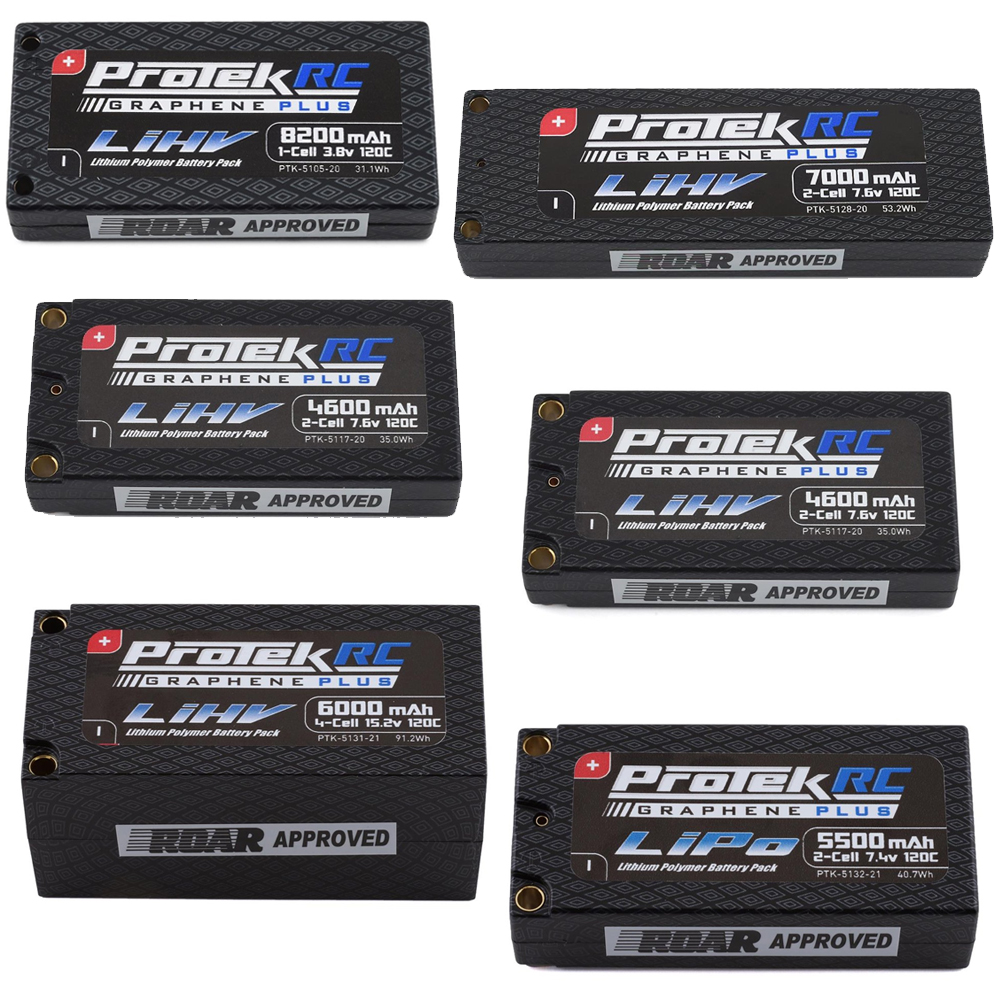 So, how are the batteries tested?

This process all starts inside the lab at AMain with sample batteries sent from our supplier. They've already undergone their UN38.3 certification when samples arrive, which is the United Nations standardization for safely shipping lithium batteries.

To be certified, a lithium battery must prove it can withstand each test seen in the left column, with the results reported on the right. If the battery can't pass this certification, it will never end up in the ProTek lab for further testing, but if it has, step 1 begins.

There is nothing fancy going on at this stage. It's just a gentle break-in cycle, fully charging the battery on the 625 Duo to its maximum voltage, so 4.2V a cell for regular LiPos, or 4.35V a cell if it's a LiHV pack. 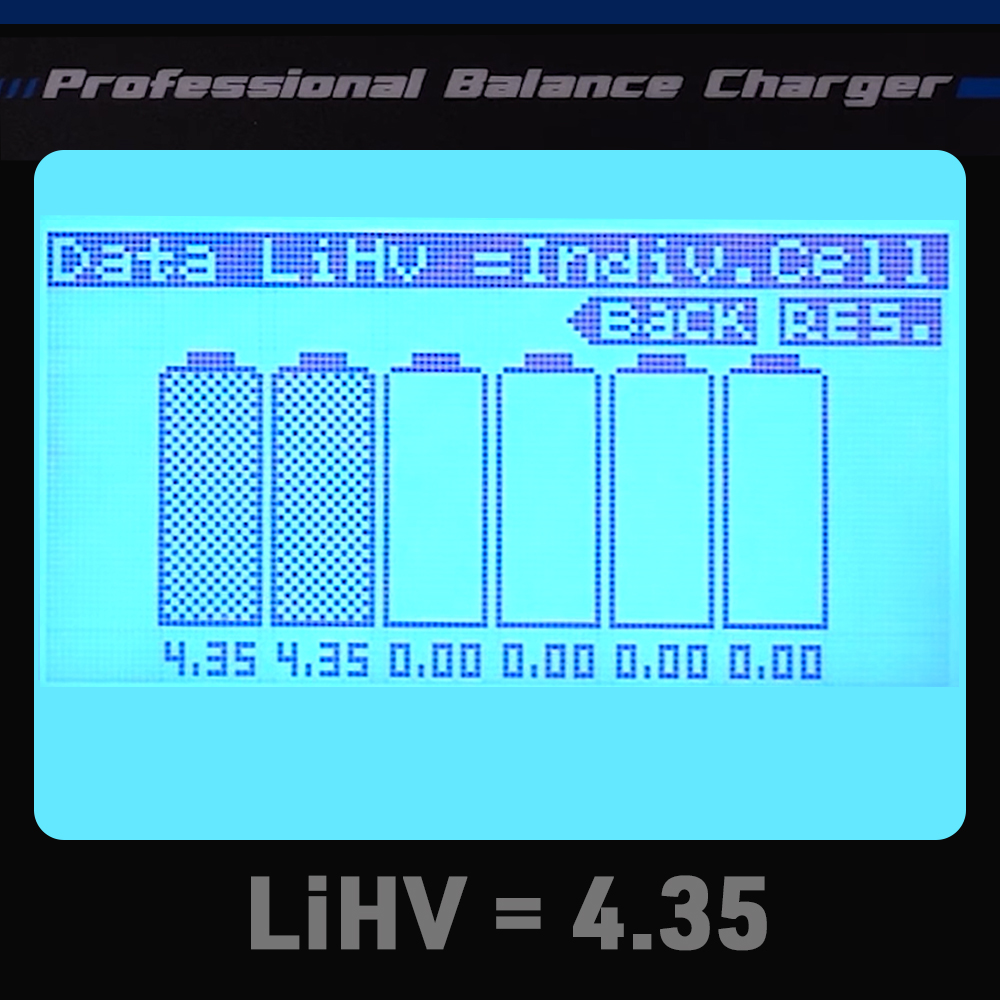 Once charged, the battery is placed on the CBA or (Computerized Battery Amplifier), a computer-controlled discharger, and it can hold a constant discharge amperage up to 35A. Still, we're only cycling in stage 1, so the battery is discharged at a constant 1C rate, down to 3.4V a cell. Once complete, the battery is left to cool back to room temperature, and this cycling process is completed 3 more times. 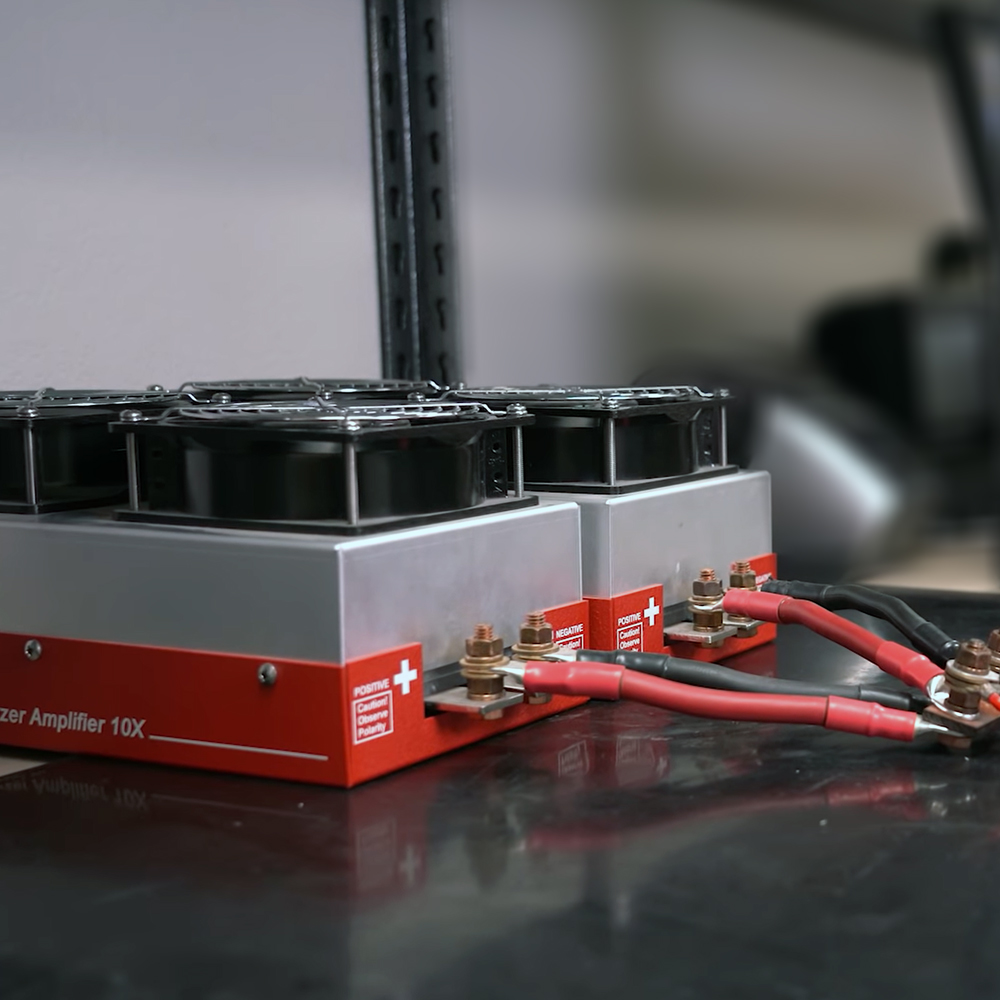 Chad Bradley is our ProTek manager. He's also a professional R/C racer, handles all the testing, and works with the team drivers. Chad and his team found out the internal resistance of the packs can lower after cycling the packs in, so that's why this is done. 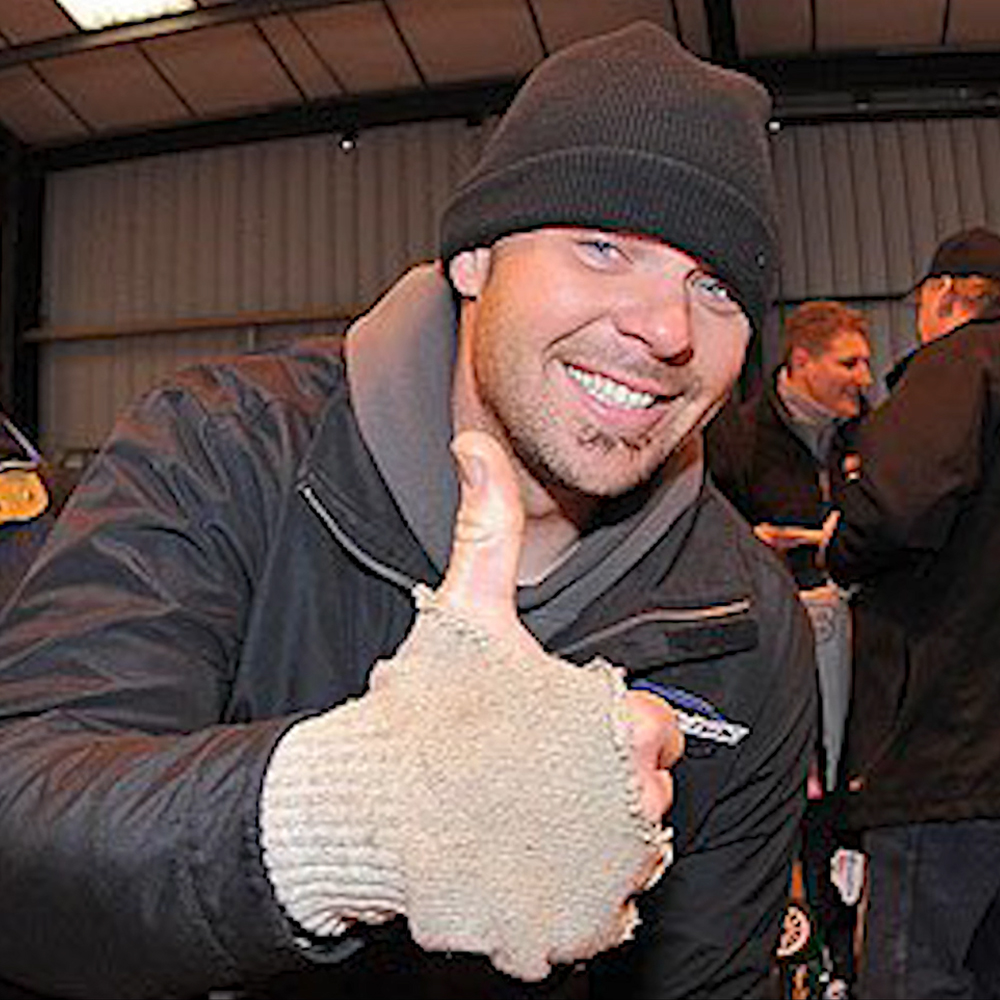 For step 2, things become a bit more serious as we move on to the performance testing and graph data collecting, measuring the battery Amp-hour capacity, voltage hold, and resistance. Again, the battery is first fully charged at 1C to its max cell voltage, 4.2V a cell for regular LiPos, or 4.35V a cell for a LiHV pack. But this time, when the battery finishes, Chad will verify two variables:

1. First, the battery pack is charged to its exact voltage, down to the hundredth of a volt; this means 4.19V a cell is not acceptable. It needs to be 4.20V per cell. If it's not, it is fixed because all batteries need to start at the same place to get a sound benchmark. In other words, they need to be tested consistently. 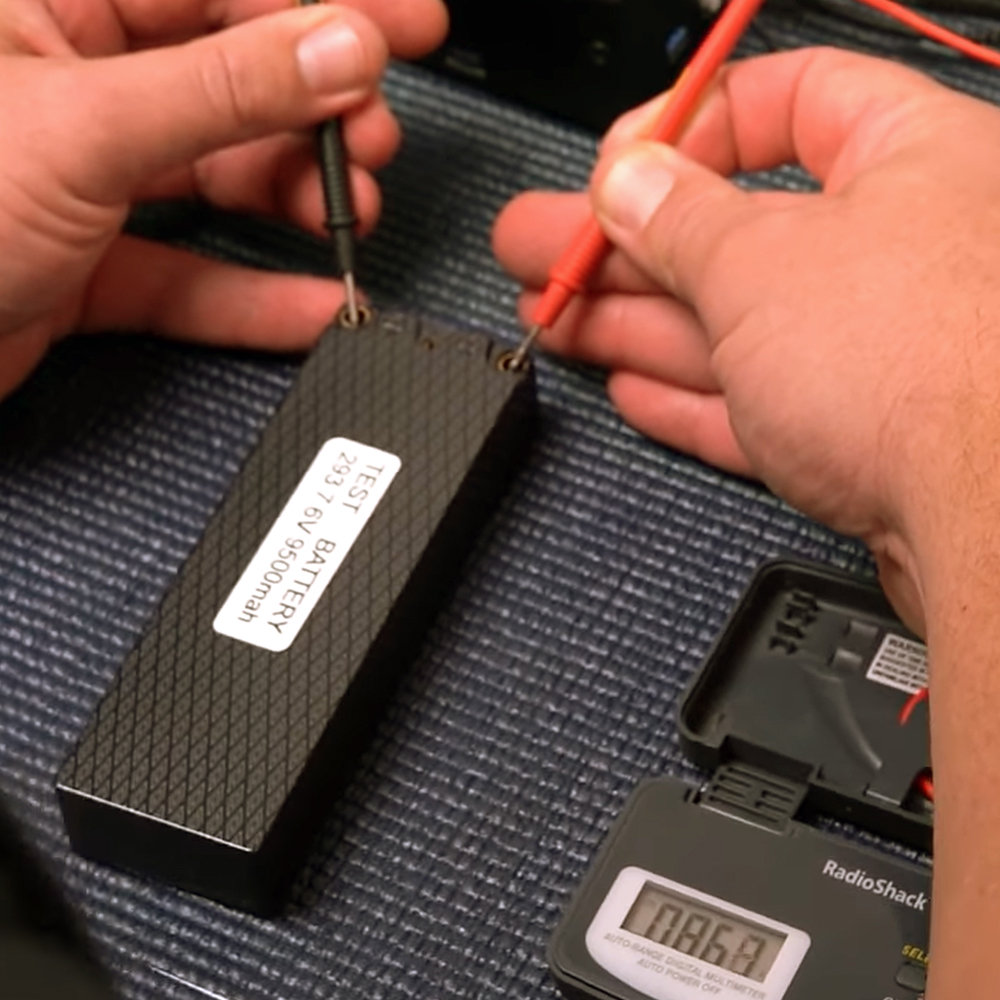 2. The second variable is even more critical, and it is the temperature of the battery pack. As many of you know, a LiPo can warm up when charging, and we don't want that because it skews results. So to proceed further, the battery needs to be at the same temperature all the other batteries have been tested at, about 72°F/22°C or about room temperature, and if it's not, it sits until it is. 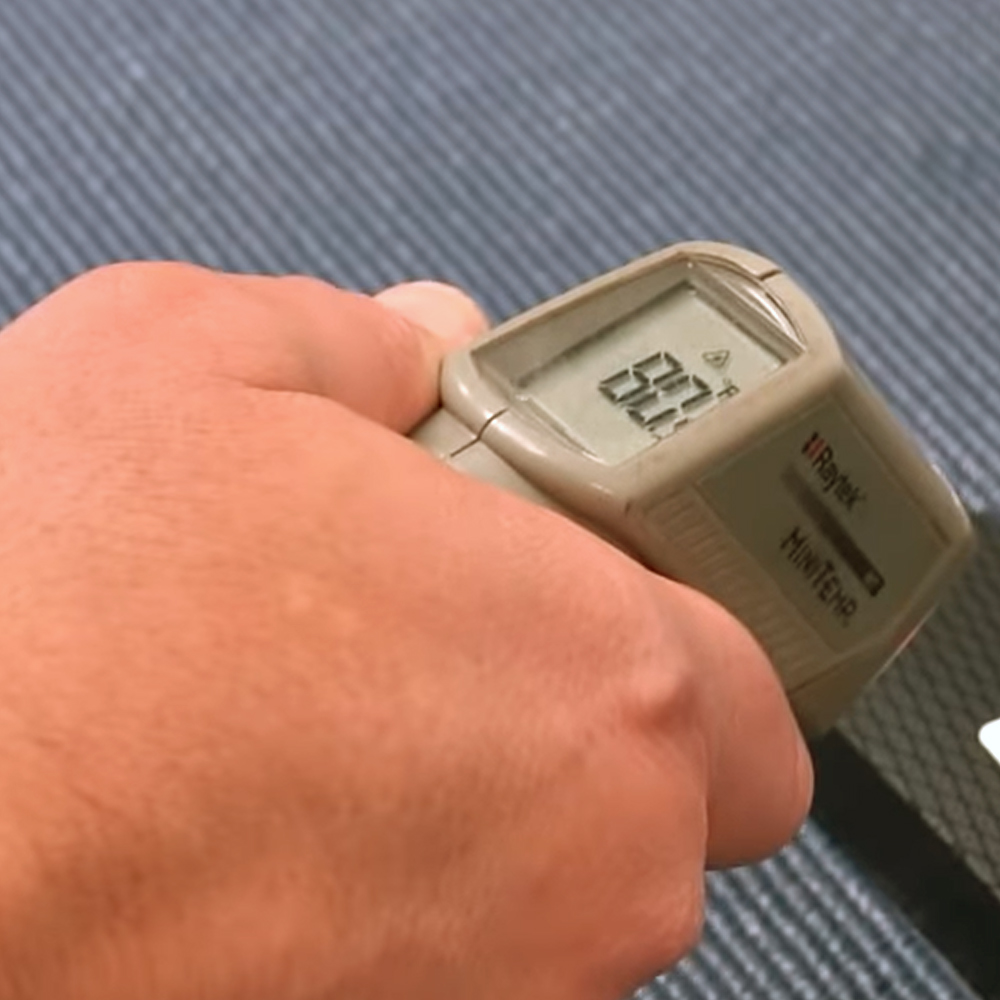 To give you an idea of what temperature can do to battery performance. This graph shows the same battery tested twice at different starting temperatures; green was at 75°F when discharged, and red was 40°F when discharged. The green line is what you'd expect to see, with an initial voltage drop off before it tapers off and stabilizes. With the red line, the initial voltage drop is huge, which translates into the vehicle feeling like it has no punch or flat, but then the battery voltage comes back up as the battery warms itself from the inside out. The warmer battery test provided more voltage, more capacity, and lower internal resistance in this example. 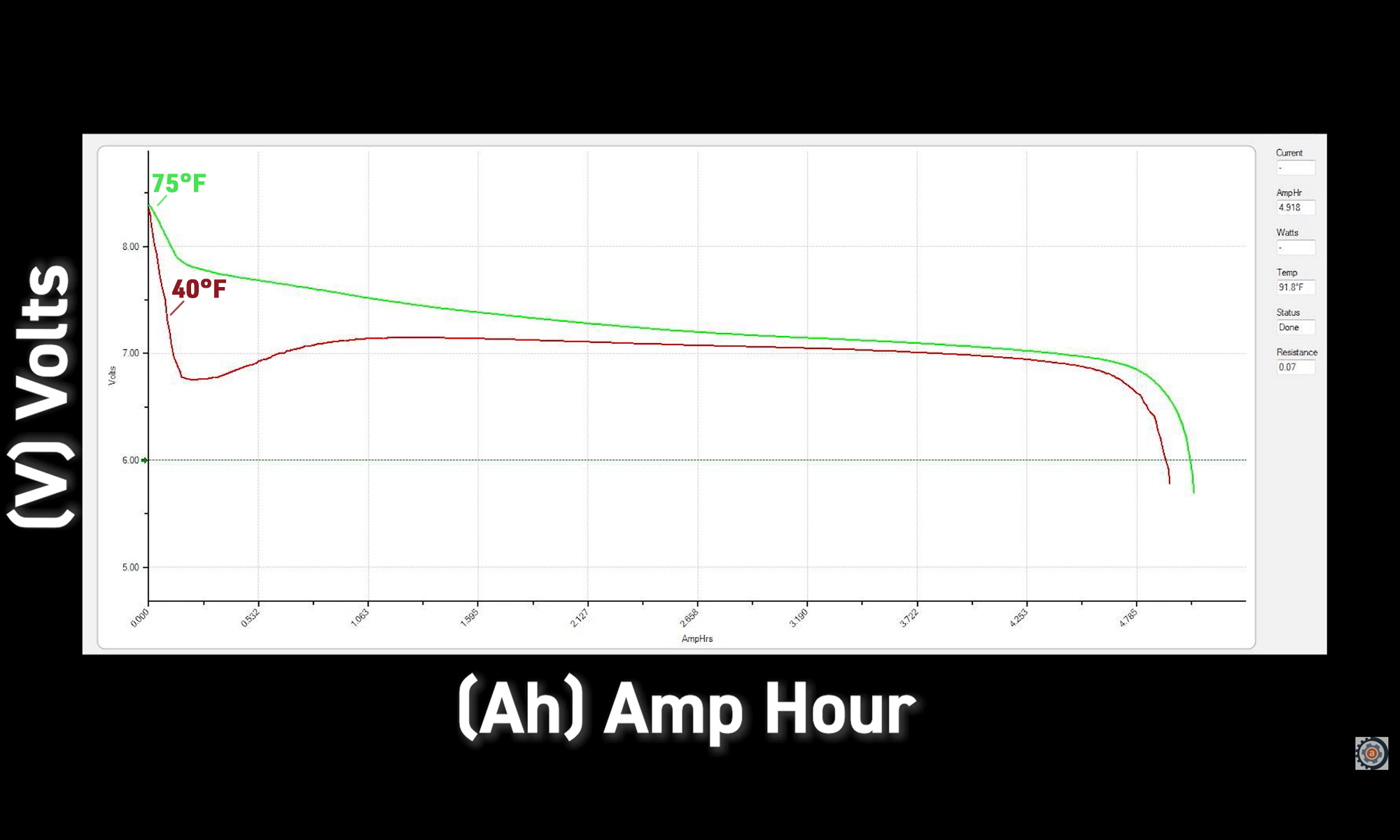 Battery temperature is a big deal, and that's why all batteries must be not only the same end voltage but the same temperature before they can move on.

Once these variables have been confirmed, the charged battery is placed on the CBA and discharged at a constant 35Amps. Down to 3.0V a cell.

While it's discharging, the computer software collects how many amp-hours the CBA has pulled out of the battery. And how well the battery voltage holds up to it. In this graph, the internal resistance of the battery is also collected. (See right side of the image.)

Once the battery is drained, the graph of data is done! And it can be saved and cataloged as test 1 for that battery sample, but it's just the beginning. This 35A constant discharge test needs to be performed 3 more times, and at the end of it all, all four data sets are averaged out, and Chad rates the battery.

For batteries that are not LiHV, Step 2 of testing is done. BUT - if it is a LiHV pack, all the testing of step 2 needs to be done four times, with the battery charged at 4.20V per cell.

This enables ProTek RC to provide battery specs at high voltage and regular voltage levels for LiHV batteries only. Of course, it takes Chad more time to run all these tests for only one battery, but having that data is important. Once all the graph data has been collected, we move on to step three.

ProTek has over 10 years' worth of battery graphs in its catalog. However, not all graphs are ProTek, quality batteries from other brands are tested and compared to ProTek packs, and all that data is saved. 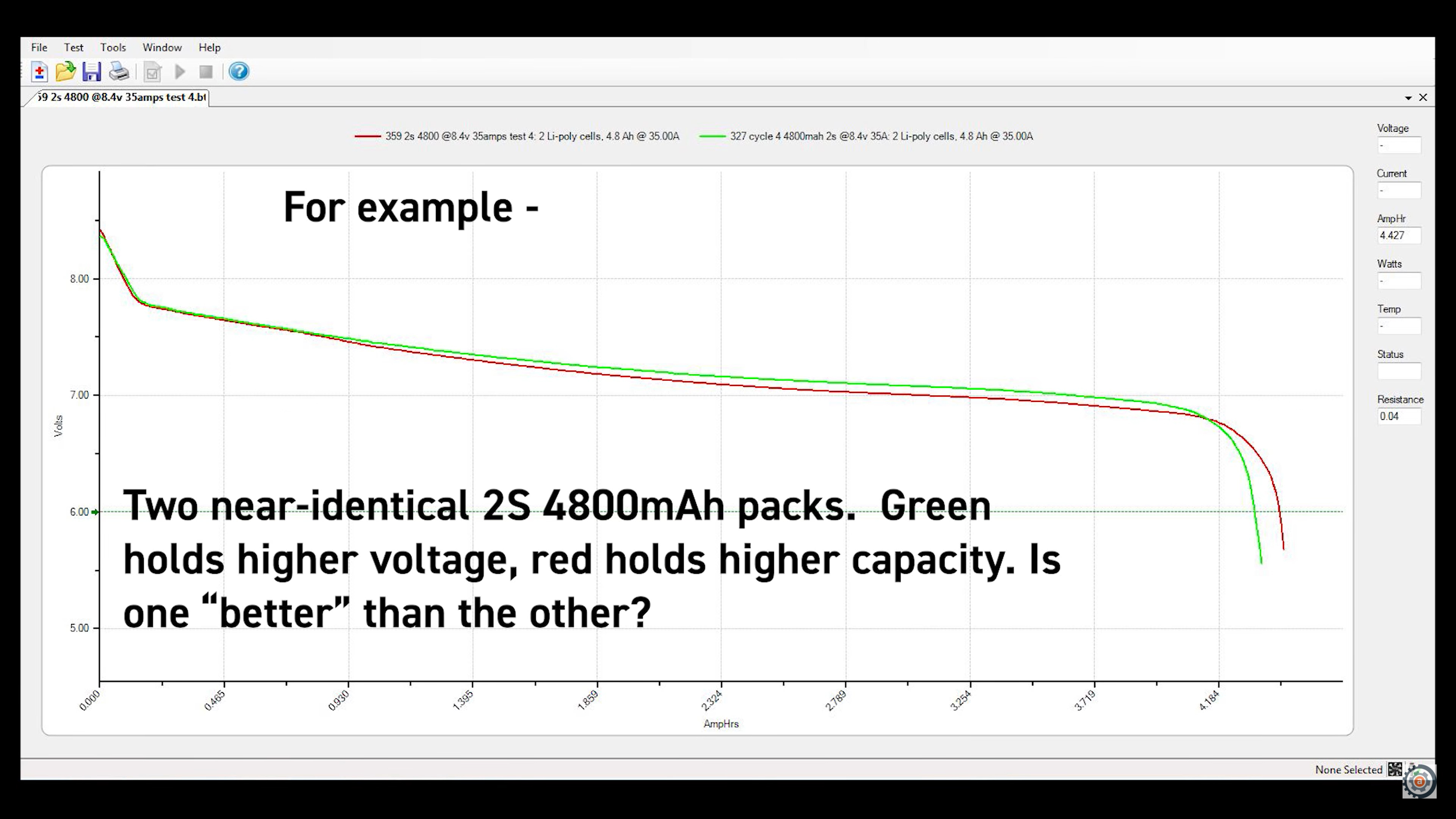 This process overlays the current graph with last year's graph and any other battery graph applicable to this situation. It's a lot of data analysis on Chad's part to compare and hopefully see improvements in capacity, voltage, and internal resistance.

Step three is a critical point in battery testing because the question needs to be asked: "Is this battery worth any more of our time or money?" Unfortunately, most batteries tested never make it beyond this step for many reasons. So we just cut our losses on that product, but we move on if the battery data looks promising.

The next step seems pretty obvious - charge the battery and play, right? But it's a little more involved than that. At this point, ProTek enlists the help of their team drivers to evaluate the battery.

Who better to tell us about his process than team driver and IFMAR World Champion Spencer Rivkin of Team Associated.  Watch our interview with Spencer below.

New batteries tested usually use a different lithium chemistry composition or a different cell configuration, or maybe it's just being offered in a new size. Only with all this testing can it be determined if the new battery is better, more powerful, more durable, and more ideal than what is currently offered.

Most batteries that make it to this point will get the green light to start production, and that production process requires a significant financial deposit and months of waiting.

In the meantime, Chad and the rest of the ProTek team get busy turning sample packs into proper ProTek items by designing new labels for the boxes, including new ratings, new part numbers, and new barcodes. All this is done in-house at the Amain Hobbies corporate headquarters. These design files are saved and sent to our supplier on the other side of the world and implemented into pre-production. 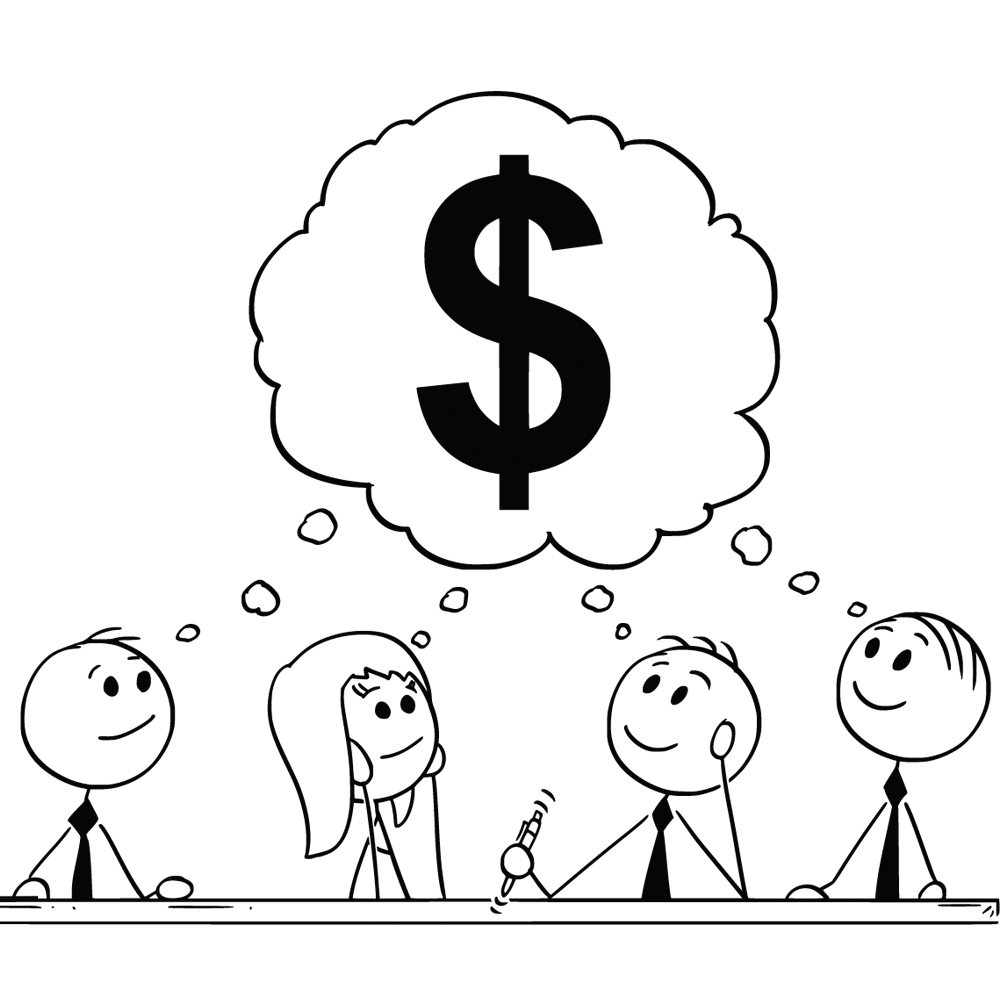 Sample batteries are rushed to ProTek ahead of the initial order so that ProTek can send those batteries to ROAR, BRCA, and EFRA to be approved for sanctioned racing. If it's a year of electric IFMAR worlds, the new batteries are also sent IFMAR for approval. 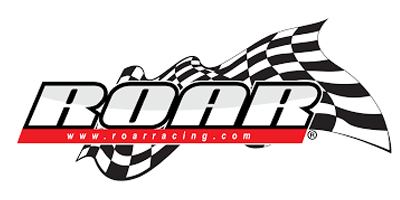 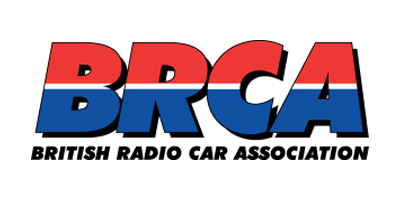 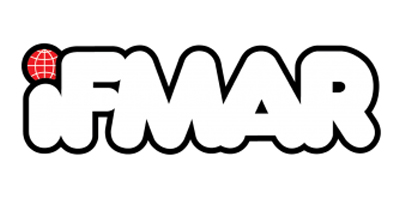 If all of this were timed correctly, the first big order of new batteries would arrive at ProTek RC while the batteries are receiving their approval. So the moment the new battery goes live for sale, it should already be approved. 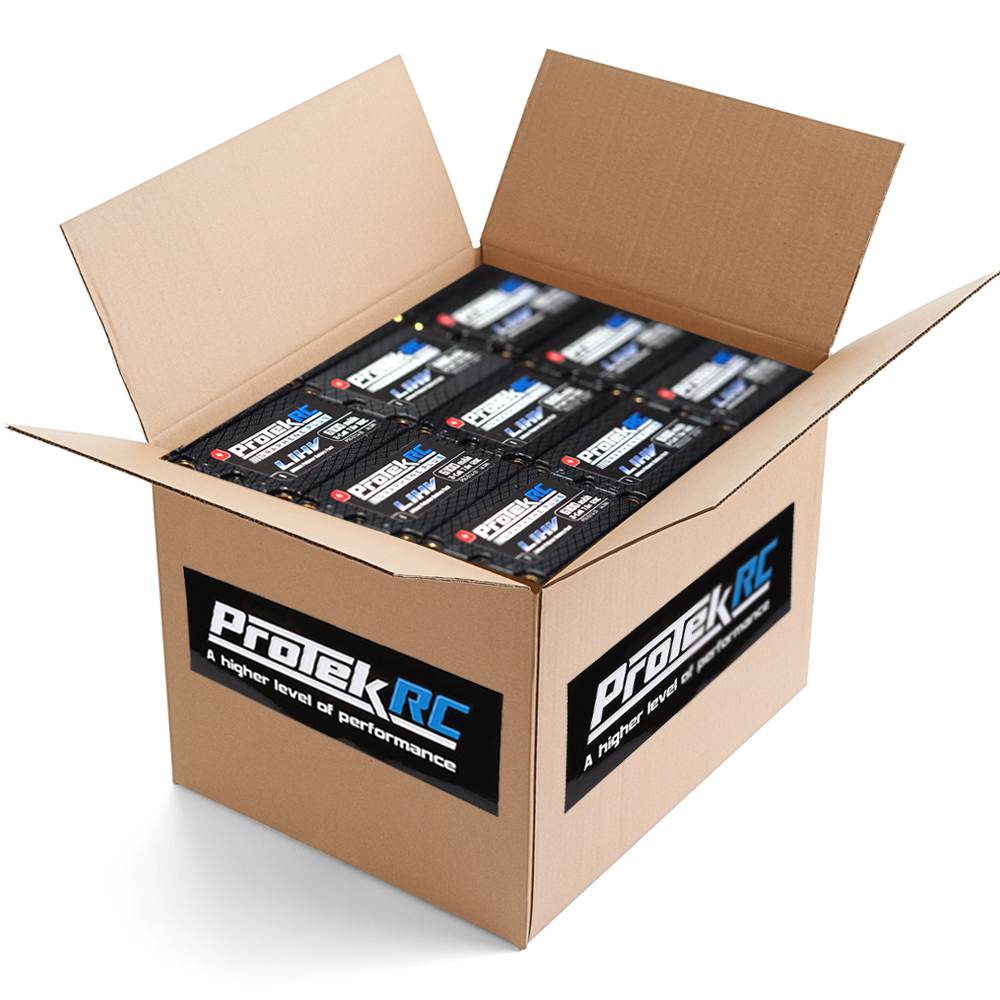 Watch How ProTek RC Tests LiPo Batteries on our YouTube channel, and while you're there, be sure to check out more new product review videos. 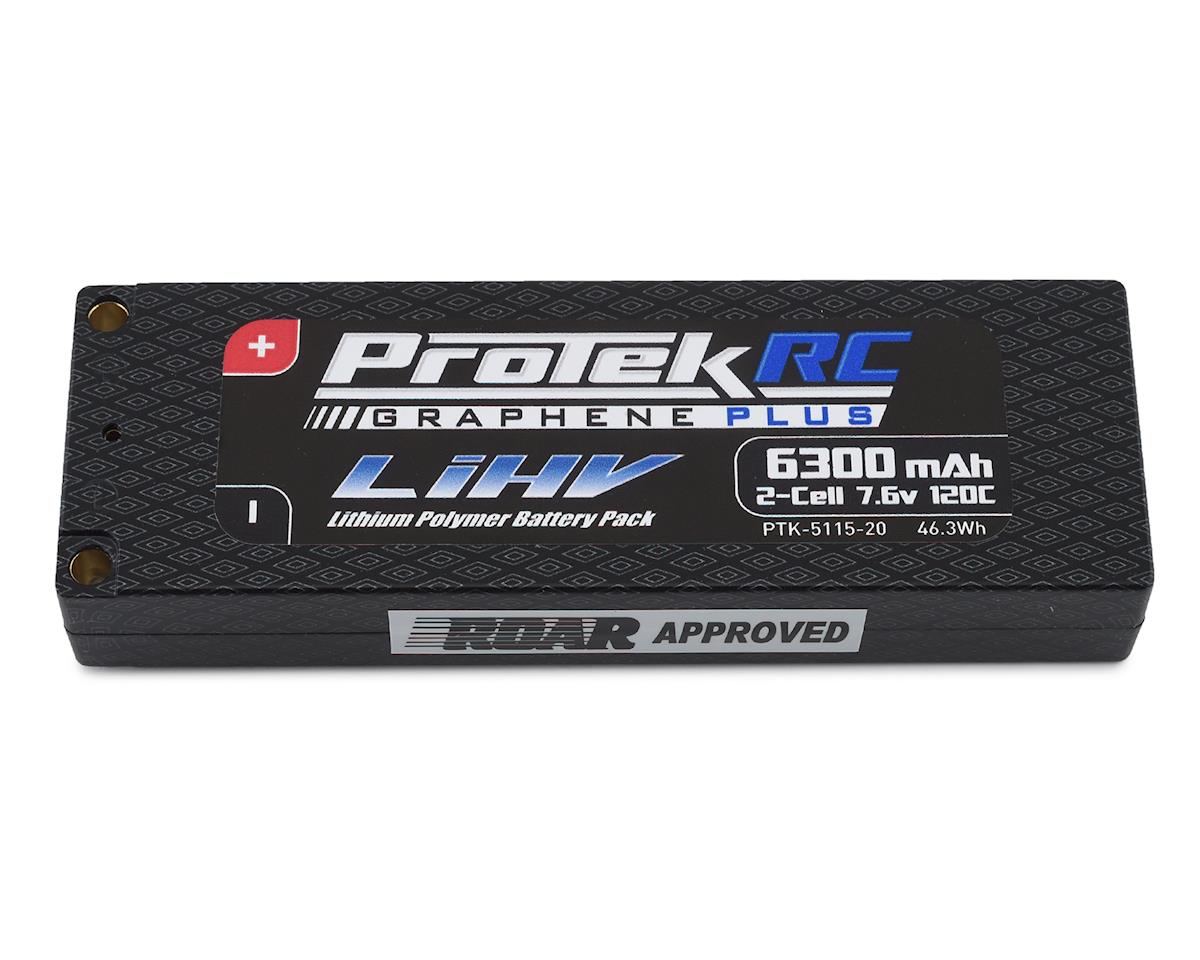 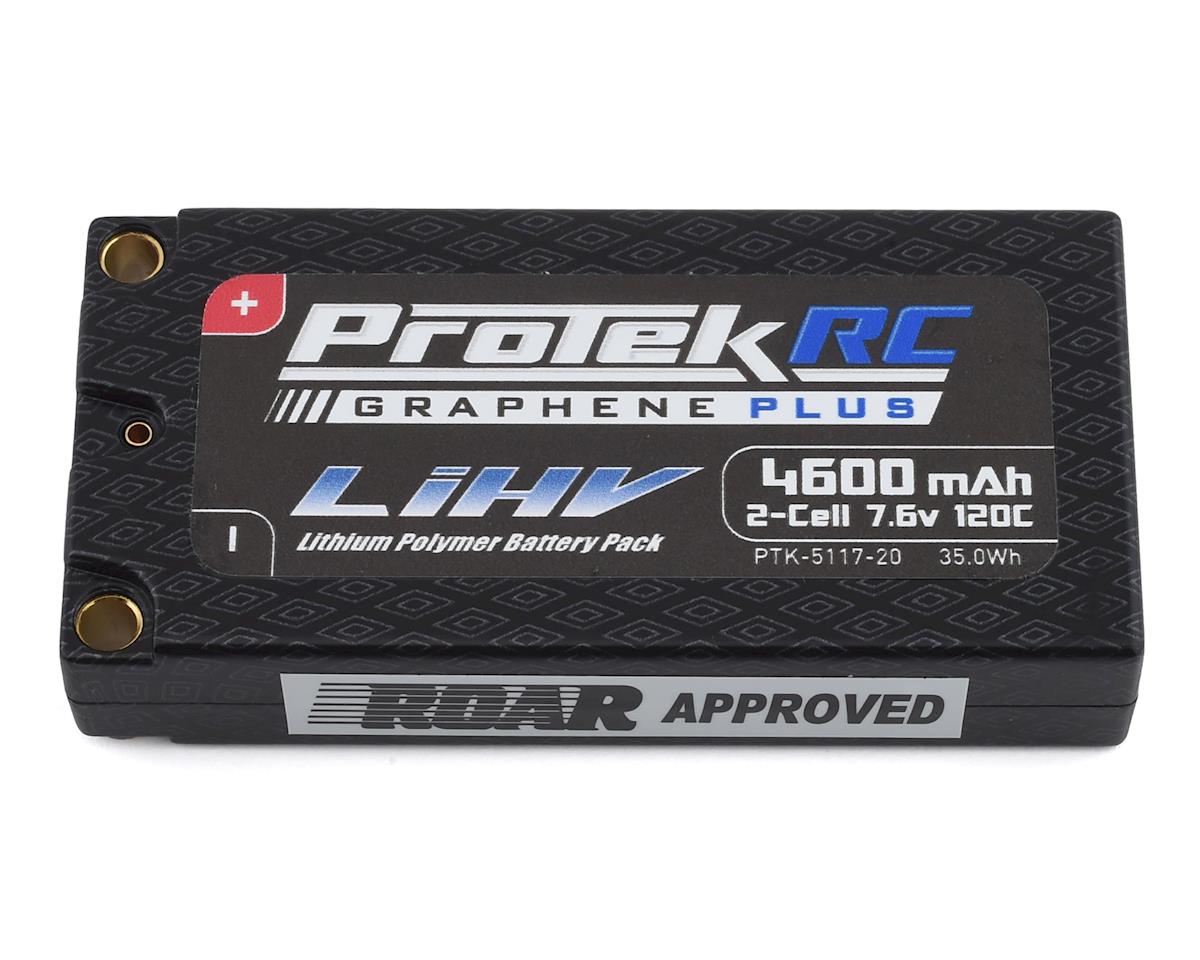 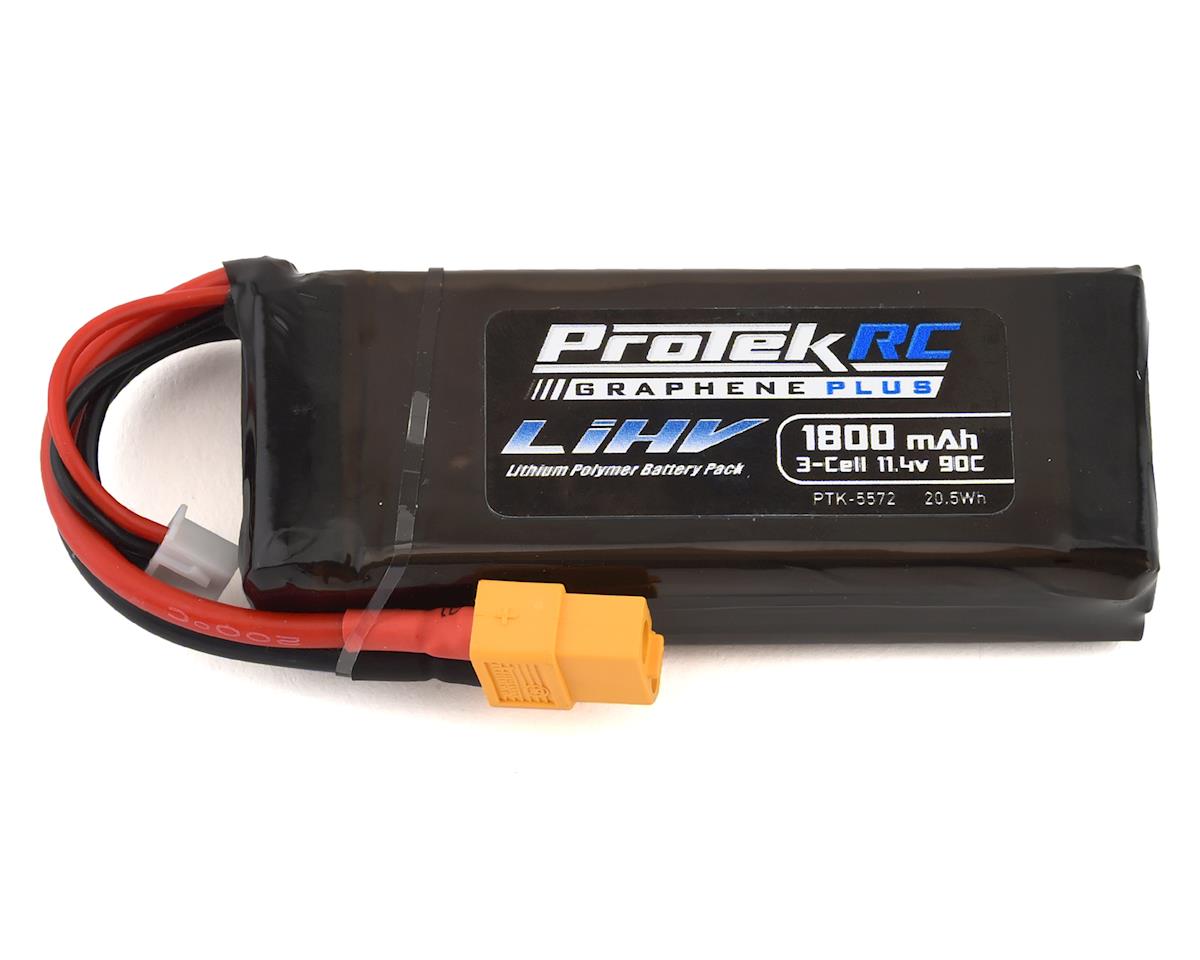 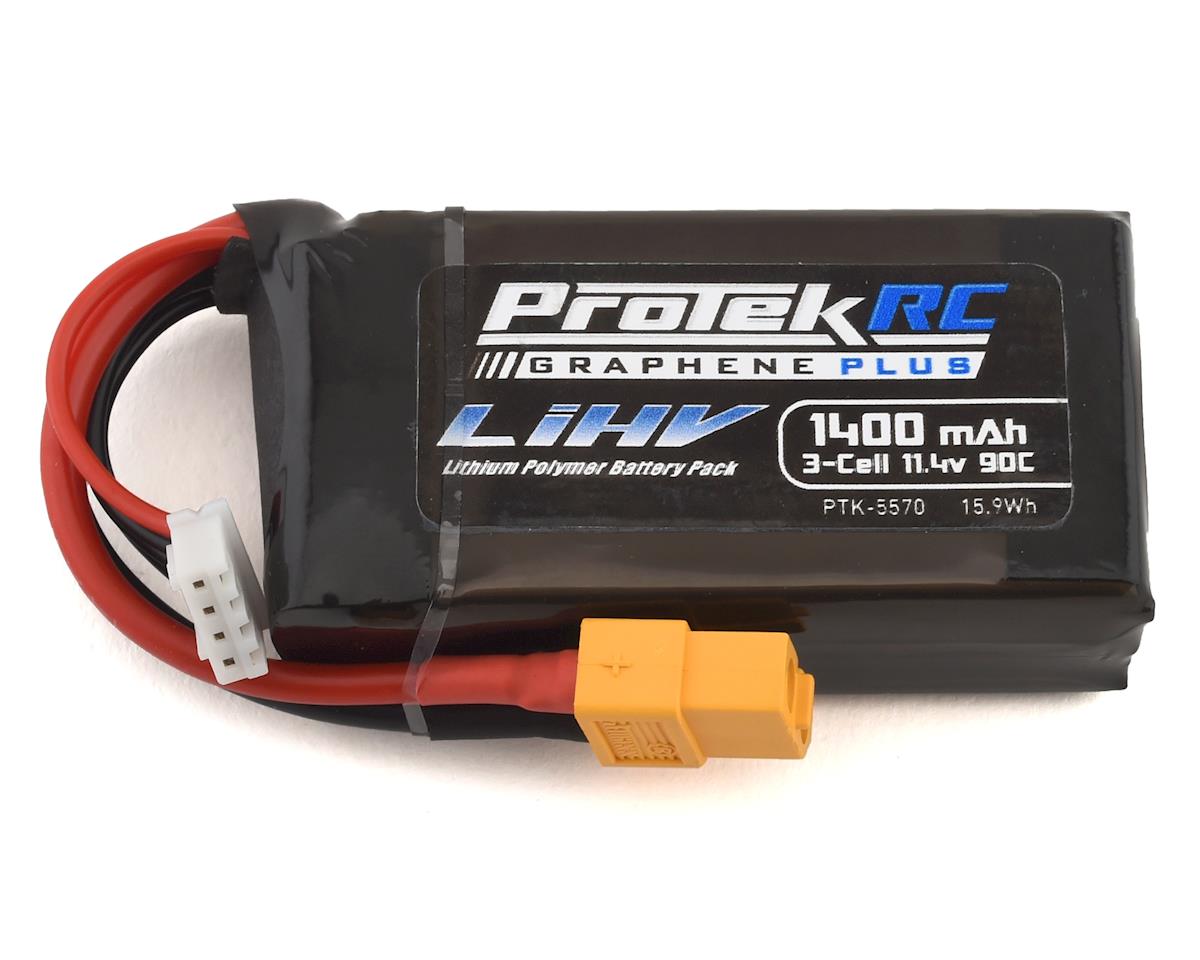