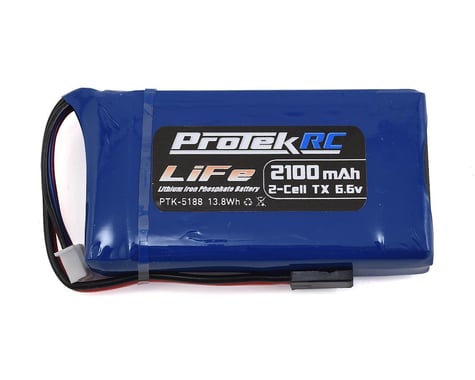 This is the ProTek R/C LiFe Car Transmitter Battery Pack, and is intended for use with the Futaba 3PV, 4PK, 4PM, 4PV, 4PLS, 4PX, 7PX, 16SZ, and 18SZ Transmitters. Lithium battery technology is evolving. With cell dimensions that fit anywhere a standard Li-Po battery will and rapidly increasing capacity, LiFe chemistry will soon set the standard that all others are judged by. With the ability to deliver 1000+ usable cycles, and a life span up to 4 times longer than Li-Poly batteries (when cycled under the same discharge conditions), these batteries offer the user an excellent balance of performance and value. LiFe batteries are more durable than Li-Poly and are able to handle a higher level of abuse when compared to Li-Poly without the risk of pre-mature failure. Unlike Li-Poly, LiFe cells can be stored in a fully charged state with little to no loss in stored power, and can be discharged deeper with less risk of damage to the cells. Most importantly, LiFe batteries are SAFE! There is no risk of combustion! LiFe cells will not catch fire or explode when over charged, or after a deep discharge.

What about the voltage?
A 2 Cell LiFe battery produces 6.6 volts nominal, which is almost a full volt less than a 2 Cell LiPo battery. The LiFe battery is not meant to replace the performance of a Li-Po battery, it is simply another option. LiFe offers the user a battery with a good discharge curve that is better than that of a NiMH battery, but without the risk of damage or fire that exists when a LiPo battery is abused.

IMPORTANT:
1) You will need a LiFe specific charger to charge the pack (NiMH, NiCD or Li-Poly only chargers WILL NOT WORK!)
2) You must not discharge the LiFe battery pack below 33% capacity during the break in period or below 2.5V per cell after break in.
3) It is not recommended that you charge this LiFe battery pack at amp rates higher than  1C.
4) Read the instructions carefully before operating this battery.

Robert D
Verified Owner
ProTek RC LiFe Futaba Transmitter Battery Pack (6.6V/2100mAh)
Got one for my futaba 4px has worked great so far have used it for 6 hours straight and hasn't moved between 6.5 and 6.4 im new to this type of battery and almost sent it back. After i charged it to 7.2v i unplugged it and voltage dropped to 7.1 then 7.0v i put it in my radio set the battery option for the life battery in my radio. And noticed the voltage kept dropping. I looked around on the net didn't notice much info about this. The voltage dropped down to 6.5v after about 5 minutes. I contacted amain tech and was told this is normal and it will take along time before it drops Again and it was doing what its supposed to do stabilize around the 6.6v level and that 6.5 to 6.4 is normal. its just the chemistry of the Life battery. So far im very happy have got alot of hours on the radio over 5 hours of just goofing in options along with 6 hours of run time running my car and its still at 6.5 to 6.4v great battery Im happy with my purchase.
14 customers found this review helpful.
Mark Stewart
ProTek RC LiFe Futaba Transmitter Battery Pack (6.6V/2100mAh)
If you are looking for a good battery for your 4pk then look no further! For a weekend racer like me you might only have to charge this thing 1 or 2 times a season. I put almost 10 hours on my transmitter before charging it and only put 850mah back in. Great battery and great price!
8 customers found this review helpful.
Tom
Verified Owner
ProTek RC LiFe Futaba Transmitter Battery Pack (6.6V/2100mAh)
This battery has worked great for me. It lasts a very long time in my Futaba 4PX. I also want to note that this fits inside a Futaba 3PV as well.
3 customers found this review helpful.
Jake
Verified Owner
ProTek RC LiFe Futaba Transmitter Battery Pack (6.6V/2100mAh)
I a using it in my radiopost ts401 since there bigbang life is no longer being made. It fits perfectly, same size as stock battery. Just make sure to change low voltage cutoff
3 customers found this review helpful.
Pete DeVries
Verified Owner
ProTek RC LiFe Futaba Transmitter Battery Pack (6.6V/2100mAh)
Ordered one up with my 7px and it's perfect. Better than expected... seems to last longer with every charge. So much better than using AA batteries..