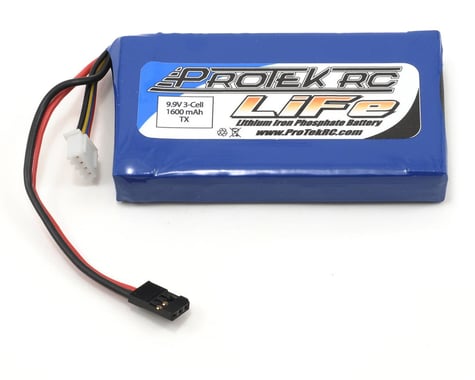 This is the ProTek R/C LiFe Transmitter Battery Pack and is intended for use with the Futaba 3PK and Airtronics M11 Transmitter. Lithium battery technology is evolving. With cell dimensions that fit anywhere a standard Li-Poly battery will and rapidly increasing capacity, LiFe chemistry will soon set the standard that all others are judged by. With the ability to deliver 1000+ usable cycles, and a life span up to 4 times longer than Li-Poly batteries (when cycled under the same discharge conditions), these batteries offer the user an excellent balance of performance and value. LiFe batteries are more durable than Li-Poly and are able to handle a higher level of abuse when compared to Li-Poly without the risk of pre-mature failure. Unlike Li-Poly, LiFe cells can be stored in a fully charged state with little to no loss in stored power, and can be discharged deeper with less risk of damage to the cells. Most importantly, LiFe batteries are SAFE! There is no risk of combustion! LiFe cells will not catch fire or explode when over charged, or after a deep discharge.

Egon
Verified Owner
ProTek RC LiFe 3PK/M11 Car Transmitter Battery Pack (9.9V/1600mAh)
My first review was written shortly after buying this pack (August 30, 2010), and now its almost one and a half year later and this pack still works like new. I even got a few more for other people. They are happy and still made no complaints.
1 customer found this review helpful.
View all reviews (1)
Related Products
Customers also purchased...