No Prep RC Drag Racing with the Team Associated DR10

The “no prep” (as in “no track preparation”) RC drag racing scene is red hot, and Team Associated makes it easy to get into RC drag competition with the rugged and popular DR10. It’s based on the proven SC10 platform and available as a ready-to-run (RTR) model that arrives fully assembled and painted complete with all the required electronics, or as the unassembled Team Kit which leaves the choice of radio gear, power system, body, tires, and battery to you. In this article, we’ll take a look at what you’ll need to get started in organized drag racing with the DR10 in both RTR and Team Kit versions, examine the pros and cons of each choice, and compare just how much you’ll need to spend to put a race-ready machine on the starting line. Let’s get into it!

Out of the box, the DR10 RTR is well equipped for all-around RC street driving and casual racing and can be upgraded for serious drag racing competition. The LiPo Combo version includes a battery and charger.

The DR10 is available with a Reedy 2S 3300mAh LiPo battery and balance charger as the DR10 RTR LiPo Combo. If you’ve already got a suitable battery and charger for the DR10 (or you prefer to choose something other than what is supplied with the Combo car), you can save $70 and get the DR10 RTR minus those items. The DR10 Team Kit seems like a big money saver at about half the price of the RTRs, but as the chart shows, there are quite a few components you’ll need to add before you can drive it. The DR10 Team Kit can indeed save you money when the objective is to build a drag car equipped for serious competition, but if you’re just out for fun-running action with drag-racing style, a DR10 RTR will get you out on the pavement more quickly and affordably. 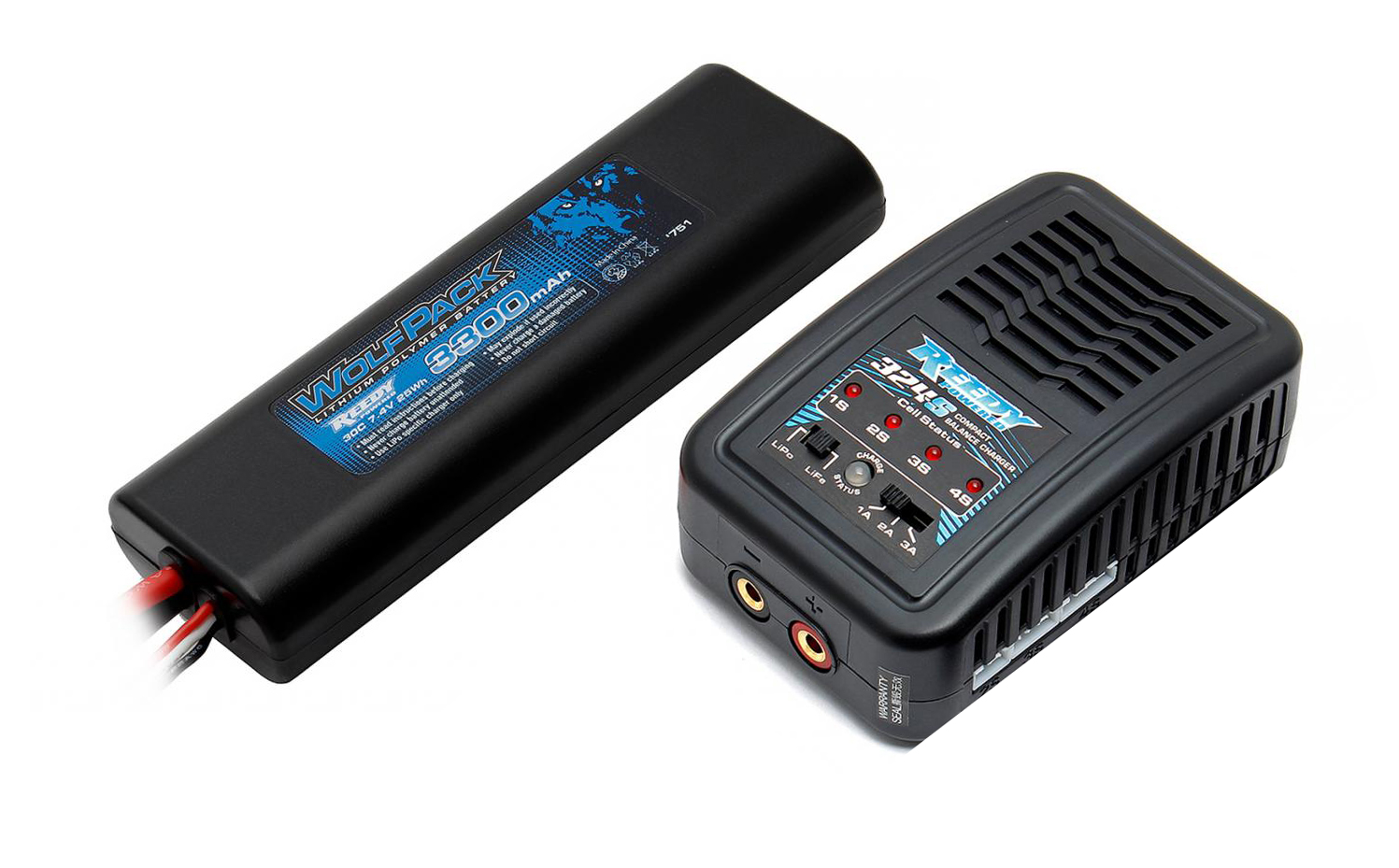 Building a Competition DR10 from an RTR

It seems logical that a DR10 RTR would be the most economical way to build a comp-ready car since you don’t need to buy all the equipment needed to make it run. And for sure, you can absolutely go out and race a DR10 RTR with nothing more than a receiver swap (more on that shortly). However, the gearing, suspension settings, and equipment choices of the RTR models are best suited to knockaround fun-running with a 3S LiPo battery, not the specialized performance required for drag racing with a 2S LiPo battery (as is standard for competition). If you want to prep your DR10 RTR for serious drag racing wins, consider making these upgrades:

We added these components to make our DR10 race-ready.

• Aluminum servo arm to replace the stock servo-saver. The servo saver protects the servo gears in a crash, but at the expense of steering precision. A rigid aluminum servo arm eliminates steering play for much improved steering response and feel. $14

• Race-ready gearing. The DR10 RTR is geared for 3S driving, not the 2S batteries used in racing. An 81-tooth spur gear and 24-27 tooth pinion will get the DR10 off the line and down the strip with competitive performance. $13

• Race-legal receiver. The DR10 RTR’s receiver is equipped with a gyro that makes the car easier to drive by automatically counter steering if the rear end starts to fishtail. It’s a great feature for fun driving, but gyros aren’t allowed in competition. The fix is easy: swap the stock receiver for Team Associated’s XP-R4, which is compatible with the DR10’s transmitter and does not have a gyro. $20

The additional items have added $108 to our DR10 RTR’s price tag, but it is now well equipped to win and meets the rules for competition. Let’s take a look at how that $108 shakes out with the Combo RTR and its included battery and charger versus the standard DR10 RTR without them:

A more competitive (but more expensive) racing solution for drivers who don’t already own suitable gear would be purchasing the non-combo car and then buying a drag-specific battery and a more powerful charger. The ProTek RC Prodigy 610EZ Charger and ProTek RC Drag Race 2S 120C Si-Graphene+ Battery are good choices and will add about $165 to your drag racing budget. 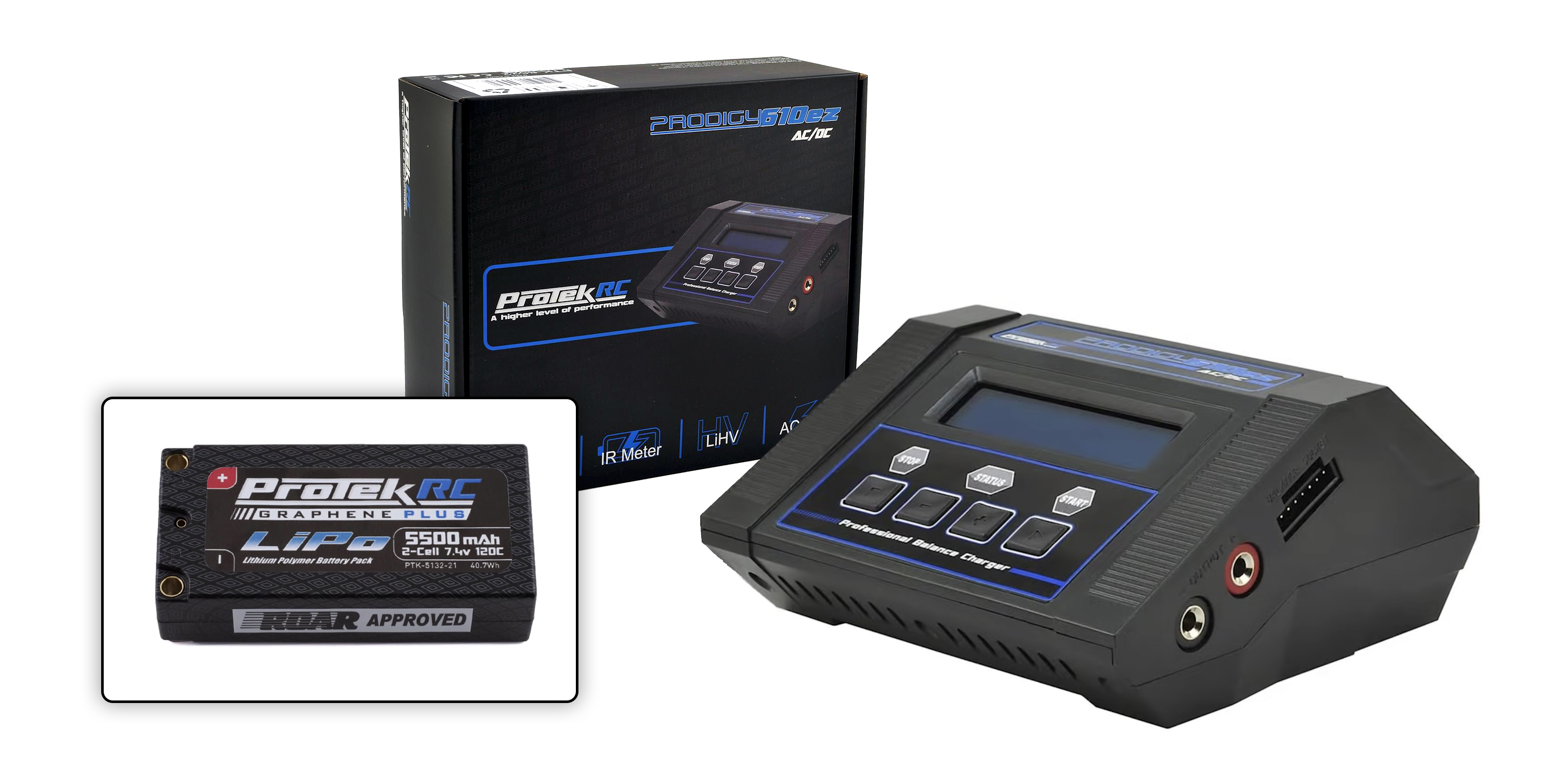 As this chart shows, the non-combo setup with the addition of a competition-grade ProTek battery and charger is more expensive, but this setup will outperform the combo-supplied Reedy equipment and can be used with other models down the road. If you add the ProTek battery and charger to the DR10 Combo later, the total price jumps from $507 to $670, which means you would have saved $60 by starting with the non-combo RTR.

Do I Need to Upgrade My Transmitter?

The DR10 RTR’s included transmitter is perfectly fine for drag racing. There’s no need to add the extra expense of an aftermarket radio system to your comp-car build list if you’re trying to keep your costs down. That said, the extra features and premium feel of a well-featured radio system such as the Futaba 3PV and Sanwa MX-6 pistols shown here will give you more tuning options to hone driving feel and responsiveness, and won’t break the bank with their under-$150 price tags. An upgraded radio is nice to have, but not a need to have. 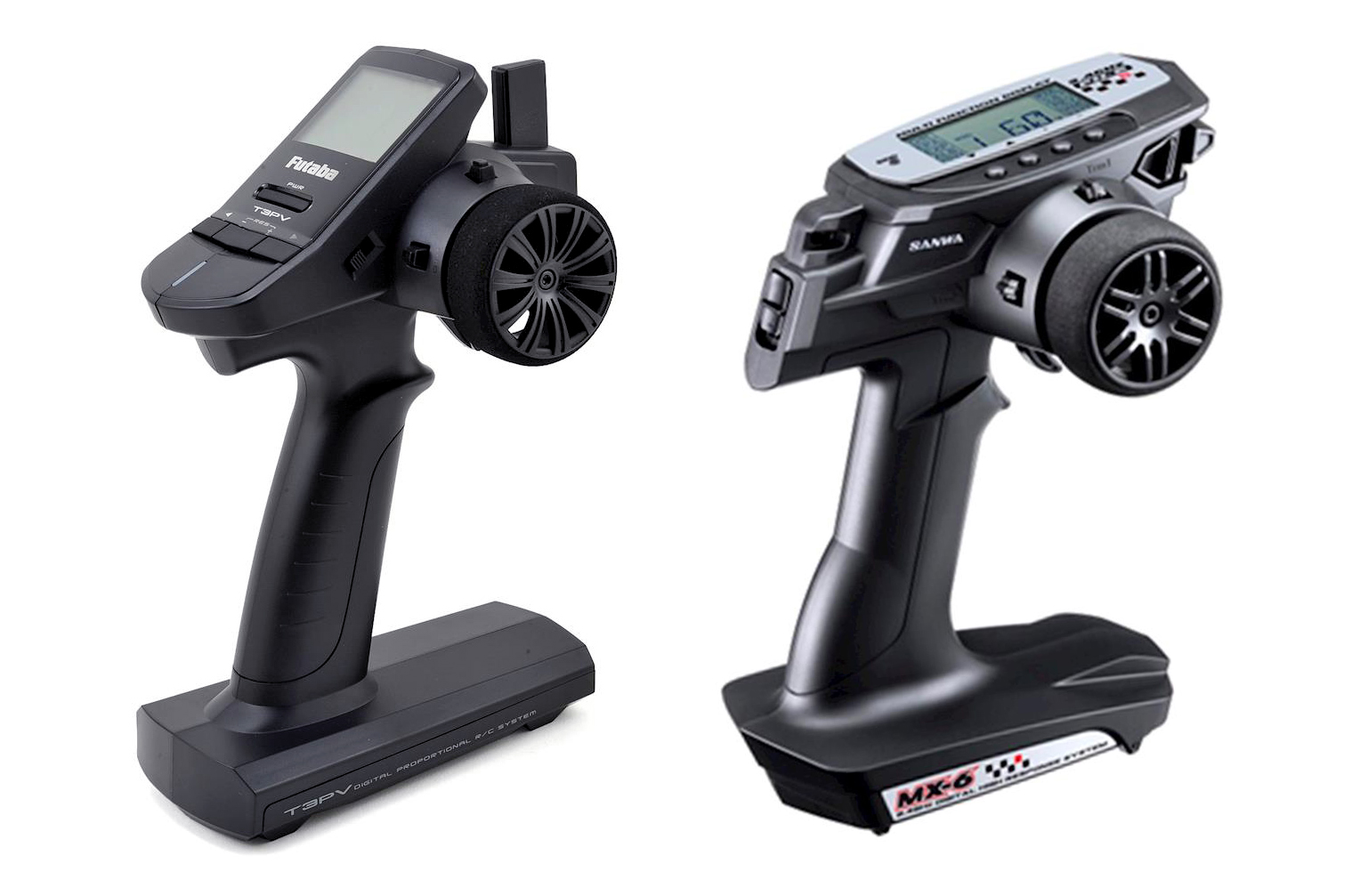 Going All the Way: Building Up the DR10 Team Kit

The DR10 Team Kit will only set you back $200, but remember, you’ve got to add a body, tires, power system, radio system, steering servo and battery to the mix. You do get wheels, so your new tires will have a home. And unlike the DR10 RTRs, the Team Kit includes 500,000 cst diff fluid, so there’s no need to buy thicker diff fluid. The Team Kit’s gearing is also good to go, and you even get a rear sway bar—that’s a very useful tuning aid. 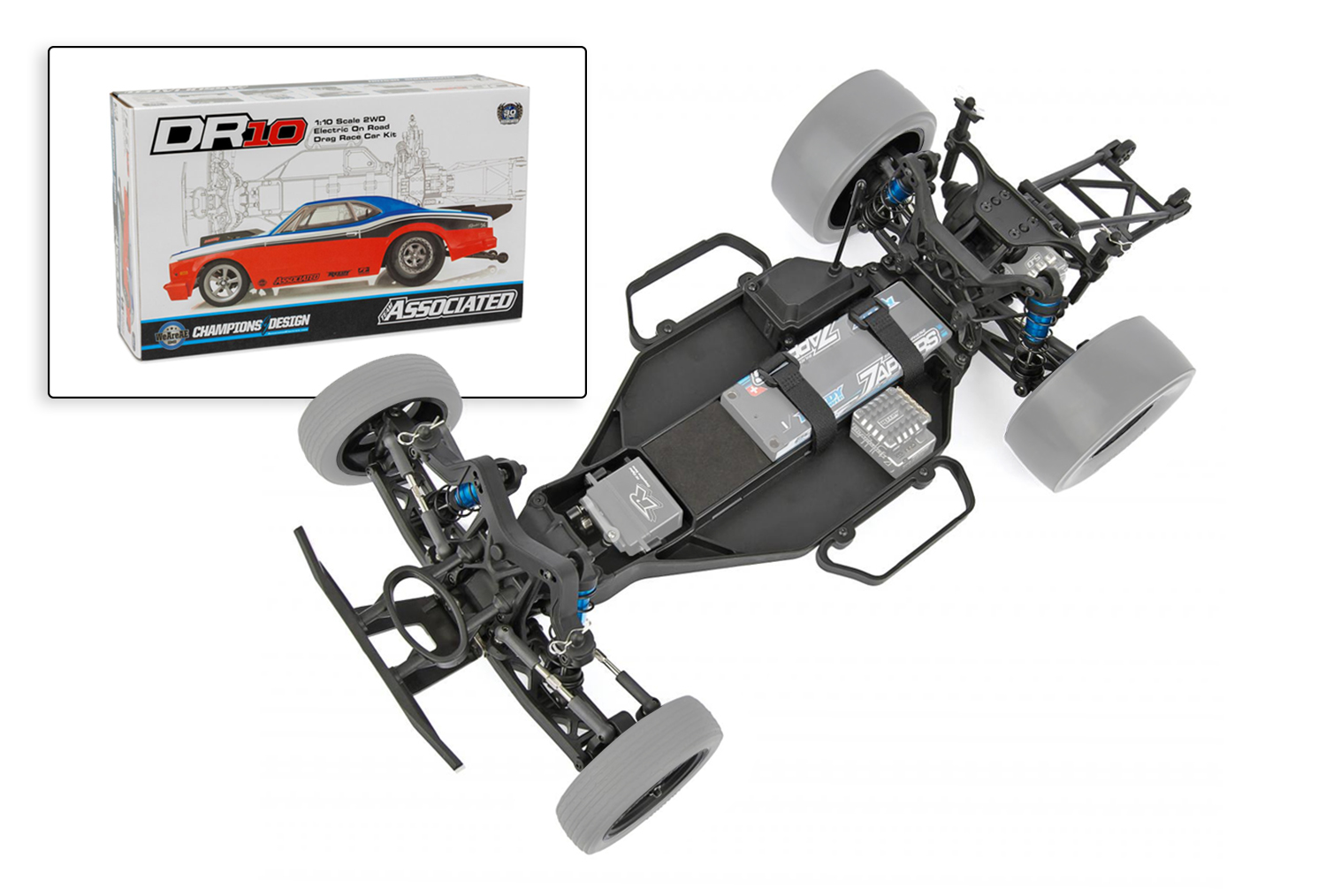 Most new drag racers have at least a few of the required components to complete the DR10 kit already in their RC arsenal, but we’ll run the numbers starting from scratch. There’s a million ways to go with your personal build, and you can spend more or less than we are to outfit your DR10. Here’s what we’re going with:

• Transmitter and receiver: the Futaba 3PV radio system is a high-quality, affordable choice at $140

Putting your current racing gear to work in your DR10 drag car will take a big chunk of change out of your getting-started cost.

Starting from zero, our total bill for a race prepped DR10 Team Kit comes in right under a grand at $995. Most new drag racers coming to straight-line competition from other types of racing can whack over $300 off that price tag by using the race-worthy gear servo, radio system, power system, and batteries they’ve already got. 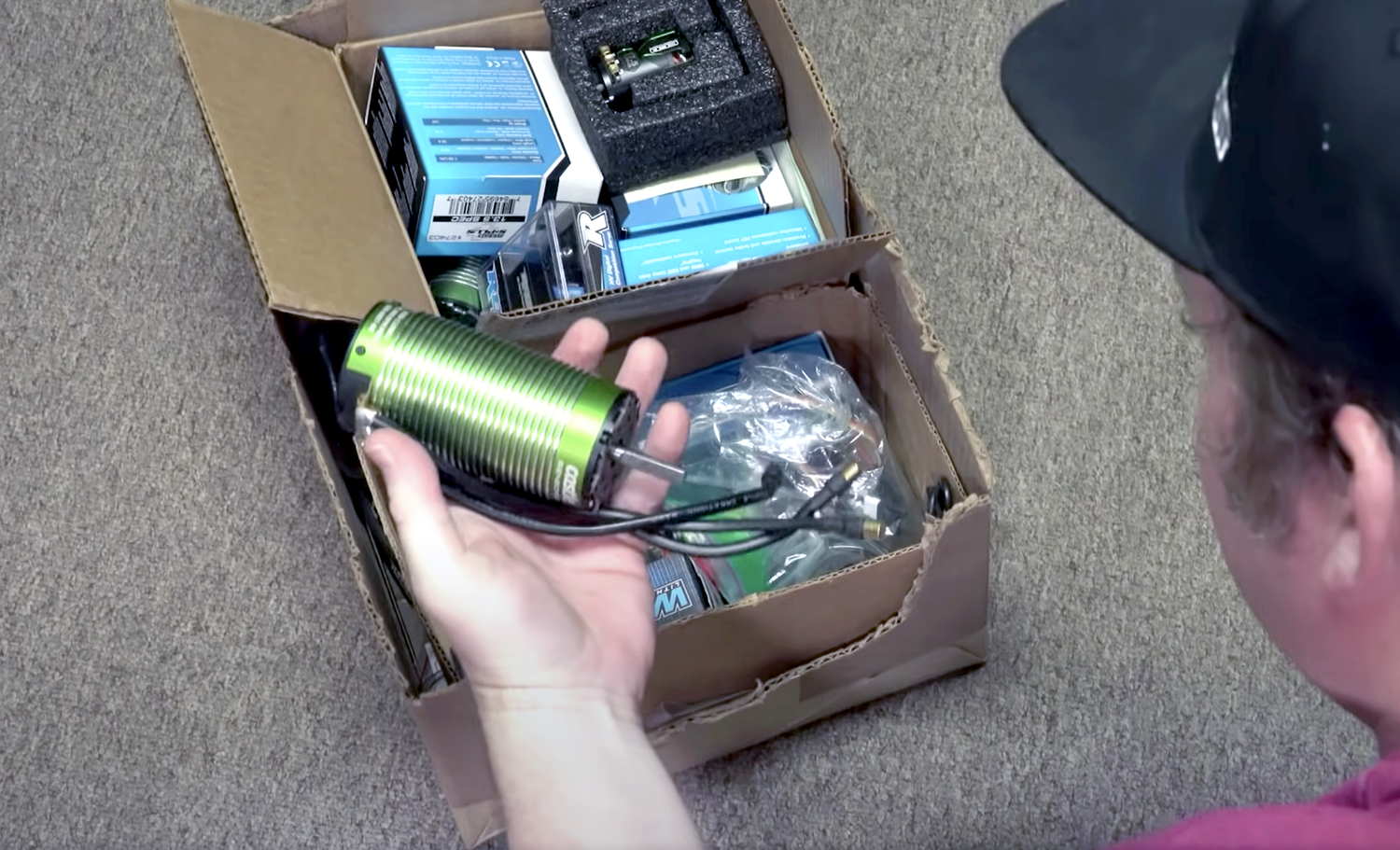 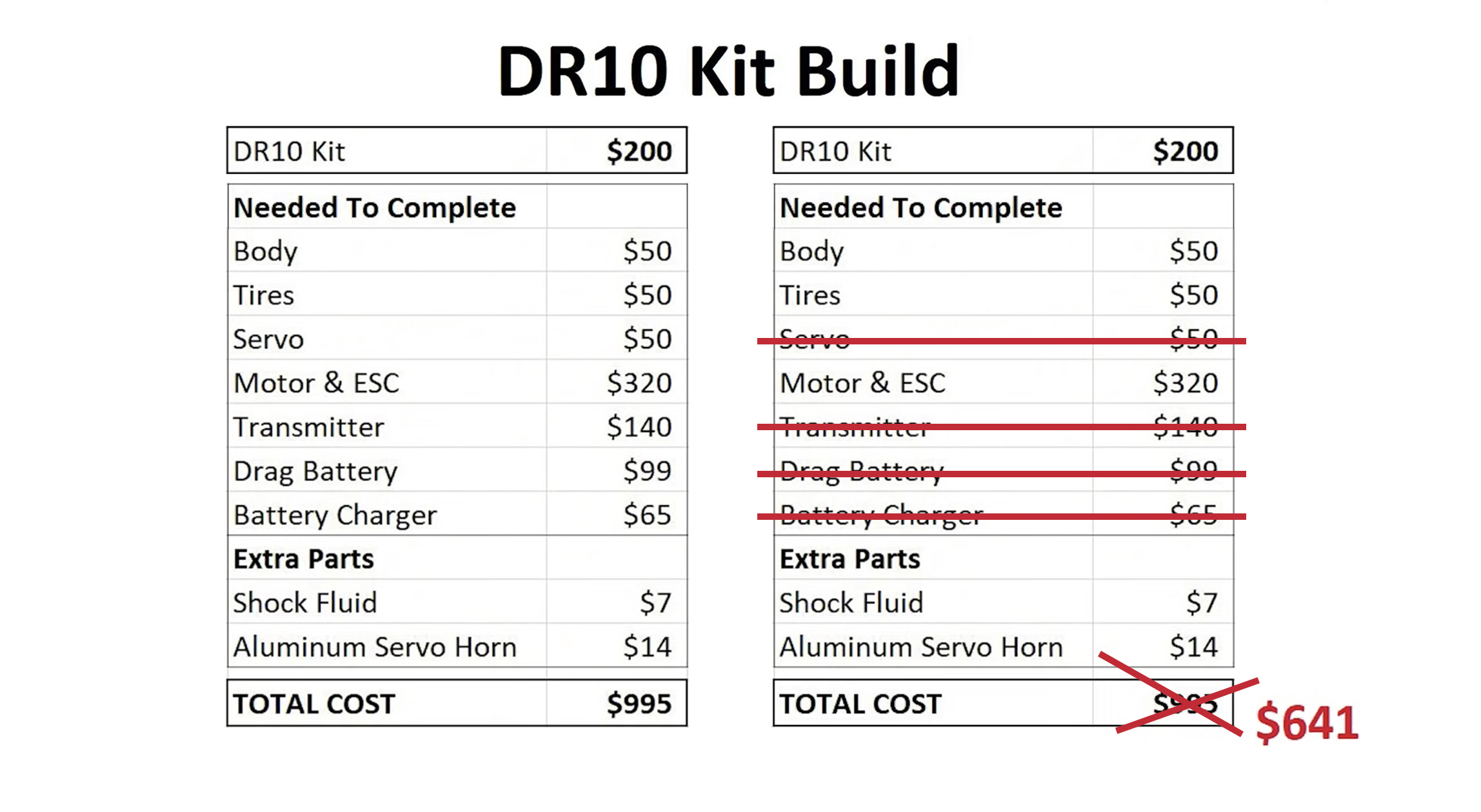 As we’re sure you’ll agree, there’s plenty of flexibility in how to get into drag racing with a Team Associated DR10. Let’s boil it down to the essentials:

• The DR10 RTR LiPo Combo is the most expensive initial purchase, but ends up being the least expensive overall build. If the goal is to get onto the track as affordably as possible, this is the way to go. And you can always make upgrades down the line, which is what most racers do.

• The DR10 RTR without an included battery and charger will cost you more to get rolling when you add the cost of those items, but it gives you the advantage of choosing a competition-grade battery and a full-featured charger. It’s a little more money up front, but it’s cheaper than getting the Combo car and adding a better battery and charger later—and you’ll enjoy higher performance.

• The DR10 Team Kit seems like a steal at just $200, but it requires the most items to complete and ends up being the most expensive build. However, our component selections make it the best-prepared race car, and it will outperform the RTR builds. And here’s another way to look at that $995 price tag: if you upgrade a DR10 RTR to match all the equipment of our Team Kit build, you’ll be up around $1200 instead of the $995 you’d spend on the kit car. If you know you’re going to go all out, you’ll spend less if you save a little longer and get a Team Kit and equip it with premium-spec stuff from the start. 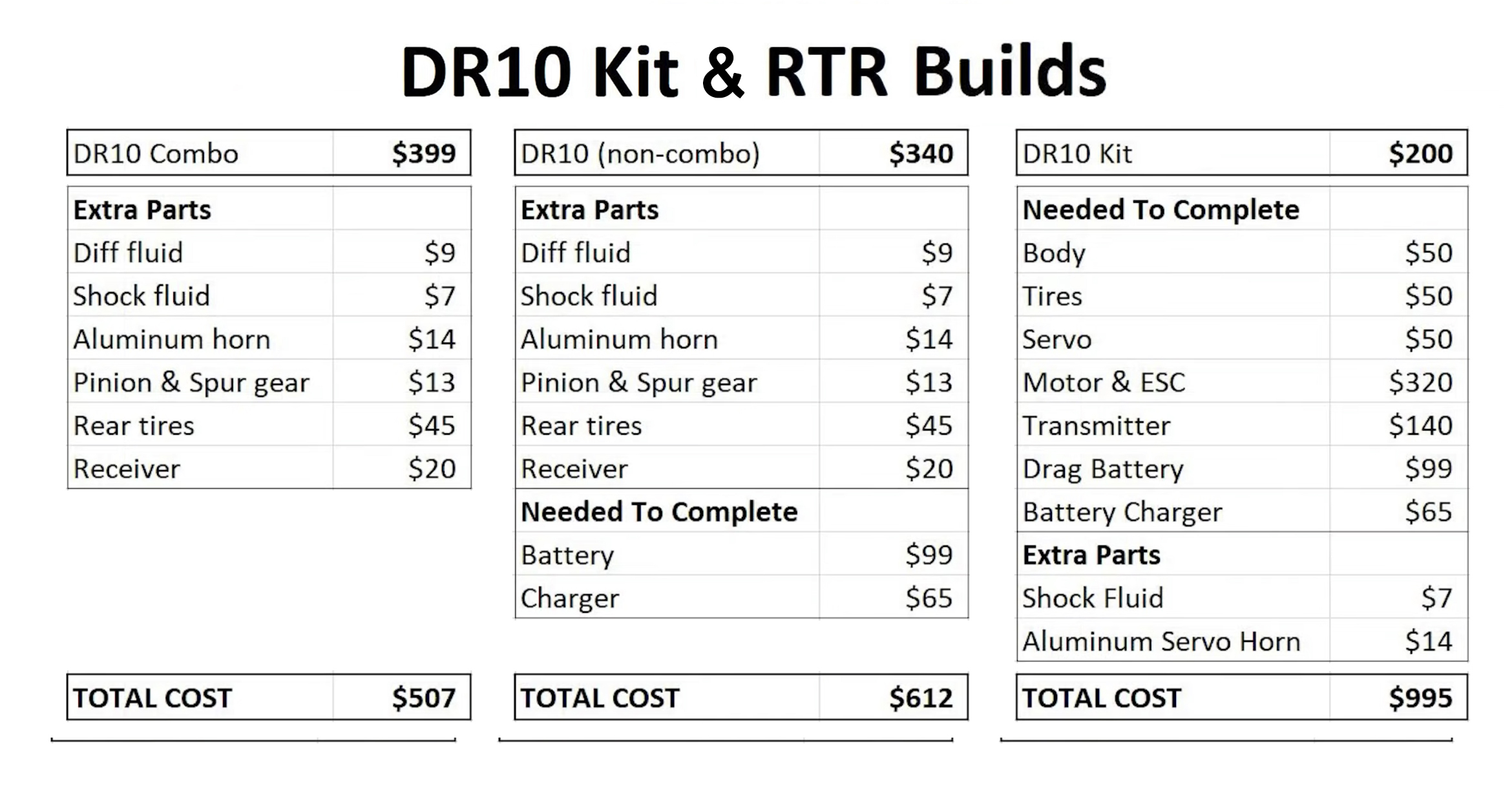 Though not the least expensive way to go, a competition-prepped DR10 Team Kit is the most cost-effective way to build a race-winning drag machine.

There’s a healthy drag racing scene among the gang here at AMain, and the DR10 is a popular choice. Let’s take a look at a few of the machines you’ll see tearing up the parking lot at HQ:

This DR10 belongs to our man Jonah. He started with the Team Kit and has upgraded it steadily since building it up stock. The threaded-body rear shocks are a smart addition, as they allow precise ride height and preload settings for straight, stable launches off the line. 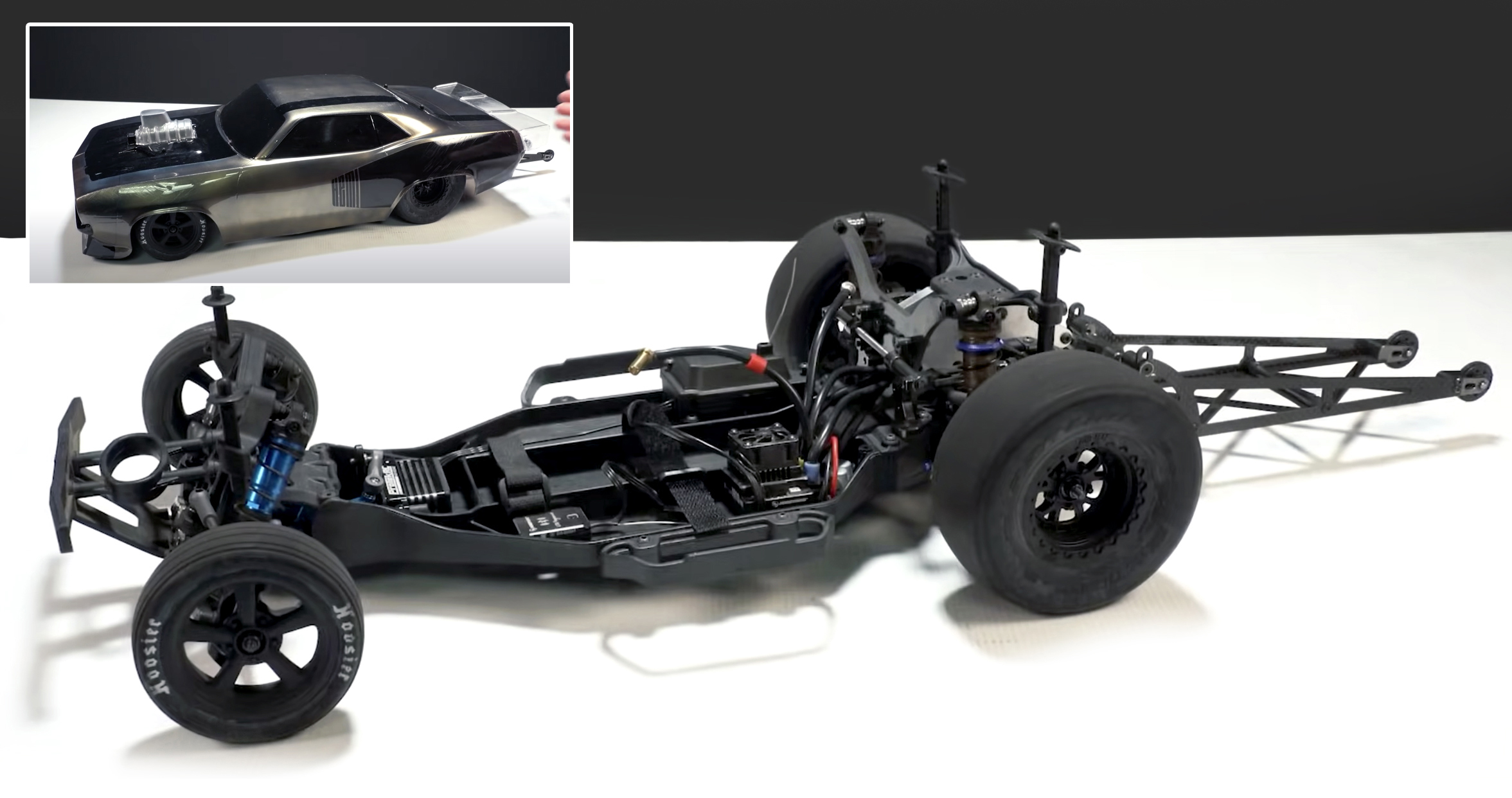 This is the AMain project DR10. You wouldn't know it by looking at it, but it's an RTR that we upgraded to this level. The DR10 Team Kit and the RTR car are identical with the exception of the kit’s 500,000 cst diff fluid and included sway bar. So even though we started with a RTR, you could definitely call this a Team car. 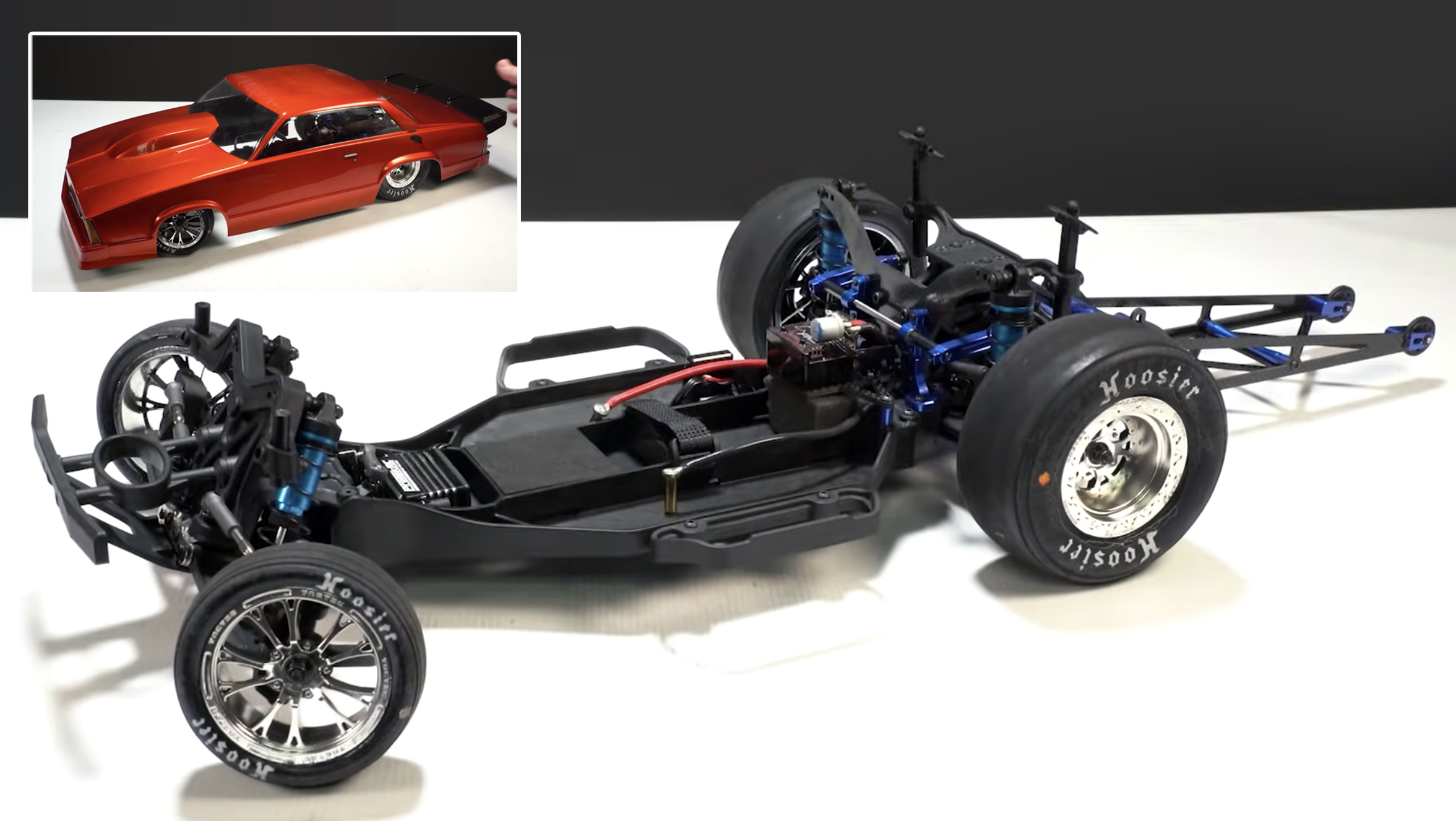 This bad boy belongs to James. He began with a Team Kit, then added the DragRace Concepts DR10 Drag Pak Pro Spec chassis. The DragRace kit replaces the DR10’s molded chassis with a super-stiff full carbon-fiber and machined aluminum setup. James then added more aluminum and carbon accessories, including machined alloy wheels. James’ ride is an excellent example of an extreme build that anyone can make using a DR10 RTR and the vast array of factory and aftermarket upgrades and accessories offered for Team Associated’s very popular drag machine. 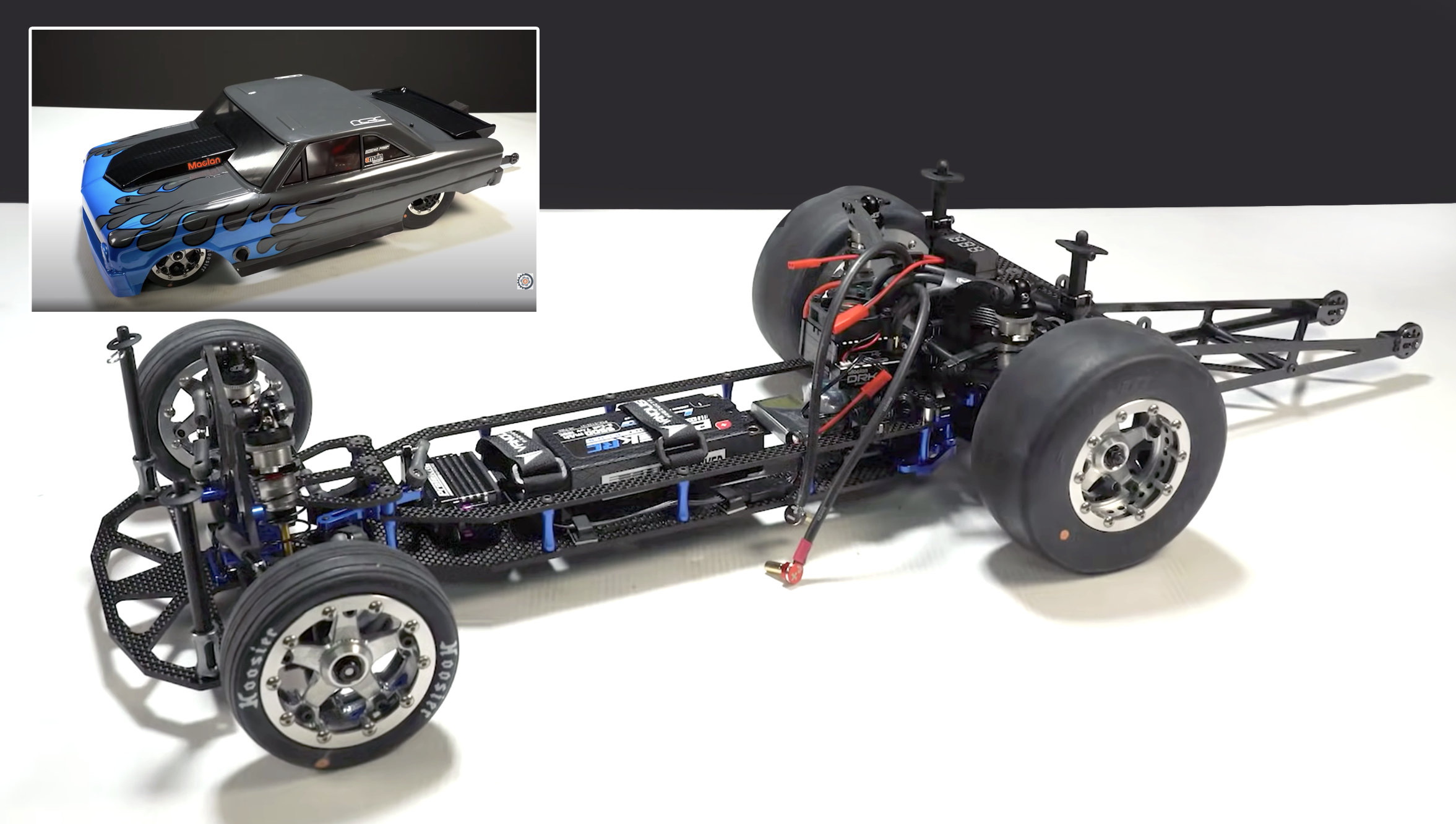 Watch "How to Get Started in R/C Drag Racing with the DR10" on our YouTube channel, and while you're there, be sure to check out more new product review videos.