Disclaimer: The Monster Slash concept has been around for many years, with conversions varying depending on the builder. With that, there is no "right" way to create a Monster Slash. This is our inspired attempt at creating a Monster Slash, AMain Hobbies style.

Replace The Wheels & Tires This step is pretty easy and self-explanatory. Simply remove all four M4 nuts that are holding on the wheels with a 7mm nut driver. Remove the stock tires/wheels and put on the new 2.8″ Trenchers. Wheel Offset Note: Pro-Line offers their pre-mounted Trenchers 2.8″ Tires on various wheel offsets; “Nitro Rear” or “Electric Rear.” We originally mounting the “Electric Rear” wheel offset on the front of our Slash, however, when turning left or right, the wheel rubs on the suspension arm and locks up. The “Nitro Rear” wheel however is perfect for the front of the Slash 2WD; it offers a deeper offset with proper clearance and no rubbing. For the rear, “Electric Rear” wheels work fine but cause the rear width to be more narrow than the front. For a wider stance (and a more balanced front/rear width), also use the “Nitro Rear” wheels on the rear.

Now that we have our large 2.8″ tires, we need to lift the body for more tire clearance. Remove the Pro-Line Extended Body Mount Set and start assembling them. Don’t worry on setting the height correctly, we’ll adjust that last once the mounts are installed. You will need a 2mm hex driver.

To mount the front, gently pull the front shock tower towards the front of the vehicle, slightly flexing the plastic enough to get your 2mm hex driver in there. Remove the two screws holding the stock mount, and reinstall the Pro-Line mount using the same two screws, in the same two locations.

To mount the rear, remove the four screws used to secure the stock mount to the rear shock tower. Now use those same four screws and install the Pro-Line Extended Body Mount in the same location. 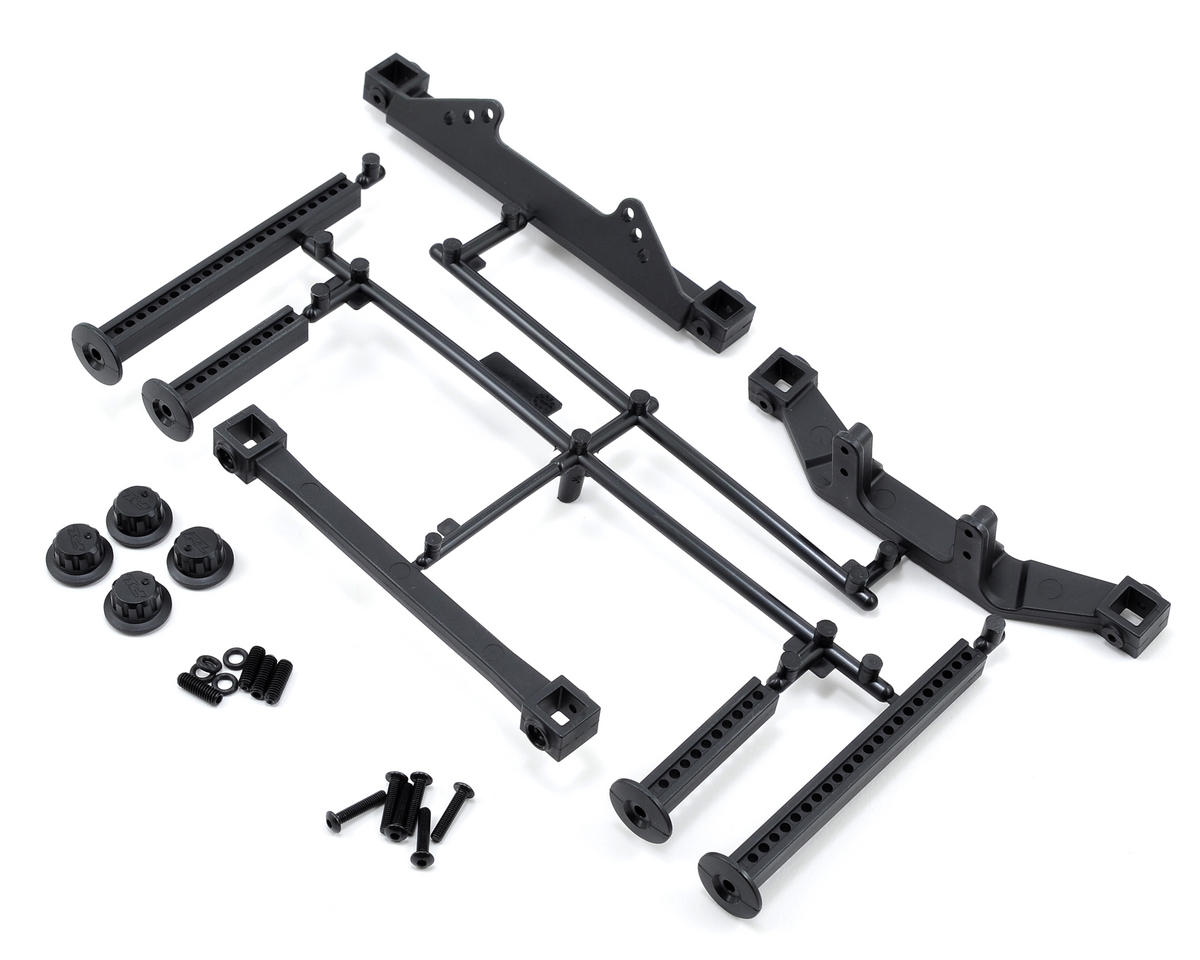 Once the Pro-Line Extended Body Mounts are installed on the vehicle, install the body and inspect it’s fit. Raise and lower the body mounts until you reach your desired height.

For our conversion, we found best results with the front posts mounted as high as possible, and the rear with five holes showing between the crossbraces.

Note: Despite the extended body mounts, our vehicle required some body trimming around the front and rear wheel well area. Please inspect your model for rubbing, and if necessary, use Lexan scissors to trim away these spots.

Before the new Castle ESC & Motor combo can be installed, the old electronics must be removed; thankfully, disassembly is very straight forward. Unplug the motor and ESC leads.Open up the receiver box with your 2mm hex driver and unplug the ESC receiver lead from channel 2 on the receiver (Be careful not to lose the large waterproof rubber seal that fits under the receiver box lid; you’ll need it later when reassembling). Use your 2mm hex driver again and remove the two M3 screws that secure the Traxxas ESC to the chassis – your ESC should now be free to remove. 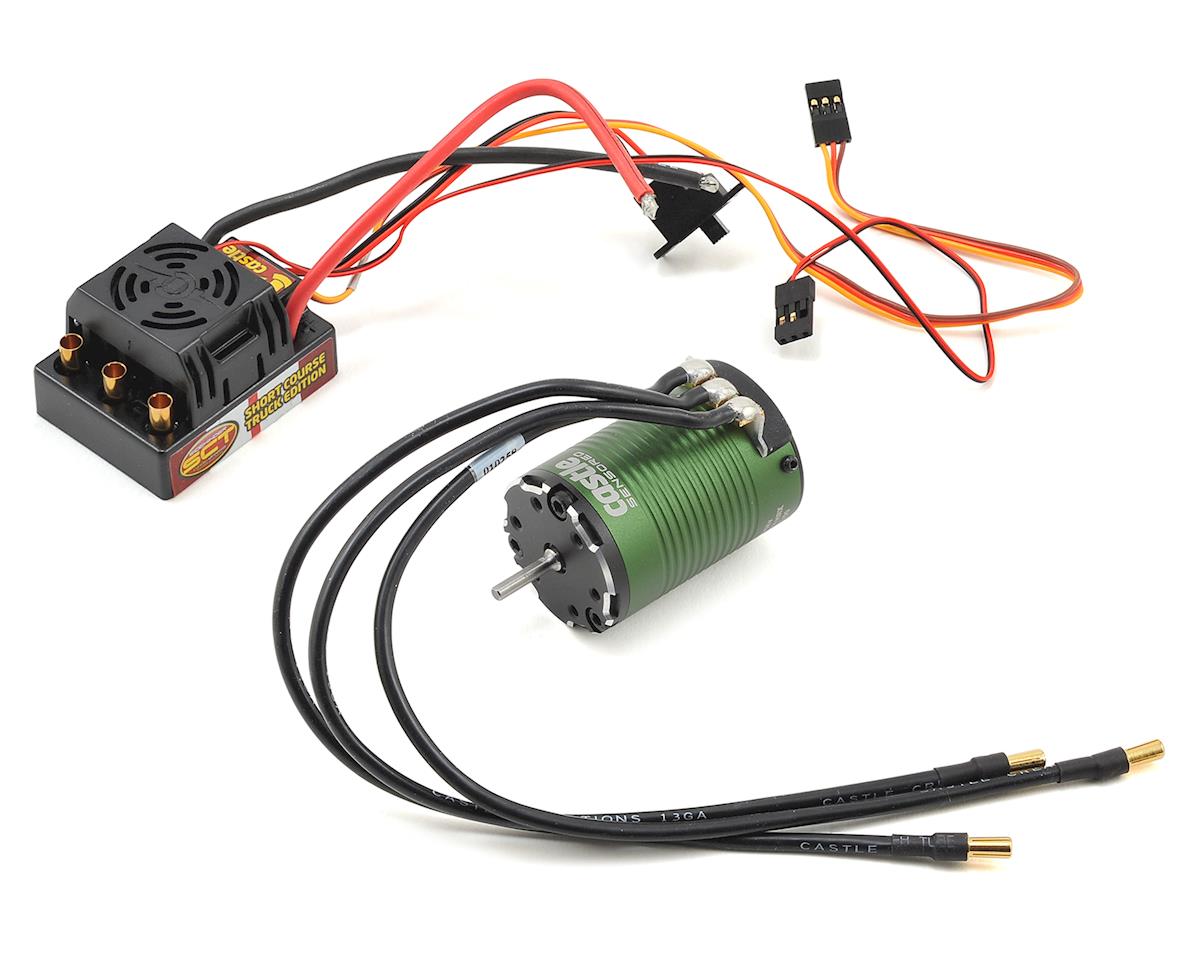 With the stock motor out of the vehicle, it’s time to install the upgraded Castle Creations 1410 Motor. Use the original two M3 motor screws and bolt the Castle motor to the motor mount (route the motor wires through the rear shock tower hole, exactly like the stock configuration). Don’t tighten the motor screws too much; the gear mesh still needs to be set! Use a 1.5mm hex driver and remove the pinion gear from the stock motor and install it on the Castle motor shaft. When installed, set your gear mesh, tighten the motor screws, and re-install the gear cover.

*If you need help setting your gear mesh, here is an AMain tutorial video for help.

Gearing Note: Because this Monster Slash conversion uses larger diameter tires and upgraded electronics, it is highly recommended to check your motor and ESC temperatures the very first time you drive the truck. If temperatures are too high it is advised to install a smaller pinion gear. For our build, we used a ProTek R/C Temp Gun (PTK-8310) to record temperatures on our first outing and temperatures were not an issue with the stock pinion. Your results may vary.

The Castle Sidewinder SCT speed control doesn’t have the same mounting tabs as the original Traxxas ESC. Instead, to easily secure the Castle ESC to the chassis, use some double sided sticky tape. We used ProTek R/C Double Sided Sticky Tape (PTK-2240) because it’s thick and vibration absorbent, which greatly helps handle the hard hits while staying secured to the chassis. 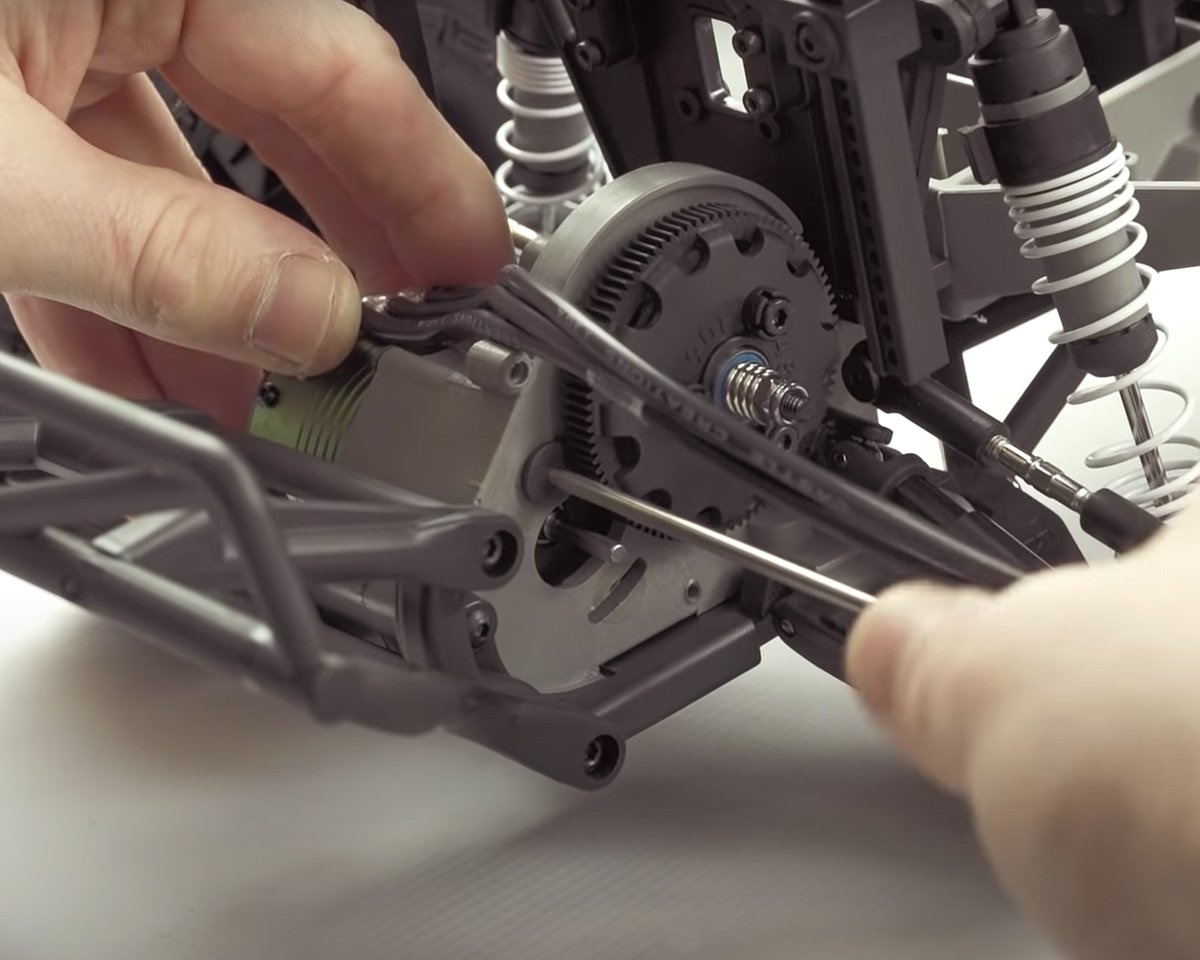 Now that the Castle Creations ESC and Motor are installed, you need an ESC connector. When brand new, the Castle Sidewinder SCT does not include a pre-installed connector; so one needs to be soldered on. For our build, we used a ProTek R/C Male T-Style Plug (PTK-5013).

*If you need help soldering a plug, here’s an AMain video tutorial to help you out.

The last step: Calibrate the Castle Sidewinder SCT before you go out and shred. Castle calibration is a walk in the park, just follow the included quick step guide.

*If you need help calibrating a Castle ESC, here is an AMain video to help.

When everything is complete, add a charged battery and put on the body and drive the truck on the ground very lightly! The idea is to give the truck a “shake down,” or an opportunity to present any small issues, as well as catastrophic ones. Pay close attention to odd sounds, smells or characteristics of the vehicle; if something doesn’t seem right, investigate it immediately! Otherwise….

Now go terrorize your neighborhood and have fun with your new Monster Slash!