We've got the 2021 Corvette Stingray in R/C form with all the scale details of the real mid-engine supercar in 1/10 scale form. We go over this new car, the scale Corvette body, and the updated 4-Tec 3.0 chassis that sits underneath it. So how cool is the new Corvette Stingray? Let's find out. 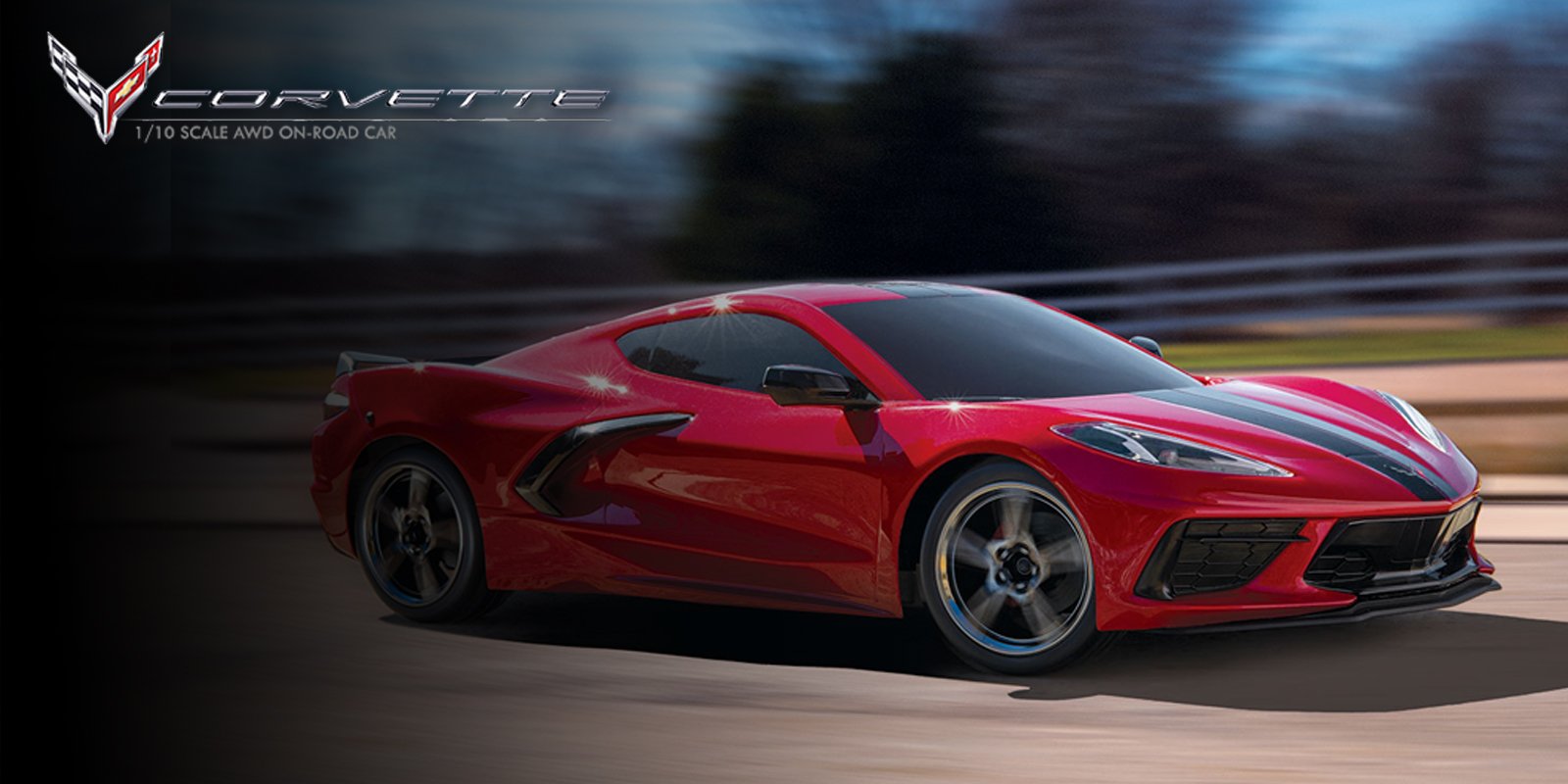 The new 2021 Corvette Stingray is a wild car with nearly 500hp and almost 200 mph top speed. For you R/C fans, you can now have an officially licensed scale version for a fraction of the price. The R/C version comes in four pre-painted body colors, and they all come ready to run. They are pre-assembled with electronics, and the body is detailed and painted right out of the box.

What do you need to get on the road?

You need a few items to operate the car: 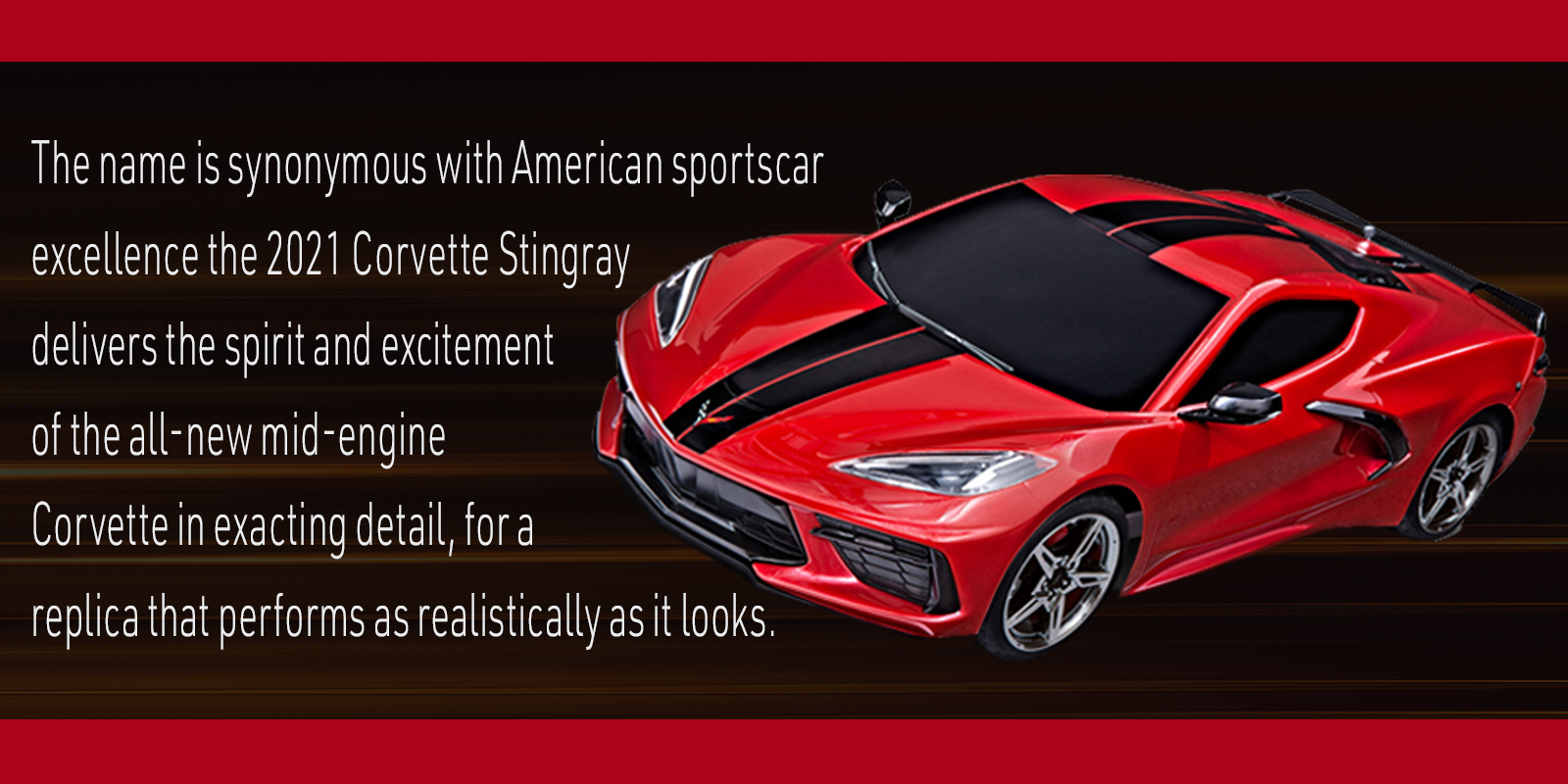 This body is mainly made from lexan material, painted, decal'd, and finished with hard plastic scale details. The front grille and headlight section is an excellent example of these details. Even though LED lights are not included, the headlights are ready for you to add your own or add the Traxxas led light kit separately. 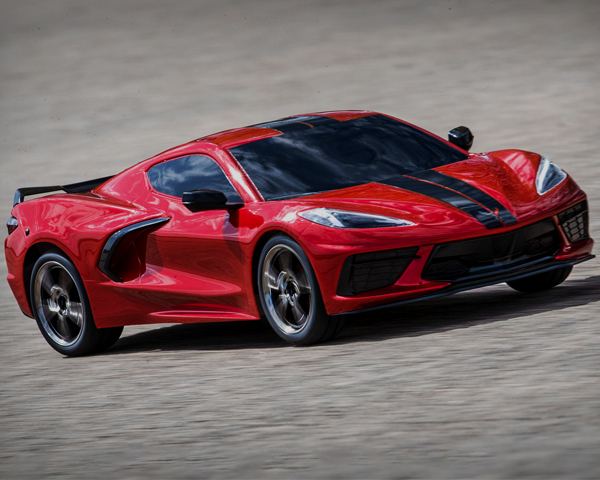 What is so impressive about this car is the scale detail. 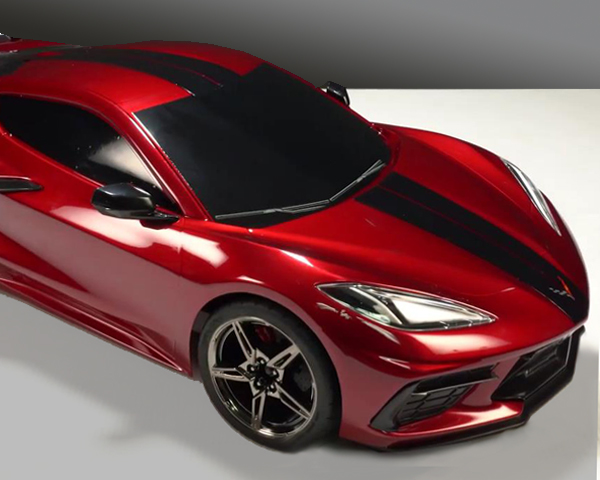 The next big scale detail on this body, and perhaps the coolest, is the recreated engine bay on full display for all to see. Although it's just clear lexan and not glass, you get a good look at the decals and scale accessories that display the 16-valve V8 engine. You can also see the bottom of the engine bay. It is sealed up from the underside, but you can access it to customize the engine details. 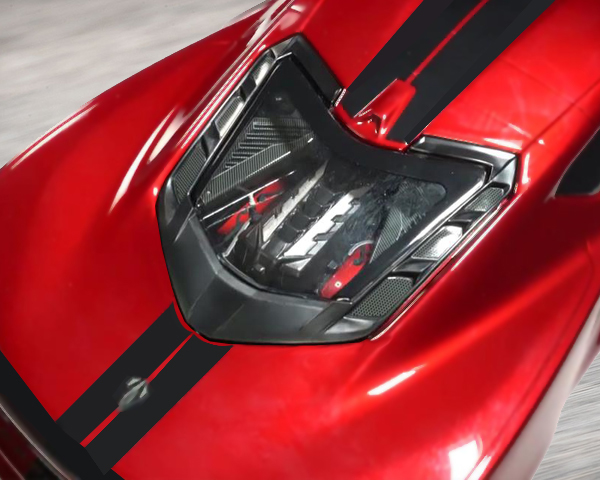 We are following the racing stripes down the back. The Corvette Stingray has a hard plastic spoiler and more realistic details to finish the rear end, like our stylish taillights. Just like the headlights, they are LED ready. However, you'll need to purchase those separately. 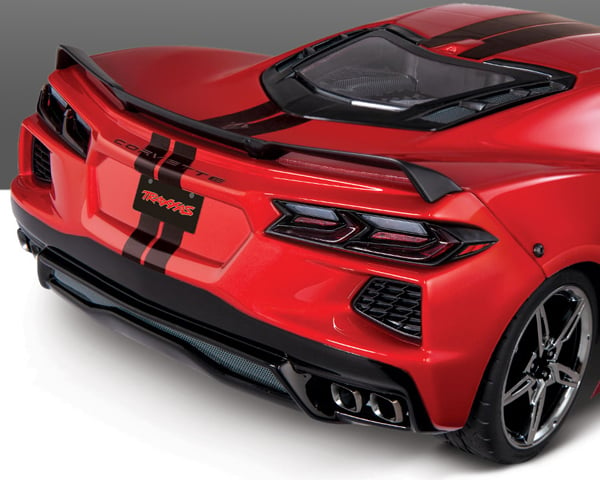 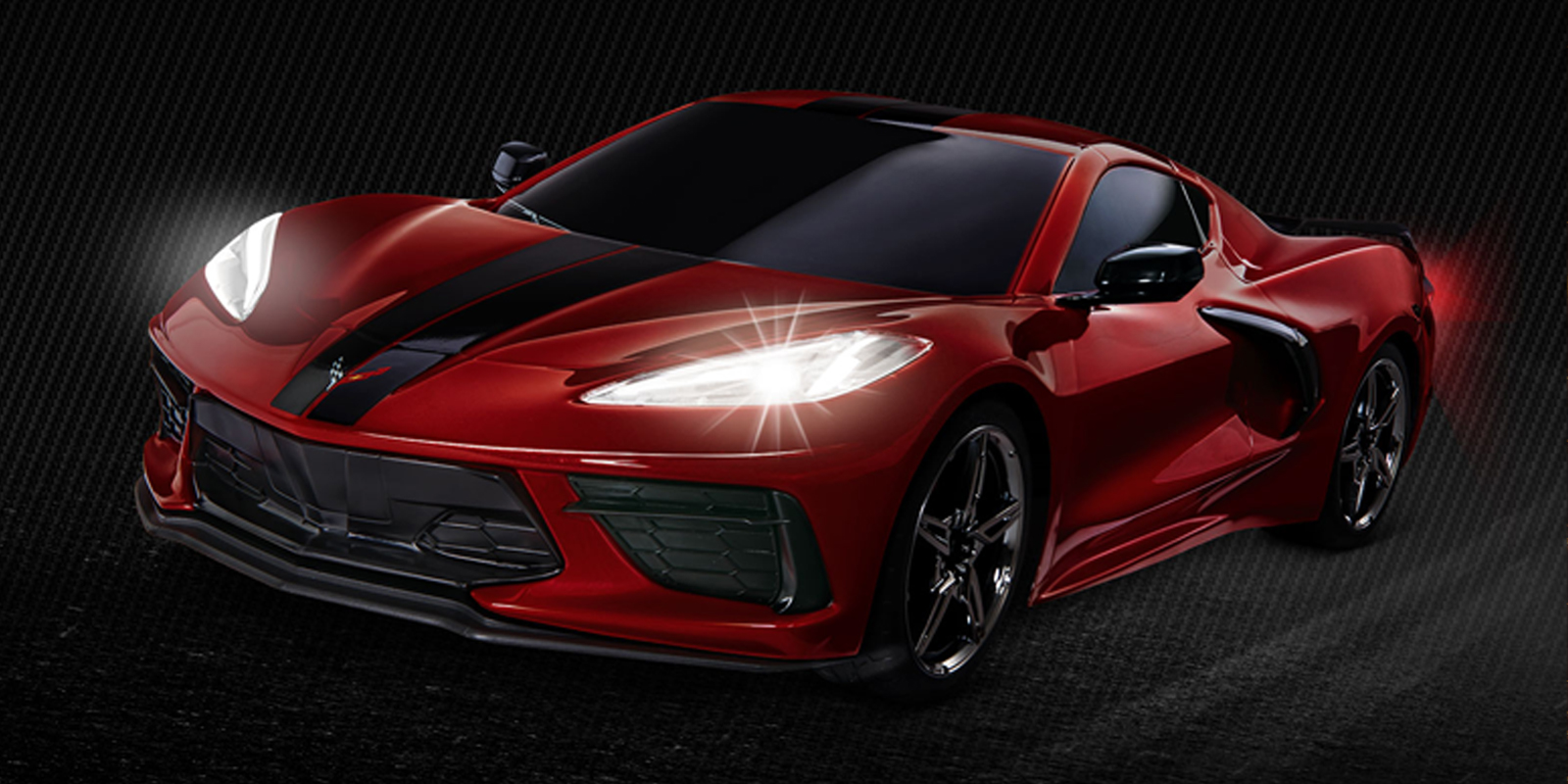 One of the coolest R/C aspects of this body is the use of the new Traxxas quick-release body system. This system uses hidden clips underneath the body to secure it to the chassis.

This small but important detail removes the visible body clips that normally rest on the body. No visible body clips give the Stingray the clean and realistic look it deserves. There is a second element to this quick release system, and that's how fast it is to use. 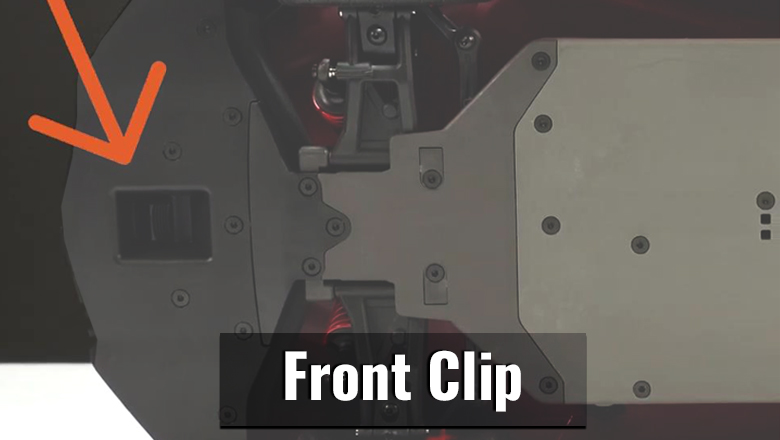 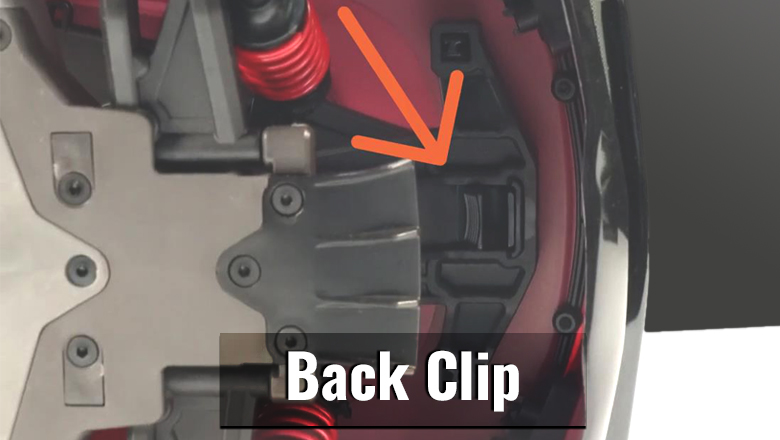 If we flip the car over, we see one clip in the front bumper and a second in the rear. When you're ready to remove the body, you reach under there and pinch each clip and lift. To install the body, align it, push down and clip it in—that's it. It's hard to describe how cool and convenient this system is, and of all the clipless systems we tried, it's easily the fastest to use.

Moving on, let's check out the new 4-Tec 3.0 chassis, which looks like your standard 4WD touring car, but it has no traditional body mounts. Instead, our front clipless system is integrated into the front bumper mount, and the rear mount floats behind the shock tower. 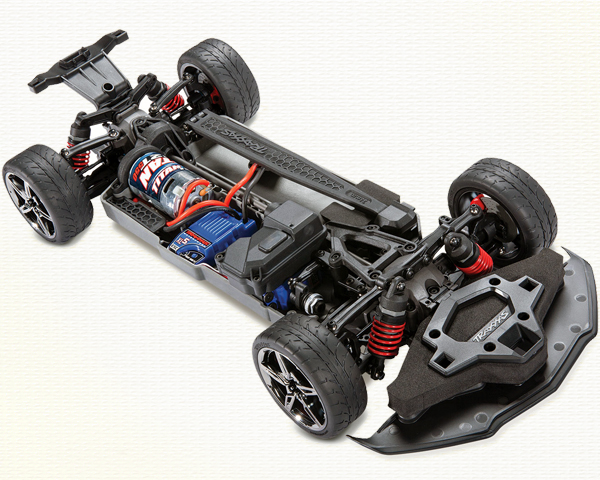 The remaining configuration is pretty standard. It includes a low center of gravity mid-motor layout, independent front and rear suspension, front and rear gear differentials, and oil-filled shocks. It also has a steel center driveshaft.

The driveshaft is bearing supported to run straight and true at high RPM driving. For the remaining driveshafts, the 4-Tec 3.0 uses one-piece steel driveshafts at each corner. 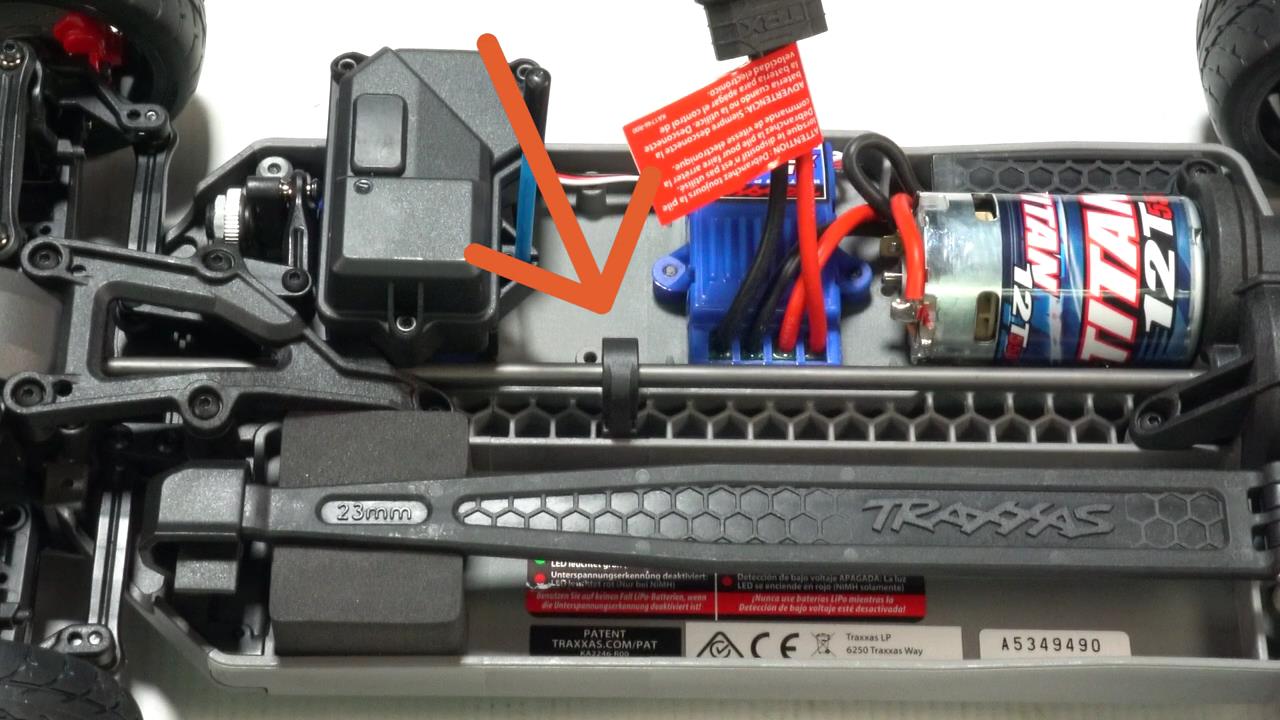 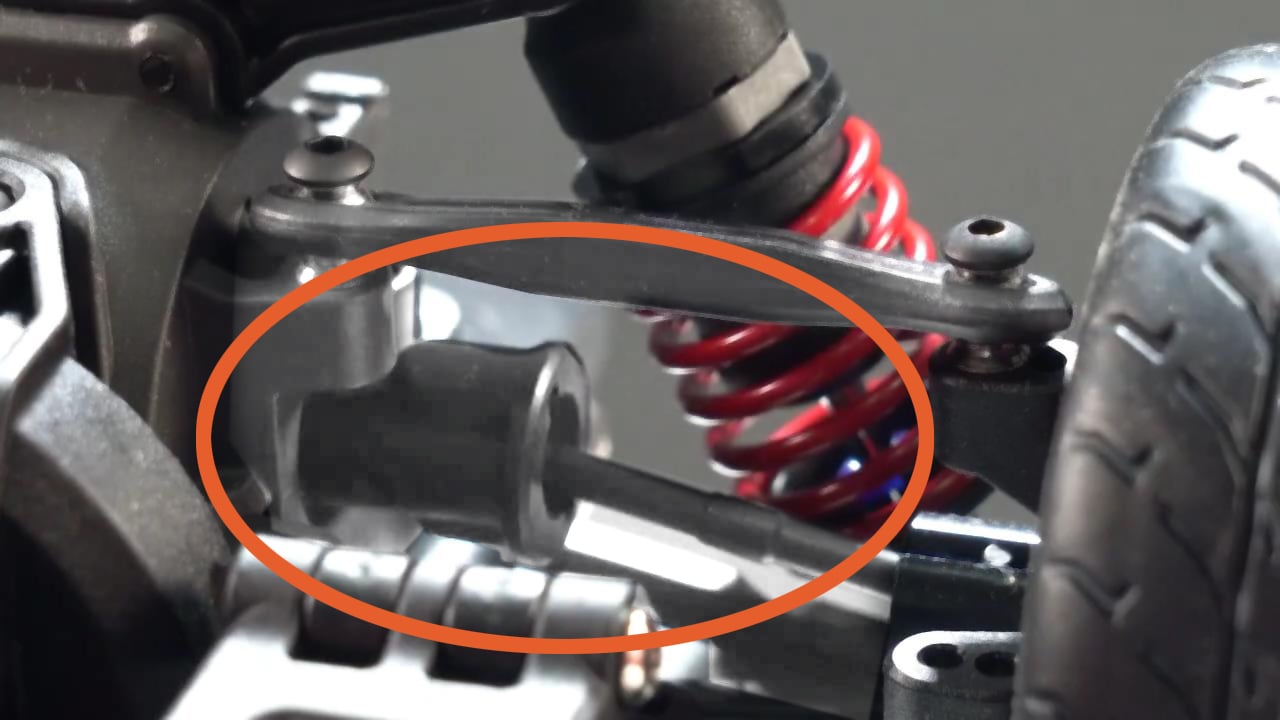 For the electronics, we have the Traxxas 2075 waterproof steering servo that features an adjustable servo saver, which is a really nice feature. We also have a micro receiver protected inside a waterproof receiver box. The included ESC is the XL-5 brushed ESC with a max LiPo limit of 2S, and it uses the Traxxas ID battery connector. The motor power is supplied by a Traxxas 12T 550 sized motor that uses a fixed mesh system that’s really easy to access. 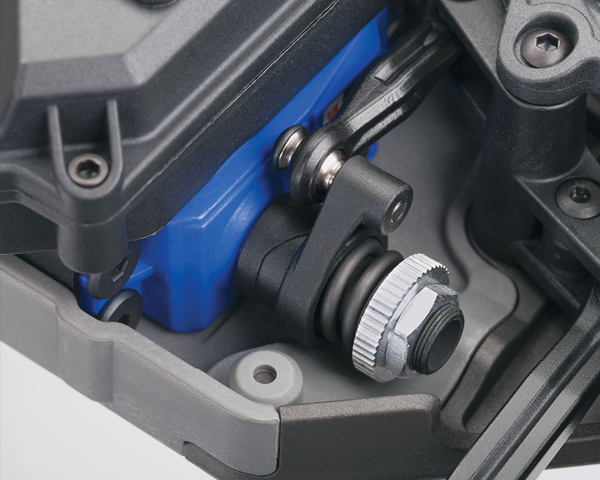 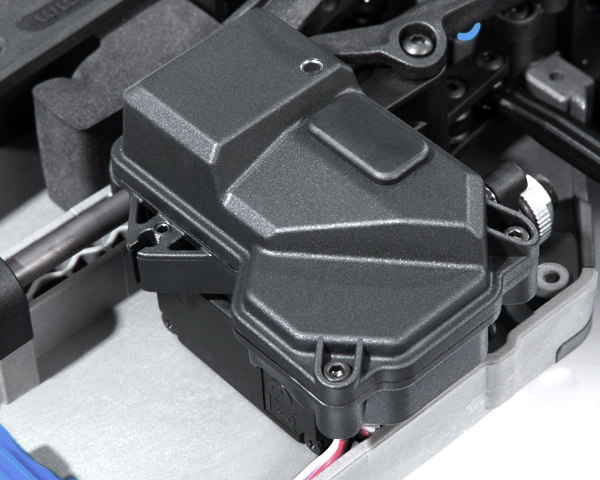 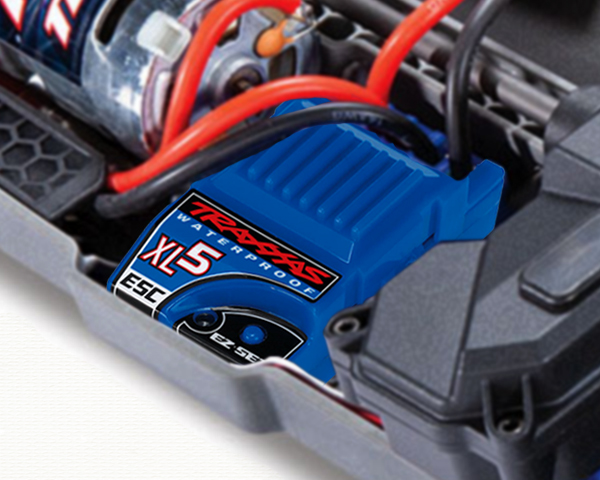 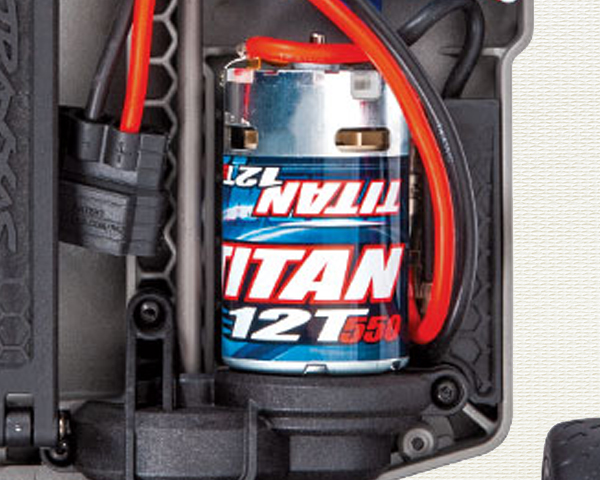 If you remove the four screws holding on the spur gear cap, it comes right off, freeing the motor. This fixed-gear mesh system only works with the included 72T spur gear and will accommodate a pinion gear range between 17T and 27T.

Included and installed on the vehicle is an 18T pinion gear ideal for your everyday driving. 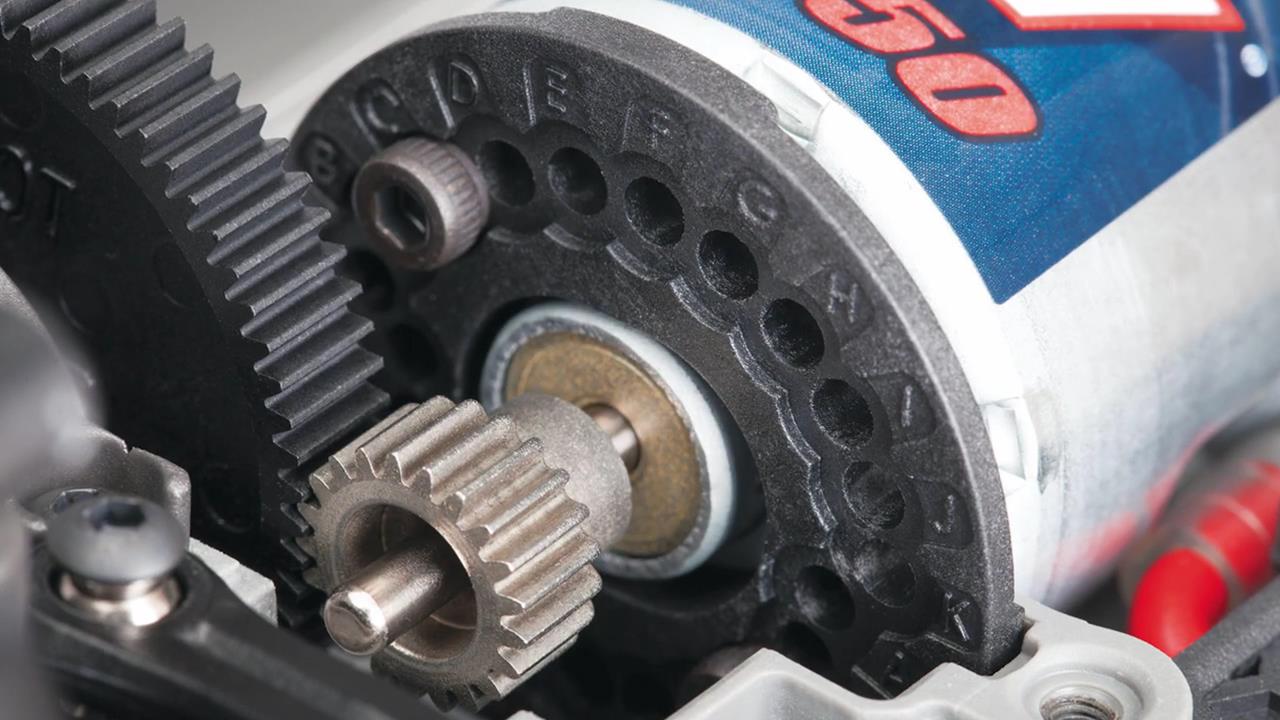 How fast does the Traxxas Corvette go?

Using the SkyRC GPS speed meter, we tested the gearing with our fully charged Traxxas 2S LiPo. Again, driving back and forth on the open road, and after a few passes, we were able to reach a top speed of 22 mph.

Traxxas includes a second pinion gear for extra speed. It's a larger 22T, but this gearing is too tall for everyday driving and is only used for testing top speeds. So, to test it out, we installed the 22T pinion on the car, recharged the battery, and tried again—this time, we achieved 28 mph.

Without using more powerful brushless electronics, the car can go only so fast, although it is designed to withstand a lot more straight-line speed. Here's a comparison of the older 4-Tec 2.0 and the 3.0. It's clear the 3.0 is a lot longer than the 2.0. However, the inside configuration and parts are almost identical. 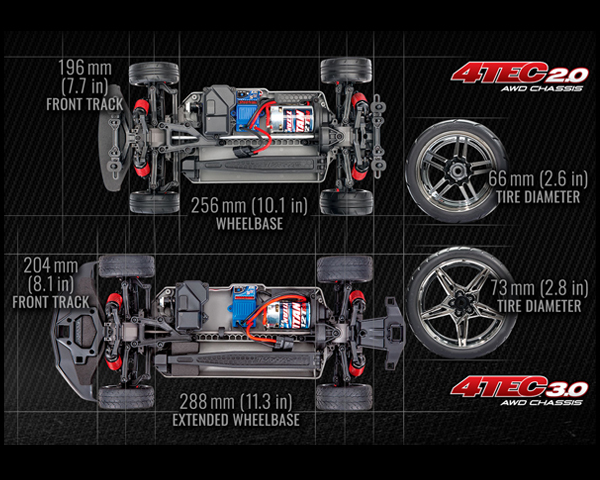 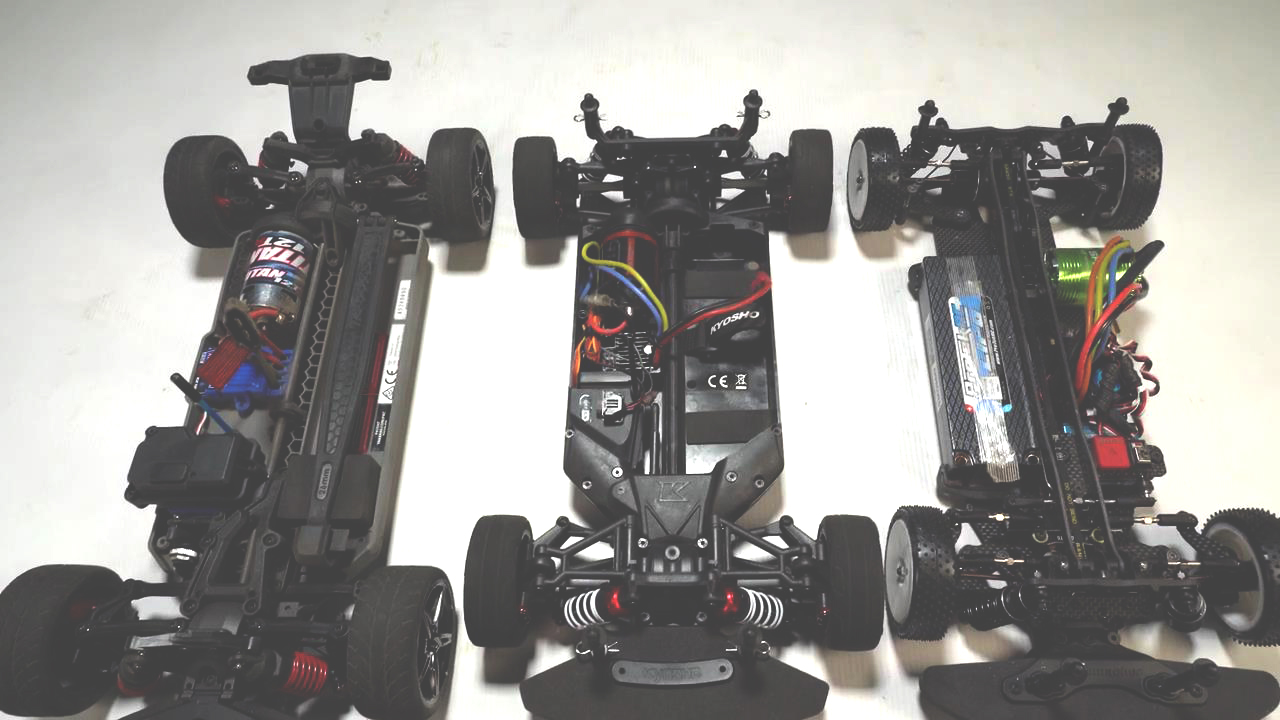 Shorter wheelbase cars tend to have more steering agility and nimbleness. Therefore, they are great with twisty turning environments, like a racing circuit. But on the other hand, longer wheelbase vehicles tend to be more stable and comfortable, especially at higher speeds, making them great as speed run cars. 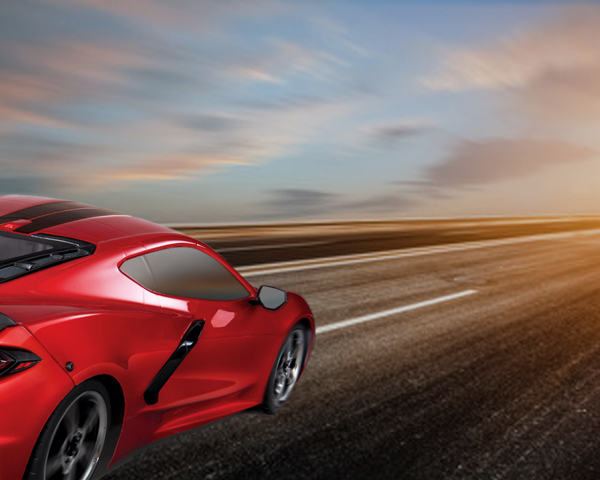 To make this even more true— Traxxas went ahead and gave the Stingray all new tires and wheels. They are a larger diameter than the original, or any other touring car tire, for that matter.

As a result, the tires are not only extended taller in diameter, but they're wider by 4mm on each side. A wider tire widens the stance of the car and increases stability. Thus making the 4-Tec 3.0 not only longer than the 2.0 but also wider. 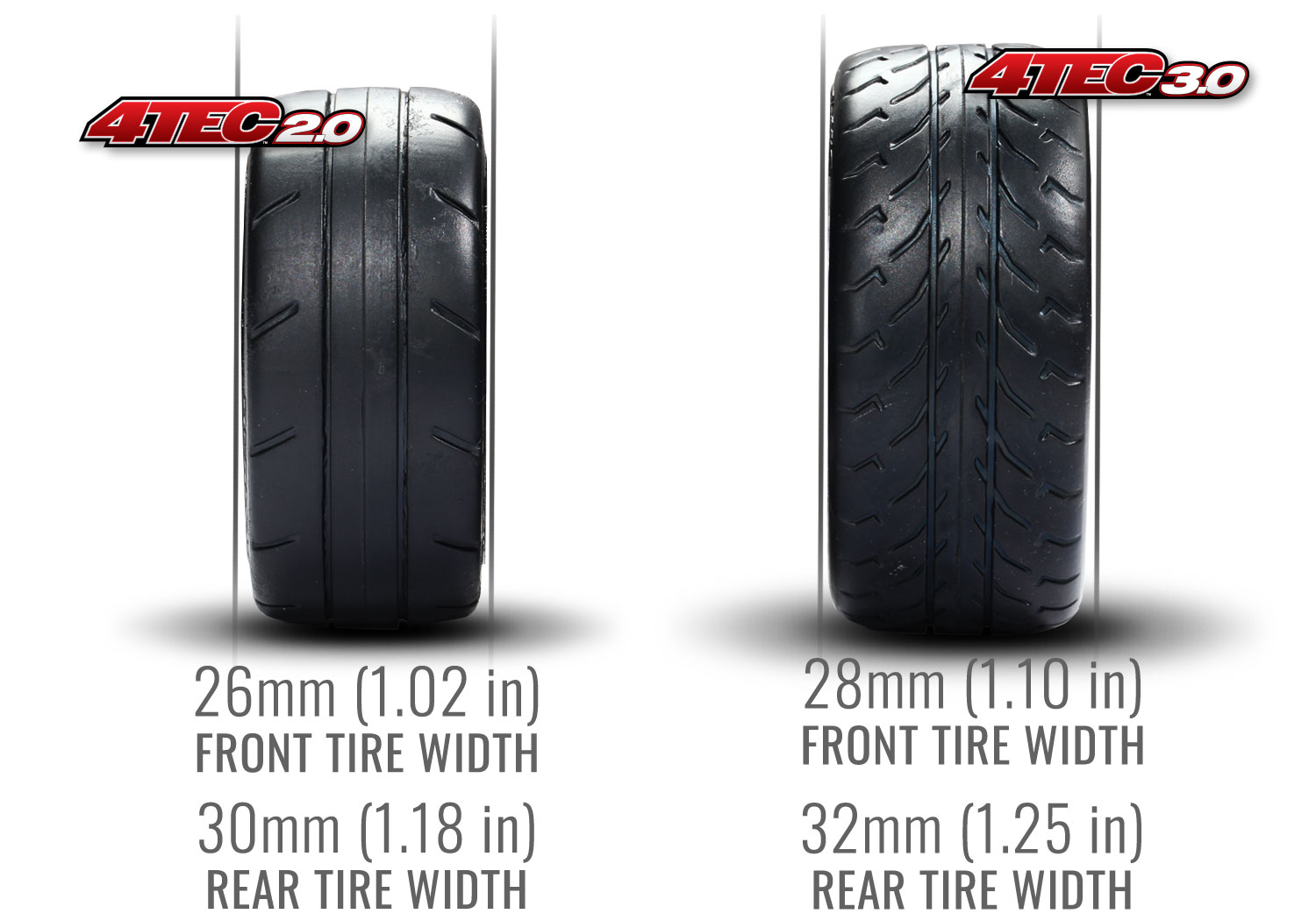 Although aftermarket tires will fit the Stingray's special sized tires, their smaller sizing may be an issue for some people. Aside from the apparent difference in appearance, using a shorter tire is like gearing down on the motor pinion. The smaller tire effectively produces less top speed but more initial torque. You could counter this by gearing up on the pinion when using smaller tires.

It's not an issue, just something to be mindful of if you want to swap out the stock tires. 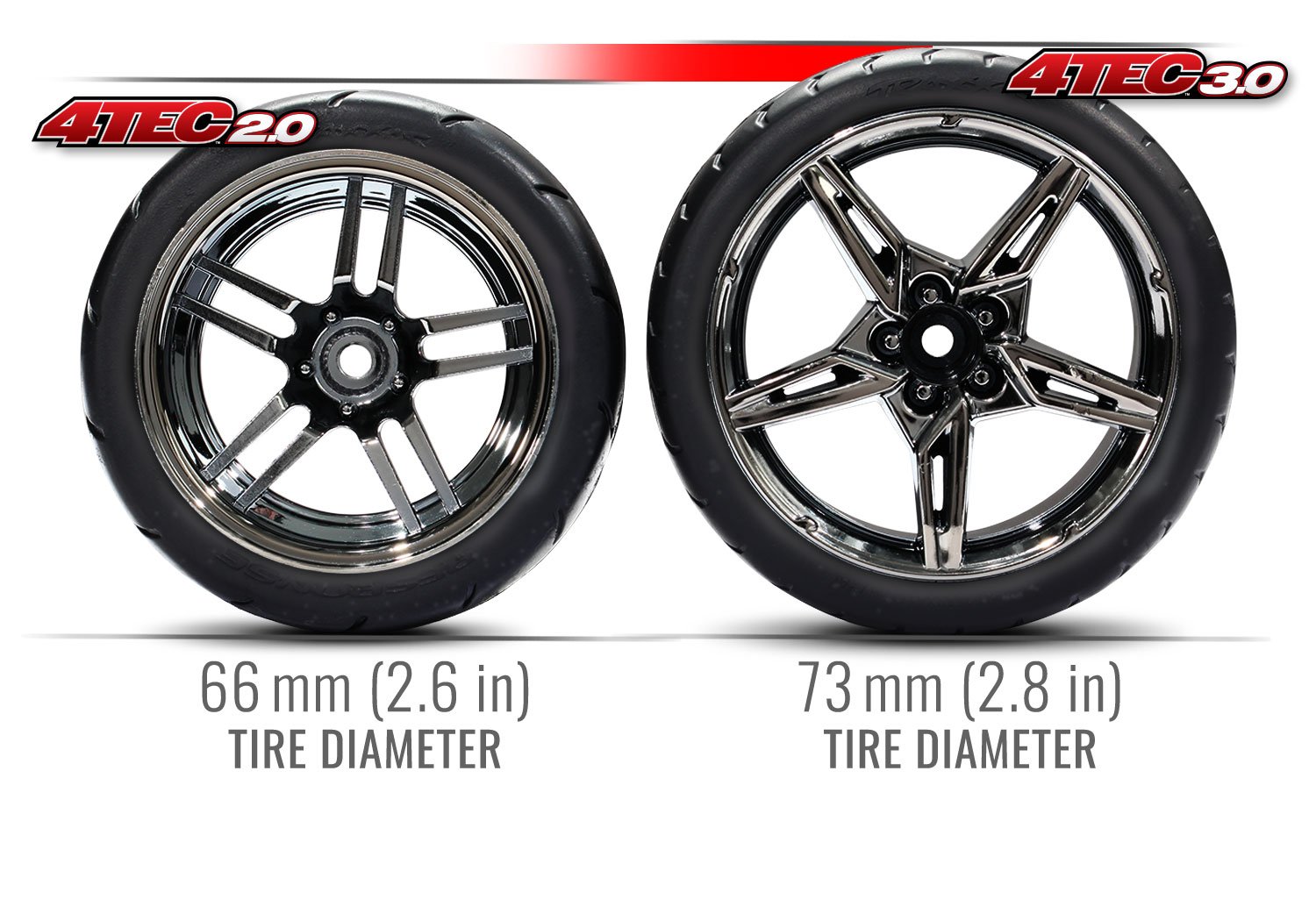 So, the 4-Tec 3.0 uses a stretched chassis. It has oversized tires and wheels, a metal driveshaft—it's set up and configured for big power fun. The included electronics are great for someone new to R/C. But the car is ready to rip with brushless electronics for those looking to take things to level 11.

Maybe Traxxas will provide a VXL version down the road, idk? 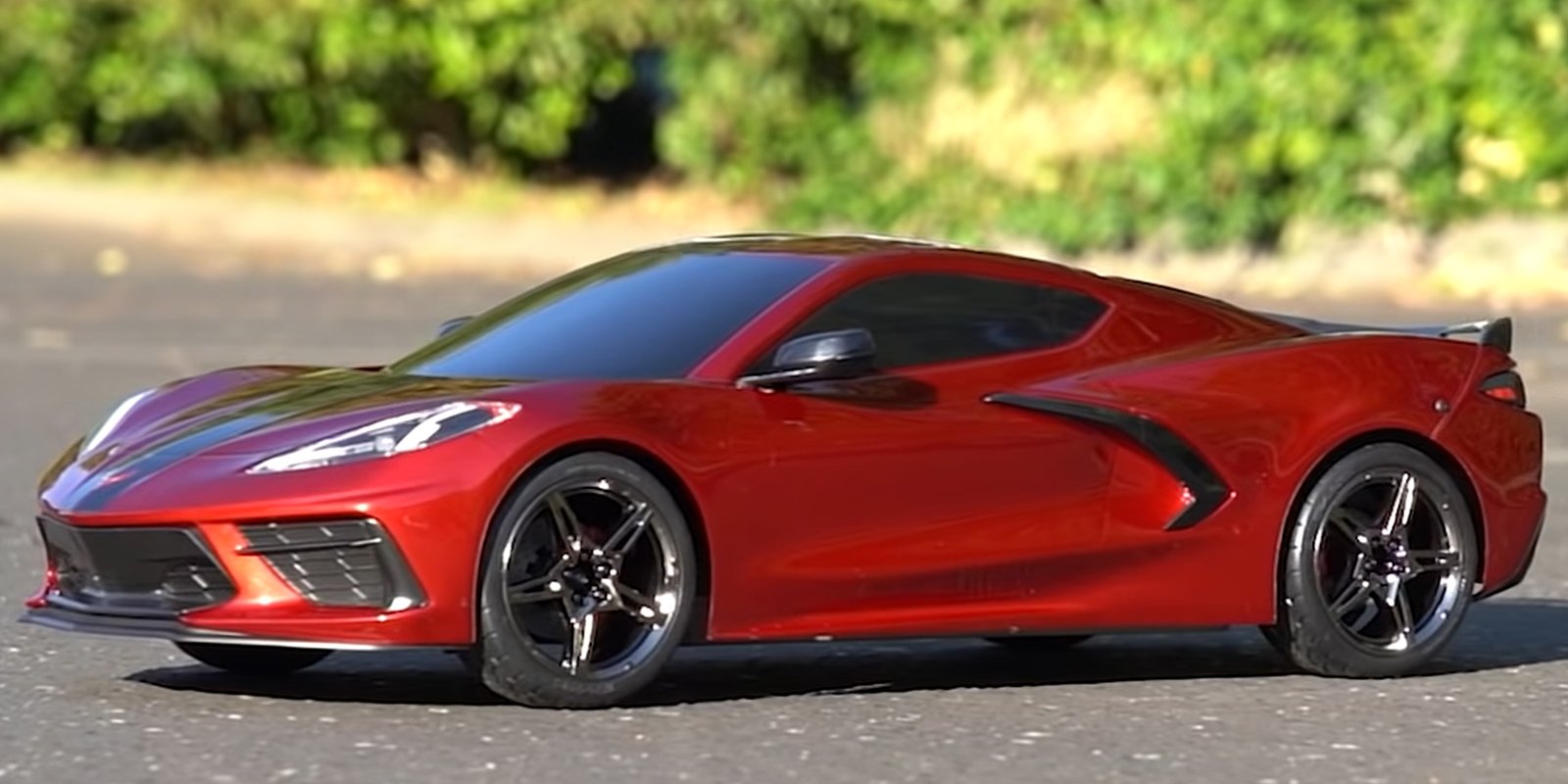 We had a great time with the Corvette Stingray out in the parking lot. The steering is very sharp and precise, and our lot racing was a blast. So if you get tired of bashing around, try it up and down a private road—we did!

After all our driving, we had no issues with the car or body, and no parts broke. We hit a few curbs, so the body has a little rash on it, but it's pretty minimal.

The worst thing we can say about the car is that dust got into the engine bay. I would probably add a small bead of silicone around the edge to seal that up. But be careful; the silicone also has a chance of pulling up the paint when/if you remove the engine bay. 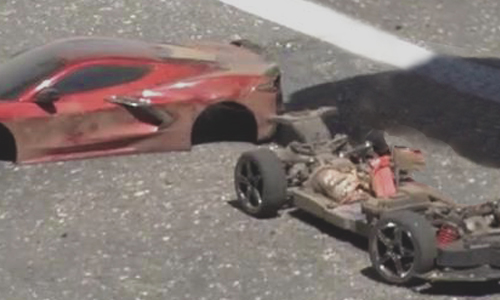 The Corvette Stingray is a cool little car with an excellent body fastening system. It would be awesome to add a high-powered brushless system in the car and see how fast it can go, but maybe another day.

Watch the Corvette 4-Tec 3.0 review on our YouTube channel, and while you're there, be sure to check out more new product review videos.