Top 10 RC LiPo Battery Mistakes & How to Avoid Them

We use lithium batteries in almost all the devices nowadays, but we don’t really think about the battery. Because ultimately, we have very little control over them. To charge most devices, it’s a matter of just plugging in your charge cord, and that’s it. That’s what makes the radio control hobby so unique because when it comes to RC LiPo batteries, we have complete control over them. We control what batteries we pick, how we charge them, how we discharge them, how we store them, how we use them, and ultimately how we abuse them. So that’s why we’re going to go over our top 10 LiPo battery mistakes users make and how to keep your LiPo batteries healthy. 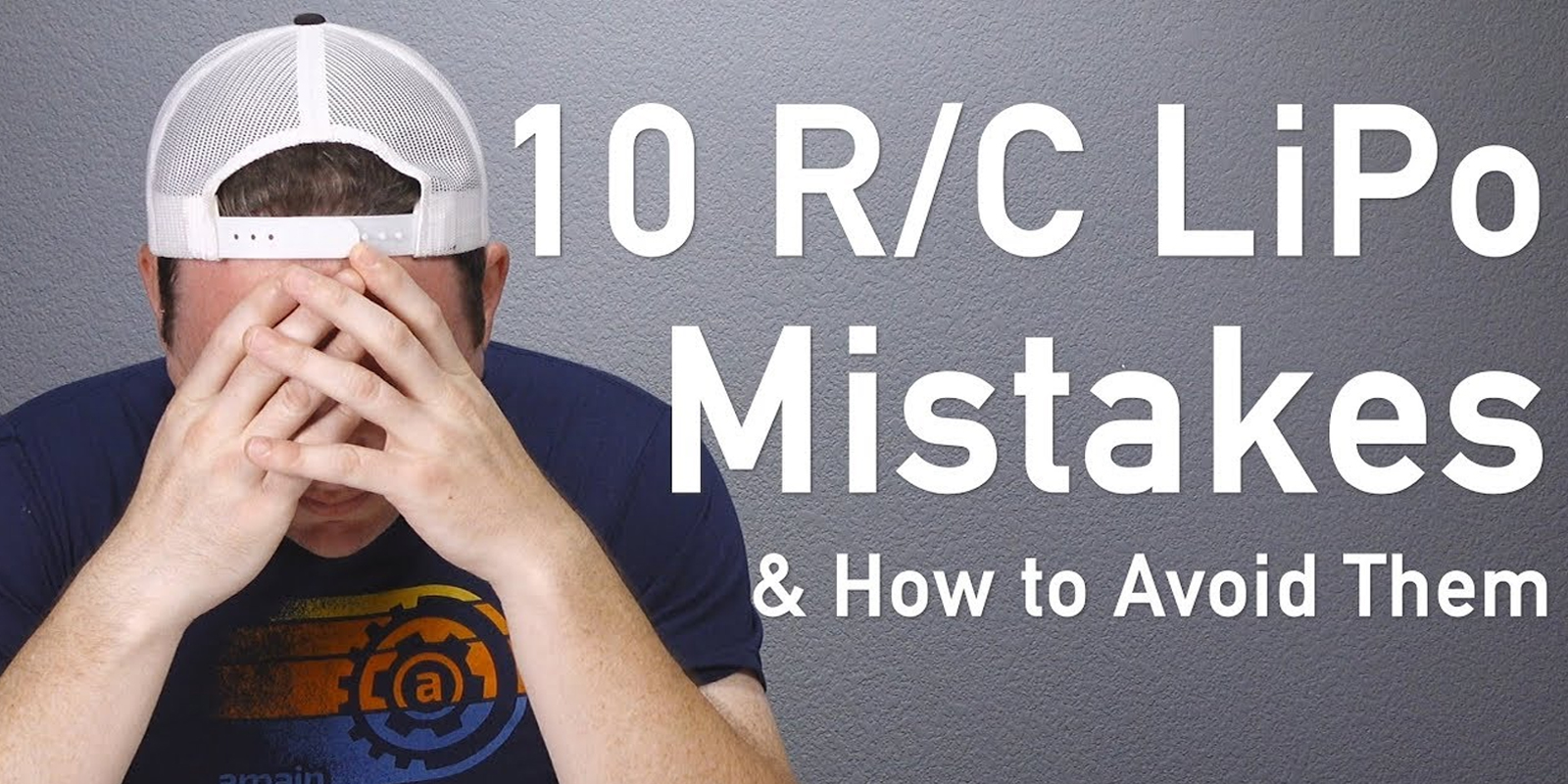 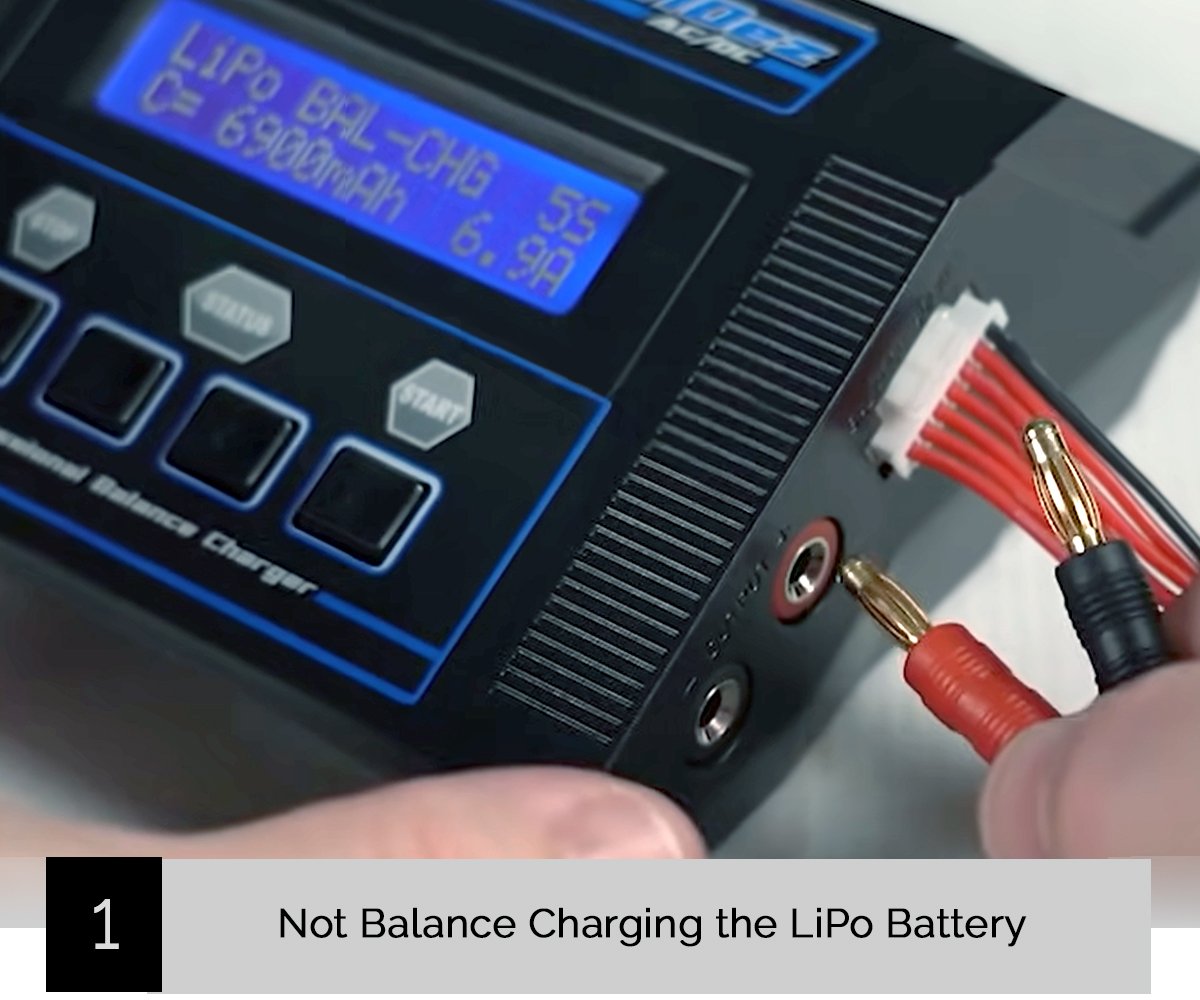 Tip 2 – Discharging the LiPo Down to Zero

Draining a LiPo battery down to zero energy creates a hazardous condition and will ultimately destroy that LiPo battery. This is because the absolute maximum the individual cells inside a LiPo can be discharged is 3 volts per cell. Beyond that, permanent degradation will take place in the battery. 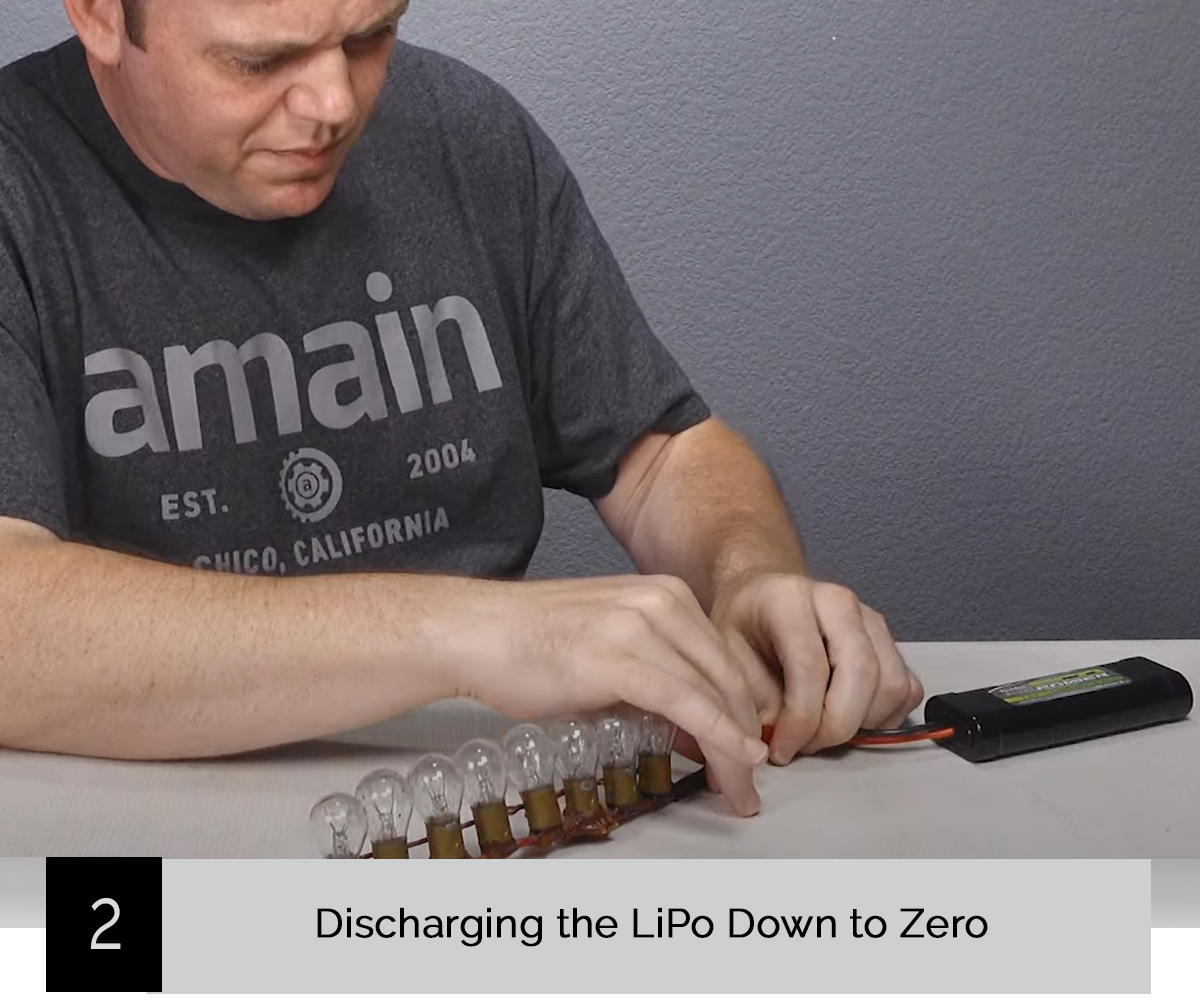 All modern ESCs or electronic speed controllers designed for LiPo use will have some sort of LVC or low voltage cutoff, which cuts the battery and use when the battery’s voltage reaches a specific pre-programmed limit. We just said in number 2 that the maximum you should ever drain your battery is 3 volts per cell, but again that’s the maximum. We don’t ever want to come close to that. So instead, we want to check out what presets the electronic speed controller has for the low voltage cutoff and program one that will give us enough headroom. We have a bit of a buffer there if anything should happen, so the battery cells never reach three volts. We recommend a low voltage cutoff of 3.4 volts per cell. 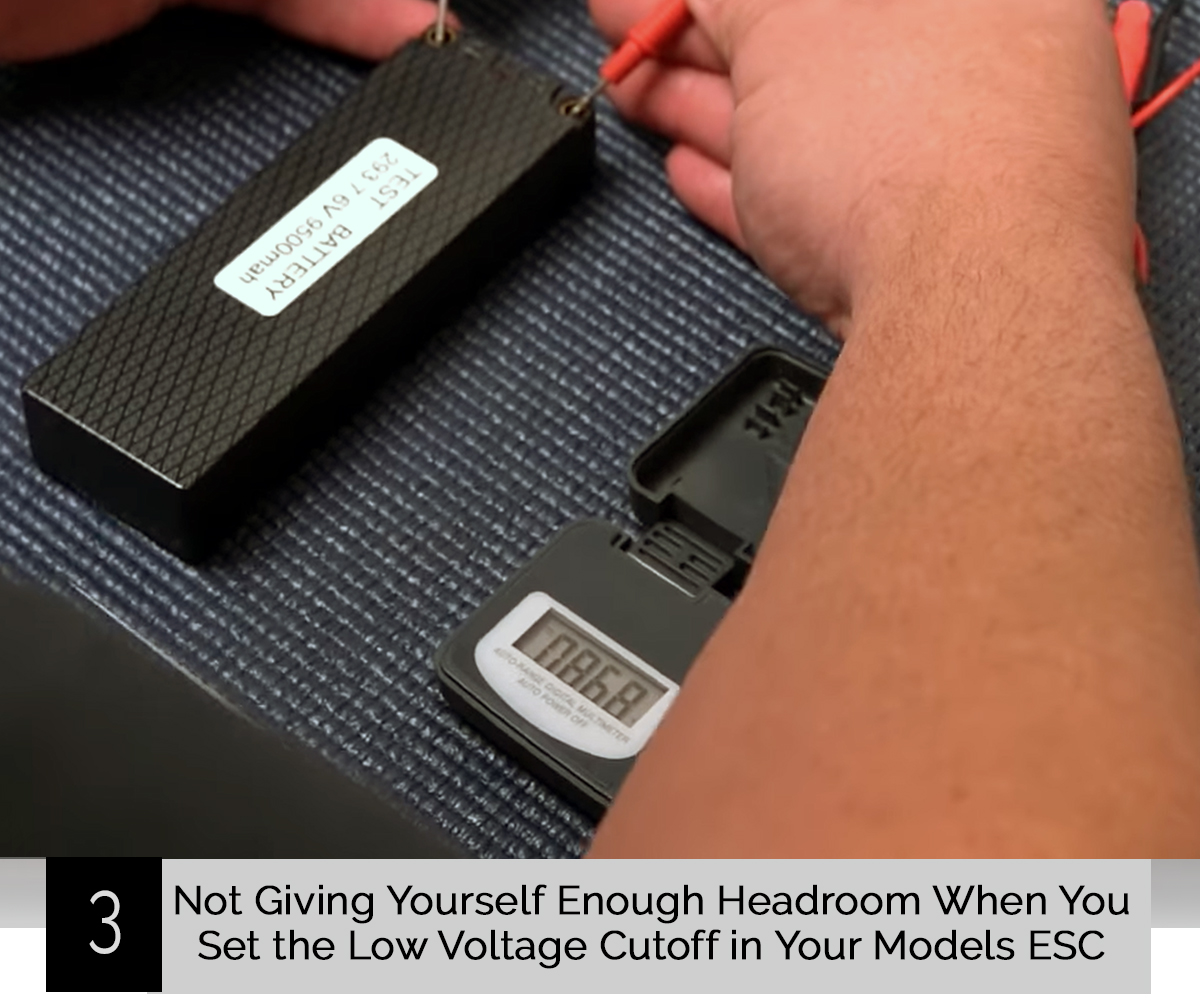 Let’s say you charge the LiPo battery with the intent of going out and using it, but instead, something comes up, and you can’t. So, the battery just gets set aside to be used some other day in the future. Well, if a fully charged LiPo battery is sitting around even for just a few days, it can start to experience cell degradation. This often comes in the form of swelling or puffing. So never let a fully charged LiPo just sit around. If you can’t use it in your model, put it back on your LiPo balance charger and set it to a storage charge. This will discharge all that extra power out of your LiPo.

Tip 5 – Failing to Storage Charge Your LiPo After Every Use

Even after using your LiPo battery in your model, the battery may contain too much energy. Or too little energy to be stored away for another day. So, after use, it’s really important to create the simple and basic habit of placing your LiPo back on the charger and setting it to a storage charge. This will bring your battery’s voltage up to a safe level if there is not enough. It will bring down the voltage if there is too much. Ultimately, lithium batteries can go bad if not used that why it is good to make a habit of always doing a storage charge, so the battery is at a healthy state to be stored away. 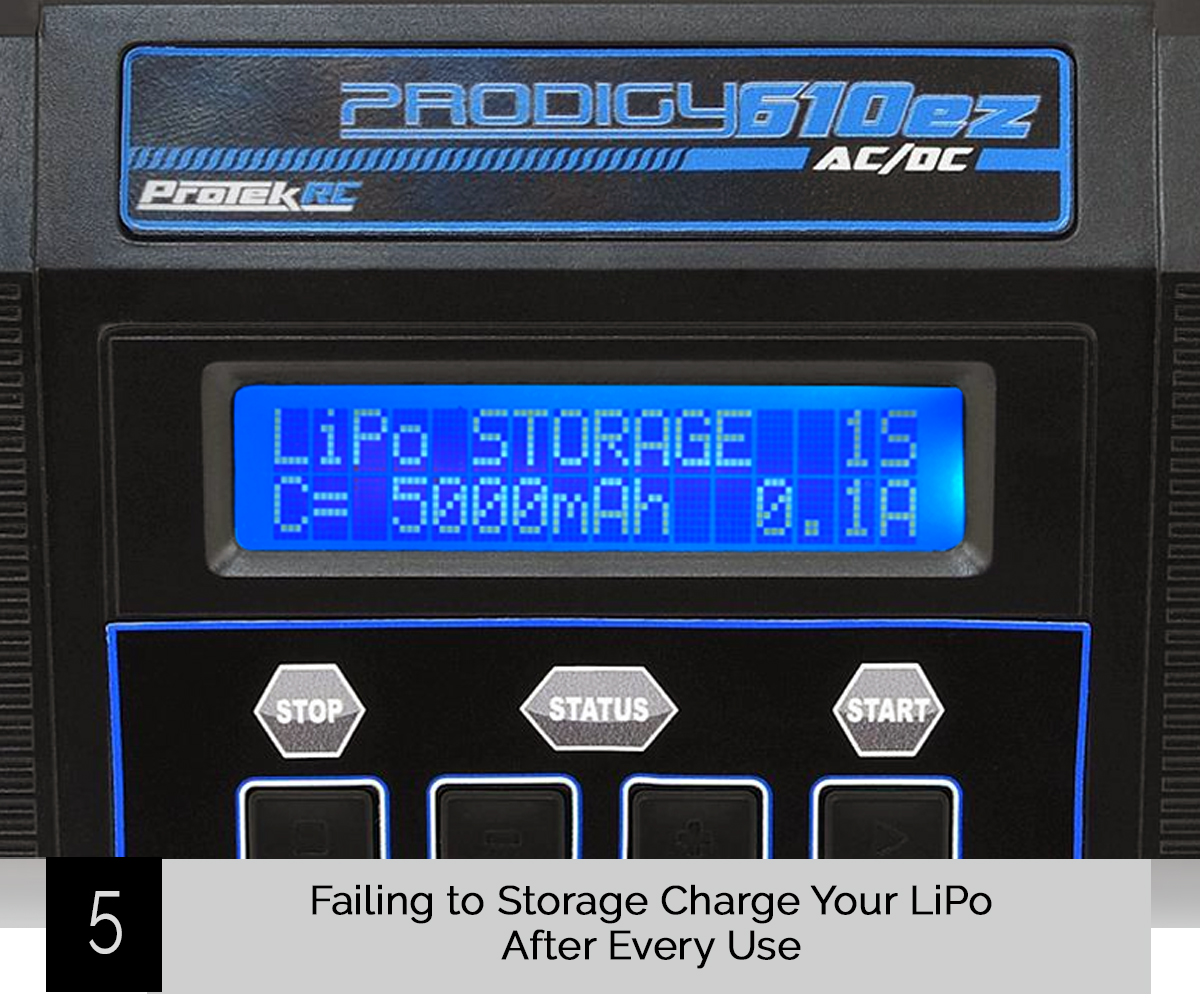 All LiPo manufacturers store charge their LiPo batteries before they get shipped out to be sold. Depending on where you buy it and how long the LiPo has been sitting around, the storage charge voltage may have dwindled. So, taking that brand-new battery and charging it or at least balance charging it will help bring the battery voltage up to a safe level and balance out its cells. Also, if you let that battery sit around too long and you don’t use it, you could be past your warranty date should you find out there’s some other unrelated issue. 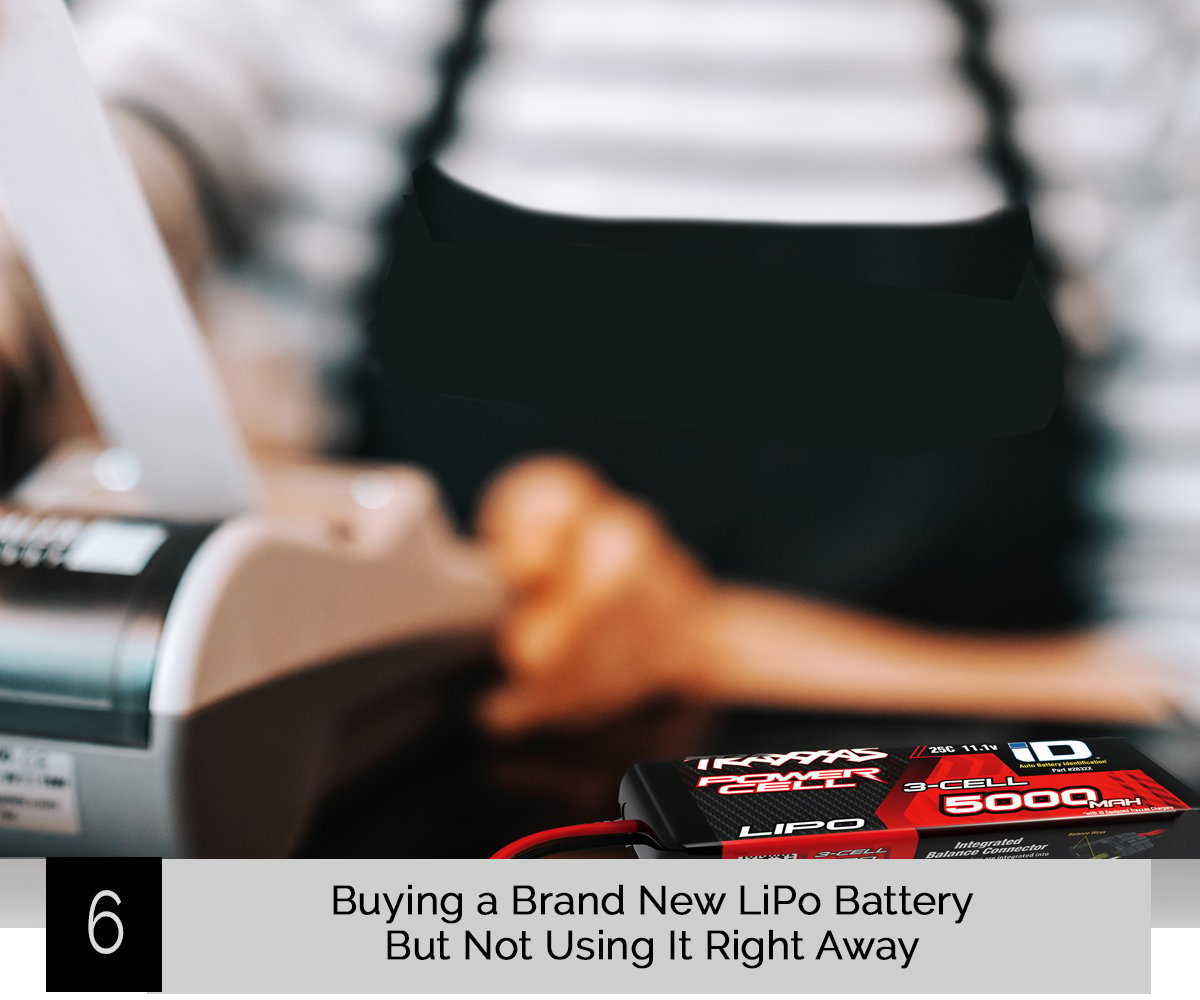 Tip 7 – Not Letting Your LiPo Cool Down

First of all, as you probably know, when you store your LiPo’s, they should always be stored in a cool, dry place. Let’s say you just got finished using your LiPo, and you want to charge it again to play more. It’s important to let it cool down before you recharge it. Charging a hot LiPo battery will degrade it, and if your LiPo is really hot after you’ve just used it in your model, it could mean that the C rating is not adequate for your application. It could also mean that your LiPo battery was discharged too far. Going back to point number three, “ensure that your LVC has enough Headroom.” You can charge your batteries and use them just fine when it’s very cold outside. That cold temperature will not harm your LiPo batteries, but cold batteries don’t retain the same energy that they do under normal ambient temperatures. So in cold weather, your battery may feel like it just has less power or less punch. 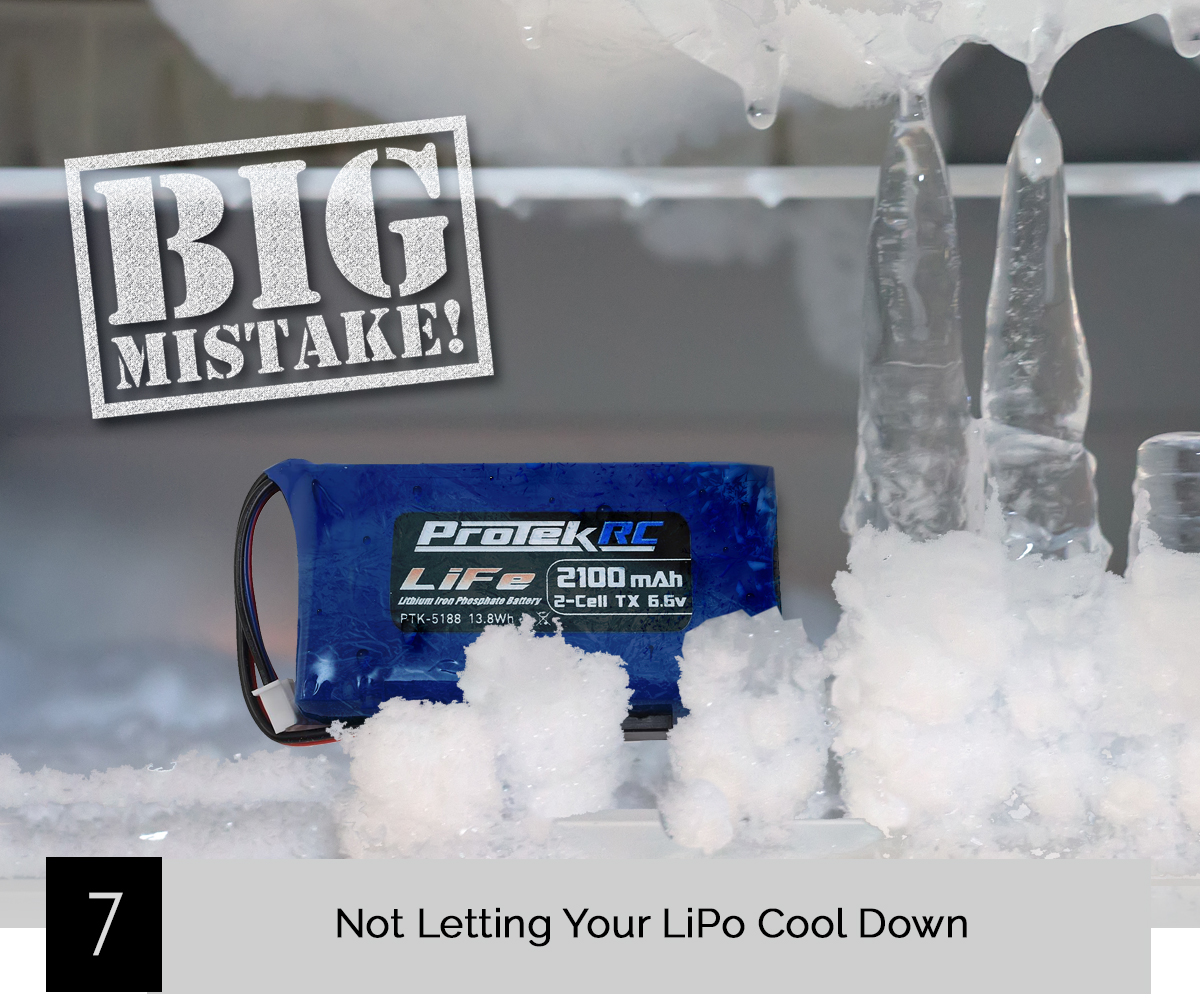 Note: If you’re curious if there’s any harm to putting your LiPo battery in a refrigerator or a freezer, there is. But the actual damage is not when the LiPo is inside the refrigeration unit. When you pull the LiPo out when it’s colder than the ambient temperature, condensation can form inside the LiPo, which is harmful and unhealthy for the pack. This may be obvious, but don’t leave your LiPo in a hot car.

When we buy used cell phones, we don’t worry about the battery or how it was charged or used. Only in R/C do we have control of our batteries. That means when you buy a used LiPo battery; you don’t know how it was used or abused; charged or discharged; where it was stored or where it wasn’t. That’s why unless you’re absolutely certain of the history of a used battery, it’s not a good idea to buy used LiPo’s if you can help it. However, there are some exceptions, like Spectrum Smart Battery Technology. These LiPo’s are now coming with a microchip that will relay the data of the battery’s history. That information could be really handy if you want to buy a Smart battery in used condition. 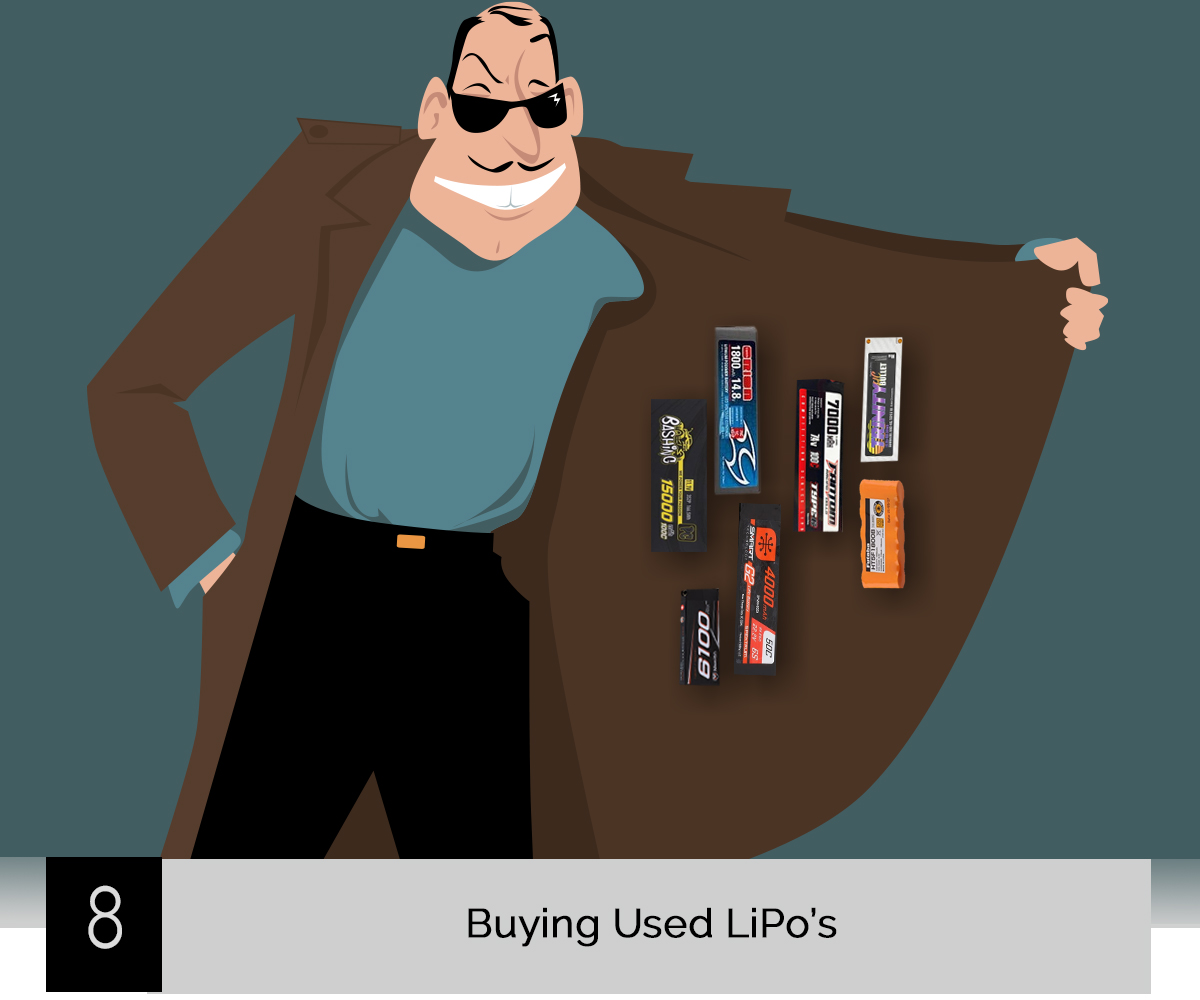 Suppose, for whatever reason, you have LiPo batteries that will be sitting around without any use for months or maybe even years until you will use them again. If you need to store LiPo batteries for a long time, it’s imperative to stick that battery on the balance charger at least every six months. Rebalance the cells and bring their voltage back to a healthy state. An even better practice would be to take a cell checker and plug your LiPo into that cell checker every two to three months and ensure those cells look okay. If they aren’t okay, then put them on the balanced charger. LiPos that sit around idle will slowly drain energy, and eventually, the cells can drain down to an unsafe voltage. That’s why a good old-fashioned storage charge on an idle battery can help bring it back up to a healthy state. 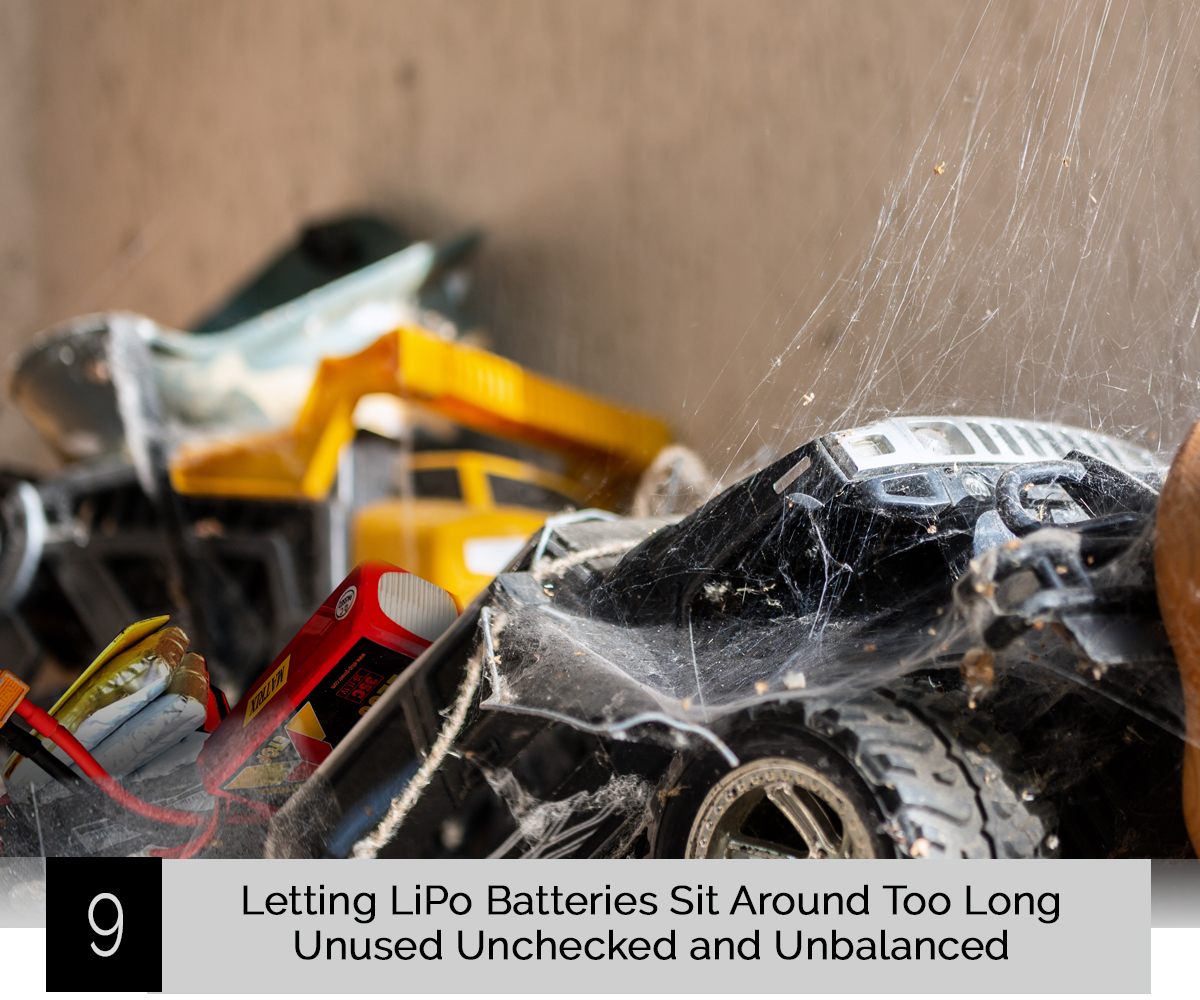 People are always asking, how to destroy a LiPo battery. Perhaps destroy isn’t the best term. LiPo batteries are perfectly safe and acceptable to just toss in your trash and go to your local landfill, but first, the battery must have 100% of its energy drained out before you can throw it away. If that battery still has power, it’s a huge fire risk for your local garbage company that compacts the trash in the garbage truck or at the local landfill. So, before you toss a LiPo in the trash, completely drain it of all of its energy. For more information on how to drain a LiPo battery down to zero, review this LiPo battery manual. 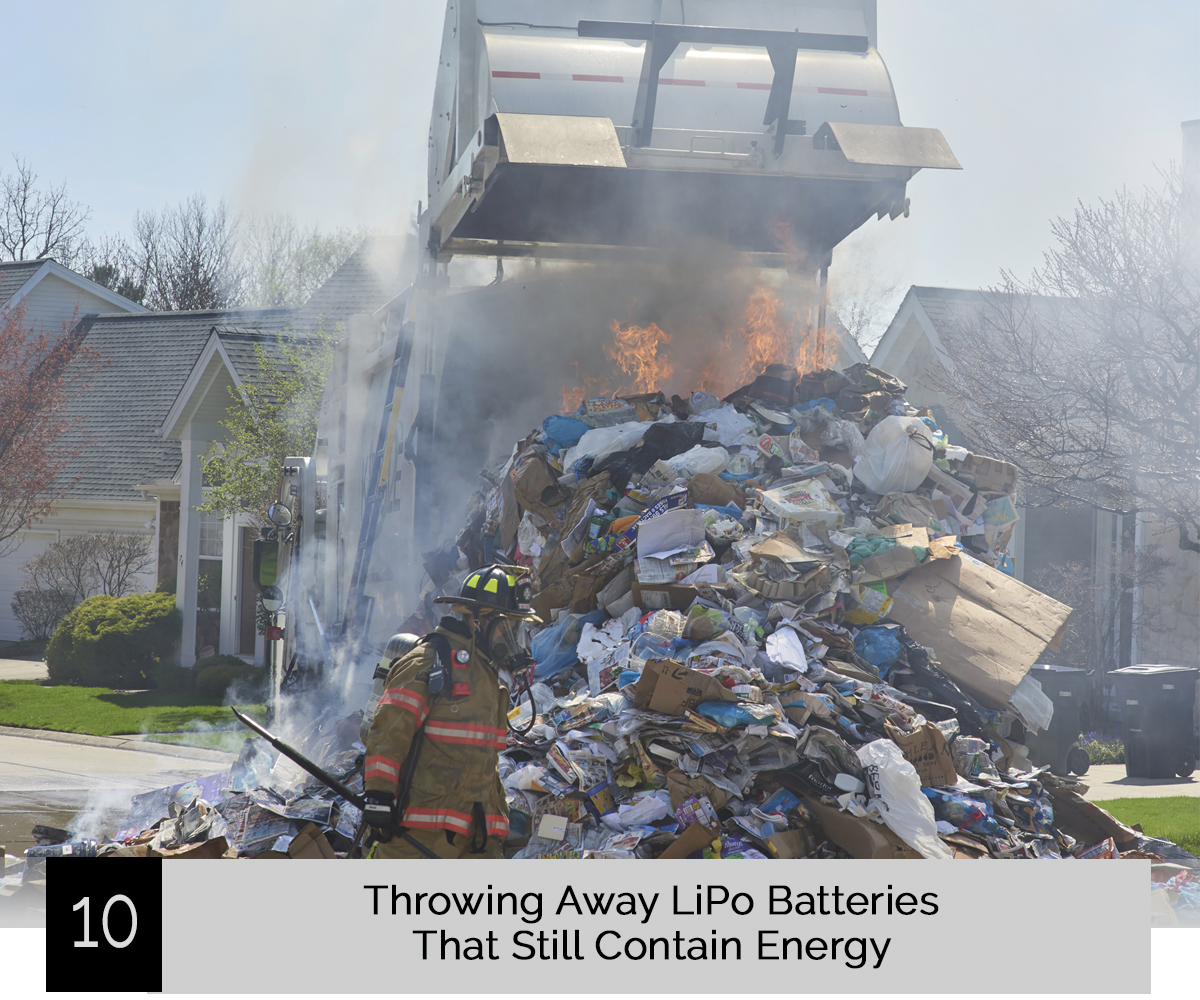 That’s our top ten list of RC LiPo Battery Mistakes and How to Avoid Them. Of course, some of these practices are minor, but you can create a lifetime of happy, healthy, and safe LiPo battery use if you turn them into habits.

10 RC LiPo Mistakes & How to Avoid Them

Watch "10 RC LiPo Mistakes & How to Avoid Them" on our YouTube channel, and while you're there, be sure to check out our vast selection of informative and new product videos. 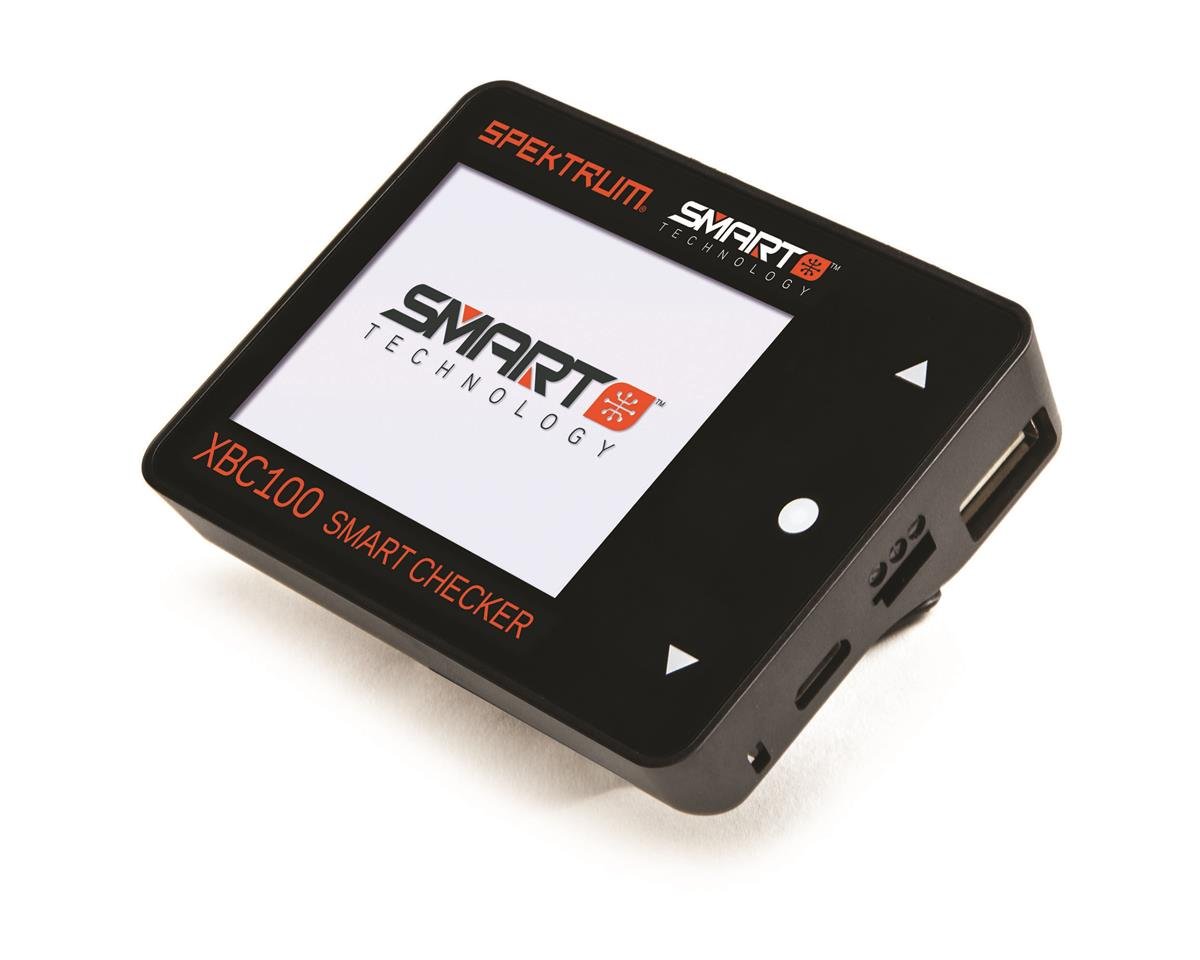 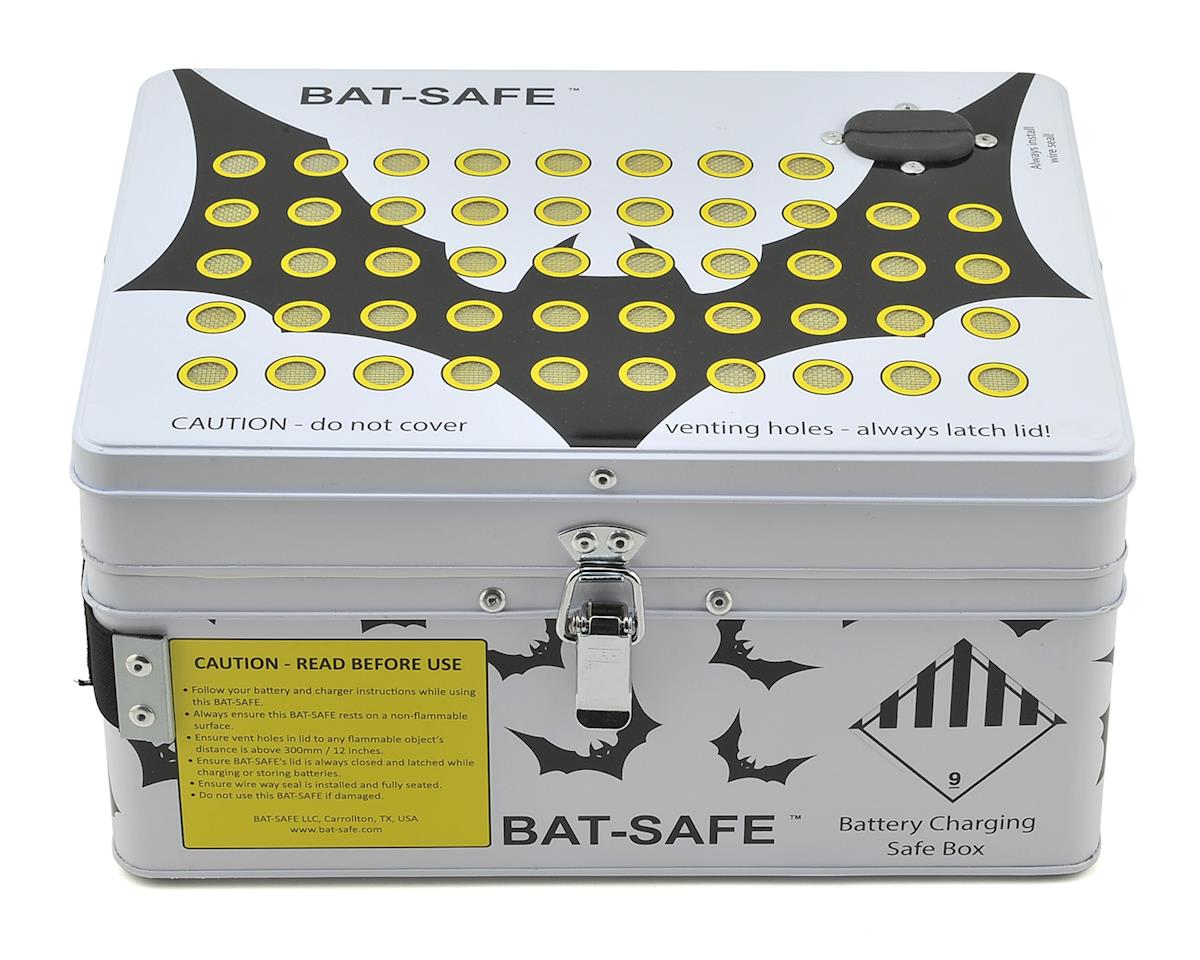 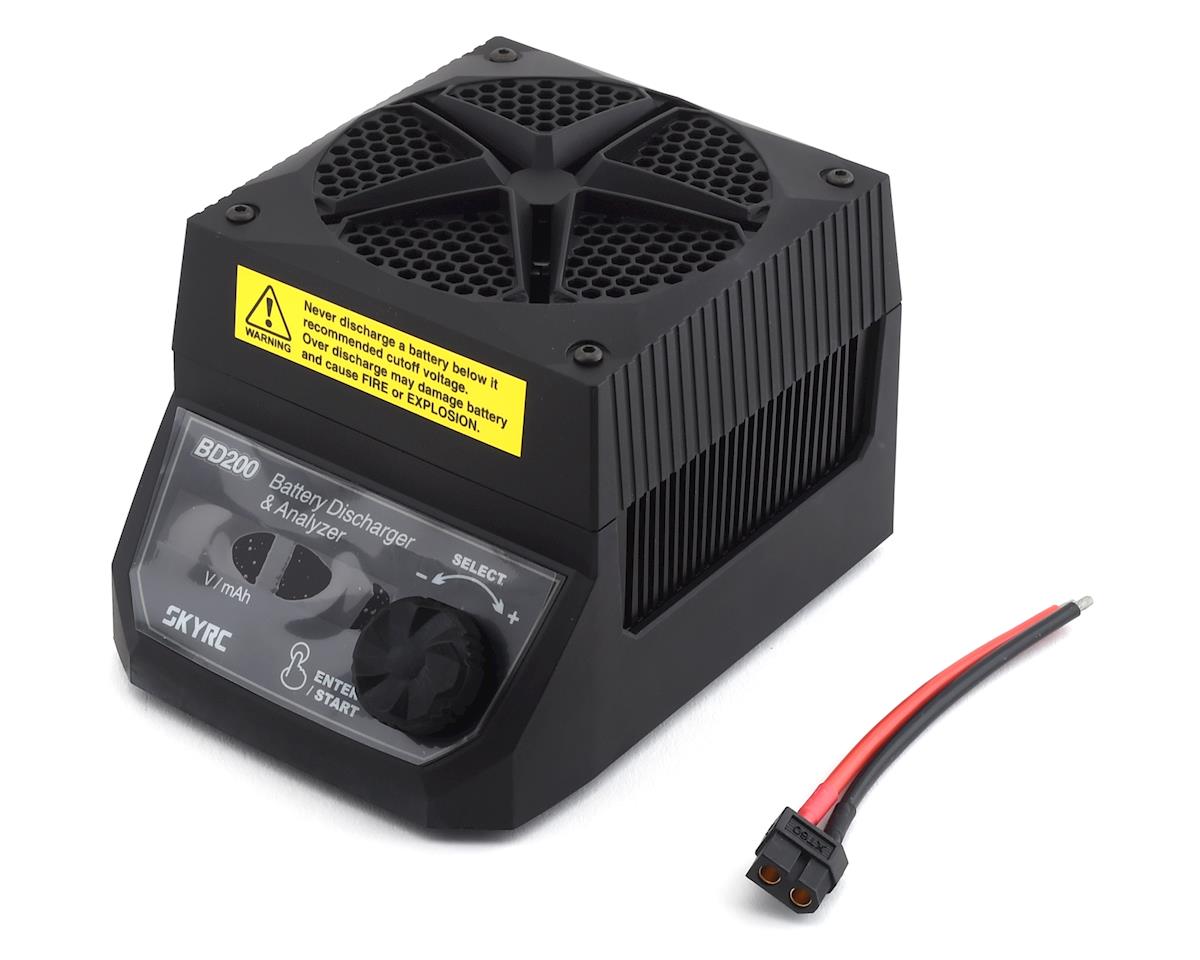 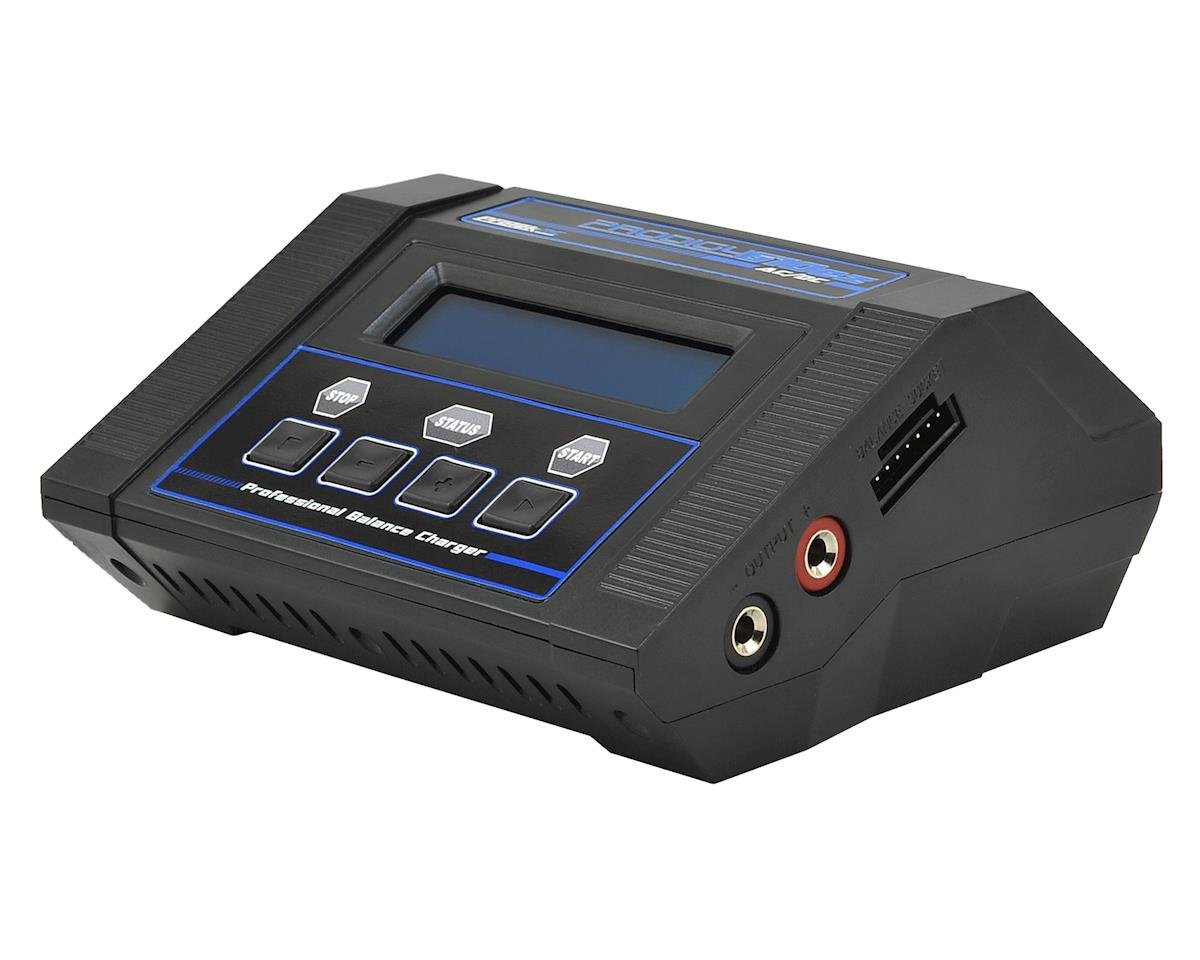