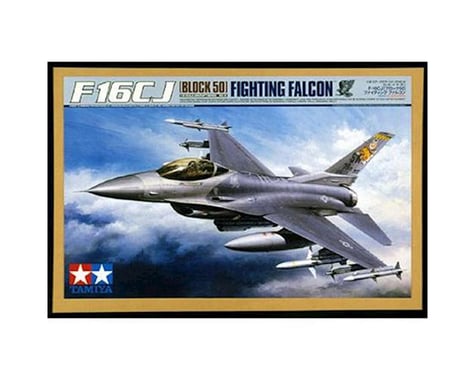 This is a Tamiya 1/32 F16CJ Fighting Falcon, the first ever 1/32 scale F-16 model to replicate the characteristic large air intake duct, nicknamed "Big Mouth". The F110-GE-129 jet engine is also replicated in precise detail, and can slide into place on a hook and rail system exactly like the actual aircraft. The entire engine can also be displayed outside the aircraft using the included cart.

This model achieves a level of accuracy only possible in such a large-scale work. The upper surfaces of the wings are molded to the main body of the plane in one single piece, creating a "Blended Body" which artfully depicts the F-16's beautiful, streamlined form and proportions. The model features screw-mounted main body and die-cast landing gears with actual rubber tires for extra durability.

This model makes use of the mini poly caps to ensure that missiles, ECM pod and external fuel tanks are removable and interchangeable even after assembly. This way, modelers can enjoy depicting different weapon configurations specific to various F-16 missions. Use of poly caps also enables trailing edge flaps, horizontal stabilizer fins and vertical tail fin flaps to move freely after assembly.