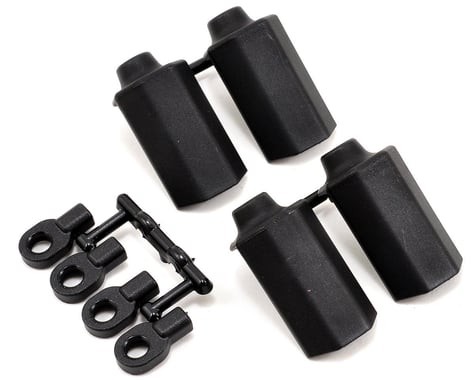 In Stock Online
Usually ships in 24 hours
$1.99 flat rate shipping! Learn More
Add to Cart
Save In List
Read Reviews Write a Review
Check Store Availability
This item earns up to 12 VIP Reward Points Learn More
This is a set of optional RPM Shock Shaft Guards, and are intended for use with Traxxas 1/10 scale vehicles, as well as the Durango DEX, DESC and DEST vehicles equipped with big bore shocks. Rocks, dirt and debris striking shock shafts lead to dents, dings and burrs, which in turn, leads to torn shock seals. Torn shock seals means leaky shocks and poor shock performance. RPM Shock Shaft Guards shield the shock shaft from those deteriorating elements, prolonging the life of the shock shaft, which improves the long-term performance of the suspension and in turn, prolongs the time between shock rebuilds!

RPM Shock Shaft Guards are a simple design, that replaces your stock shock spring cup with one that has a thin but tough shield rising up to the base of the shock body, completely blocking debris from striking the shock shaft. The back and sides are open, which prevents debris from building inside the guard as well. The kit includes replacement oversized shock rod ends, improving durability and consistency of the shock pivot ball. Additionally, RPM redesigned the top of the rod end so it is square. That square end keys into the shock shaft guard for directional control. The front shield of the guard covers over 100 degrees of frontal exposure! RPM Shock Shaft Guards are zero friction protection devices, meaning the guard never touches the working elements of the shock.

RPM Shock Shaft Guards are sold in sets of four, including four rod ends for the shocks and are stock replacement items. Nothing more is needed for installation and they are available in Black, Blue and Dyeable White materials.

NOTE: RPM Shock Shaft Guards fit all Traxxas 1/10th scale molded shocks as well as Traxxas Big Bore shocks but will not fit the Traxxas Jato. They fit the T-Maxx and E-Maxx but will not work with RPM T/E-Maxx A-arms due to clearance limitations on the upper arm. Additionally, these are only compatible with Durango vehicles equipped with Big Bore shocks.

This product was added to our catalog on September 21, 2011

Gavin C
Verified Owner
RPM Shock Shaft Guards (Black) (4)
After reading one of the other reviews, I too bought these for my Proline Powerstroke shocks on my Traxxas 4x4 and they fit perfectly, awesome
1 customer found this review helpful.
William Thompson
Verified Owner
RPM Shock Shaft Guards (Black) (4)
These say they will fit the Traxxas big bore shocks, I bought them for my ultimate and went to install and they don't work at all. Maybe I'm missing something but the springs were to large to even sit on the guards..
1 customer found this review helpful.
Anonymous
RPM Shock Shaft Guards (Black) (4)
Pretty cool product. Have these installed on Pro-Line Powerstrokes on a Slash 4x4 MT Conversion. RPM's shock ends don't fit the Powerstroke shafts, so I just used the guards with the shock ends that came with the shocks. Can't lock them in place so they don't spin, but haven't had one slip on me yet because the fit is perfect. Nice.
1 customer found this review helpful.
View all reviews (3)
Related Products
Customers also purchased...