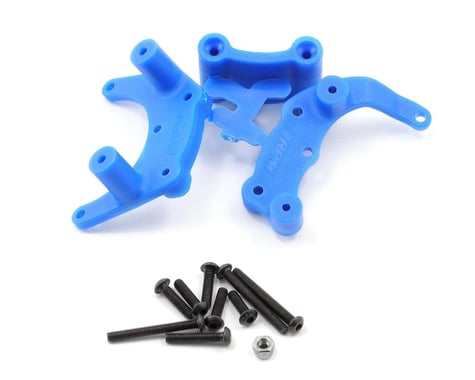 This is a rear bumper mount from RPM, intended for use with the Traxxas Slash, Stampede, Rustler or Bandit 1/10 electric vehicles. After hearing numerous requests to look into the rear bumper mount on the Traxxas Slash, RPM has found several issues that could use their special touch. Those same problems were encountered on e-Rustler, e-Stampede & Bandit vehicles using the stock wheelie bar mount. The problem – the stock mount uses only a single screw on the gear cover side to hold the mount in place. That causes a hinge effect under rear impacts causing the slotted area holding on to the rear skid plate to pop off after an impact, leaving the stock bumper/ wheelie bar mount hanging under the chassis. The RPM solution…An all-new bumper mounting system that eliminates all of the problems encountered with the stock version.

The RPM rear bumper/wheelie bar mount fits a wide range of vehicles too. It fits all versions of the Traxxas Slash, electric Stampede, electric Rustler and Bandit including VXL, XL-5 and legacy versions. The RPM rear bumper/wheelie bar mount is molded in RPM's nearly indestructible blend of nylons and is sold in either blue or black. Each mount comes with all necessary hardware, complete instructions for ease of installation and an industry-leading warranty to back it all up!

gene z.
Verified Owner
RPM Bumper Mount (Blue) (Rustler,Stampede,Bandit,Slash)
Great upgrade over the stock traxxas mount. Screw holes all don't immediately line up but once everything is in place it pulls together straight and tight.
View all reviews (1)
Related Products
Customers that bought this also purchased...
Previous Next Move Close