The updated Traxxas Maxx is here, and it’s bigger, more aggressive, and ready to bash. We review the truck, see how fast it goes, and then get it a little muddy. So how good is the new WideMaxx? Well, let us show you. 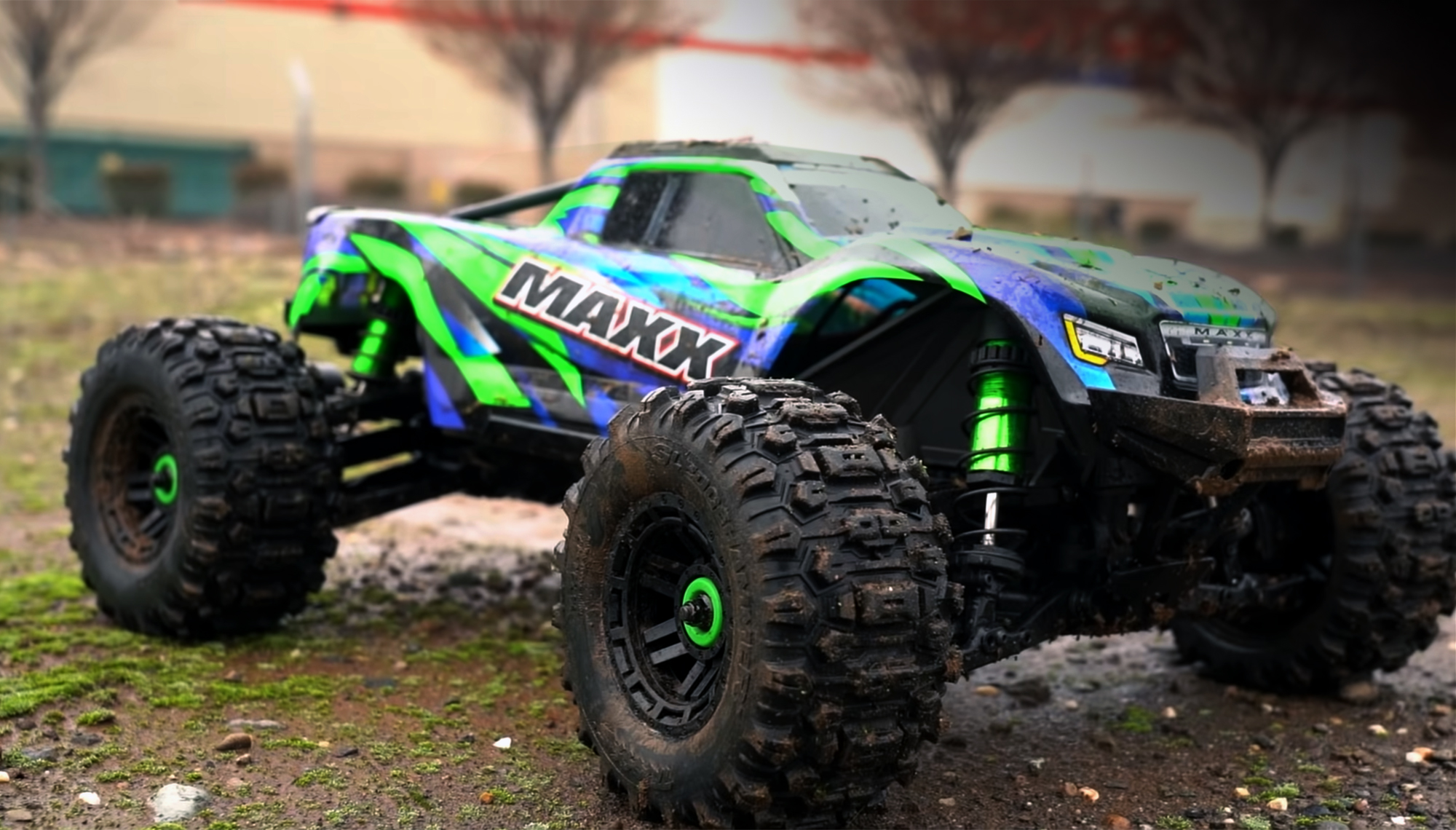 It’s no secret the Traxxas Maxx WideMaxx is a high-performance electric 4X4 monster truck that comes waterproof, brushless, 4S LiPo compatible, and with a 60MPH speed rating. On top of that, the drivetrain in the truck is spec’d for 6S power from the factory. The Maxx is one serious truck intended for serious enthusiasts, and it just got even better.

Which is better the new Traxxas Maxx WideMaxx or the original Maxx with WideMaxx upgrade kit?

So, what is so cool about the WideMaxx? You can take the upgrade kit to an older Maxx, and you have a WideMaxx, right? Yeah, absolutely—but the WideMaxx and the WideMaxx kit are not the same, and it’s because of the chassis. 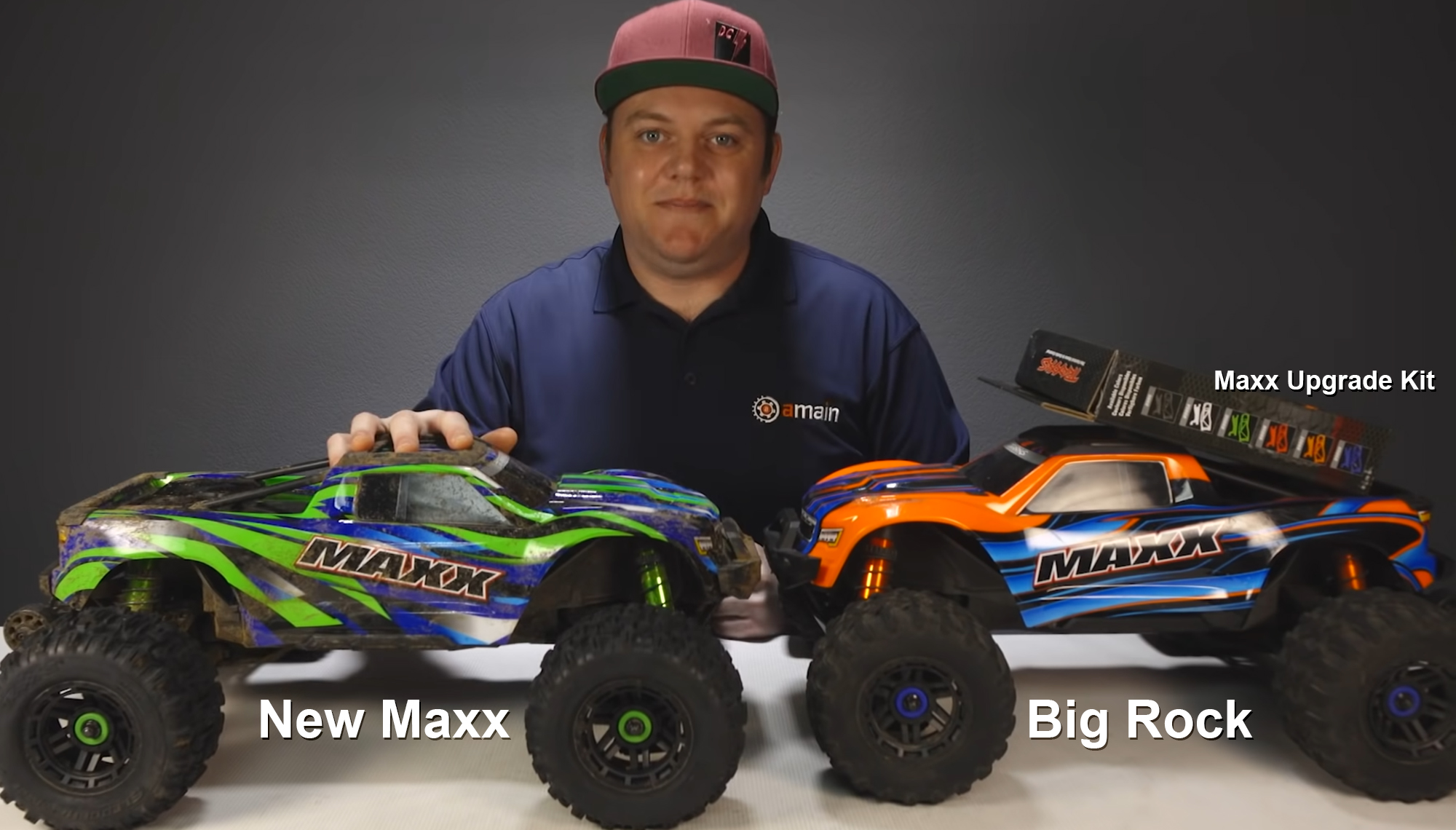 On the surface, the main emphasis of this new truck is all about the WideMaxx accessory kit, being included as standard equipment, which was a $50 upgrade before. And it’s worth noting: the standalone WideMaxx upgrade kit is available in 6 different colors, but you’ll only find it in black on the new Maxx trucks.

Below we show the new Maxx head-to-head with the old Maxx. Note, the new truck is about 1.5 inches wider, making for a more stable stance and better cornering performance.

Next we compare the new Maxx to another truck in this category, the 4S BLX Kraton.* The Maxx is about a half-inch wider, but you can’t tell because of the big offset tires on the Kraton. So, we popped those tires off, and sure enough, the Maxx is about a quarter-inch wider.

On the right is the new Maxx with a Arrma 3S Big Rock, which is not quite the same category, but to give you an idea of the size difference, the Maxx is quite a bit wider. 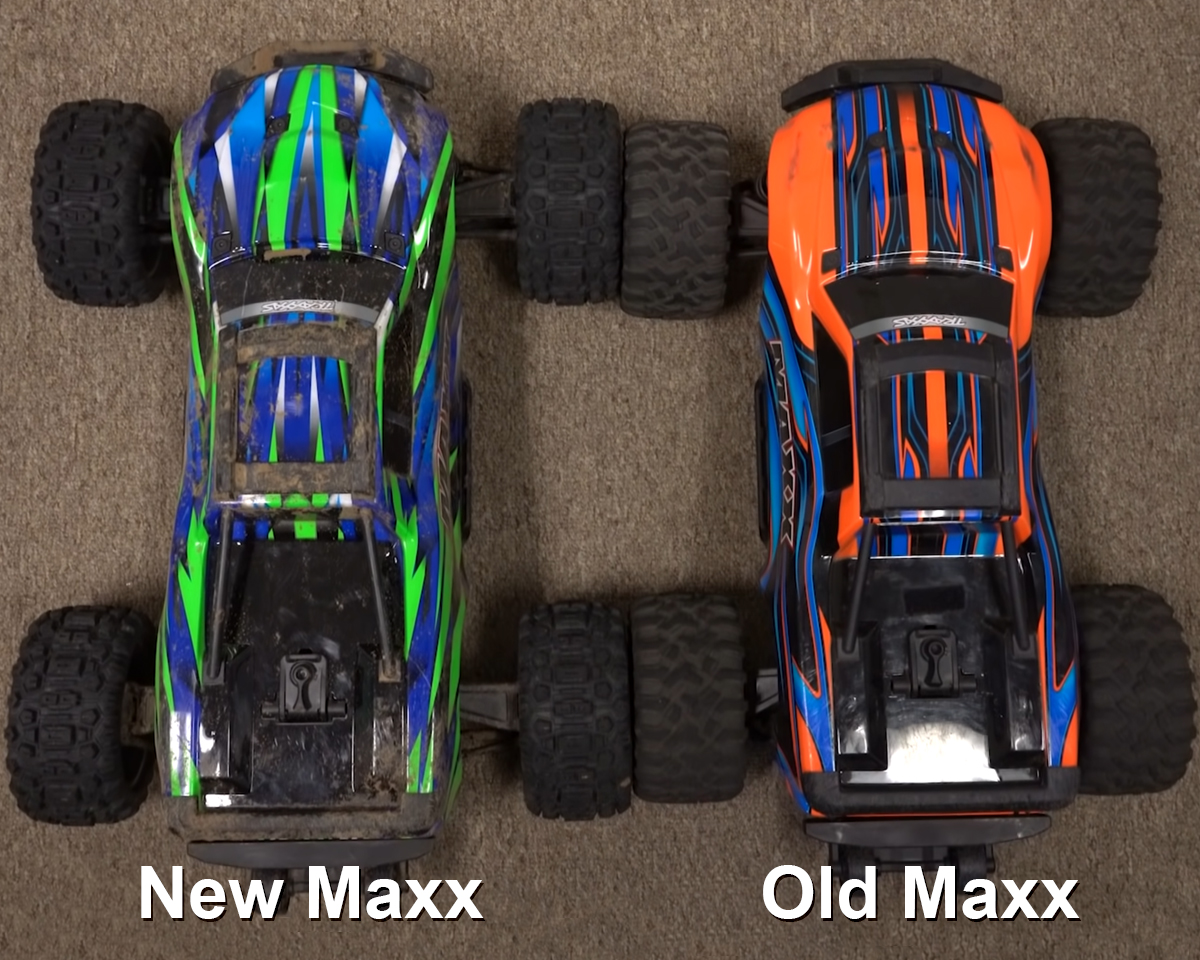 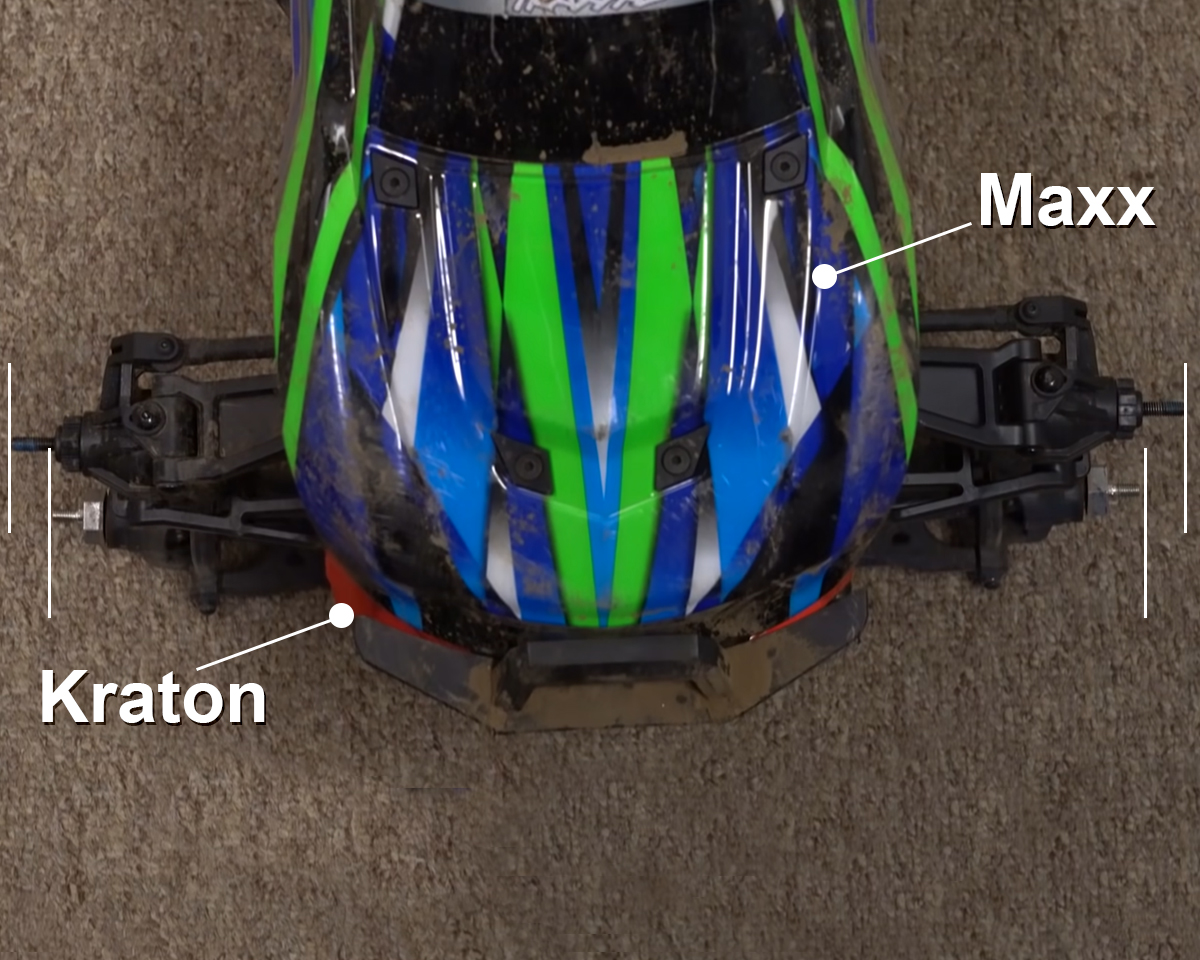 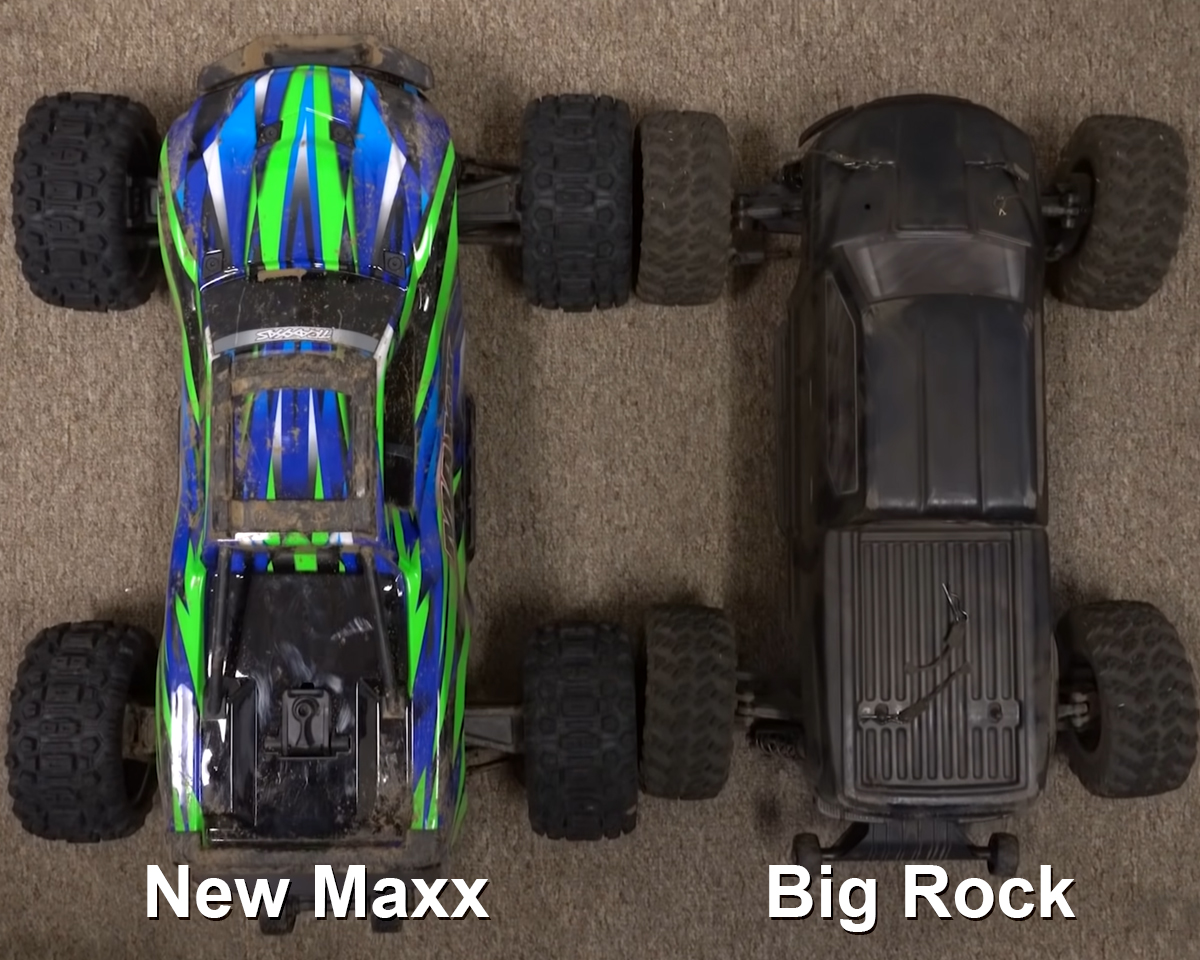 Of all the updates on this new Maxx truck, perhaps the most significant is not the use of the WideMaxx kit. One of the coolest features is the new longer chassis. Stretching this truck almost an inch longer than the old, which effectively increases the wheelbase by about 7%. 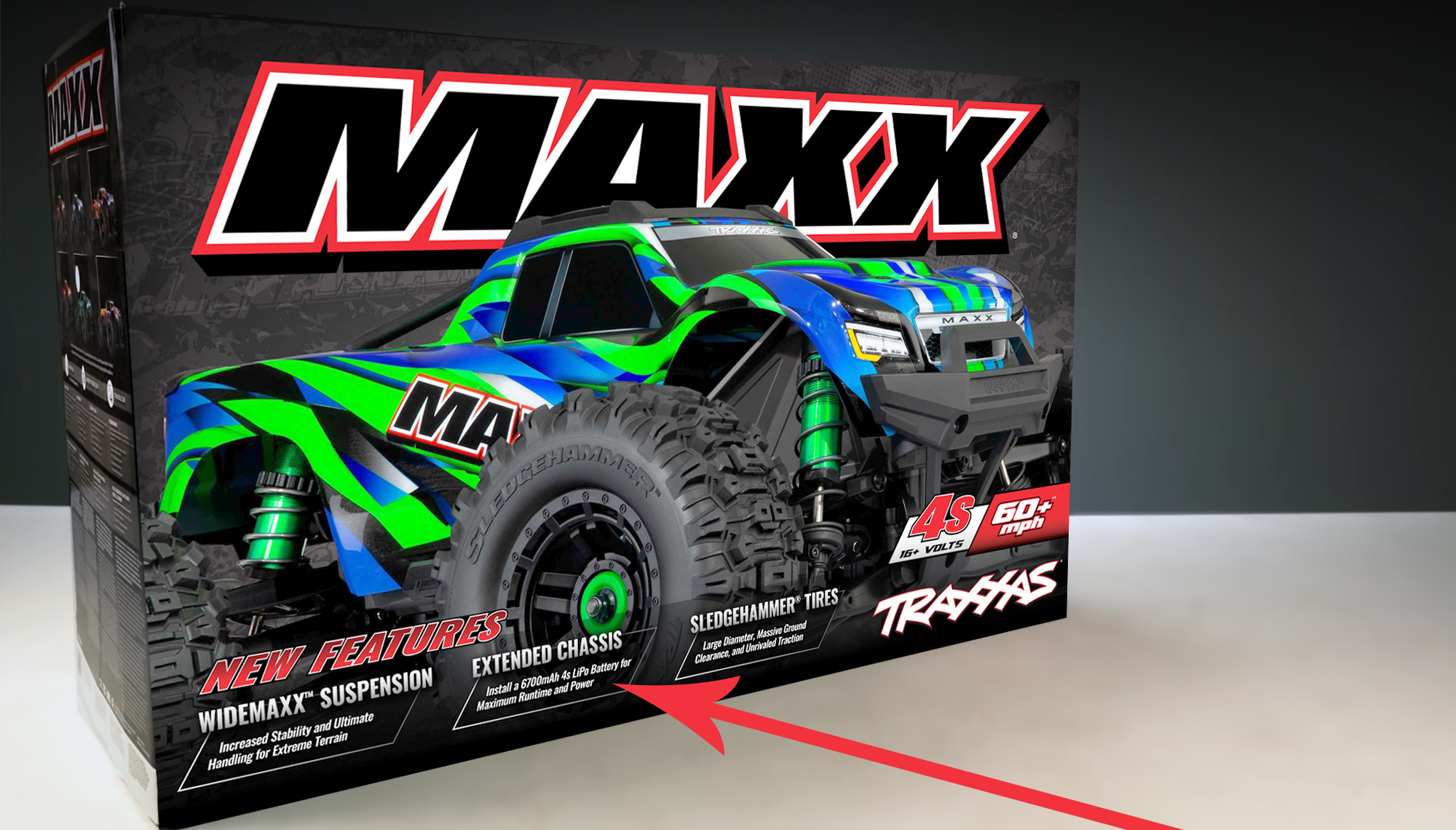 There are pros and cons to a longer chassis. They are better for straight-line stability. They are a little more forgiving in really rough terrain, and they help keep the front tires down if you’re popping a lot of wheelies—the original Maxx was guilty of that. The truck would pop wheelies all of the time, whether you wanted it to or not. So, for heavy-footed drivers who like to drive as strapped as possible, this is an excellent update.

There are a few implications with having a longer chassis. For one, a new longer body is needed to fit correctly. The body is identical to the original and retains the skid plates, clip-less body fastening, and structural tubing, but the tubing is now longer. Because of the length differences, the old Maxx body and the new Maxx body are not cross-compatible.

Other long chassis upgrades include a new longer center driveshaft. It’s still aluminum, just a little longer. To keep things clear Traxxas identifies the longer parts by saying they fit the Maxx with the extended chassis. 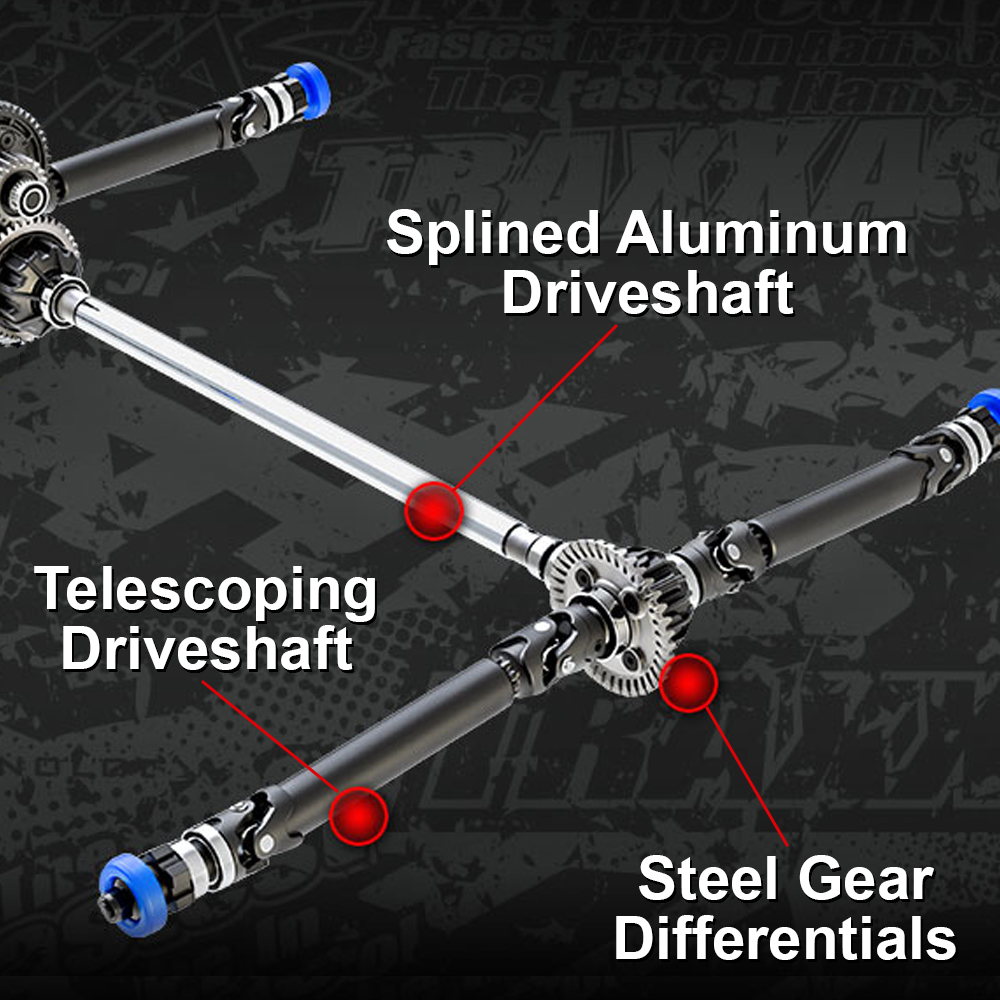 There is also a bigger and longer battery box to be compatible with a wider range of batteries, including the flagship 6700mah 4S Traxxas LiPo. This battery was initially designed for the big X-Maxx, and it can now be shared between trucks.

Last but not least is one more important update, and it’s the new tires that come as standard equipment on the Maxx and they are the Sledgehammer tires. These moto’esque tires have an open block tread, work well in loose conditions, and are hooked up equally well in the street. The tires are TSM rated like before, but they aren’t directional, just bigger. Tire venting is done on the wheel, not the rubber, so the vent holes need to be covered up with tape when driving in wet or dusty conditions to keep water and grit out.

The wheels use a 17mm hex with an axle hole insert, and just about any other 17mm sized tires and wheels will fit; like these belted on-road tires from Sweep Racing, called the Road Crusher.

Here are the 3.8” Pro-Line Badlands, and they’re just slightly taller than the Traxxas Sledgehammers, but they fit. 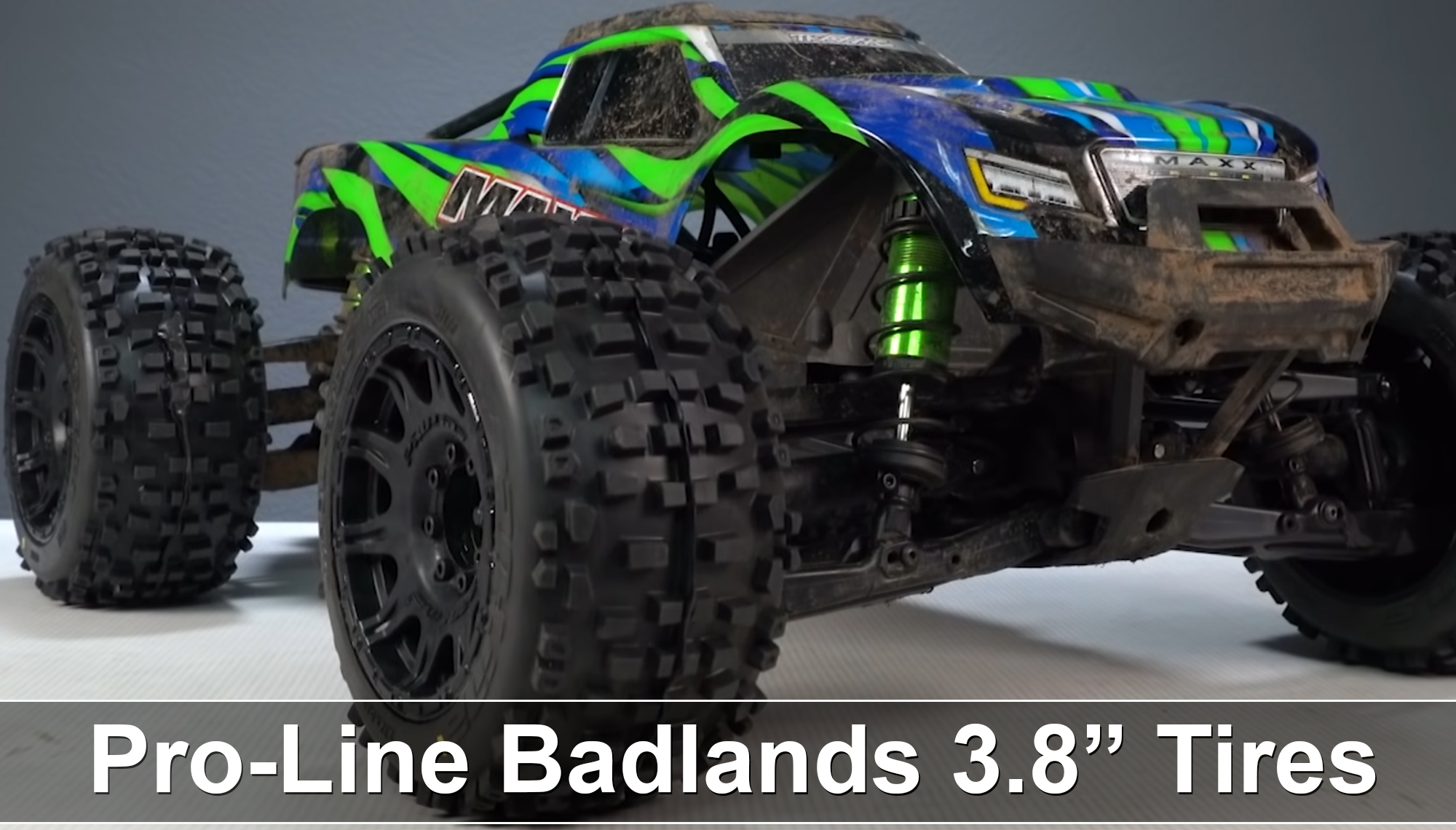 And lastly, here is one of our favorite tire combos for the Maxx, and they’re the UDR tires and wheels, but they look a little small compared to the Sledgehammers.

Now the Sledgehammer tires are taller than the original tires, and taller tires act like gearing up on the transmission, especially when they start ballooning. So, to compensate for this, the new Maxx comes with one tooth smaller pinion gear, so it’s a 23T instead of the previous 24T. Speed runs don’t seem to be affected, though. 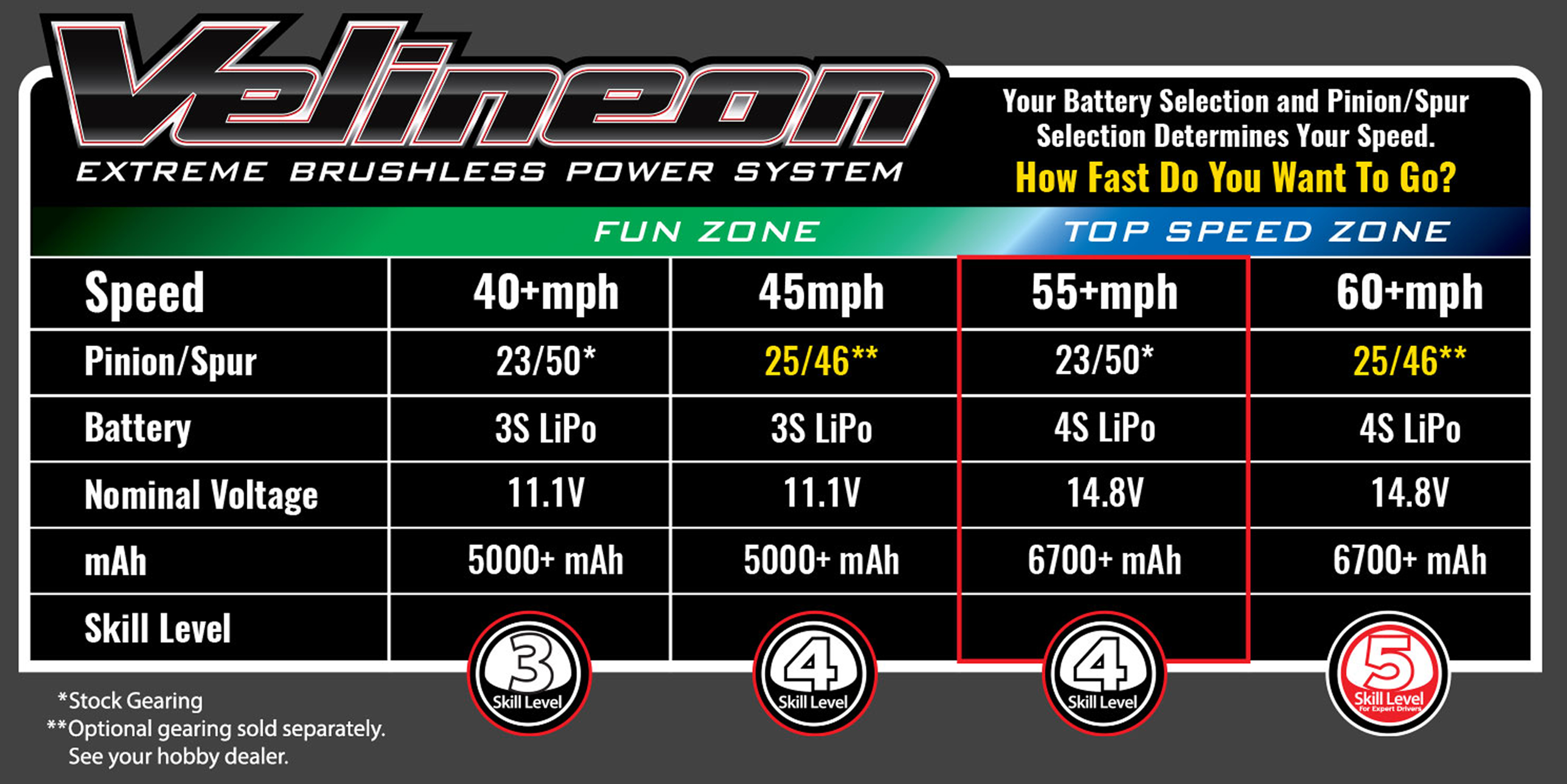 We set out to test top speed with our GPS speed meter and a fully charged 4S battery, and after a few passes, we realized a 52MPH top speed on the out-of-the-box gearing. Of course, to reach the 60MPH top speed, the Maxx will need the gearing changed for both the spur and pinion gear, as seen on this speed rating chart, which we are not going to do because we’d have to change it right back after to bash properly without overheating the truck. 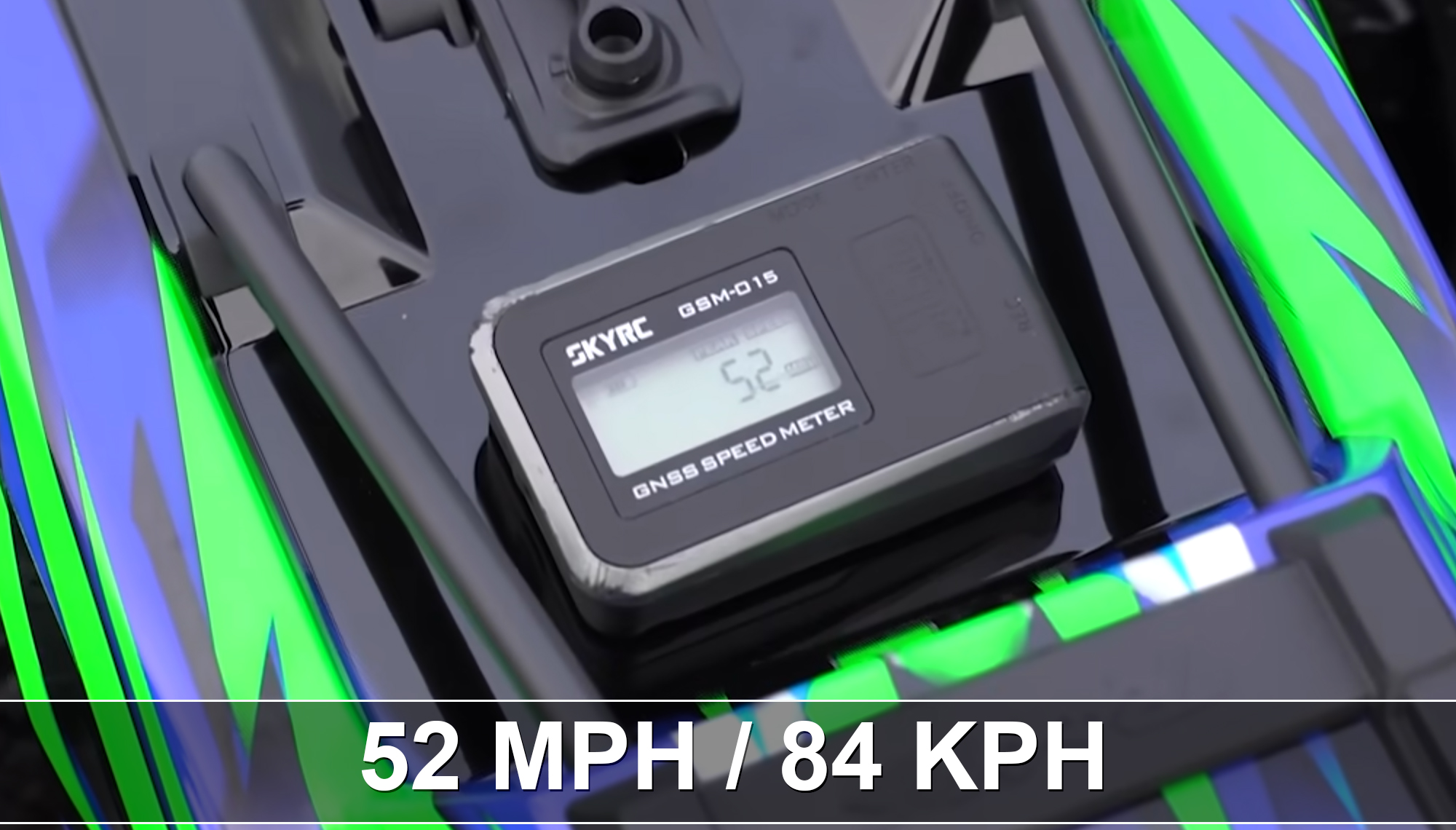 After that speed run, we had our first chance to bash around the truck and bash we did. Be sure to watch our WideMaxx review video for more fun and excitement.

Traxxas Maxx 2.0 WideMaxx Monster Truck Review on the AMain Hobbies YouTube channel. While you're there, be sure to check out our vast selection of informative and new product videos. 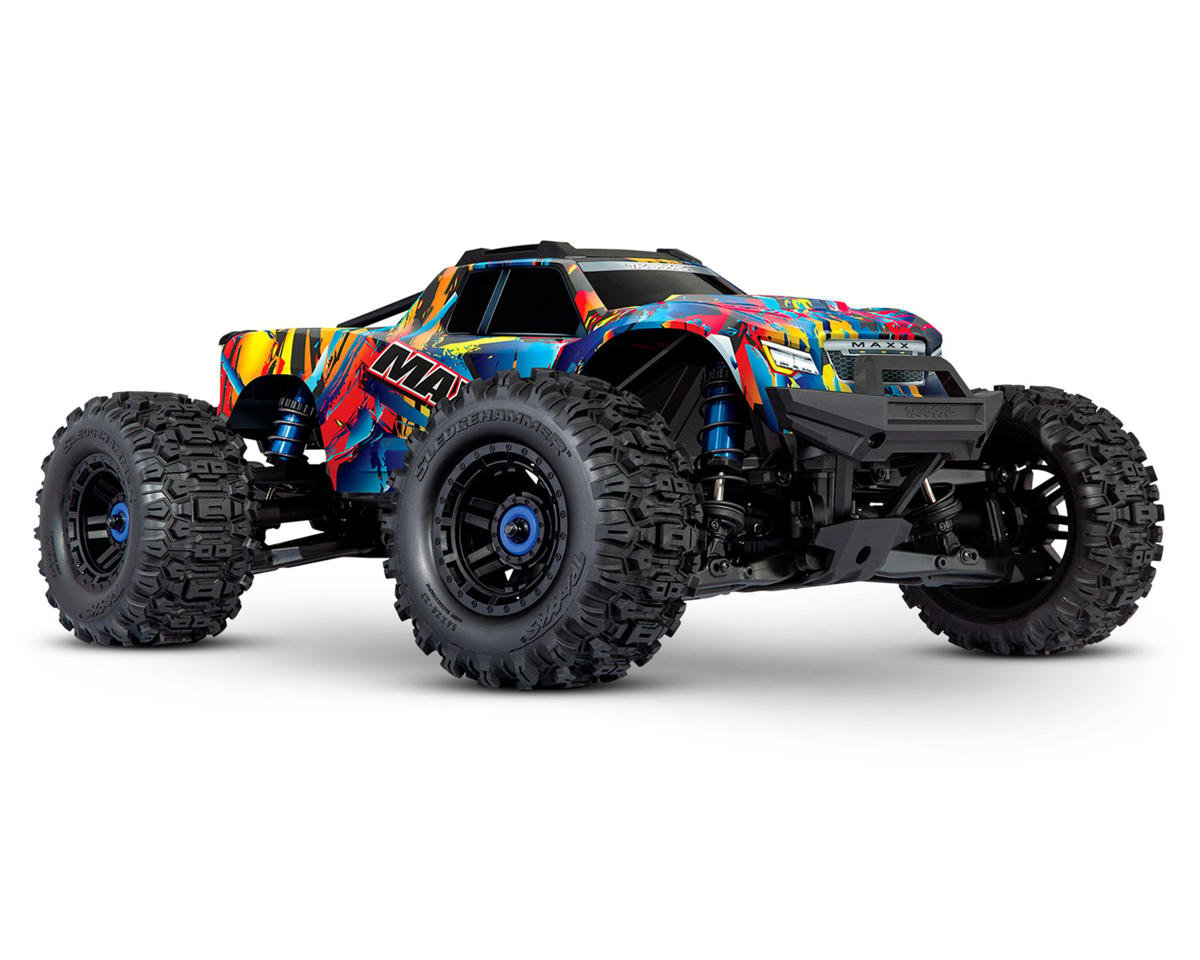 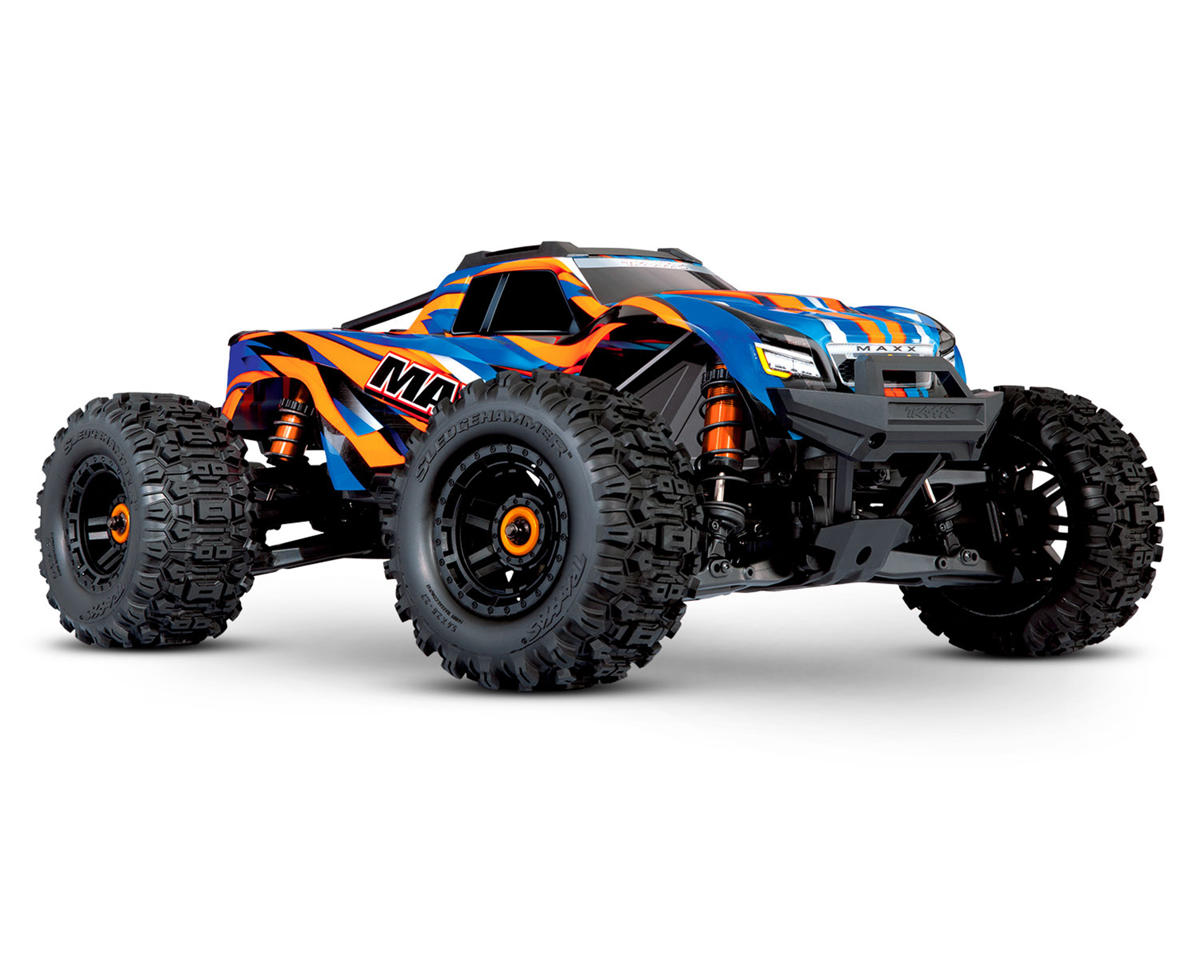 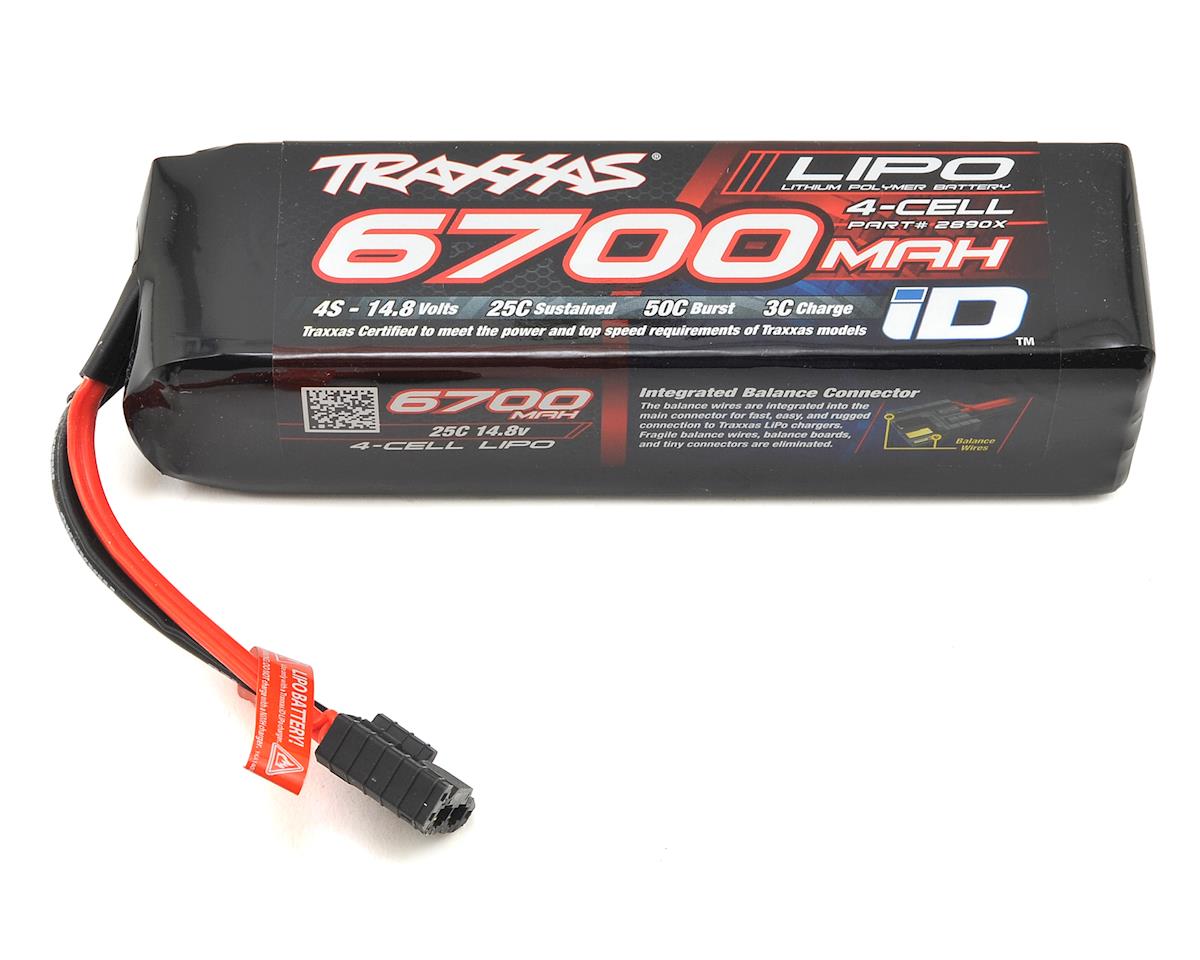 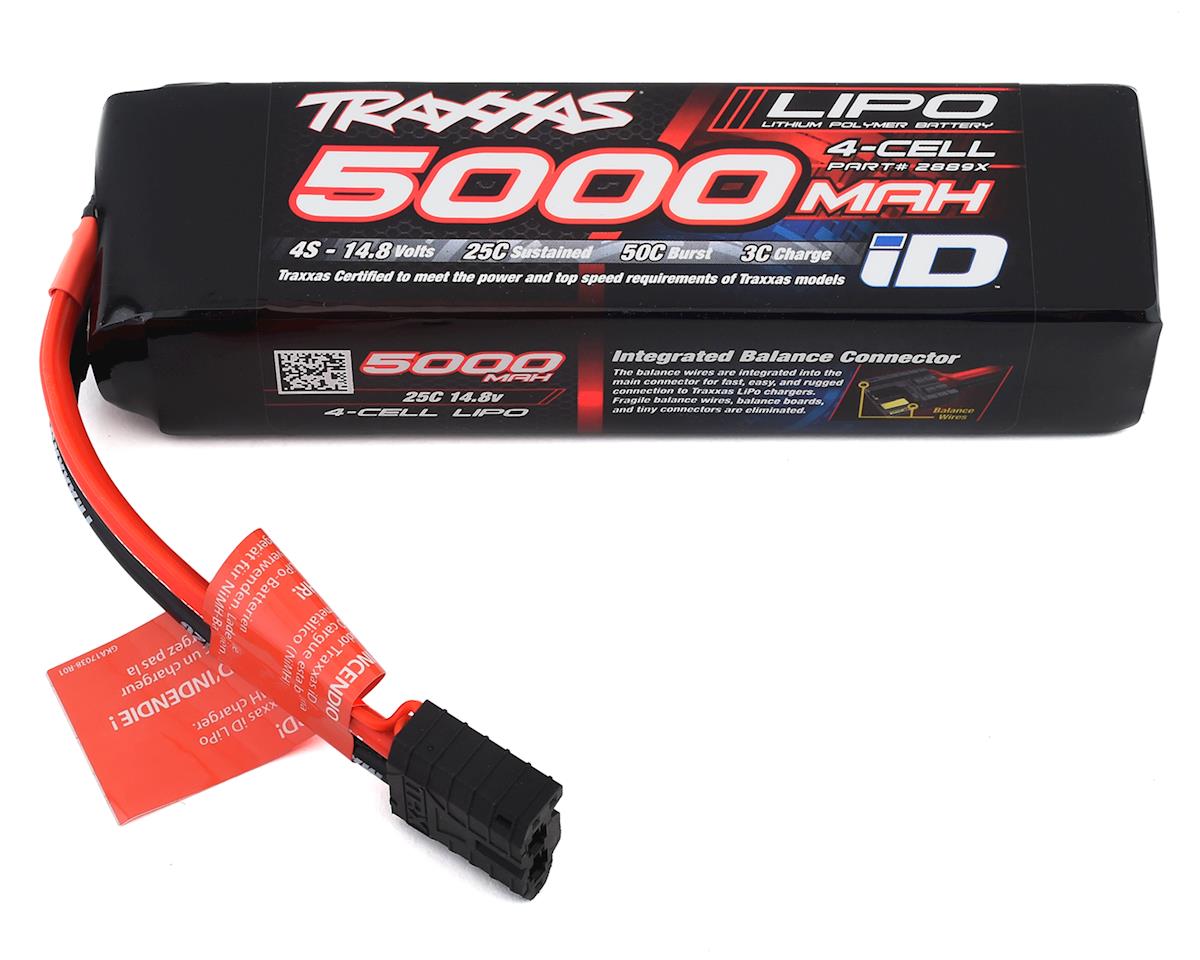 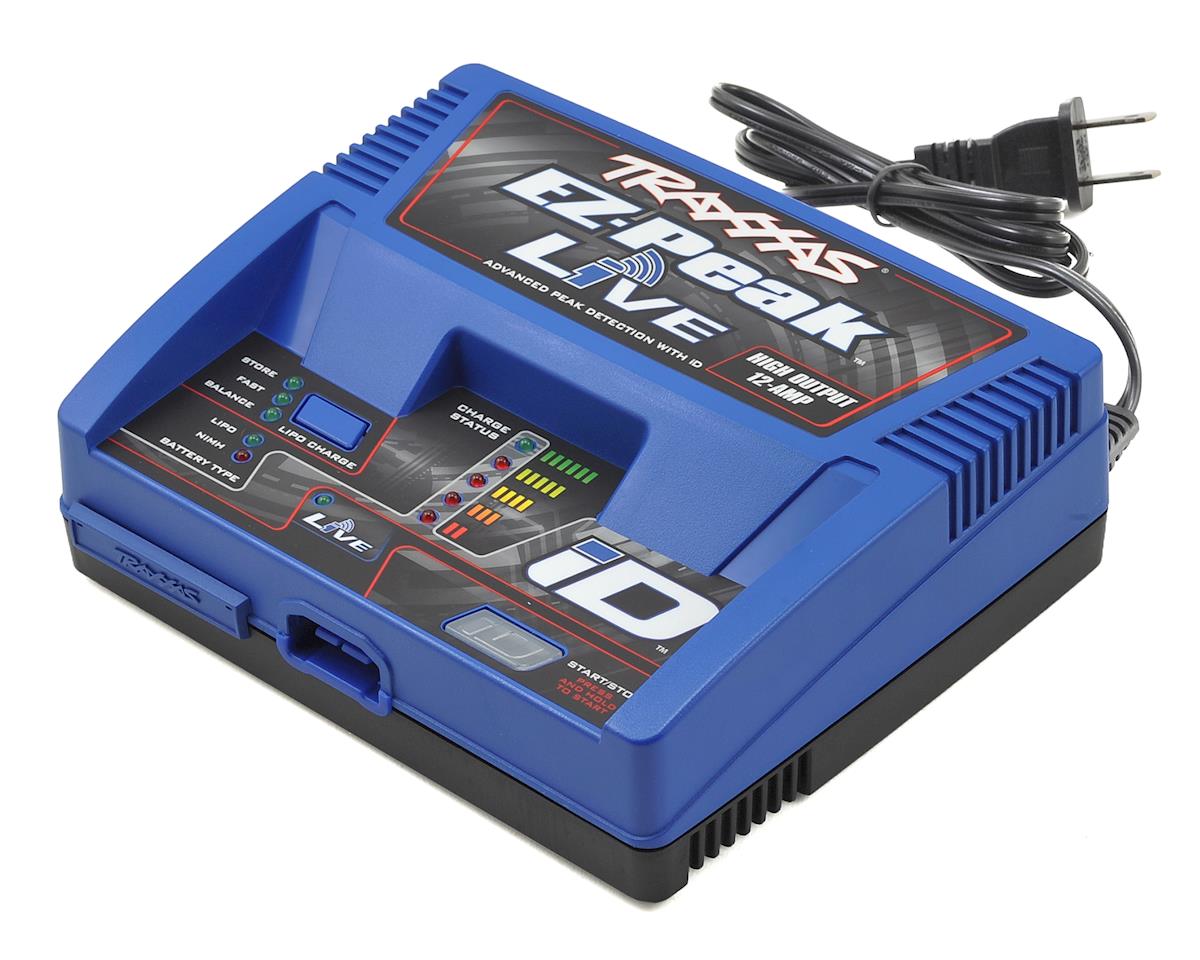 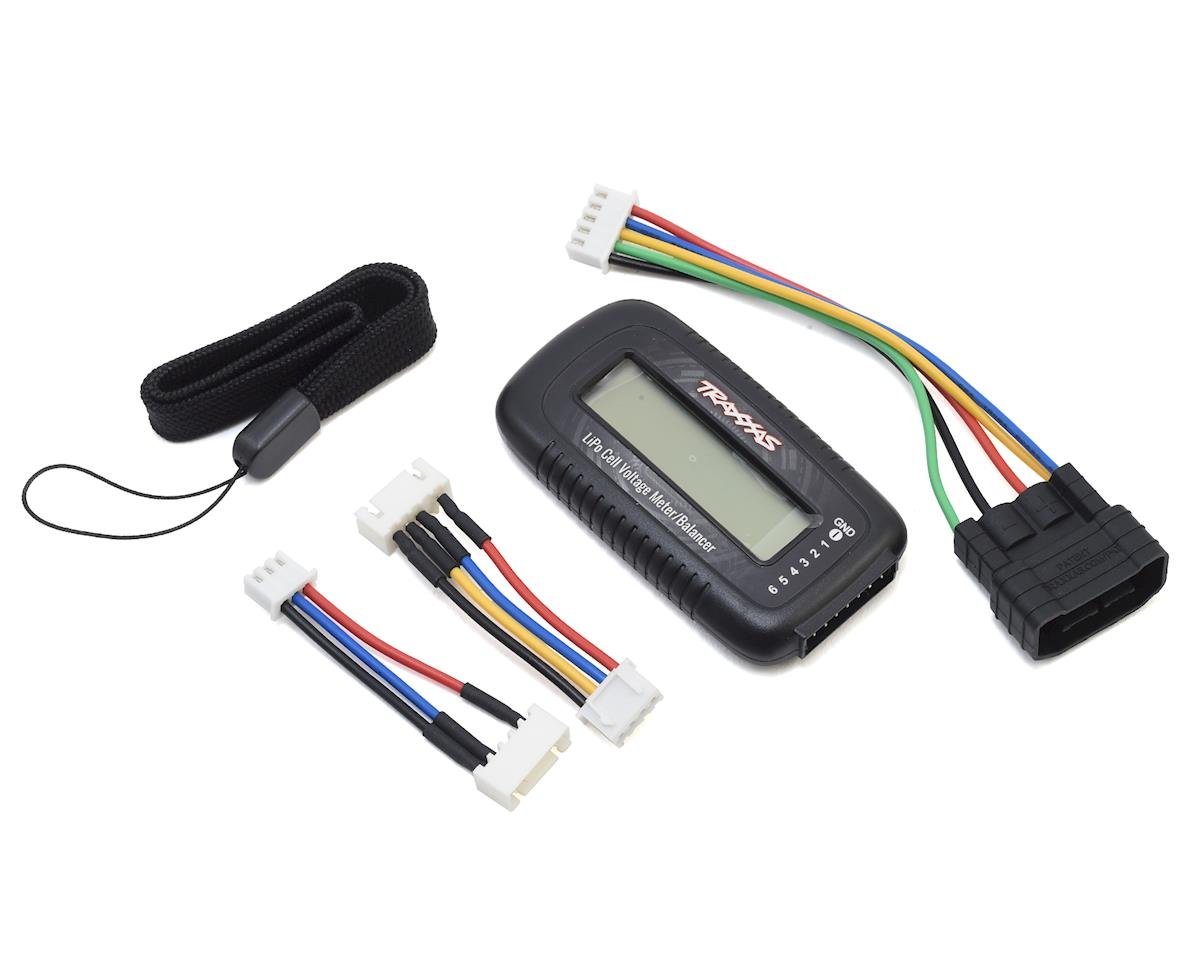