The days when radio-control helicopters were complex, expensive machines reserved for expert pilots only are long gone. Today, anyone can get started in RC heli’s and become a proficient flyer with an affordable, ready-to-fly model and a little practice. Understanding helicopter flight controls and terminology before you start flying will help you become a pro pilot more quickly and easily. So let’s get started.

Hey, that’s not a helicopter! Since helicopters use the same control terminology as airplanes, it’s beneficial to understand an RC plane's control surfaces and what they do before moving to helicopters. Click here for the full article. 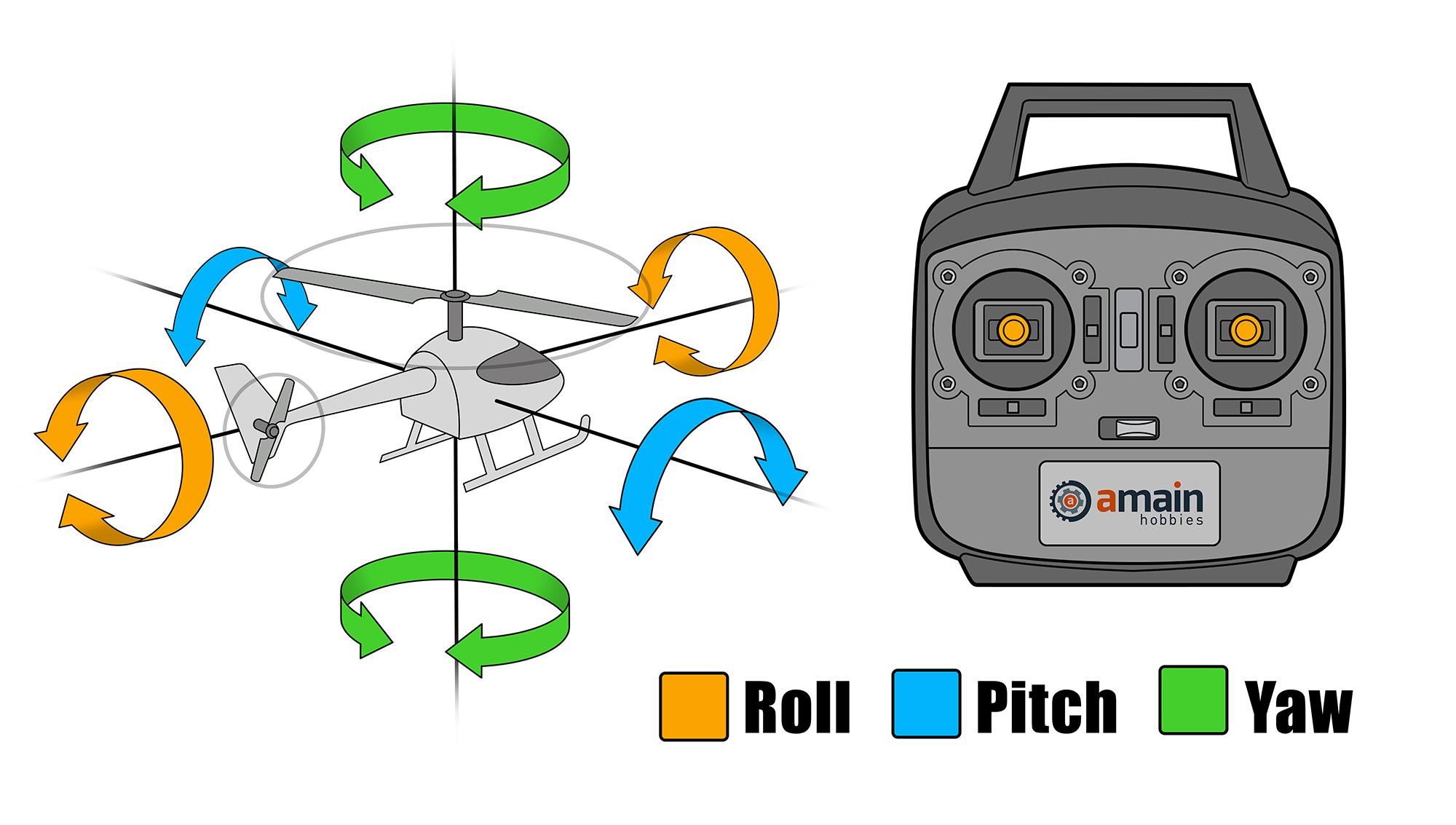 CAUTION: Helicopter control configurations may vary. Be certain to consult your helicopter’s manual and make sure you understand the specific controls for your model before flying.

As you fly a plane or helicopter, you’ll control its position in the air along three axes:

As this animation shows, each axis is assigned to a direction on the left or right stick.

Although RC helicopters use the same flight-control names as RC planes, they don’t have the same physical control surfaces. Instead, a helicopter changes the pitch of its rotor blades and the speed or pitch of its tail rotor to control roll, pitch, and yaw. So let’s take a closer look at how it works.

The angle (pitch) of the helicopter’s rotor blades changes to vary the thrust of each blade and control the heli’s flight attitude and direction. The swashplate achieves this. As the rotor head swings the blades through a 360 degrees rotation, the swash plate causes each blade’s pitch to change depending on its position within the disc formed by the spinning rotor blades (which we’ll call the rotor disc).

Let’s imagine our helicopter is hovering. Both rotor blades have the same pitch no matter where they are on the rotor disc, producing equal thrust and the model flies level. However, if we push the right stick up to make the helicopter pitch down, the swash plate will tilt down toward the nose of the helicopter. Now, as each blade swings across the front of the rotor disc, its pitch will decrease, resulting in less thrust. Conversely, as the blade swings through the rear of the rotor disc, its pitch will increase, producing more thrust. This causes the heli to pitch forward. The same principle applies to making the heli roll left and right—the swashplate tilts as you move the stick left and right, causing the rotor blades’ pitch to change, resulting in a difference in the thrust that rolls the helicopter.

A helicopter uses its tail rotor to control yaw. As the heli spins the rotor blades clockwise, the torque applied by the motor also tries to spin the helicopter’s body counter-clockwise. The thrust of the tail rotor prevents this unwanted spinning. If the thrust equals the torque effect, the heli body will stay still—no yaw movement. If the tail rotor’s thrust is stronger than the torque effect, the heli will yaw clockwise. And if the thrust is weaker than the spinning force, the heli will yaw counter-clockwise. 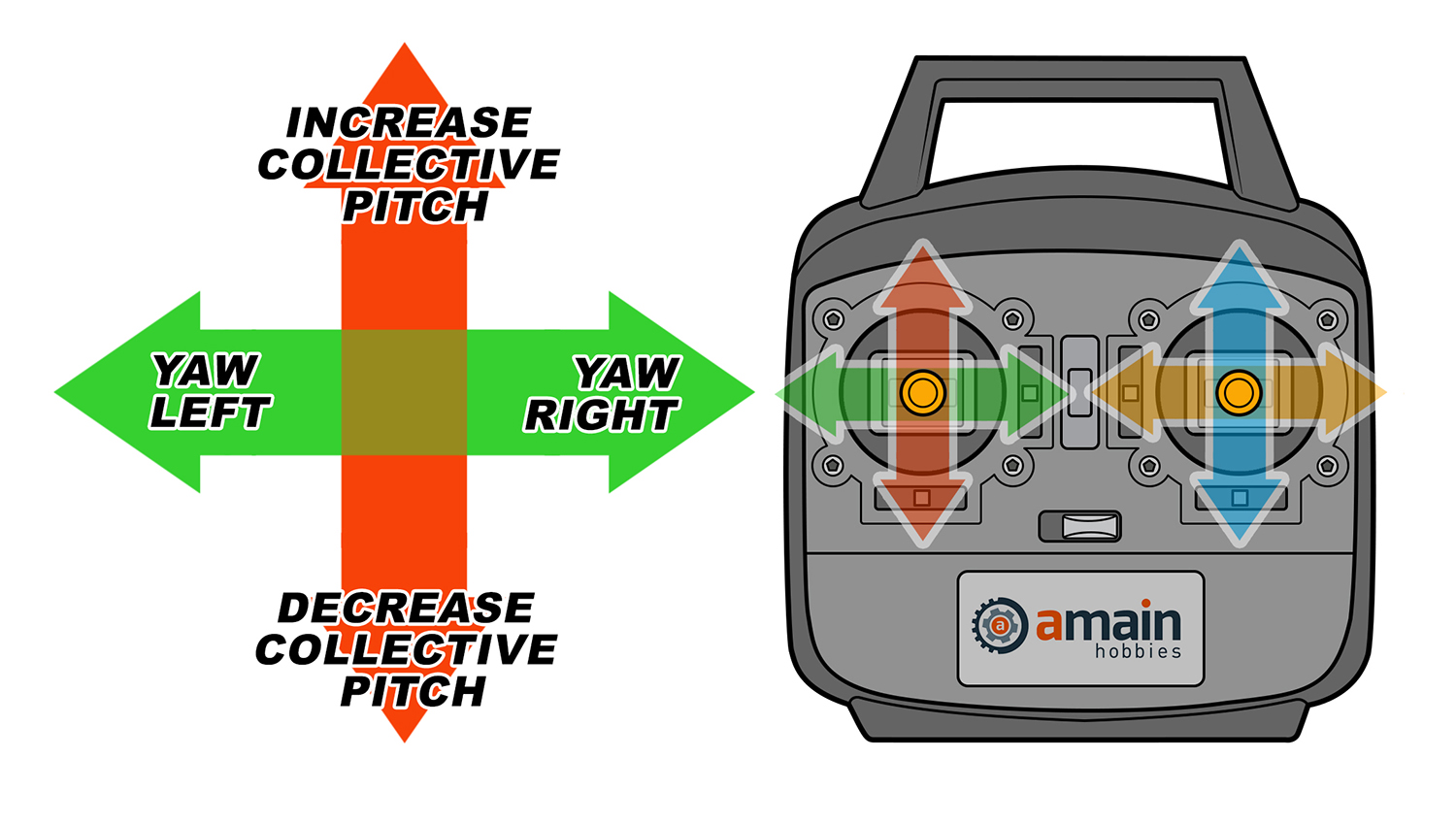 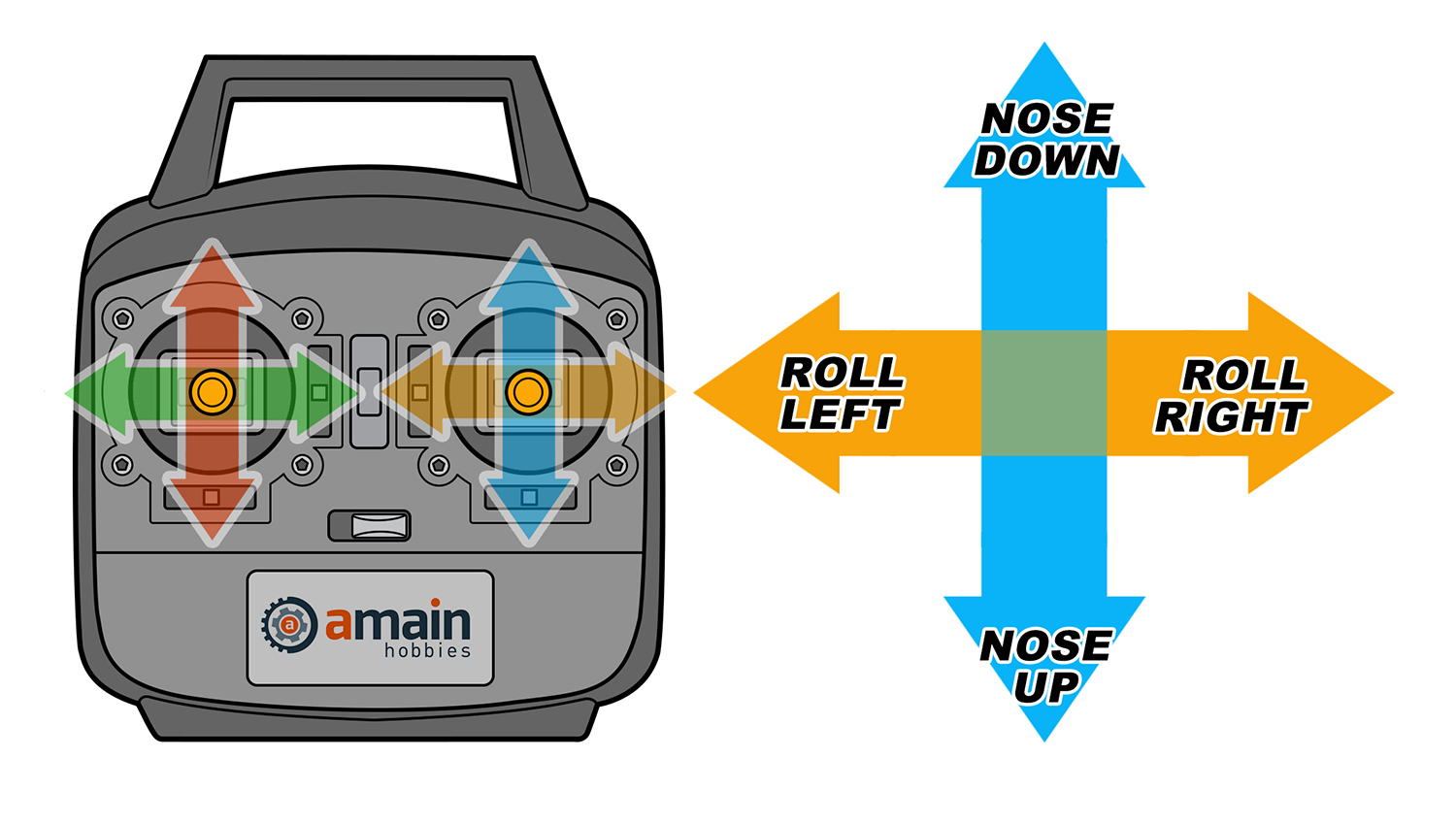 The aileron controls are intuitive because moving the stick right causes the helicopter to roll to the right and vice-versa if you want to roll left. However, some new pilots find that the elevator (nose up / nose down) controls are challenging to get used to because they are configured so that pulling the stick back makes the nose go up, and pushing it forward makes it point down. This is how full-sized aircraft are configured, but if you’re used to pushing a control stick up to make characters look up or move up in video games, it may feel “backward.”

Keep Practicing and Have Fun!

And there you have it, the basics of your helicopter’s control surfaces. Always make sure the rudder, elevator, and aileron controls are working correctly and in the correct directions before each flight, especially if you’ve unplugged any of the receiver channels for maintenance. Operating all the controls simultaneously with precision for smooth, confident flights takes practice, but you’ll get the hang of it quickly. Before long, you won’t have to think about what the sticks do as you fly your helicopter, in the same way, that you don’t concentrate on a bicycle’s handlebars every second as you ride.

Learn to fly with the RealFlight Simulator

The RealFlight RC flight simulator is a fantastic tool for mastering your model’s controls and becoming an instinctive flyer. When you’re confident with your skills in RealFlight’s virtual airspace, you’ll be ready to fly your RC helicopter in the real world just as comfortably.