Read Reviews
(10) Average Rating:4
Write a Review
This item is discontinued and no longer available for purchase. You may want to search our site for a similar item.
Discontinued Online 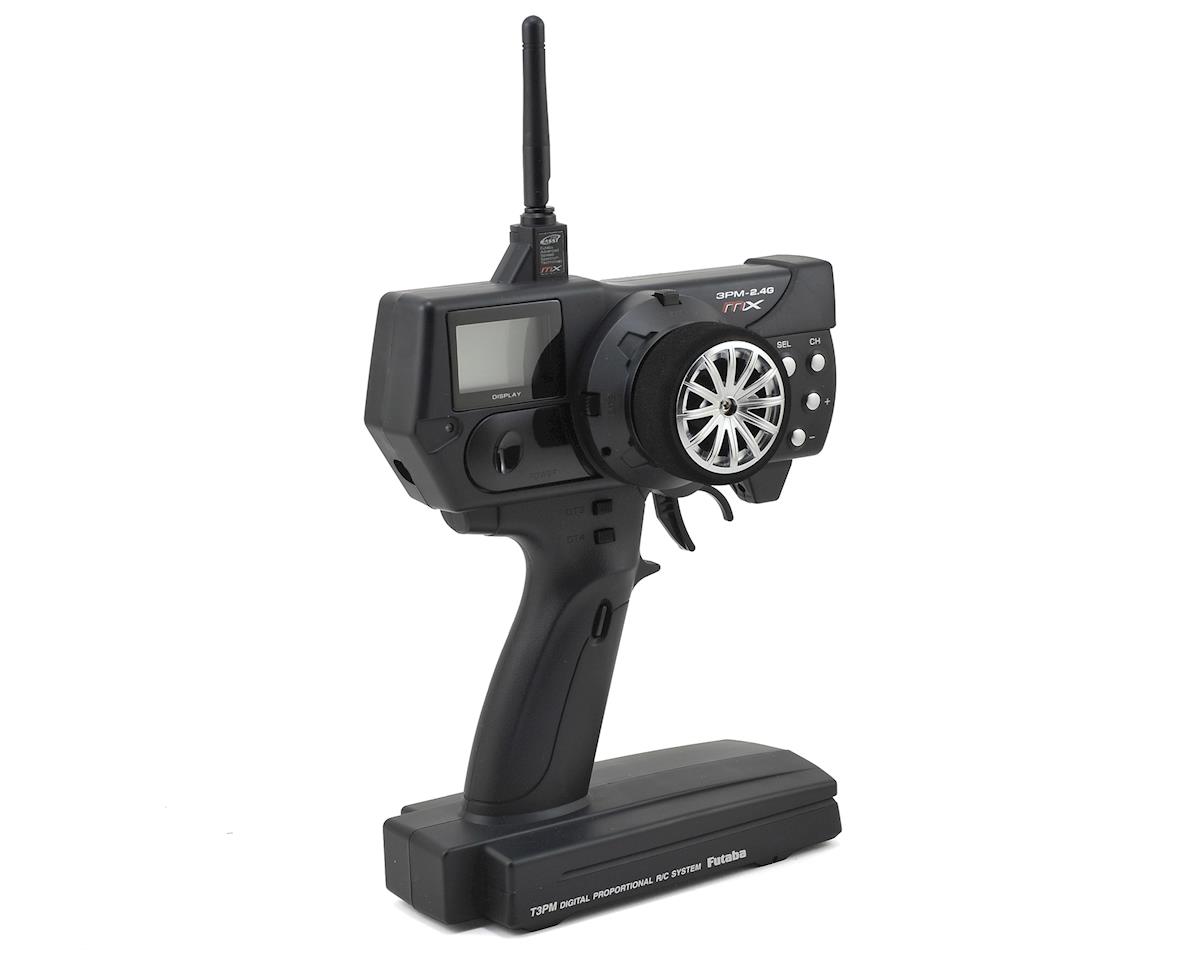 There's no need to buy separate systems for every application. The 3PM-X handles them all for a single, affordable price and gives you FASST 2.4GHz dependability as a bonus. It offers all the conveniences and features of the original 3PM, plus these new performance and programming pluses!

Four-wheel Steering Mix
Two modes give you a choice of two or four 4WS options — and the ability to switch between them with the push of a button. Choices include: 1) Crab; 2) All-wheel steering; 3) Front-wheel only; or 4) Rear-wheel only.

2/3-Position Channel 3 Programming
2-/3-position soft switch is perfect for dig on crawlers and other functions.


This product was added to our catalog on November 6, 2009

Pro- Great upgrade for any RTR vehicle or someone lookn for a 2.4ghz, so much easier to drive my SCT now....

The transmitter works perfectly. That is why I decided to pay extra for Futaba. There were some questions at the time on the range and reliability of the Spektrum radios. With Futaba, there is never a question. Pick the features you want and get out your wallet.

I also have to be honest and say that if Futaba had a 2 channel model with 10 model memories for $110, like they do now, I would have bought that instead.

The programming is pretty easy when you refer to the manual. If you lose the manual, and haven't done it in a while, you'll forget how to do it.

I have found that a computer transmitter actually makes me a better driver. You might think that is because I was not a good driver to begin with, but that is not the case. The ability to set endpoints is super nice for when someone else wants to drive your fast car or truck. Just set the throttle end point down to about 30% so it won't be fast enough to break when they do (and they will) crash it. For higher speed models, say above 20 mph, it is super nice to be able to program -15% expo so that a tiny touch on the steering wheel doesn't send your car into the curb. I also really like the timer function. I can use it at first to see how long of a run I'm getting on a given pack. Then, I can program it to beep a minute before that so I know I'm about done. The button that is positioned right underneath where your left middle finger would be I've programmed to actuate the timer. One switch for my thumb on the front under the steering wheel is used to adjust steering rate. I don't use this, because Expo is better in every way. I forget what the other one is for.

Another nice thing about a computer transmitter is that they usually display the voltage of the transmitter batteries. After trying NiMH AAs and alkalines, I've settled on Sanyo Eneloop low self discharge NiMH AAs. They are by far the best I've ever used. It is nice that they're not always dead when I pick up the Tx ready to go out for a run.

I gave this Tx a 4/5 rating. That is like a B in school, right? As far as functioning, it is perfect. I can run my truck until it is a tiny dot and still have full control. There is never any glitching. But there are a few things that were minor disappointments to me at this price point:

I think they have a new receiver out now that is only $60, but that is still ridiculously expensive. If Futaba wants to stay in the Tx game, they need to get those prices down to $30, where a lot of their competition is.
2 of 3 customers found this review helpful.
Robert Lai
Verified Owner
Futaba 3PM-X 3-Channel 2.4Ghz FASST Radio System w/R603FF Receiver
Been using 3PM for over 7 years now (the previous version). Feature wise, and for the most part, everything was great and working as expected. Except for the wheel which is not smooth, started squeaking noise after within a year usage (but it's okay, it can still turn, just have to bare with a little rough edge at the end when I turn my wheel all the way to the right. Also I had to send in the unit for repair (could not turn on) @ futaba after a yr usage and they indicated was bad soldering joints on the circuit board. But I was still happy with the Unit and would still give it a 5 star. Okay, so I switched to this new version and let me tell you so far I had Zero problems at all and I can feel the improvements (i.e. the wheel). so , I give this a 5 star. and it even has a little more features than the previous one like mixing features for crawlers. Bonus!
Thomas K
Futaba 3PM-X 3-Channel 2.4Ghz FASST Radio System w/R603FF Receiver
I have had my 3PM for about a year and a half now and I have enjoyed it since the day I got it. It has all the features that I need and then some...the interface is a little confusing at first, but once you get the hang of it, it is fairly easy to make adjustments. The range is great...mostly because I have never run out of it...I have never had an experience where range is an issue nor do I foresee any that it will be. It does use 8AA batteries, but they last a good long time. Rechargeable's would be ideal, but I don't have to change the batteries very often so I don't mind. Overall I highly recommend this radio system to anyone really.
1 of 2 customers found this review helpful.
John D
Futaba 3PM-X 3-Channel 2.4Ghz FASST Radio System w/R603FF Receiver
This is a good radio for the money, however there are better ones out there. The range is good as is the ease of programming. Dislikes include the quick trim buttons (4 total) are nice for a quick adjustment, but can get bumped easily adjusting settings un intentionally. Additionally / eventually the buttons can stick (which is why I am replacing mine with a different radio) and eventually become nonadjustable.

I have used Futaba for years, and will continue to do so - just not with this model or type model.
1 of 2 customers found this review helpful.
John Sandford
Futaba 3PM-X 3-Channel 2.4Ghz FASST Radio System w/R603FF Receiver
Got this set & several receivers to replace the Spektrum sets that come with RTR Team Losi vehicles. Now I have one transmitter for three vehicles & a rechargeable lipo battery to power the transmitter. Most Futaba transmitters can be run off one lipo which is far cheaper than using AA batteries & it lasts forever once charged. I've been using this radio gear for years & never had a problem. I'd recommend investing in a transmitter bag or case to protect your transmitter when not being used. I know there are now newer more advanced Futaba radio sets on offer but see no reason to upgrade or stop using what I already have.
0 of 1 customers found this review helpful.
Cameron Spruill
Futaba 3PM-X 3-Channel 2.4Ghz FASST Radio System w/R603FF Receiver
Wonderful controller I've had it going on 6 years and still works like the day I got it. Would highly recommend it.
0 of 1 customers found this review helpful.
Christopher Williams
Futaba 3PM-X 3-Channel 2.4Ghz FASST Radio System w/R603FF Receiver
Overall it's a very nice transmitter. The range on this thing is incredible. I also like the 10 model memory - although you cannot name your models, you just assign them a number. It seems pretty sturdy and very precise in its operation. I like all the custom functions. The only downside is that, like other reviewers have said, it's very "plasticky" and feels cheap. I'm confident that the electronics inside are top notch but its placed in a cheap feeling case. The older Futabas I still have from the 80's and 90's, even the low end models, feel like they were made with better materials. I'd still recommend this radio to everyone though!!!
0 of 3 customers found this review helpful.
View all reviews (10)