Categories related to this product 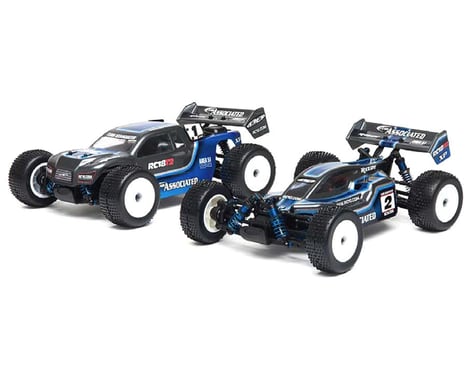 Discontinued Online
This item is discontinued and no longer available for purchase. You may want to search our site for a similar item.
Check Store Availability
For those having difficulty deciding on whether to build a RC18T2 truck kit or RC18B2 buggy kit, there is great news! The RC18T2/B2 kit includes the parts required to assemble either vehicle. If you change your mind later, simply use the extra parts to create the other vehicle.

Rafal Balcerzak
Verified Owner
Team Associated RC18T2/B2 Truck/Buggy Team Kit
First of all: if you have previos experience with RC and looking for 1/18 - buy it. But... be prepared for a bit of frustration. This thing after assembly by the book is just impossible to drive. The main thing is the common problem of rubbing between spur and rear diff. Before I bought it I thought it's gonna be something small and all that rumor about it seems unbelievable. It is serious. You'll have to strip plastic collar around the differential otherwise car will be almost impossible to move. Shimming (both; diff and slipper) isn't enough (if you have extra hardware, not in box).
I'm quite experienced in RC (have 10 other models in various scales) and I had some difficulties with motor setup. I had to modify holes in the motor holder using rotary tool. Finding one sweet spot when mesh was perfect without rubbing pinion against belt wasn't easy.
Whate else: steering Rack and Ackerman plate is a joke. You better order some aluminum one on eBay right away.
I wrote some opinions about all the problems with that kit and I was like: "pfff, it's just 1/18, what can be so hard? These guys are some noobs that have no idea what they're doing". I was wrong.
All together. If you want to make it your first kit - don't. Not for newbies unless you have some troubleshooting skills in mechanical matter.
This kit is a disaster and I'm really surprised Team Associated pushed such a underdeveloped product to the market. After disappointment and bit of frustration, after solving all the problems it is time to drive that thing.
And from that point you are rally happy you bought it. It's perfect on the track.
Team Associated, I think you gotta fire someone.
3 customers found this review helpful.
EJM
Team Associated RC18T2/B2 Truck/Buggy Team Kit
I just finished this kit and must say that it would be a tough build for anyone who is inexperienced at building rc kits. The finished product is awesome, and the car drives very well. However, getting to that point may be difficult if you don't have some building experience. The biggest problem is the location of the pinion and how it sits in relation to the belt - out of the box the pinion gear rubs the front drive belt and causes excess amounts of drag and friction. In short, you have to find a motor that will fit in the lower two holes of the motor mount, lowering your motor so the pinion clears the belt. Some motors will fit this way, some will not. You also have to take great care when assembling the diffs and drivetrain. The rear diff case will rub the spur gear if you don't grind it down or shim it away from the spur. The belts can still be too tight if you overtighten the tops of the gear cases, you have to assemble them with great care. This kit was a lot of work for me, but the finished product is awesome. Again, this is not a kit for beginners but it can be a fun car if you are willing to work the bugs out. I am pleased with the outcome, despite the amount of work it took to get me there.
2 customers found this review helpful.
Rob
Team Associated RC18T2/B2 Truck/Buggy Team Kit
This was my first kit car I've built, and the second car I've owned. My build experience is with helis and much of this build is extremely similar. However, this build was cake by that I mean easy. I read some of the reviews other places and I was expecting a nightmare, but it took me a little less than three hours to build (with lunch and texting in between). There is ZERO play in the differentials with no extra shims needed. Zero play in the steering and I'm using the servo saver. Happy to say after countless packs on 3S I'm still using the original belt. No spur or pinion rub to speak of.There were a few step bag mistakes where the parts bags didn't match the steps, but that was easily to overcome by looking in the next bag each time.

But don't get me wrong, this car isn't perfect. I would have given it four stars but I don't think it deserves the 2 and 3 star ratings from 2011 because obviously things have changed. I gave it a five. There are some things that make this kit a 4 and not a five.

- First and probably the biggest problem there is the lack of local parts support. I live in a large city and none of the 3 local hobby shops I support carry 1/18th parts period. The mantra is "1/10 is where it's at..." So make sure you buy spares, or you'll be waiting on the postman for your parts.

- The stock plastic diff outdrives don't handle 3S very well. I stripped them about 5 or 6 packs in. I can't speak about 2S because this car has been 3s from day one. I'm running a CC Mamba Micro with an 0808 5300Kv motor. I bought MIP outdrives, but they've been discontinued for the RC18T/B. You can still find them a few places if you look for them. You have to order the Factory team ball diff kits (front and back) in order to use them though. The MIP diffs truly change the fun factor of this car. If you can't get the MIP outdrives, get the factory team ball diffs and huck the stock diffs right away.

- The wheel selection is shameful and the tires are garbage.

But if you take all that into consideration, and put it up against how fun this car is to drive, and how easy the build is it's a solid for stars and a "buy it."
Anonymous
Team Associated RC18T2/B2 Truck/Buggy Team Kit
I got this kit last year and built it in the first week. The only thing i have had a hard time with is the belt overheating the motor. I fixed that and then put a reedy brushless system on the car with a 2s lipo. This car is really fast. I just built a track in my basement and the tires work perfect with my carpet. It does not run in grass very well so i suggest indoor driving or to go to a local dirt track. I would reccomend this buggy to my friends anyday.
Jonathan Fox
Team Associated RC18T2/B2 Truck/Buggy Team Kit
This kit has some terrible flaws out of the box. Depending what motor you use (I'm using an orion system designed for this truck), you may not be able to solve the pinion rubbing problem mentioned by the previous reviewer, I am going to have to modify the motor mount myself. Add to that the problem mentioned by the other reviewer of the belt system causing too much friction (too tight), overheating motors and escs. Then consider that the diffs need a lot of shimming and extra shims are not supplied. Finally, the steering system has so much play it is unbelievable. The Hot Racing alloy bellcrank kit is an essential upgrade. If you don't mind fixing these kinds of issues with more money and time, this has the potential to b a race winning truck. If you just like things to work out of the box, go for something else, as this will cause you heartache. Disappointing from a supposedly reputable company.
Anonymous
Verified Owner
Team Associated RC18T2/B2 Truck/Buggy Team Kit
Bought this for my 7 year old son and he loves it.
Easy build, like the chose between buggy or truggy.
The only thing I noticed though if you don't put the motor right the pinion it will rub the belt.
Other than that no complaints and I would recommend this little guy to anyone. :)
Suzanne Dunn
Team Associated RC18T2/B2 Truck/Buggy Team Kit
not so great the old one is better the belt over heat the motor
Marcos Vinicius Jardini
Verified Owner
Team Associated RC18T2/B2 Truck/Buggy Team Kit
In my opinion, this car specifically is a combination of great parts and a terrible belt drive system, really poor engineered. So you end up with a car that runs like a pro for 5 minutes and later you have to fix it for an hour. I, personally, want to have fun, not a headache. I do not recommend it to anybody..
0 of 1 customers found this review helpful.
View all reviews (7)