Read Reviews
(1) Average Rating:5
Write a Review
This item is discontinued and no longer available for purchase. You may want to search our site for a similar item.
Note: Manufacturer does not allow using discount coupons
Discontinued Online 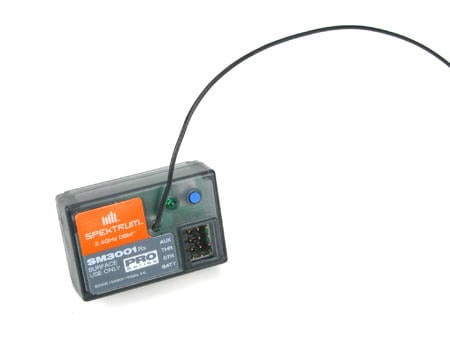 It all adds up to lightning fast response and it’s sure to have racers feeling more connected than ever!

Increasing durability even more, we've changed the type of plastic used for the case. The new case is now fuelproof. No need to worry about small fuel spills -- it can take it!

With the new Pro Series, we've taken a great thing and made it even better!

mark earnshaw
Verified Owner
Spektrum RC SR3001 DSM Pro 3CH Receiver: Surface
I have used 3 other different spectrum receivers and nothing has come close to the response time i get from this amazing receiver.If your after a very descent receiver for under $100 then look no further.well built and designed, thanks Spectrum!!!
1 customer found this review helpful.
View all reviews (1)
Related Products
Previous Next Move Close