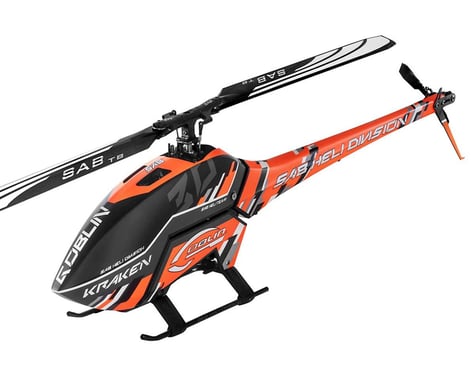 Save In List
Note: Manufacturer does not allow coupons
This item earns up to 1096 VIP Reward Points Learn More
Check Store Availability

The SAB Goblin Kraken features many new design concepts into the latest helicopter offered within the Goblin line up to-date. Goblin Kraken is the 30th model released by SAB, and its unique design language will be a capable platform for many years to come. While the complete model mimics previous Goblin looks, many new features are found on the Kraken platform.


Features at a Glance:

Enclosed Gear Box System
While still under wraps, the designers and testing during development has delivered incredible durability through flight and crash testing. An enclosed design provides simplicity for the end user, as well as never before seen longevity thanks to it's generously oversized bearings, and other secret patent pending designs.

Kraken Rotor Head - Performance and Durability
The Kraken Rotor Head provides users with several updates. First and foremost is the Rotor Head, & Blade Grips are manufactured from 7075 aluminum. When paired with the Blade Grip Arm (the disposable part in a crash), that is manufactured from 6061 aluminum, and serviceable from outside the rotor grip, both building the new kit, and maintenance will be a breeze. Additionally, there are two Blade Grip Arms offered for different flying styles - spacing 26mm from the center of the rotor head, and 30mm. 26mm provides a higher response rate, and 30mm will provide a higher resolution feel.

Kraken Tail Rotor
While featuring a standard tail group design with a pitch slider and lever, SAB ensured performance of the Kraken was at the top of the design list in every way possible. Shedding 22% of the weight over previous Goblin tail groups, the Kraken not only incorporates a powerful and reliable tail system, but adds small amounts of performance gain by removing weight far away from the CG - aiding in Flybarless performance, and flight characteristics.

Scott purkess
Verified Owner
SAB Goblin Kraken 700 Electric Helicopter Kit
Very well packaged the instruction manual was well Illustrated and informative even going as far as color coding true color for Loctite retaining compound Greece Etc as for the helicopter itself went together for very smooth anyone who owns a goblin knows what I'm talkin about if you have never owned a s a b Goblin you are truly missing out
1 customer found this review helpful.
Hal Staniloff
Verified Owner
SAB Goblin Kraken 700 Electric Helicopter Kit
SAB's latest creation doesn't disappoint. You'll find the same high-quality kit that you've come to expect from SAB. Manual is clear; parts are well packaged; bags/foam palettes are clearly labeled. With the right experience and tools you can build this kit in about 15 man-hours. The design is simple and makes maintainence a breeze; the best yet of all the Goblin helicopters! SAB's latest innovation is a closed transmission which now comes with a filling point so you can lubricate the gears without taking the unit apart. Wire management is well thought out and implemented. Although pricey, you get what you pay for. This is truly a high-performance 700 meant to serve the experienced RC helicopter pilot. An amazing machine!
1 customer found this review helpful.
Brett Kasper
Verified Owner
SAB Goblin Kraken 700 Electric Helicopter Kit
This is my first electric 700 size machine and I am thoroughly impressed. The instructions are wonderful stepping you through assembly and the machining and build quality is TOP NOTCH. The ball links are SUPER tough to get on/off but they may loosen up after a bit. They swivel nice without being too tight but getting them on and off is tough. Helpful hint: don't build the tail pushrod until you set the belt tension for the tail. I had it way off and had to adjust it again. The threads on the ball links are VERY tight and I had to use a drill to thread the studs to the links. I needed two wrenches to make adjustments on the turnbuckles for the main blade grips as using the turnbuckles popped the links off instead of making the link shorter/longer.
Overall I really love the machine as it is super smooth. The blades seem great too. Be sure to join the FaceBook group for great conversation. Still trying to find the best option for the FBL mount to minimize vibration.
Matt Coleman
SAB Goblin Kraken 700 Electric Helicopter Kit
I opted to try something new and went with the Orange Kraken because it looked easier to see. It went together very easily and was fun to build. It flies really well and is very accurate like what the youtube videos say.

My only real gripes are I wish I could buy it without blades or that it came with bigger mains and tails. I also am not a huge fan of the canopy (front) being mostly black. The last is mainly on me because I am used to aftermarket canopies that are very bright all around.

Would buy again and I may get a custom canopy to make the black a different color.
View all reviews (4)
Related Products
Customers also purchased...