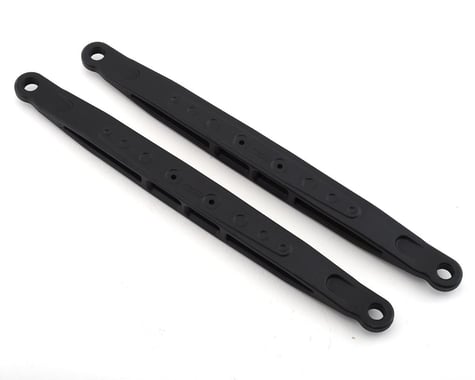 This is a pack of two optional RPM Trailing Arms for the Traxxas Unlimited Desert Racer. The Traxxas Unlimited Desert Racer is a scale work of art with performance to match. However, RPM customers have reported the stock trailing arms are a weak link. If you’re tired of bending and breaking stock trailing arms, RPM has the answer!

What makes RPM versions so tough? They started by increasing the wall thicknesses by roughly 40% in the damage-prone areas around the shocks. They then added more material around the pivot balls by roughly 12%, using up all of the available room at the axle mount. They also squared off the bottoms of the Trailing Arms, giving them room to build their unique, reversible Trailing Arm Skid Plates (RPM81362 – sold separately). Adding RPM Trailing Arm Skid Plates to a set of our Trailing Arms will provide some of the best and toughest protection your ride deserves.

RPM Trailing Arms are manufactured in the USA and are molded from their engineering grade nylons, factory backed with a limited lifetime manufacturer breakage warranty. Bolt on a set today and never worry about fragile trailing arms again!

This product was added to our catalog on October 23, 2018

James T
Verified Owner
RPM Unlimited Desert Racer Trailing Arms (2)
Very strong and sturdy trailing arms! I think this better works without the skid plates. The skid plates do not sit flush and stick out resulting in getting caught in rocks and being ripped off. Beefier and better looking than the stock trailing arms.
View all reviews (1)
Related Products
Customers that bought this also purchased...
Previous Next Move Close