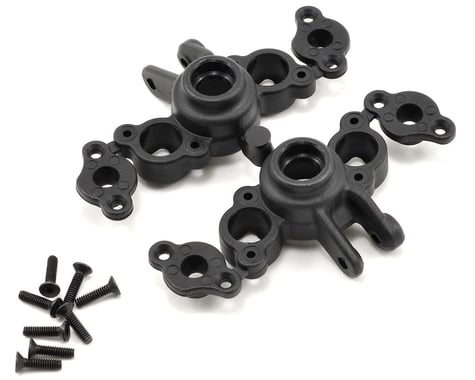 This is a set of optional RPM Axle Carriers, and are intended for use with the Traxxas 1/16 E-Revo and 1/16 Slash trucks. There is very little that can be as frustrating on an R/C vehicle as slop in the suspension system. In the case of the 1/16th scale mini E-Revo and mini Slash, there is absolutely no slop adjustment for the suspension pivot balls. Once the axle carriers begin to wear at those balls, the camber, toe and caster angles don’t stay true, causing the vehicle to wander, making it very difficult to control.

That is where RPM steps in. Their 1/16th scale mini E-Revo and mini Slash Axle Carriers have a unique pivot ball retention system that locks the pivot ball in place, yet still allows for adjustment to compensate for wear. This system is based on a cap design, held in place with a pair of small screws. Simply slip the caps in place, tighten the flat head screws until the free play of the pivot ball is eliminated and you’re ready to go!

RPM Axle Carriers have been completely redesigned for added durability and crash-survivability. RPM engineers found that the stock pivot ball opening could be reduced in size to help support the pivot ball better, meaning a significantly lower chance of pulling the ball through the hole. The redesigned overall shape and superior materials that go into the RPM design make them the best alternative at the lowest price available! To top it off, RPM axle carriers are marginally lighter than the stock versions! Designed, manufactured and molded in sunny Southern California, RPM brings pride to the expression “Made in the USA”!
Brent Weinheimer
RPM Traxxas 1/16 E-Revo Axle Carriers (Black)
I put a set on the front and they are much better than OEM. I am ordering another set for the back.
Very good product, thank you RPM.
2 customers found this review helpful.
Brandon Place
RPM Traxxas 1/16 E-Revo Axle Carriers (Black)
Adjusting the pivot ball is an upgrade from stock. Other than that they are just as bad. Do a few kartwheels and the pivot balls pop out. The wheel bearing holes get hammered out after 20 runs. These were on the back too. GH in front with no problems on 40+ 3s bash runs. Unless you computer balance your wheels and never crash:)
2 of 3 customers found this review helpful.
Brad Stevens
Verified Owner
RPM Traxxas 1/16 E-Revo Axle Carriers (Black)
Been running these for two years now. Never had a problem with them until I ran through a couple of dozen batteries drifting around in some baseball diamond clay, and the dust wore the bearing locations and pillow ball sockets out to the point where large amounts of slop developed. That was over the space of a week however, and entirely my own fault for putting the truck through runs in such conditions.

I did have them pop a few balls once, but that was when the right front wheel directly impacted a concrete parking stop at about 50mph. Tore the whole carrier right off of the arms, but all in all, light damage for such an impact I would say. The carrier in question was a little looser afterwards, but not enough that I’d felt the need to replace it in the three months that followed. That was something of a rare crash for me though, and I don’t do much in the way of jumping, so I suspect the damage would have compounded quickly to the point of causing problems with popped pillows with more cartwheels and hard landings.

They are plastic. They will wear out eventually, and how soon will definitely depend on running conditions, but mine served very well running speed runs mostly on asphalt and gravel for two years. It was only when I started sanding them down with clay dust recently that they began a rapid deterioration.

I got my bang for my buck out of them however. I’m not sure I would want to run a new set through such an abrasive environment much, but I’m definitely satisfied with their longevity in less hostile conditions.
&#1054;&#1083;&#1077;&#1075; &#1057;&#1077;&#1084;&#1077;
RPM Traxxas 1/16 E-Revo Axle Carriers (Black)
It's a very good stuff. Easy to install. Very usefull thing.
1 of 2 customers found this review helpful.
Anonymous
Verified Owner
RPM Traxxas 1/16 E-Revo Axle Carriers (Black)
These axle carriers became so loose that the pivot balls would pop-out at the slightest impact. And the bearings never fit snugly and easily spun in the bores. I returned them to RPM and received snide comments by email. No thank you RPM. Poor product and no customer service.
1 of 2 customers found this review helpful.
View all reviews (5)
Related Products
Customers also purchased...