Read Reviews
(3) Average Rating:2
Write a Review
This item is discontinued and no longer available for purchase. You may want to search our site for a similar item.
Note: Manufacturer does not allow using discount coupons
Discontinued Online 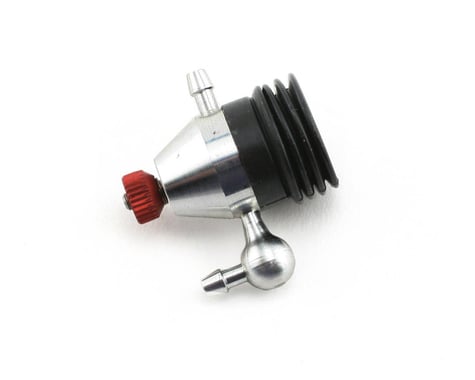 This is the Team Orion CRF Constant Pressure Device. When an engine is running at full throttle, a large volume of burned gases flow through the exhaust. Part of the gases are expelled out of the exhaust pipe and part of the gases find their way towards the fuel tank. Engines have 2 main settings, High Speed Needle (HSN) and Low Speed Needle (LSN). Engines are tuned to have the highest speed possible with the HSN and to be stable at idling with the LSN. When the engine stands idling, only a small amount of pressure is created, when the engine runs a full throttle a large amount of pressure is created.

Problems arise when you switch from full throttle to low speed, high pressure generated from running at full throttle is still present and it is pushing fuel to the carbutaror inlet though the carburator is closed. Because of this the mixture will become too rich, causing slower acceleration and wasting fuel. The Team Orion CRF Constant Pressure Device acting as a pressure valve system, effectively resolves this problem by regulating the amount of pressure going to the fuel tank. The valve allows a constant amount of pressure to be sent to the fuel tank, by opening or closing itself depending on the engine’s rotation speed.

This product was added to our catalog on November 28, 2007

The pressure in the fuel system after running at a varying throttle range is the only thing that keeps the engine from running lean!

The "loading up" effect is caused by atomized fuel and air condensing on the inside of the crankcase, NOT TOO MUCH PRESSURE IN THE FUEL SYSTEM!

brock snowdon
Team Orion CRF Constant Pressure Device
I would imagine any excess pressure in the tank from full throttle will be reversed and travel back out to the exhaust when full throttle is closed.
Ronald "ABN Hoosier" RANKIN
Team Orion CRF Constant Pressure Device
OK, this has been on "Back Order" for a while now.....what's the verdict???? Is this thing the greatest thing since sliced bread, or is it a waste of $$$????
View all reviews (3)
Related Products
Previous Next Move Close