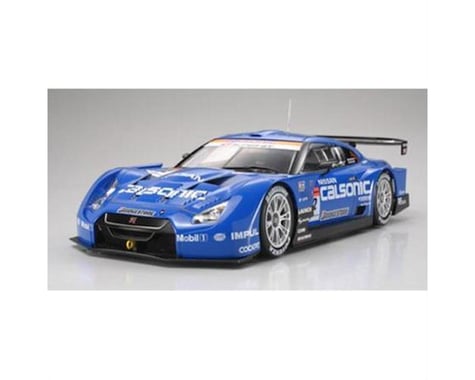 Be the first to write a review!
Discontinued Online
Check Store Availability
This item is discontinued and no longer available for purchase. You may want to search our site for a similar item.
The Tamiya Calsonic Impul GT-R R35 1/24 Plastic Model Kit is a replica of the 2008 Japan Super GT Series Team Impul race GT-R driven by team drivers Tsugio Matsuda and Sebastian Philippe. Team Impul have continued using the same highly famous blue livery that their previous Nissan Skylines sported. At the 2nd round at the Okayama International Circuit, Team Impul won second place behind the Xanavi Nismo GT-R (TAM24308) giving the GT-Rs an incredible 1-2 finish. At round 6 at Suzuka, Team Impul recorded its first win for the season.