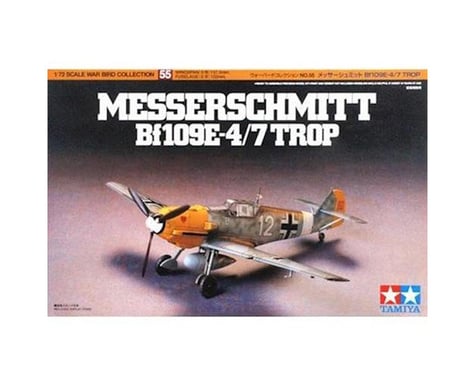 This is a Tamiya 1/72 Scale Bf109 E4/7 Tropical Model Airplane. During the first half of the Second World War, the Messerschmitt Bf109 E was the main fighter of the German airforce. The E-4 housed a 1,100hp Daimler Benz DB 601Aa engine and was armed with two 7.92mm machine guns on the nose, as well as a 20mm cannon on each wing. For some aircraft, bullet-proof glass was used to reinforce the front of the canopy. In addition, a 20mm canon, which ran through a tube in the propeller was supposed to be installed but was unsuccessful. Displaying superb acceleration and diving ability, the E-type planes overpowered the RAF's Hawker hurricane and equaled the Spitfire fighters in the Battle of Britain. However, with a flight range of only 560km, the E-4 planes were limited to just fifteen minutes of combat over British skies. Thus, the bombers were not given sufficient support and sustained heavy damage. As a result, the Luftwaffe's strategy to bomb England into surrender ended in failure. To deal with this drawback, the E-4 planes were equipped with additional 300L fuel tank. These improved fighters, called E-7, were first deployed at the end of 1940. After the Battle of Britain, the E-4/7 planes were sent to the front lines of Northern Africa. As the Bf109 F-type fighter's production was advanced, the E-4/7 was retired from the front lines. However, some veteran pilots continued to use the E-4/7 mainly for ground support duty until the summer of 1942.

This product was added to our catalog on January 14, 2020