This item earns up to 26 VIP Reward Points Learn More 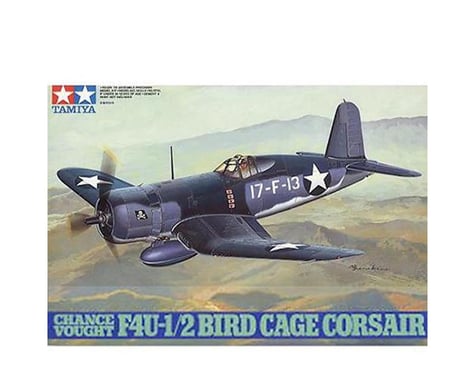 This is a Tamiya 1/48 Bird Cage Corsair F4U1/2 Model. he F4U Corsair was a WWII American fighter aircraft that was distinguished by its inverted gull wing design, which accommodates the 4m diameter propeller without having to resort to overly long landing gear legs. Its Pratt & Whitney Double Wasp engine produced 2,000hp and allowed the Corsair to reach a maximum speed of 636km/h. Among the different variants of the Corsair, the F4U-1 was the first to be mass-produced and it featured a characteristic framed canopy that was referred to as a "Birdcage." They were deployed to the Pacific in February 1943 and became feared by Japanese forces due to their speed and firepower. A nightfighter version, designated F4U-2, was also created and featured a radar pod mounted near the wingtip of the right wing. Over 9,000 examples were produced and they were used by American, British, and New Zealand forces.

This product was added to our catalog on January 14, 2020