This item earns up to 46 VIP Reward Points Learn More 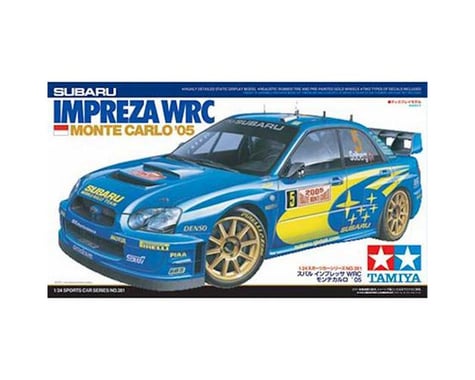 The Tamiya 1/24 Subaru Impreza WRC Monte Carlo 2005 Race Car Model Kit, a plastic assembly model of the full size car.
For the 2005 WRC Monte Carlo Rally, the Subaru team entered the upgraded Subaru Impreza as used in the latter half of the 2004 season. Despite suffering brake troubles, 2003 champion Petter Solberg was able to keep up with the leaders after the first 2 days. On the final day he recorded the fastest times in the first 2 stages to climb up to 3rd place, before being forced to retire after a heavy crash in the snow. Although unlucky in the first race of the season, Solberg and the Subaru team were able to quickly forget the disappointment of Monte Carlo, taking victory in round 2 in Sweden, proving Solberg and the Impreza have what it takes to win the WRC crown back. Build this scale model and get in on the action!