This item earns up to 28 VIP Reward Points Learn More 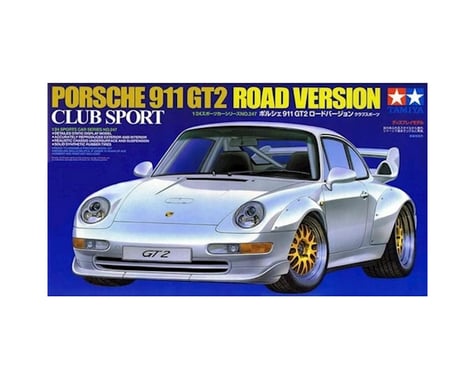 This is a Tamiya 1/24 Scale GT2 ST Version Porsche Model.

Only Porsche, committed to sports car racing, could make a racing version and production version of a sports car nearly identical. The Porsche 911 GT2 was first developed in 1995 to compete in sports car races and GT2 class circuits. The guts of this racing machine consist of 6-speed, rear-wheel drive transmission, powered by a rear installed 3600cc air-cooled V6 engine with 450hp of output. The street legal version had its output reduced to 430hp, still deemed more than enough for public roads, and featured the added comfort of nice air conditioning and the luxury of great audio. Intended as a means of practical transportation on workdays and for weekend warrior circuit racing on off-days, the compact Porsche 911 GT2 Road Version brought unprecedented delight to sports car fans all over the globe.