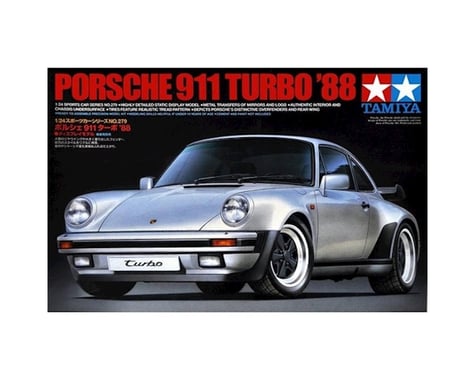 In Stock Online!
Usually ships in 24 hours
Be the first to write a review!
Add To Cart
Save In List
Check Store Availability
This item earns up to 30 VIP Reward Points Learn More
This is a Tamiya 1/24 '88 Porsche 911 Turbo Model Kit. Famed as the culmination of the 911 series, the Porsche 911 Turbo impressive design and performance made it the most well-known member of the 911 series.

The 911 Turbo debuted in 1975 as Porsches first street model to feature a turbo engine. The
air-cooled, horizontally opposed 6-cylinder engine featured a KKK turbocharger, 3-liter displacement and 260 hp output. Models built after 1978 featured upgraded engine displacement and output of 3.3 liters and 300 hp respectively. The 911 Turbos distinctive style, with its large-size rear wing and front and rear over-fenders, coupled with its reliable performance grabbed the attention of car enthusiasts around the world.

This product was added to our catalog on February 12, 2020