Be the first to write a review!
Add To Cart Save In List
In Stock Online!
Usually ships in 24 hours
$1.99 Flat Rate Shipping!
This item is eligible for $1.99 flat rate shipping Learn More
This item earns up to 17 VIP Reward Points Learn More 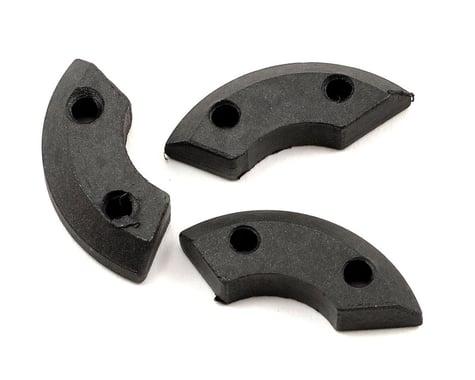 This is a replacement Serpent Centax Fly Weight Set, and is intended for use with the Serpent 835, 960, and 966 vehicles. Different from the original versions, these flyweights have been machined from a solid piece of material, where previously they had been injection molded. This difference in manufacturing along with the use of carbon & graphite results in a denser material that makes the weights harder, longer lasting and more consistent performance.

One other thing that makes these shoes better is the way they pivot, so instead of trailing flyweight, these are pushed out making for a slightly more aggressive clutch. Each of the 3 weights in the set also features a second hole into which the user can screw in a grub screw. This allows the racer to increase the weight, which will further increase the aggression of the clutch as it engages.