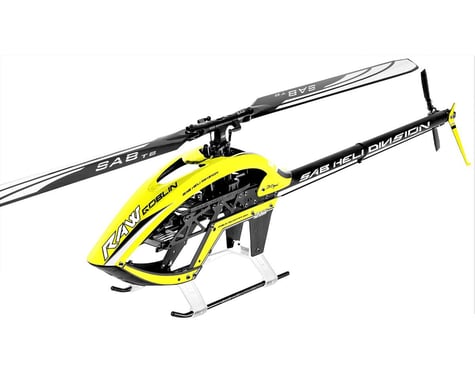 SAB Goblin Raw 700 is a derivative of classic pod and boom helicopter design, and features elegant Goblin aesthetics that you know and love from SAB Heli Division. Goblin Raw is the pinnacle of performance and innovation that SAB has produced to date. Thanks to it's unique and minimalistic design, the Goblin Raw is the fastest, best performing, and most lightweight 700 class model produced by SAB. New design features such as a large 35mm diameter boom, exoskeleton-esque canopy, and the ability to slide flight batteries in and out with ease provide pilots with creature comforts that have never been found in a single model. Goblin Raw also implements Kraken components such as the rotor head and tail assembly, and blends these proven parts with updated ideas also found on the Kraken such as the transmission box, and tail case assembly.


Features at a Glance:

While still under wraps, the designers and testing during development has delivered incredible durability through flight and crash testing. An enclosed design provides simplicity for the end user, as well as never before seen longevity thanks to it's generously oversized bearings, and other secret patent pending designs.

Kraken Rotor Head - Performance and Durability
The Kraken Rotor Head provides users with several updates. First and foremost is the Rotor Head, & Blade Grips are manufactured from 7075 aluminum. When paired with the Blade Grip Arm (the disposable part in a crash), that is manufactured from 6061 aluminum, and serviceable from outside the rotor grip, both building the new kit, and maintenance will be a breeze. Additionally, there are two Blade Grip Arms offered for different flying styles - spacing 26mm from the center of the rotor head, and 30mm. 26mm provides a higher response rate, and 30mm will provide a higher resolution feel.

Kraken Tail Rotor
While featuring a standard tail group design with a pitch slider and lever, SAB ensured performance of the Kraken was at the top of the design list in every way possible. Shedding 22% of the weight over previous Goblin tail groups, the Kraken not only incorporates a powerful and reliable tail system, but adds small amounts of performance gain by removing weight far away from the CG - aiding in Flybarless performance, and flight characteristics.

This product was added to our catalog on February 10, 2021