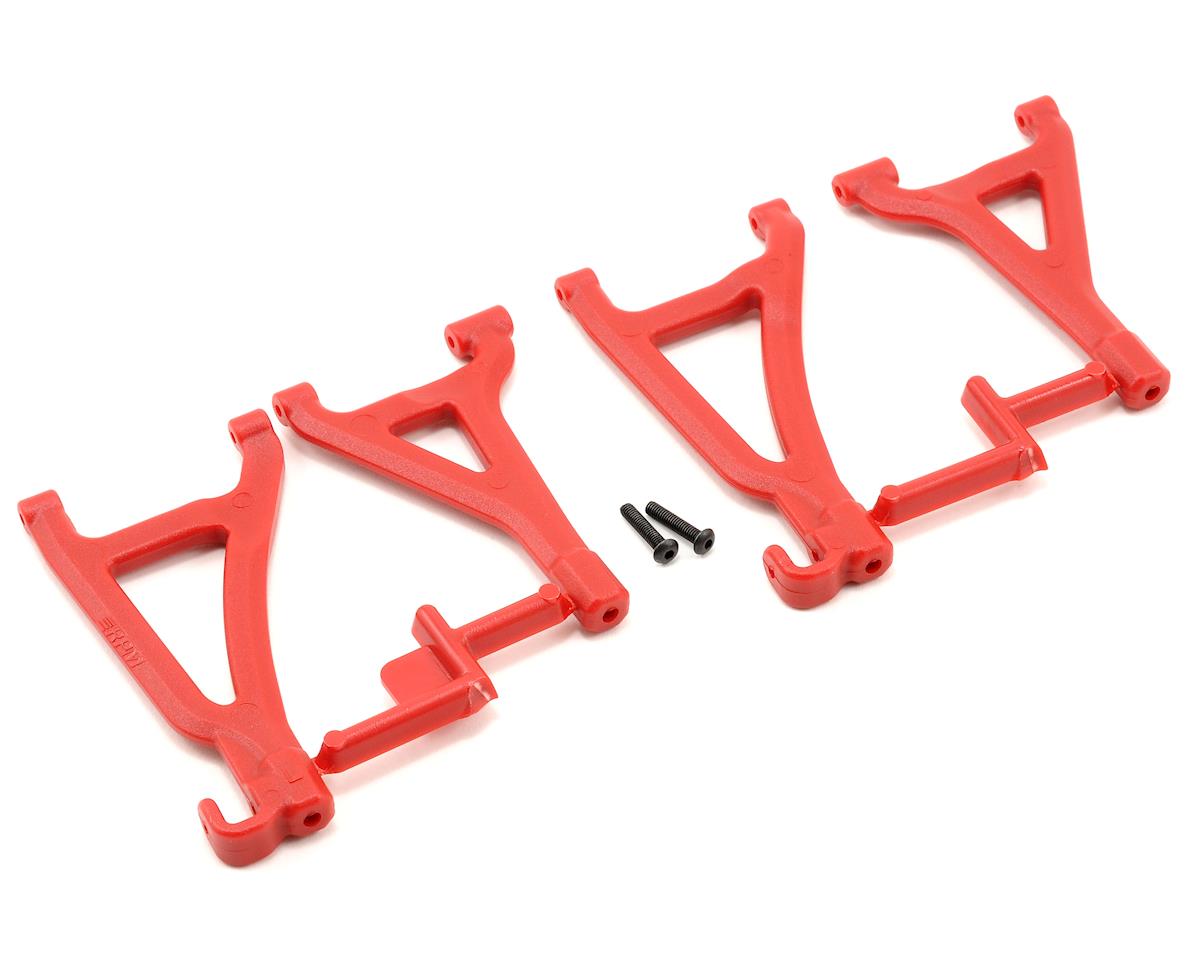 This is a set of RPM Front Upper & Lower A-Arms, and are intended for use with the Traxxas 1/16 E-Revo. Upon the release of the 1/16th Scale Traxxas Mini E-Revo, RPM immediately started receiving requests for durability upgrades. What better place to start than the front A-arms? With RPM's guaranteed unbreakable material and a proven A-arm design based off of their larger, 1/10th scale Revo A-arms durability for these little powerhouse trucks has finally arrived! Just as important as the performance, is the aesthetics...now these arms are available in Red, to give your truck what it needs to be a one of a kind mini monster!

Another problem that has been eliminated was slop in the suspension system. In some cases, as much as 1/32” of slop is found in the stock A-arms! That problem has been solved with these new RPM versions. RPM A-arms eliminate nearly all of the A-arm slop, which allows camber, caster and toe angle settings to be more solidly fixed in position. The result is smoother, more consistent steering and suspension movement with a significantly reduced tendency for the truck to randomly wander while driving. These arms also feature angled leading and trailing edges. RPM incorporates a 30-degree bevel in these areas, which reduces the chance of breaking suspension parts since the A-arm will naturally try to transition over objects instead of bluntly plowing into them.

RPM front A-arms for the Traxxas Mini E-Revo are sold in sets of four – both upper and both lower a-arms, and are backed by RPM's industry-leading breakage warranty. If it breaks (under normal operating conditions), send it to RPM and they will replace it!

Me
Verified Owner
RPM Front Upper & Lower A-Arm Set (1/16 E-Revo) (Red)
The upper arms needed some trimming to fit without any binding. Lowers were fine. New parts shouldn't need to be trimmed. I haven't had a chance to test out functionality yet, but they seem like they should be ok. RPM is known for tough parts. Another thing to consider is that these are probably not going to be a good route to take if you plan on dedicating your MERV to racing. They flex more than the stock arms. This much flex is not a good thing when racing.
2 customers found this review helpful.
View all reviews (1)