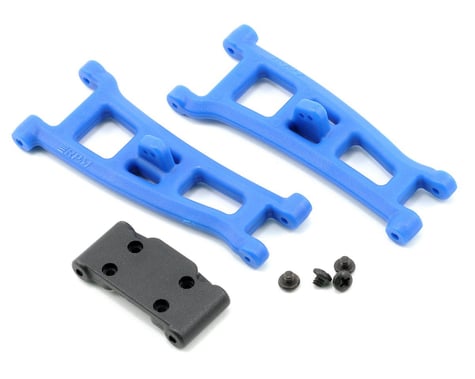 This is a set of two optional blue front A-arms from RPM and are intended for use with the Associated RC10GT2, T4 and SC10 1/10 scale trucks. The long-running success of RPM A-arms for the original GT has led to the release of RPM A-arms for the newest gas truck to come from Associated – the GT2. RPM GT2 A-arms were designed to solve several customer-related complaints about the stock A-arms. Foremost is durability. The RPM GT2 front and rear A-arms are designed to withstand some serious abuse! RPM has redesigned the entire front end, replacing the stock front bulkhead with a version that helps spread impact forces over a larger area at the inner hinge pin mounts. RPM front A-arms are wider at the inner hinge pin mounts by nearly 3/16” without altering suspension geometry.

The final focus was on slop elimination. RPM's strict quality control allows them to tighten up all of the tolerances without fear of binding the suspension system. The final result is a smooth, free moving suspension with minimal A-arm slop. The tighter tolerances on RPM A-arms allows other critical adjustments such as camber and toe angles to be much more consistent, which provides better and more consistent control of the GT2.

NOTE: These arms will work on the RC10T4, and SC10 trucks but the stock outer hinge pins are too long. This conversion will require you to modify your stock hinge pins by cutting them shorter, or purchase Associated Part ASC7927.