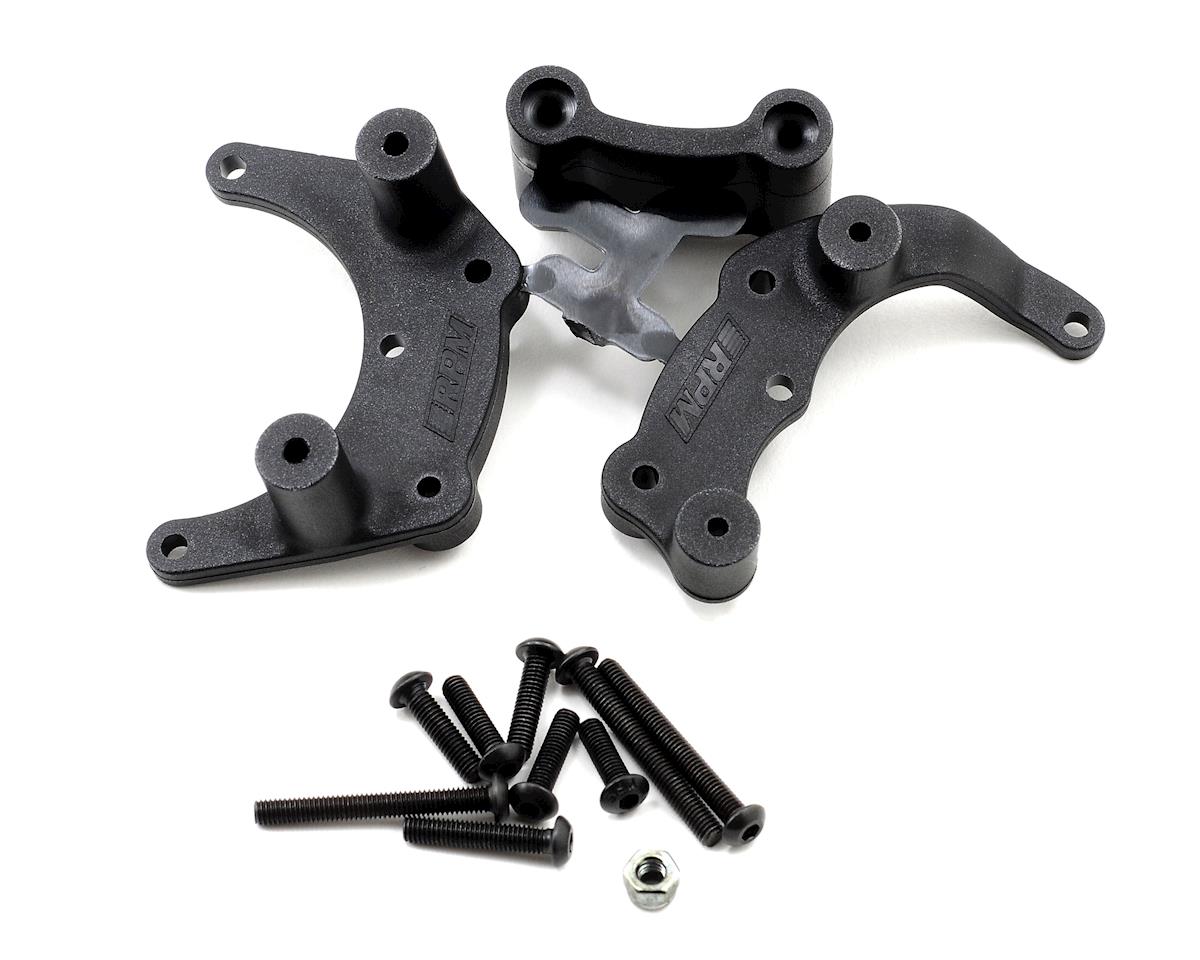 This is a a rear bumper mount from RPM, intended for use with the Traxxas Slash, Stampede, Rustler and Bandit 1/10 scale electric vehicles. After hearing numerous requests to look into the rear bumper mount on the Traxxas Slash, RPM has found several issues that could use their special touch. Those same problems were encountered on e-Rustler, e-Stampede & Bandit vehicles using the stock wheelie bar mount. The problem – the stock mount uses only a single screw on the gear cover side to hold the mount in place. That causes a hinge effect under rear impacts causing the slotted area holding on to the rear skid plate to pop off after an impact, leaving the stock bumper/wheelie bar mount hanging under the chassis. The RPM solution…An all-new bumper mounting system that eliminates all of the problems encountered with the stock version.

The RPM rear bumper/wheelie bar mount fits a wide range of vehicles too. It fits all versions of the Traxxas Slash, electric Stampede, electric Rustler and Bandit including VXL, XL-5 and legacy versions.  The RPM rear bumper/wheelie bar mount is molded in RPM's nearly indestructible blend of nylons and is sold in either blue or black. Each mount comes with all necessary hardware, complete instructions for ease of installation and an industry-leading warranty to back it all up!

Gunnar
Verified Owner
RPM Bumper Mount (Black) (Rustler,Stampede,Bandit,Slash)
Not too thrilled with this product. Granted, the stock Slash option isn't ideal either (unhooking on one side, digging up dirt and eventually breaking) but this unit has the following flaws:

1 - It makes it more time consuming to take off the gear cover (yes, only one nut but still). The included screw for that is also too short so the luck nut doesn't actually get far enough for the nylon to engage.

2 - It doesn't fit that well. The three mounting holes on each side are not perfectly aligned with the transmission case. You can get it there but if you use it as is it does stress the screws more then needed and make it more time consuming to take on/off as well.

3 - And worst, the holes for mounting the actual bumper are too shallow and the stock screws bottom out before the bumper is properly seated.

So, if you get this unit, use a longer screw for 1, adjust the holes for 2, and for 3, shorten the screws or make the holes deeper if you have the equipment for that.
2 customers found this review helpful.
WesK
Verified Owner
RPM Bumper Mount (Black) (Rustler,Stampede,Bandit,Slash)
I love RPM products. Fixed up my weathered wheelie bar with this mount on the rustler and i am very happy. this setup seems like it will handle a lot more abuse than the traxxas wheelie bar mount design. Any RPM product is a good bet; this mount is awesome i love it.
1 customer found this review helpful.
John Lovin
Verified Owner
RPM Bumper Mount (Black) (Rustler,Stampede,Bandit,Slash)
Easy to install. Seems more durable than the Traxxas stock parts.
Greg Berkowitz
Verified Owner
RPM Bumper Mount (Black) (Rustler,Stampede,Bandit,Slash)
The holes don't line up perfectly and as other reviewers pointed out, the top bolt on the gear cover side is too short to engage the lock threads on the nut (which by the way is the wrong size, I had to use my own). That said, it is definitely an improvement over the stock design. Every time I raced my Slash I've been having problems with the stock mount coming unhooked and catching the track. I know I lost at least one race for sure when this happened. So, it's worth the brief headache to install this if it prevents me from crashing out like that again. It's just that for $9, they really should give you something that lines up and comes with the proper hardware.
Brett Fraley
Verified Owner
RPM Bumper Mount (Black) (Rustler,Stampede,Bandit,Slash)
I give this product 4/5 stars because when its mounted on my truck The mounting holes for my wheelie bar are not lined up rite. Since there not lined up my wheelie bar is not level, and when i bring the front end up and the wheelie bar hits the ground the truck nearly loses control. Its not that big of a deal though. I would definitely recommend it still, its very durable and better than stock.
Anonymous
Verified Owner
RPM Bumper Mount (Black) (Rustler,Stampede,Bandit,Slash)
I figured id throw up a review on this product after I've had it for a while(3-6months). The stock bumper mount on the Slash 2wd gets the job done for the most part but has an annoying tendency to come "unhooked" from the rear skid plate. if you have a slash 2wd and jump it you probably know what I'm talking about. It comes unhooked from the skid plate and digs into the ground picking up a big chunk of grass and dirt with it. beyond that the stock mount seems like a poorer overall design being that it is really only connected on one side putting extra strain undistributed across the rear. The RPM design is GREAT! it has many more connections and makes everything much more solid. after installing it i never had to worry about breaking the rear end or just getting bugged by the grass catcher. I have a lot of rpm replacements/upgrades on the slash and the materials they use are top not and unbelievably durable. I will continue to buy from them until i stop needing parts... yea i wish that day would come : )
View all reviews (6)