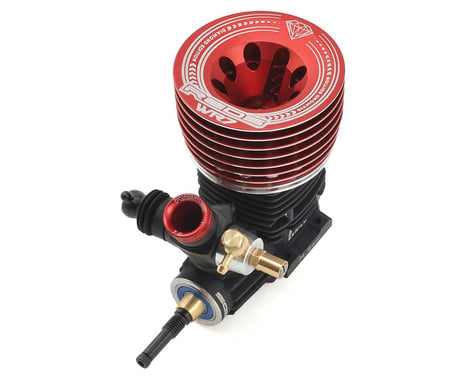 Discontinued Online
Read Reviews Write a Review
Check Store Availability
This item is discontinued and no longer available for purchase. You may want to search our site for a similar item.

The Reds Racing WR7 Diamond Edition .21 Off-Road Competition Nitro Buggy Engine is the pinnacle of nitro engine power, performance and driveability. Featuring special porting based on the R7 Worlds Edition engine, and a DLC Coated crankshaft and backplate for improved engine durability, the WR7 Diamond is built to withstand the punishment of racing at the highest level of the game.

The WR7 also includes a redesigned cooling head with an innovative design for improved air flow and increased cooling. The cooling head is also 10% lighter than the standard REDS cooling head to provide a lower center of gravity. Other features include the awesome HCX Carburetor, GEN2 venturi, Anti-Dirt Sealing System, and Mario Rossi Tuning.

M.Rossi exceed the quality with this new engine,
you can feel it from the material, to the time to start
it and tune it, the sound of this engine is absolutely
a delight.

Was really easy to break in and took me very little
time to hear the sweet spot for tune it. Worth every
penny.
3 customers found this review helpful.
View all reviews (2)