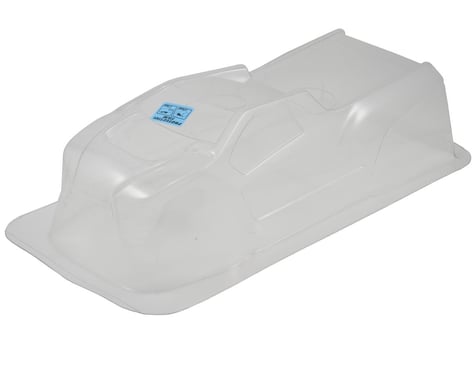 Discontinued Online
This item is discontinued and no longer available for purchase. You may want to search our site for a similar item.
Note: Manufacturer does not allow coupons
Check Store Availability

This is the Pro-Line BullDog Body, and is intended for use with the Mugen MBX6T 1/8 truck. Straight from the design studios at Pro-Line into the hands of Ryan Cavalieri, Richard Saxton, Billy Easton and Chris Jarosz at the 2009 Nitrocross World Championships, the BullDog body was an immediate success. “My truck just works better-more steering, more predictable and faster lap times. The narrow design allowed me to see what my truck was doing which made tuning even easier at Nitrocross,” says Ryan Cavalieri. We couldn’t agree more. In fact, the body worked so well that Ryan went on to put the fastest lap time down in the final, the fastest average lap thus giving him the 2009 Nitrocross World Championship title in truck.

NOTE: Painted body shown in photos is for illustrative purposes only. The body you will receive is clear and unpainted.

This product was added to our catalog on November 23, 2009

Gavin C
Verified Owner
Pro-Line BullDog 1/8 Truck Body (Clear) (MBX6T)
Awesome, I use this on my Arrma kraton and it fits almost perfectly, just a little bit of extra trimming is needed on the back, but nothing major. The lexen is very thick, so I think it will hold up well
View all reviews (1)