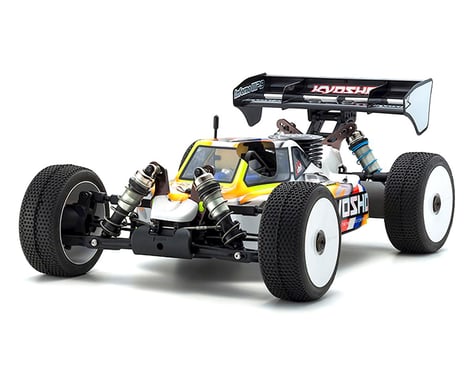 With its unrivaled record of 8 World Championship titles, the Inferno has continually set the performance benchmark for 1/8 scale engine racing buggies. After its first release in October 2008, the MP9 hoisted the trophy at the 12th World Championship in Thailand in 2010 as well as adding a 6th Japan National Championship to the Inferno’s stunning record of racing success. To celebrate this masterpiece of R/C racing machinery, the Inferno’s legendary designer Yuichi Kanai has further refined the latest MP9 TKI4 model through continuous testing and development to create the 10th Anniversary Special Edition! While maintaining the MP TKI4’s core strengths, 11 performance enhancing optional parts worth more than 30,000 Yen have been included in the 10th Anniversary Special Edition to take you straight out of the box and onto the podium.

This product was added to our catalog on March 1, 2018

Leonardo David Bravo Suarez
Kyosho Inferno MP9 TKI4 "10th Anniversary Special Edition" 1/8 Nitro Buggy Kit
This is the best of the best! the YAMAHA YZ ... from nitro buggy 1/8. extreme quality.
2 customers found this review helpful.
e
Verified Owner
Kyosho Inferno MP9 TKI4 "10th Anniversary Special Edition" 1/8 Nitro Buggy Kit
Instructions are lacking in clarification. Pro setup sheets might not be using this version of the mp9 and therefore the instructions setup and the pro's setups unfortunately do not provide favorable results and has been a major dissappoitment in purchasing this kit. The rear can not keep up with the front and one must deviate from recommended setups. Once I figured it out (along with locals recomendations) the car handled considerably better. Stock up on suspension bushings and front lower suspension mounts as well as a screw kit as loctited screws still find a way to get loose. The car does steer well but can flip easily. Minor setup tweaks can be felt on the track, it's fairly sturdy but intermediate level drivers might brake parts more often than not. Definitely a good deal with all the options included and it's nice that mp9/mp10 share majority of part #'s making them more readily available.