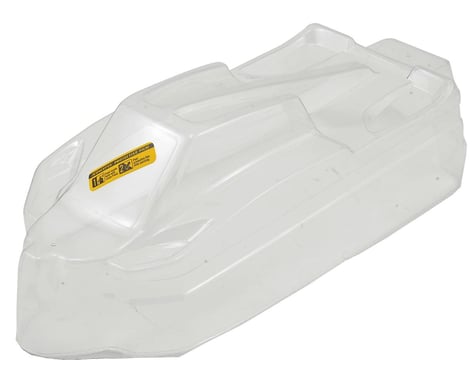 The JConcepts Tekno EB48.3 S1 Body has new elements created for fast and rough terrain driving. The cab is placed in a forward position with a medium rake angle for an aggressive driving feel without sacrificing out-right balance. The forward pods have the necessary height for high capacity batteries with an added scoop, built for cooling access from a forward position. The rear of the pods are built up and include a rear winglet which drops some force on the rear tires. The mid-length cab incorporates a one-piece side window layout and includes a long “shark fin” off the rear of the cab for side-traction and straight-line tracking ability.

At the rear of the cab rests several areas which can be trimmed for air-flow and hot air escape which is a common issue with E-buggy vehicles. Just behind the motor area, another escape pocket has been added for increased passage for flow while everything exits the rear in the “scoop-like” fashion. The sides of the body have a unique step treatment which adds some strength and also a fitted change of direction forming around the chassis side-guards. The end result has the body looking, BOOM, extremely low-profile with heavy JConcepts edginess and appeal. The Silencer is formed in clear polycarbonate material with protective film and each package includes window mask and detailed decal sheet.


This product was added to our catalog on October 7, 2016

Jeremiah Sensing
Verified Owner
JConcepts Tekno EB48.3 S1 Body (Clear)
JConcepts bodies are always great for me, I've been through 20 probably, but this one missed the mark. As the others stated, the servo horn rubs the scoop on the right side of the body and then if you cut the scoop out, it still hits at the corners and makes the body rock up and down.

Usually love JC stuff but this one was a swing and a miss.
5 customers found this review helpful.
Sergei Pisarenko
JConcepts Tekno EB48.3 S1 Body (Clear)
The right side of a body disturbs a servo-driver rocking chair, I had to cut out this place. I can apply a photo of video.
4 customers found this review helpful.
Daragh Slowey
JConcepts Tekno EB48.3 S1 Body (Clear)
I normally really like JC products so this is unfortunate to say, but this body does not properly fit the Tekno SL. There is a scoop moulded on the top side at the front of the body and this scoop interferes with the servo horn and the servo throw. You either need to run the body higher, which then means your body lines are off and you've cut it too short exposing a lot of the chassis side guards, which honestly looks terrible, or you need to heat up that area of the body and make clearance for the servo horn and it's throw, and that ain't gonna be pretty either.

Note to JC, simply remove that scoop(or even better, make a bulge on that side for the servo horn) and the body is a winner!
3 of 4 customers found this review helpful.
View all reviews (3)
Related Products
Customers that bought this also purchased...
Previous Next Move Close