Read Reviews
(4) Average Rating:5
Write a Review
Note: Manufacturer does not allow using discount coupons
Back Order Save In List
Out Of Stock Online
You may back order this item and it will ship when it arrives in stock. 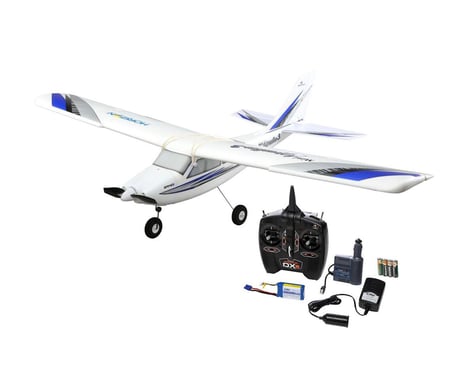 The HobbyZone Mini Apprentice S RTF was developed with beginners in mind. This airplane includes features that make taking to the skies easy - even in spaces as small as a local park. Beneath the durable Z-Foam exterior, pilots will find a robust brushless 370-size motor and 18A ESC. SAFE Technology provides multiple flight modes to progress through and the security of instant recovery at the push of a button with the included Spektrum DXe radio transmitter.

A large, easy-access battery compartment makes installing the included 3S 1300mAh LiPo battery hassle-free. When your skills have developed, optional floats can also be added for dynamic takeoffs and landings from small bodies of water. Get behind the sticks of the HobbyZone Mini Apprentice S today and turn your dreams of flight into reality.

This product is expected to arrive on Tuesday, September 22 2020

Out of the box, it comes with everything to get the plane running (which is great for a beginner like me). It also includes 4 AA batteries, which is very nice (not many manufacturers do this). The plane itself seems to be pretty well made overall, but there were a bit of "what happened here" places, which was the decals. The window decals were wrinkled, but no biggie, since I was able to smooth it out with a bit of heat applied. Another place was the wheels (or landing gear). The tires were not balanced very well (the plane kind of bounces around when on its wheels, kind of noticeable too). It was not big deal to me also, since I was going to get larger tires for it anyways (better suited for grass). Other than that, the overall quality seems decent.

The charger it came with had a cigarette lighter plug, but also came with an adapter for the wall. While that is nice of Horizon Hobbies to provide that, I would definitely consider using another charger since it is only able to balance charge (no storage charge), and even if you are charging it in a vehicle with a cigarette lighter plug, you would have to keep the car running until the battery is charged (which is more or less around 1 hour). Perhaps use it for the first few cycles, and after you get the hang of it, then upgrade to something that has more options. Since I use Traxxas connectors on my cars, I don't have an EC3 charger other than what they have provided, so I will be using that for now, and get an adapter to use it on the Traxxas charger.

The transmitter is also pretty nice (feels better and smoother than the Traxxas car ones). It is very smooth, easy to modulate, and be precise, and it also has a nice handle to hold on to at the back. It also has adjustable trims with actual buttons and levers for fine-tuning the channels (a whole lot better than the Traxxas LED flashing system). It also looks pretty nice too.

The plane itself comes partially assembled (takes around 30 min at the most to set it up), and it fairly simple (at least compared to cars). One feature that I love is how one servo controls both the rudder and the front wheel, making it able to turn better while taxiing. One thing that may be a bit finicky is mounting the wing with rubber bands (much like putting on the body of an RC car with clips).

Now onto how the maiden flight went... which did not exactly go as planned...
I turned it on and made sure the Safe was calibrated with the plane on flat ground. The day was calm, with a little wind blowing (average California climate). I first attempted to take off from the grass but found the tires too small, which flipped the plane forward onto its propeller. Take 2 was to start on a clay baseball court and fly over onto the grass. It was able to take off into the air, but it wasn't the best start. There was very little distance for it to take off, so I pushed hard on the throttle, which made the plane go up a bit too steep, and right before it lifted off, one of the wheels hit a base on the baseball court. Didn't go too well from there. From my past experience of driving cars without any gyro assistance, I tried to correct the plane as the gyro was doing the same thing. The plane had already gained altitude (of about the same height of a redwood tree or tall pine tree), and I was still overcorrecting.

End result: It crashed on its nose towards to left upper side of the plane (forgot to hit the panic button). The first thing I noticed was the smoke. It was the battery, as I had expected. When I got there, the whole battery compartment had fallen out of the plane, and the battery was disconnected from the ESC, which was definitely a good thing, and allowed me to save the rest of the plane before it went up into flames. From the damage inspection, the battery cover was burnt and deformed, and the plastic battery compartment was also scorched (damage from the battery fire). The things that actually broke from the crash was the propeller (bent and partially snapped at the base of one propeller), a deformed motor mount (not broken, just warped from the force of impact), and the wing had a fracture on the left side right by the plastic brace for the rubber bands.

It may sound like a lot of damage, but I don't think any other plane would have survived without a broken part from that crash. The crash was pretty brutal, it made quite a deep indent in the dirt, so I am very impressed as far of durability. As for now, I am not sure if any of the electronics have died since I don't have a battery for it at the moment, but I will update it after the new battery arrives.
Cory Coltharp
HobbyZone Mini Apprentice S RTF Electric Airplane (1220mm)
This plane is perfect for a beginner wanting to get into the hobby like myself. Easy to assemble (under an hour) and was easy to fly. SAFE feature makes it fun and is great for learning, very forgiving. If you are new like me I would definitely recommend this plane!
Ronnie Eckert
HobbyZone Mini Apprentice S RTF Electric Airplane (1220mm)
Just received my mini apprentices today. Assembly was quick and easy. Only complaint was there no screws to install the tail section but had some that worked just fine. Weather permitting I will make first test flight in the morning. Will advise on outcome. If it flies anything liKe its big brother then should be another great aircraft
0 of 1 customers found this review helpful.
View all reviews (4)
Related Products
Customers that bought this also purchased...
Previous Next Move Close