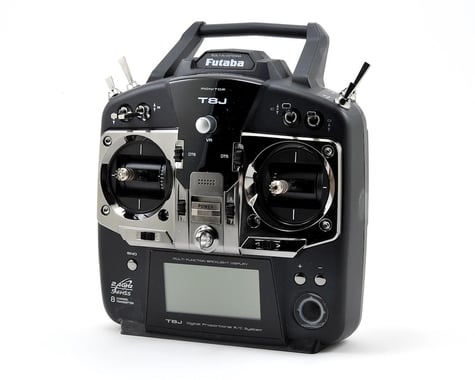 This is the Futaba 8J 2.4GHz S-FHSS 8-Channel Heli Radio System with an included R2008SB Receiver. The Futaba 8J has the performance and features you want, at a price you won't believe! Some of the awesome features you'll enjoy with the 8J include frequency-hopping security, the ability to transfer model data wirelessly between 8J transmitters, 6 programmable mixes (2 with curves), 5 heli flight conditions, 3-axis gyro support, 5-point pitch/throttle curves and a receiver with a full-range, dual internal antenna that can handle any application you can think of. All on-screen terms are spelled out on a backlit LCD screen. And everything is easily accessed and programmed with a jog dial and three buttons. The included R2008SB 2.4GHz S-FHSS receiver is S.Bus-compatible and features Dual Antenna Diversity. It also comes equipped to handle high voltage applications.

Precision. Programming ease. Versatility. It's all here with the 8J, and at a price that makes it one of the most incredible values in radio control. When you consider all of the functions that the 8J offers, along with its price point, you'll realize that this is one amazing system.

Note: The Futaba 8J radio system is available in two different versions accommodating the needs of both helicopter and airplane pilots. This helicopter version will default to helicopter settings when powered up and does not have a ratcheted throttle stick.

Raymond Maldonado
Futaba 8J 2.4GHz S FHSS 8 Channel Radio System (Heli)
HELI FLIGHT USE THE 3D AND IN MY FUTABA 8J HELI AND CONTROL IS THE BEST THAT I HAD AND VERY COMFORTABLE
View all reviews (1)
Related Products
Customers also purchased...