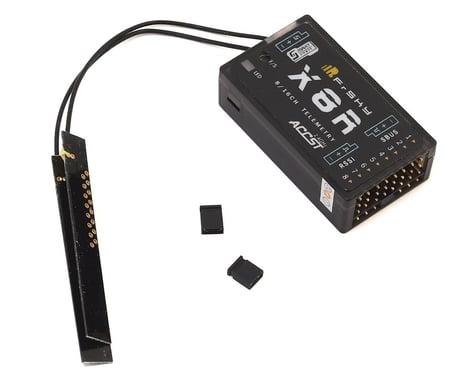 This is the FrSky X8R 2.4GHz ACCST 8/16 Channel Telemetry Receiver. Supporting hub-less sensors as well as older hub analog sensors, this small receiver supports 8 standard servo outputs or you can access all 16 channels by using the S.Bus line with S.Bus supported servos, or use a FrSky S.Bus decoder for the full 16 channels. You can also use two X8R's receivers in combination and the channels will sync 1-8 channels on the first and 9-16 channels on the second receiver.

This product was added to our catalog on January 8, 2016

Scott Marshall
FrSky X8R 2.4GHz S.BUS ACCST 8/16 Channel Telemetry Receiver w/Smart Port
I've been flying these in several Giant scale and a few of my smaller planes since they were released. 8 or 10 total. I use a Taranis as a Tx.
They are a little expensive compared to one of the 'plain jane' 6 ch receivers, but so worth it. When building a plane, the receiver you pick is a choice that may determine it's ultimate fate. Go for the high end unit - it only hurts once when you pay, after that, you'll be glad you went for the good receiver and so will your plane. The "modular" antennas can be a little clunky in smaller planes, but work great once you squeeze them in. In a pinch, you can remove the covers and mount the pcb antenna assembly with velcro or hot glue. They sell a nice "L" bracket for the antenna modules, but they are always out of stock.

Never a dropout or data failure. Telemetry is great, sure is nice to know exact battery voltages all the time you're up. Add the GPS module and you can store a complete record of your flight in your Taranis. Helps find a downed plane if needed. This opens the door to a lot of other telemetry goodies like temp sensors and tach for your gas engine stuff (even a fuel level guage).