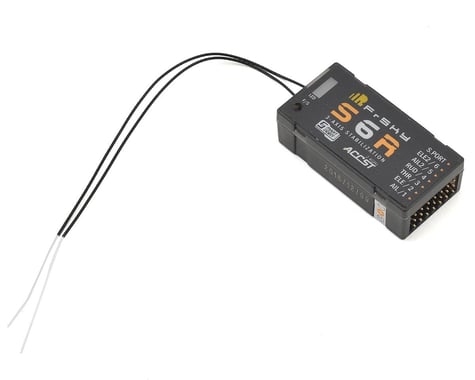 Out Of Stock Online
You may back order this item and it will ship when it arrives.
$1.99 flat rate shipping! Learn More
Back Order
Save In List
Write the first review

FrSky has bundled a 6 channel receiver with a stable 3-axis gyro system for fixed wing aircraft. The S6R is based on the STM32 platform, which features both receiver and flight control functions. The S6R includes a three-axis gyroscope and three-axis accelerometer, with settings that are programmable via FrSky radios or the PC configuration tool (with FrSky STK). Besides six-channel receiver function, the S6R also has stability augmentation, automatic level, crane, sideward flight, and shutdown functions of conventional airfoils. Delta wing (flying wing) and V-tail models only support stability augmentation, automatic level and shutdown functions.