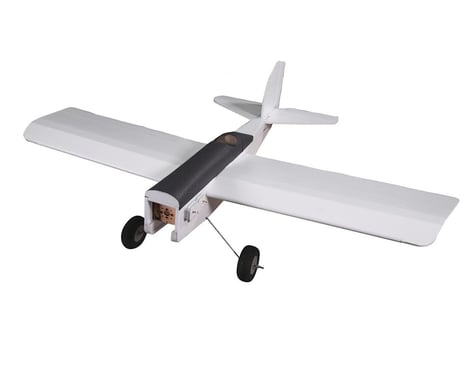 Discontinued Online
Read Reviews Write a Review
Check Store Availability
This item is discontinued and no longer available for purchase. You may want to search our site for a similar item.
Made with the new Maker Foam the Flite Test Simple Scout was designed with the same vision as many of our other Simple Series planes.  A quick and easy build, it's easy to fly and able to grow with the pilot in both skills and features. This Fun Scale WW1 reconnaissance plane carries many of the features that were common on many of the Iconic aircraft of the 1920’s. This makes it easy to paint it up like a wingman of the red baron or as one of its British adversaries. Our goal with The FT Simple Scout is to introduce both a great way to learn to fly and also many fun activities like combat and flying FPV from the open Cockpit.

The Ft Simple Scout makes a fantastic first plane. When built as a beginner model, the Plane only requires rudder, elevator, and throttle to y. This classic 3 channel configuration is both simple and stable for new pilots. Once comfortable with 3 channel, the world of flight opens up with the ability to add ailerons to
the existing wings. As a 4 channel aircraft, the same stable flight can still be experienced, but now aerobatics, flaperons, and all the classic barnstorming maneuvers like loops, rolls, inverted flight, and extreme slow flight. Even with its most advanced setup, the FT Simple Scout will still stall gently with wings level. Our favorite activity with The FT Simple Scout is to install and optional FPV set-up in the open Cockpit. This gives the pilot the satisfaction of flying from the same perspective as you were in the plane yourself without compromising visibility to safely fly.

If you are new to this great hobby, looking for a fun activity with your friends, or want to go back in time with an iconic blast from the past, we hope the FT Simple Scout is a source of many happy memories and a gateway to many future pilots finding success in flight. Thank you for your support and happy flying!

Christopher
Flite Test Simple Scout "Maker Foam" Electric Airplane (952mm)
I’ve built more than ten Simple Scout planes. This Maker foam (white) version is unfortunately awful. The paper isn’t attached securely to the foam and peels off. It’s a lower quality product that costs more. The white exterior requires that you to paint it so that it’s not blinding in the sun and hard to fly, not to mention ugly. That turns an hour build into a two day build, decreasing access to new pilots (which makes Josh’s videos seem disconnected from the actual products). Also the black cardstock (meant to curve on top of the plane) in this version is too thick and doesn’t bend as designed. Please bring back the brown version.
4 of 5 customers found this review helpful.
Lucas Crater
Verified Owner
Flite Test Simple Scout "Maker Foam" Electric Airplane (952mm)
I can’t say enough good stuff about the Simple Scout! I come from 7 years of all plug and play airplanes, never built one. I’ve now built two or three scouts from speed build kits. Biggest advice I’d give, take your time and enjoy the process. You try to rush and the end product won’t be as nice. But don’t be afraid if it looks rough, it’ll still fly fantastic! It barely stalls with full up elevator, and the power pack B on 3s is more than enough power. I fly on a 1300mah and easily get 12 minutes of mixed flying! I would recommend switching to an APC 8x4.7 SF propeller over the props included with the power pack B. They work fine, but it’s kind of torquey on takeoff and in slow flight. And speaking of slow flight, this thing slows down wonderfully, with or without flaperons! FPV is also fun from the cockpit perspective. Aerobatics are a breeze with this thing, and touch and goes are so enjoyable! As far as skill level, if you build it as only a 3 channel, in calm weather, it could be a good first plane. But without ailerons, it doesn’t handle wind to well. With ailerons, if your used to flying in the wind, it’s great! Long story short, build a Simple Scout! It’s a wail of a good time!
2 customers found this review helpful.
Christopher Olson
Flite Test Simple Scout "Maker Foam" Electric Airplane (952mm)
While I cannot attest to the maker foam specific model of this plane, I will say scratch-built and the older brown foam variation of this plane Fly great! The plane itself by design is easy to build, and it performs excellent out of the box! We've crashed and broke the plane in half and within an hour of repair time it's ready to fly again! Slap a C pack motor in it and it becomes crazy overpowered for a novice pilot, and with the simple design there's not as much complications to fixing damage when you are still learning to fly! This is one plane design we've had just work consistently in any of our flight conditions. When I went to make my firs modified custom design, I choose the simple scout to use as the basis of my Bi-plane. (moved mid fuselage wing to bottom, and added upper wing. narrowed lower wing as well)

It's just a great basic designed plane that flies terrifically! Both as a scratch built plane and as a kit.
2 customers found this review helpful.
Doug Maas
Verified Owner
Flite Test Simple Scout "Maker Foam" Electric Airplane (952mm)
This was my first build anything. Impressed with the quality. Confusing for first time builder to find a relevant build video that works for everything. There are several parts on the boards that don't 'jive' with the manual. And difficult to find the relevant build videos. I did some hunting and figured out most of it. Looking forward to maiden flight.
2 customers found this review helpful.
Michael Warner
Verified Owner
Flite Test Simple Scout "Maker Foam" Electric Airplane (952mm)
Great flying airplane, and easy to build! A few notes:
- Make sure to make a good bevel on the leading edge before folding the wing. I did not take enough off on mine and the covering tore near the tips when I folded it.
- The material provided for the turtledeck does not work well in this application. It was a struggle to bend and glue into place, and ended up with all kinds of ugly wrinkles when bent around the formers. Odd, since I didn't have any issues with the card stock provided with the Mini Scout. I would suggest getting some thinner cardstock for this and using the original as a template.
- I didn't have any issues with the white foam other than some minor peeling at the joints (easily fixed with some white glue). FT should include some spare paper overlap on the joints to prevent this, though.
- I mounted my rudder/elevator servos externally in holes cut out in the fuse. Much easier to adjust or replace them this way.
- After having the LG break off of my Mini Scout several times, I decided to go with the rubber band attachment method used on the FT3D. Works like a champ. Will use this on all of the FT planes with LG from now on.
- Used a 2212 920KV quadcopter motor I had lying around with a 10" prop and a 1300 3S. Not much speed, but great pull on the climbs. Very relaxing to fly with this setup, but also capable of decent aerobatics at the same time.
1 customer found this review helpful.
Frank Lawlor
Verified Owner
Flite Test Simple Scout "Maker Foam" Electric Airplane (952mm)
Great plane! This was our first plane. We found it easy to fly!
1 customer found this review helpful.
Gus Geleynse
Flite Test Simple Scout "Maker Foam" Electric Airplane (952mm)
While I've never built the maker foam scout, I would highly recommend this plane for new pilots who are transition from micros to larger models.(not the best choice for a first time plane though, there are better options out there) The build is very friendly for first time builders, and the flight performance is great, it is extremely stable with four channel control making it a great trainer for beginner pilots.(again not the best pick for a first plane) had some torque issues with the three channel setup.(would Highly recommend that you keep it a four channel setup.) It is very durable, although the landing gear could use some more reinforcement. I just put a cut down popsiclestick and put it behind the landing gear, witch helped a little bit. With floats it is not as stable as it is with the regular landing gear. every time I went to fly of of water I had to adjust the trim a lot. I would recommend something else for your first sea plane. but all that aside this kit was worth the wait.
1 customer found this review helpful.
Christian Hansen
Verified Owner
Flite Test Simple Scout "Maker Foam" Electric Airplane (952mm)
My son and I built our Maker Foam Simple Scout from a speed-build kit and the recommend power pack. It flies well, requiring little trimming. It has plenty of power and balanced where the two dots are under the wing. I buddy-boxed it with my 9-year-old son. He has a lot of drone time, but little fixed wing time. He was able to fly the plane with a couple interventions by me. We set up the dual bomb-drop which was a lot of fun.

The build was straight forward but not without challenges. Take your time and don't go too heavy with the hot glue. Make an effort to line everything up when gluing it up. We got one doubler slightly out of position and had to make adjustments for that error throughout the rest of the build. I did not have the foam paper delamination problems others mentioned.

Getting placement of the rudder and elevator servos is tricky. Even after careful placement with centered servos, I had to use the sub trims on my transmitter to get them just right. Using stoppers might be better and/or mounting the servos with their arms on the outside as another reviewer did.

We also had trouble with the heavy card stock used for the turtle deck. It just did not want to bend evenly. Next time I will prebend it over a pipe to try to get a more even, pleasing shape. I found the wire for the landing gear to be hard to bend, and I am a big guy. The motor in the speed build kit I purchased differed from the one in the Josh's build video, as did the configuration of the firewall. I was not sure how to best route the three motor wires. I ended up routing them through a large hole in one corner of the firewall and that worked fine.

I ordered this product in May 7, 2020. They claimed to have attempted delivery on June 2, 2020, but I did not receive any text or call. I have emailed FliteTest twice as the product is being held at a post office but I do not know which one but I have received no reply after TWO weeks.

Don't purchase if you don't want to spend money for nothing!

I will remove this comment if FliteTest addresses this issue.
1 of 2 customers found this review helpful.
View all reviews (10)
Related Products
Customers also purchased...