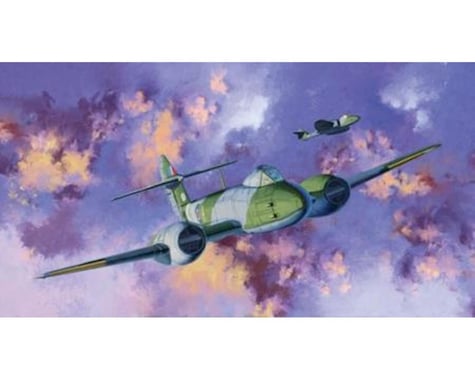 Out Of Stock Online
You may back order this item and it will ship when it arrives.
Be the first to write a review!
Back Order
Save In List

Check Store Availability
This item earns up to 32 VIP Reward Points Learn More
The Gloster Meteor was a British jet fighter whose primary claim to fame was its status as the UK’s very first operational jet. It commenced combat operations in July 1944, and it served with the RAF and a number of other air forces for decades in some cases. The very first Meteor F.I aircraft were used to tackle German V-1 flying bombs, while the F.III was introduced in December 1944. This newer variant had longer nacelles, larger cockpit canopy, increased fuel capacity and it was powered by Rolls-Royce Derwent engines. The greatest problem in WWII combat was that of friendly fire caused by the aircraft looking similar to the enemy Me 262! This problem of misidentification was eased by painting the meteor all white. Although the Meteor was an innovative aircraft in the new age of jet-powered aircraft, it had an appalling safety record of 890 crashes and 450 pilots killed in RAF service alone.

The Cyber-Hobby brand has launched an all-new Gloster Meteor F.III fighter in 1/72 scale. The Cyber-Hobby Original Kit is completely new, and was fully designed using CAD. Based on high-tech drafting and engineering techniques, the fighter’s fuselage is accurately reproduced. The body is a beautiful piece of molding, with the panel lines carefully etched onto the curved surfaces.

To give more flexibility, modelers can elect to display the transparent cockpit canopy either open or closed, with the cockpit sliding on tracks produced with the help of slide molds. The tail rudder can also be depicted in different positions as selected by the assembler. Several photo-etched items such as air brakes add more finesse to the finished aircraft, without being a hassle to assemble. The nose guns also have hollow muzzles thanks to careful molding of this 1/72 plastic kit. The Gloster Meteor was a remarkable fighter jet, Britain’s very first, and Cyber Hobby’s first rendition of it is equally impressive!

This product was added to our catalog on November 6, 2017